A couple years ago, I wrote something called “In Defense of Early Season.” The premise was that even though early season conditions aren’t perfect, skiing is better than not skiing. That concept was front of mind last weekend. It had been too long since I’d skied; I just had to get out. 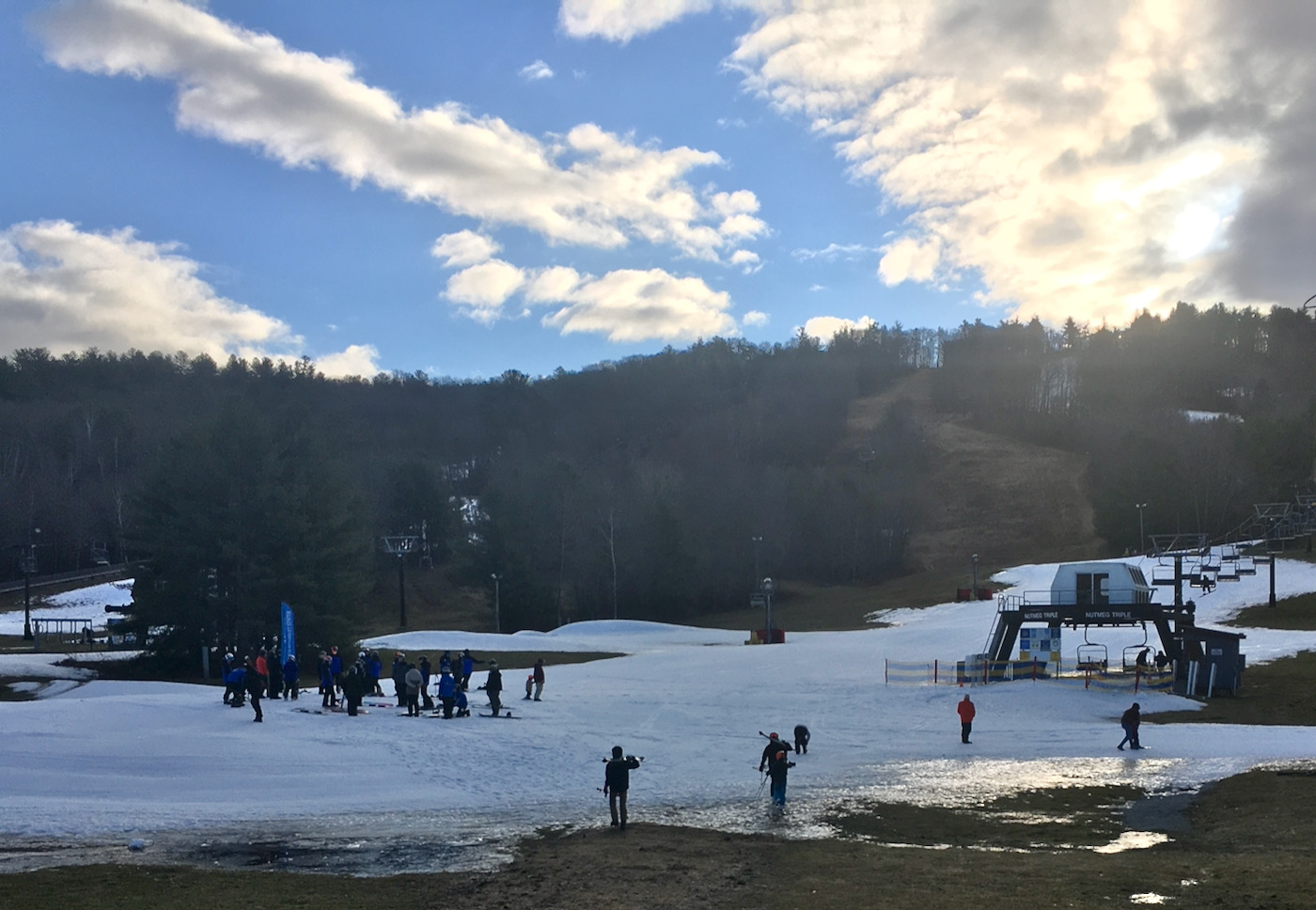 I also wrote about “Skiing in the Rain” in the past but I wasn’t eager to do it again, so we settled on Sunday over Saturday. The warm, wet weather this month has stymied the early season plans of many local mountains. Greek Peak and Mohawk Mountain are both on the Indy Pass and open, so they were options. It didn’t make much difference, considering they would both feature limited terrain.

Mohawk is closer, less than two hours from home, no need for a predawn departure. We got up at a civilized hour and hit the road around 7:15 AM.

Getting to Mohawk is a pleasant enough experience. The route passes lots of old cemeteries, little villages and farms — even a covered bridge. It’s amazing how quickly the New England aesthetic takes over once you cross the Connecticut border. The mountain was still waking up as we arrived. 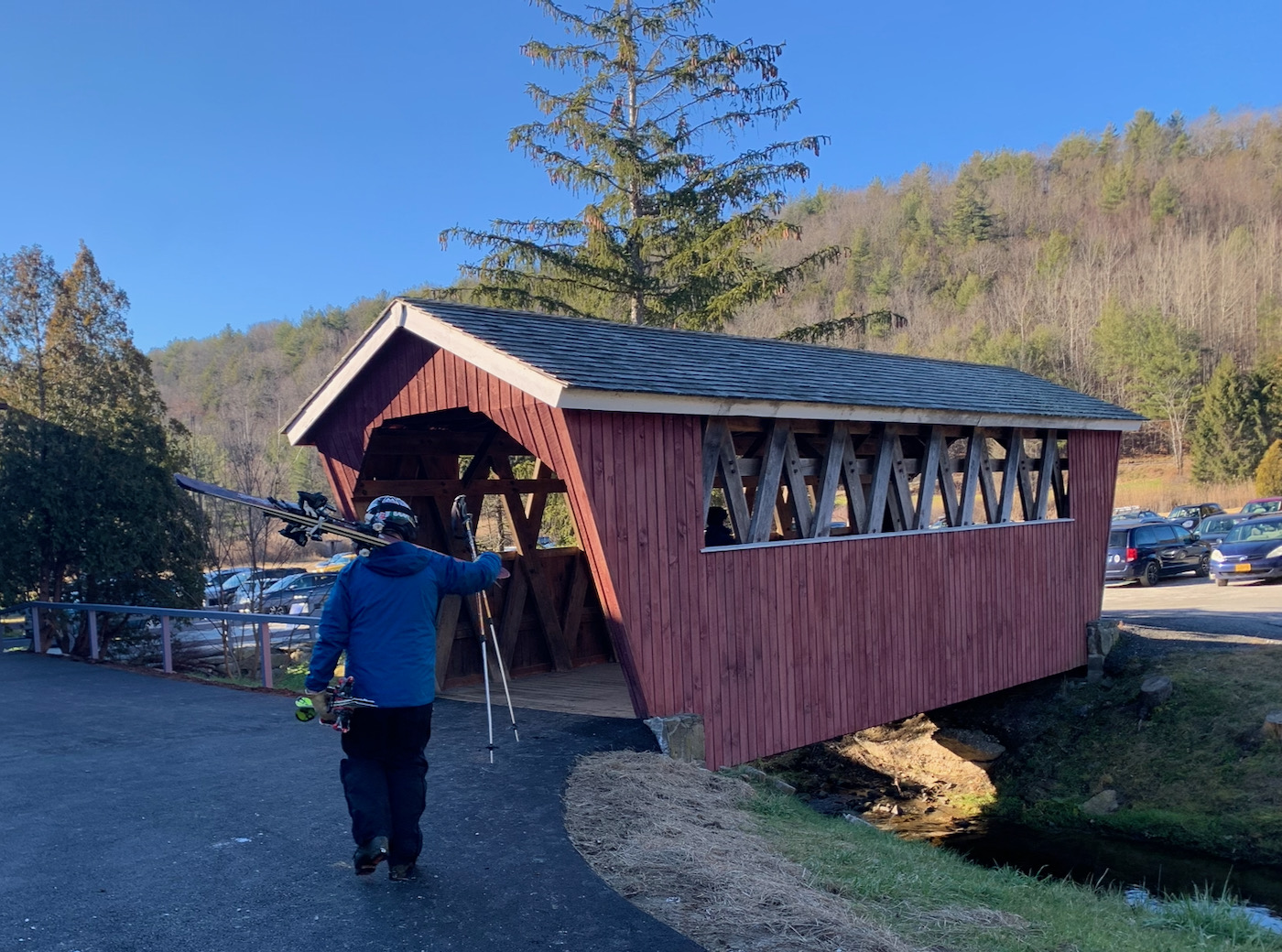 There were a decent number of cars in the lot but it wasn’t full by any means. The boys got a head start on me getting ready while I went for our Indy Pass tickets. It turns out Mohawk adapted RFID in the off season. Another mountain has abolished paper lift tickets.I know this is a small thing but I’m gonna miss wickets when they’re finally gone. Oh well.

I went back to the car to boot up and collect my boys. We shouldered our skis, marched across Mohawk’s own covered bridge and made our way out to the snow. There were two lifts running, one fixed grip triple for the learning area and one going to the top. We rode up to the top of the learning trail to spare ourselves a longer walk to the other lift. Then it was a quick lift ride up to the top. 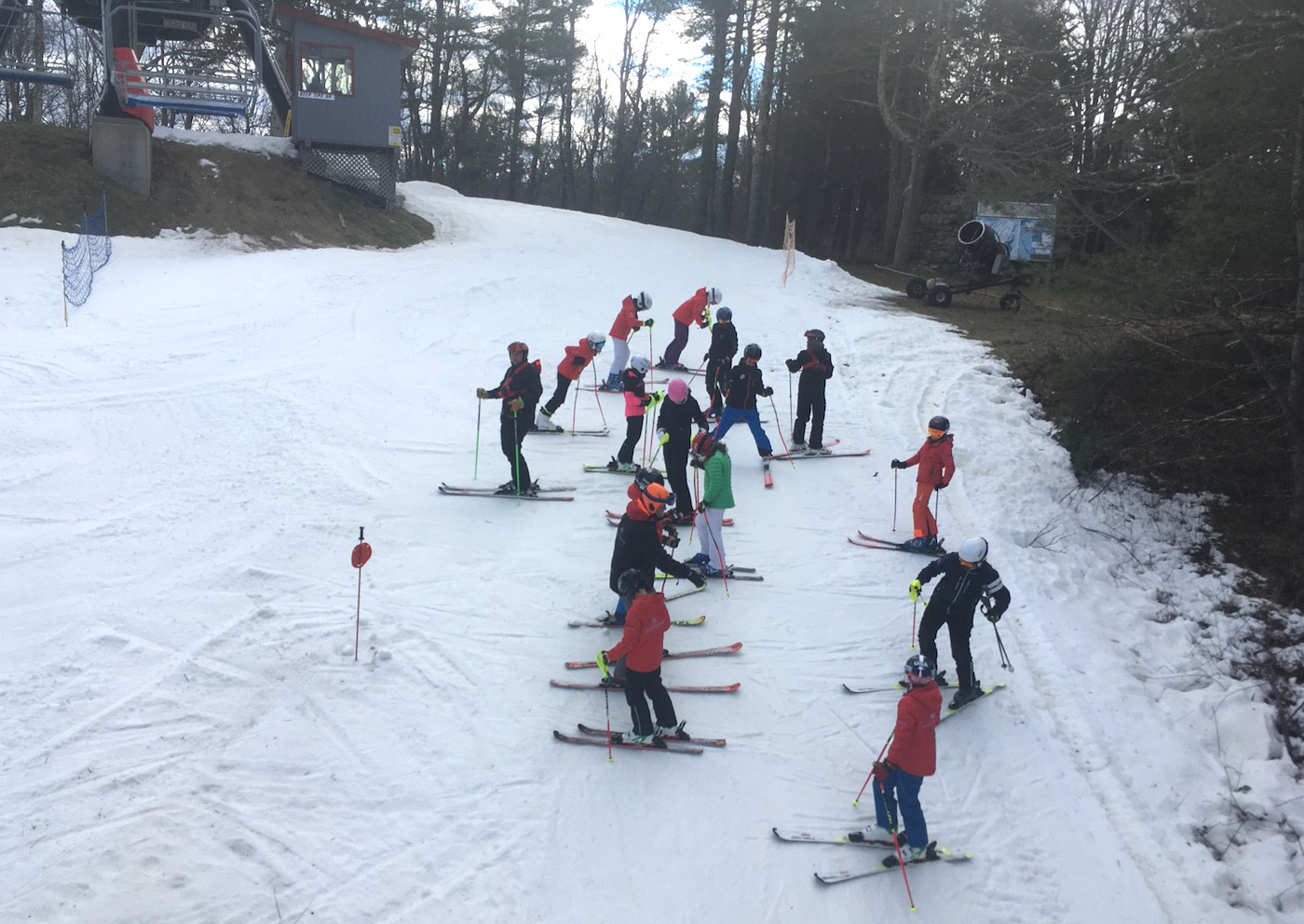 Being on snow again felt awesome. The snowmakers had done a their job well. There was just one way down but coverage was more or less wall-to-wall. I could see where they had tried to make snow on additional trails but there wasn’t enough to expand terrain yet. I was still impressed by their aggressive approach, given how many resorts have yet to open at all.

It was Mohawk’s second week of operation but we could still feel the early season vibe. Everybody seemed excited to be out; the racer kids were already zooming around in a big group, another group looked to be instructors getting checked out by a supervisor and a bunch of patrollers were doing some refresher training near the base area. The season has commenced in southern New England. 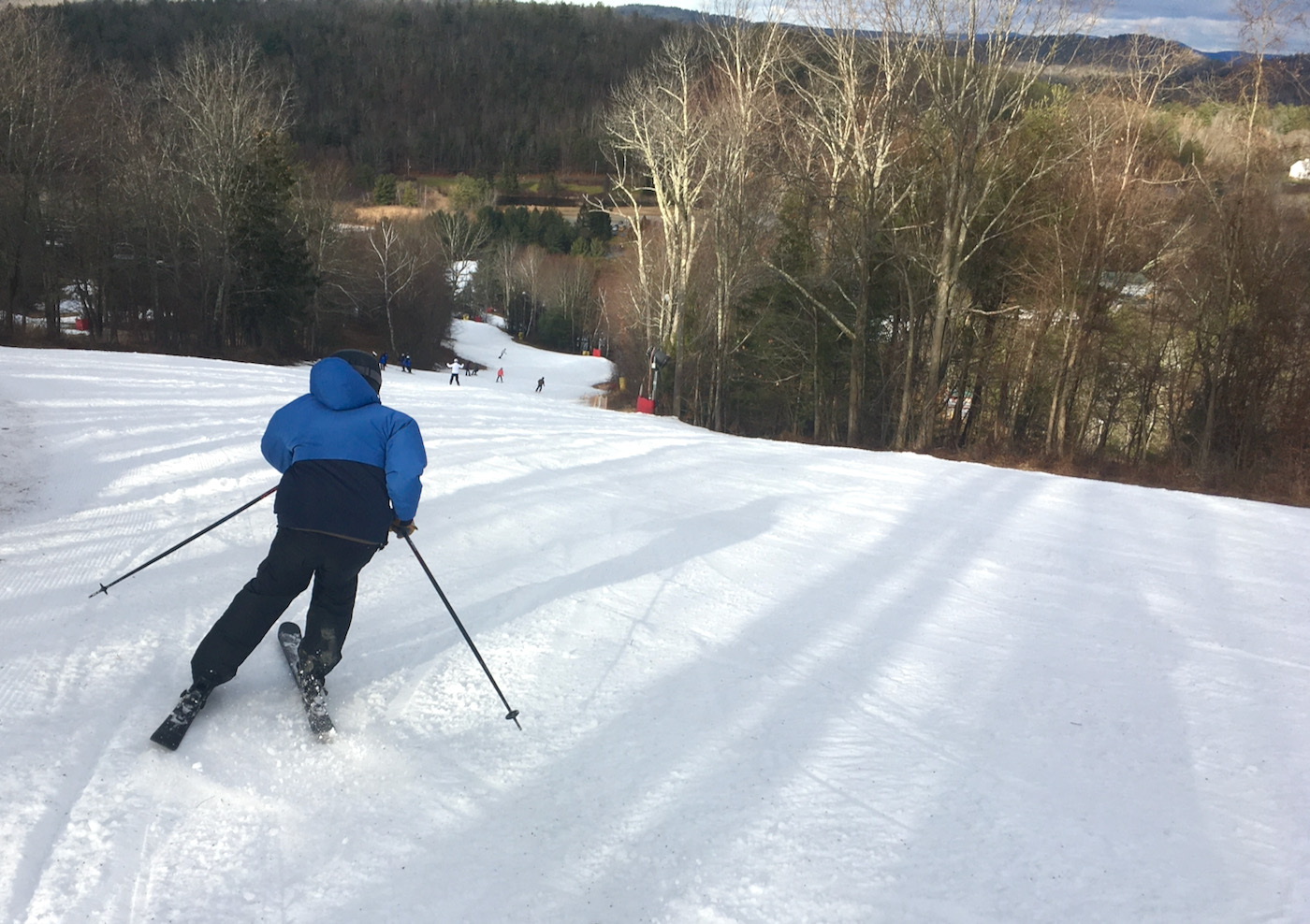 My kids and I had fun doing fast laps all morning. Dangerboy especially seemed to be happy to be back. He somehow managed to grow five inches in the last year. His feet are as big as mine now so I’d set him up with a pair of my boots and some stiff Vokl racing skis we picked up from an NYSB forum member a few years ago.

After our second or third run it dawned on me that he was on higher performance gear than ever before and it showed. He was skiing more aggressively than he used to, mostly keeping up with me and his big brother. Good stuff all around. 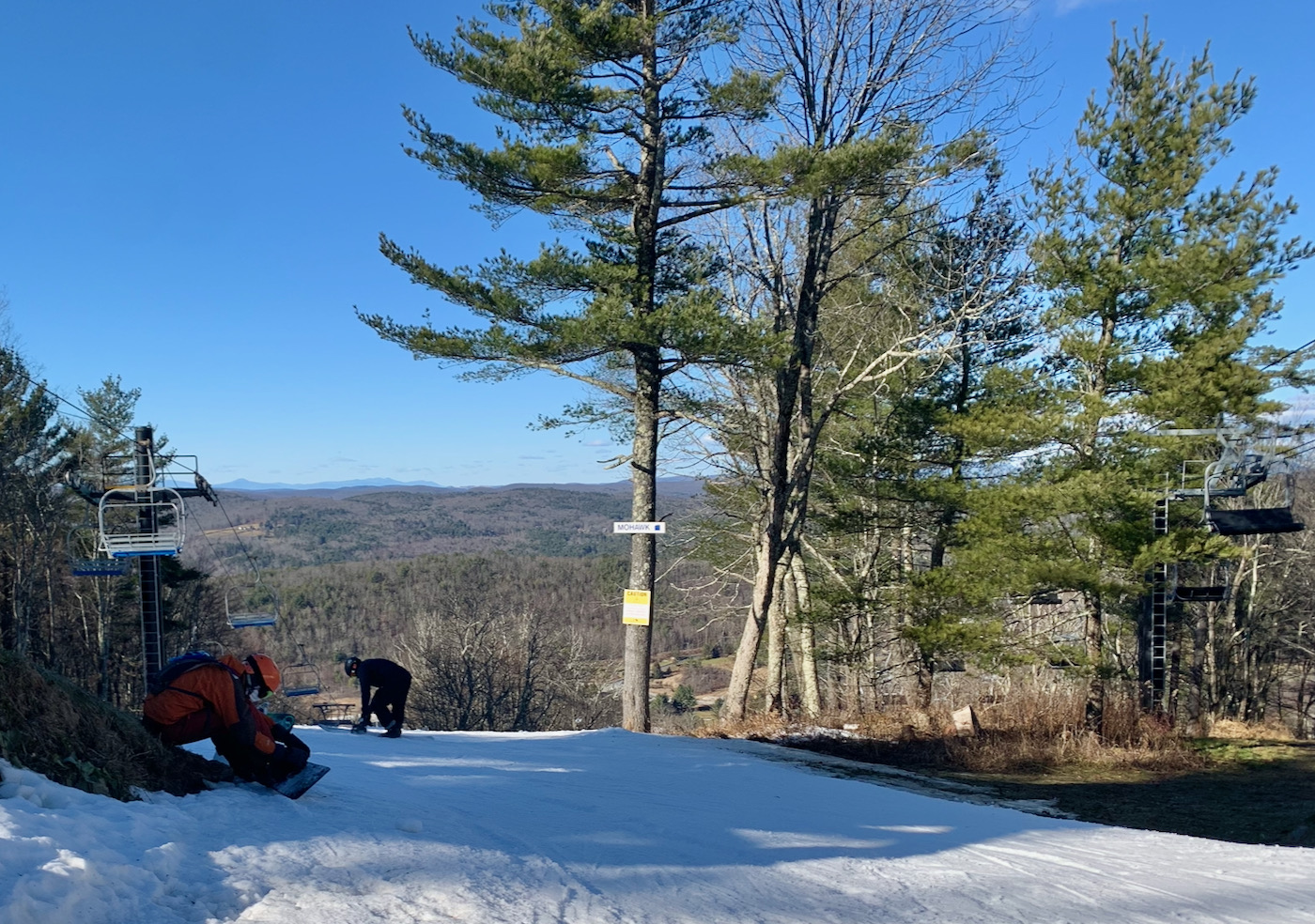 I didn’t feel any pressure to go bell-to-bell. We kept at it all morning and got some lunch in the lodge. After that we did a few more runs from the top and then hung out in the learning area for a while, just fooling around. We practiced skiing backwards and skiing on one ski. We climbed a snowmaking whale and slid down the other side. Once we’d run out of ideas, we packed it in and headed down to de-boot.

As I walked through the lodge, I could smell chocolate chip cookies baking in the kitchen. Overall it was a really fun first day of the season. Full steam ahead.