Long time readers might remember that I spend a lot of time recreating around Silvermine Lake in Harriman State Park. In the past I’ve written about taking my kids to explore the ruins of the defunct ski area, using the still-skiable trails to fool around with touring gear in the winter and as a spot for an easy loop hike around the lake, utilizing a portion of the Appalachian Trail and the CCC era Silvermine Ski Road. What first drew me to the spot though was the lake. 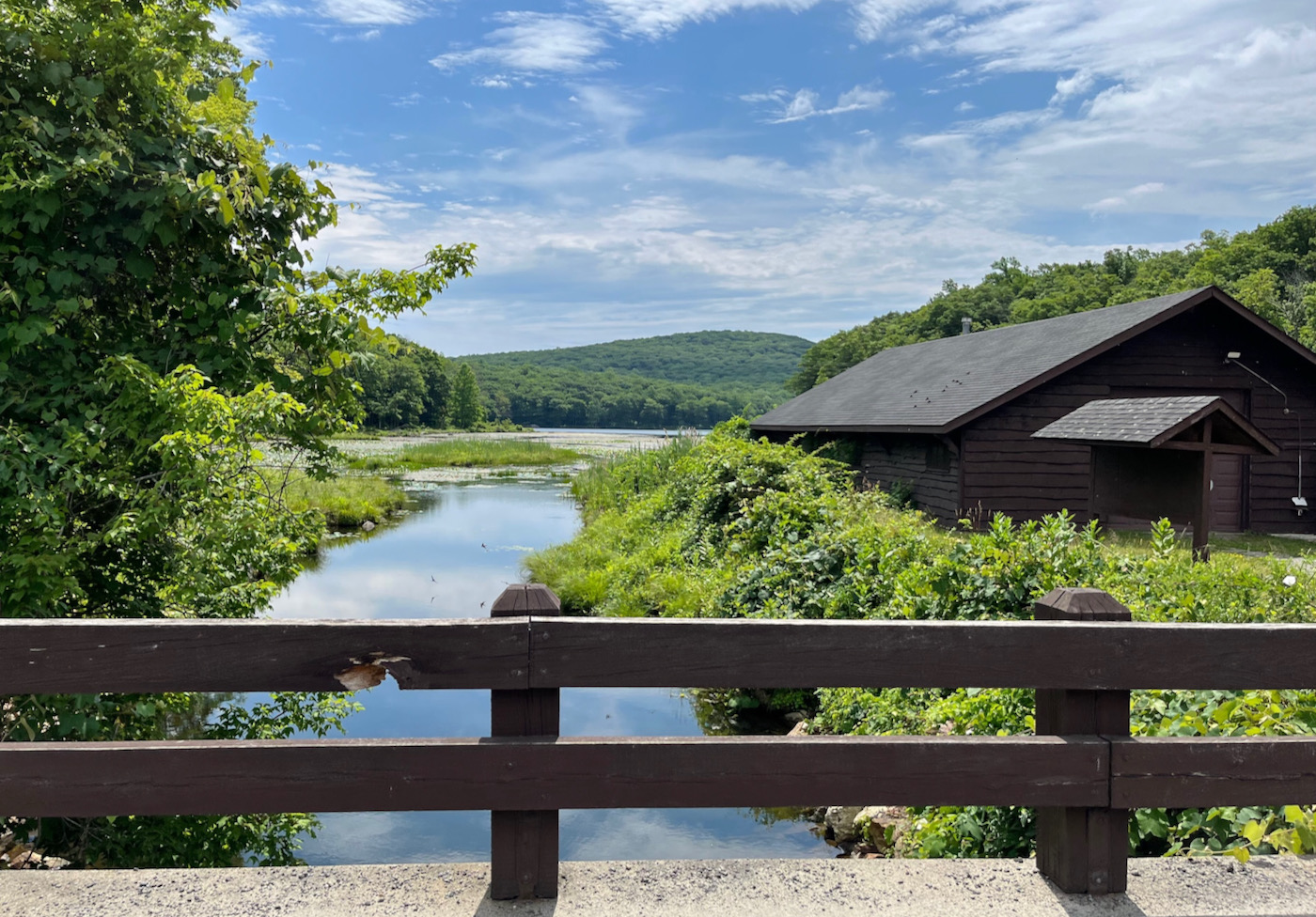 It’s not a big lake and doesn’t offer anything challenging but it’s still a cool spot to paddle a canoe or kayak. What sets it apart from most of the other lakes in Harriman is that there are no camps or picnic areas directly on its shores.

A buffer of trees between it and Seven Lakes Drive give it an exaggerated feeling of remoteness missing from other paddling options in the area.

I’ve paddled there several times this year, most recently with my two sons on a sunny Saturday afternoon. We drove past the crowded parking areas for Tiorati, Sebago and Kanawauke to find Silvermine’s relatively empty gravel lot. Paddlers are allowed to drive across the little bridge at the bottom of the lot in order to avoid a long carry from the parking so I went ahead and steered around the barrier and parked next to the water. 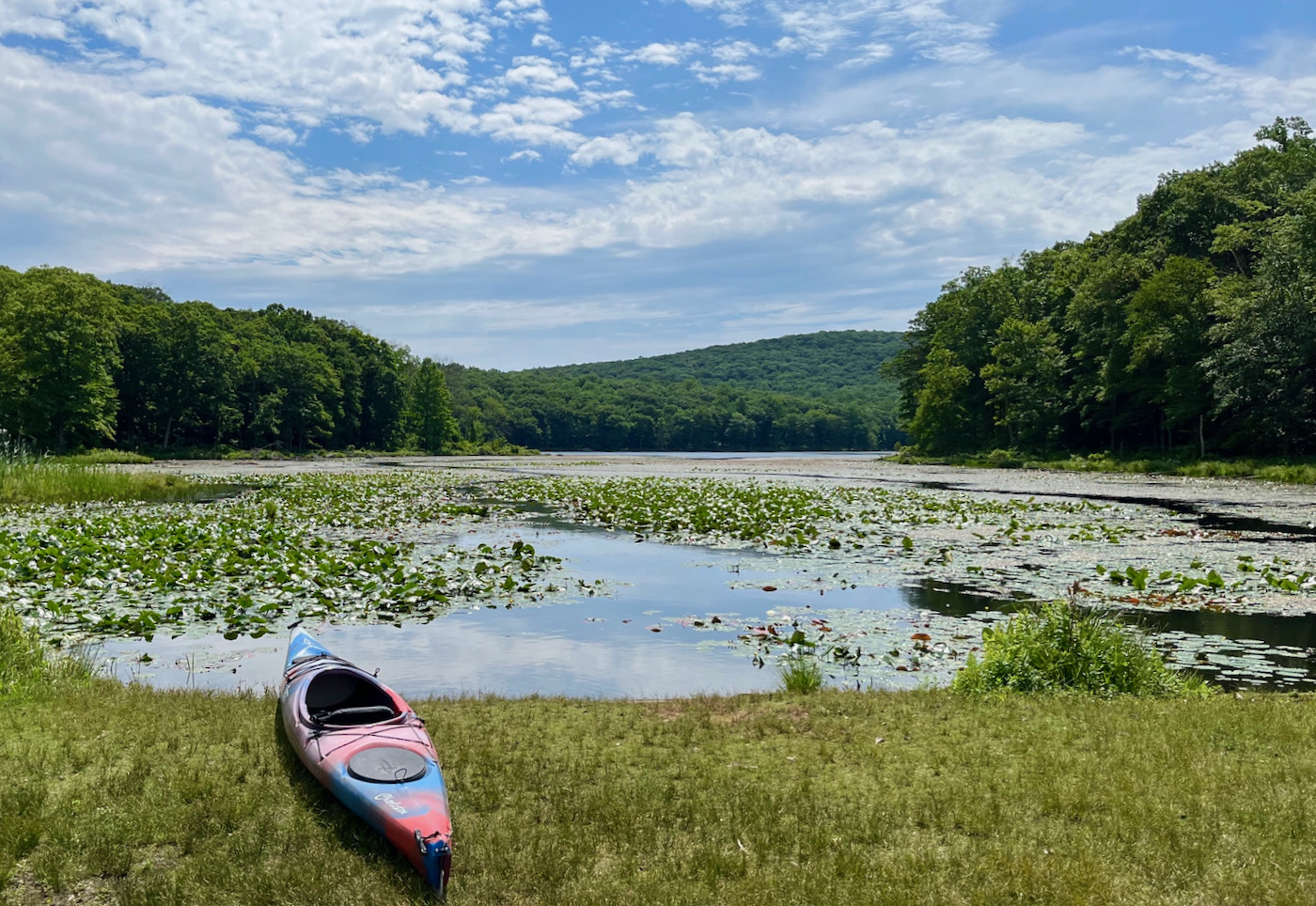 We got the kayaks off the top of the car and unloaded our paddles, PFDs and the seats for the sit-on-top tandem. Then I moved the car back to the parking area. By the time I got back to the water’s edge, the boys had everything ready to go.

I was surprised when Dangerboy expressed a desire to take the single kayak himself. I agreed and helped him launch. He took off down a channel in the middle of a field of water lilies. Junior took a few minutes getting sorted out but he and I were on our way in the tandem soon after. 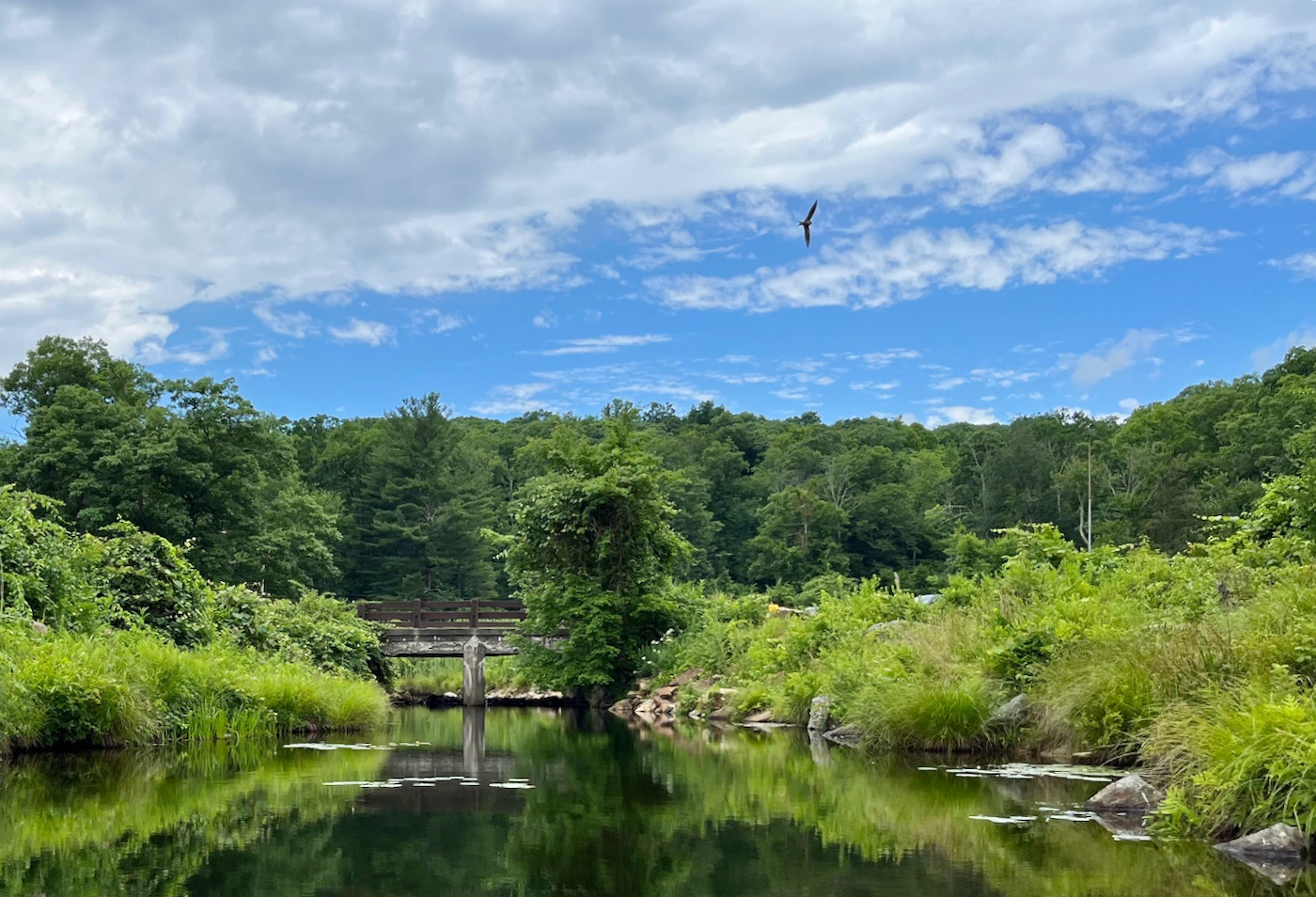 We overtook Dangerboy quickly. After a good start, he either ran out of steam or got distracted. Junior and I picked our way through the water lilies and turned right to paddle away from the road towards what I think of as the backend of the lake.

We spotted some turtles on a rock and some Canada geese. The Appalachian Trail follows the shore line on that side of the lake but it’s far enough back in the woods that you don’t notice it. Junior and I paused near a little bay at the far end of the lake to let Dangerboy catch up. When he finally did, we had a quick conference and decided to shuffle positions a little. Junior slid back to the rear seat of the tandem, I took the single and Dangerboy moved to the front seat of the tandem. 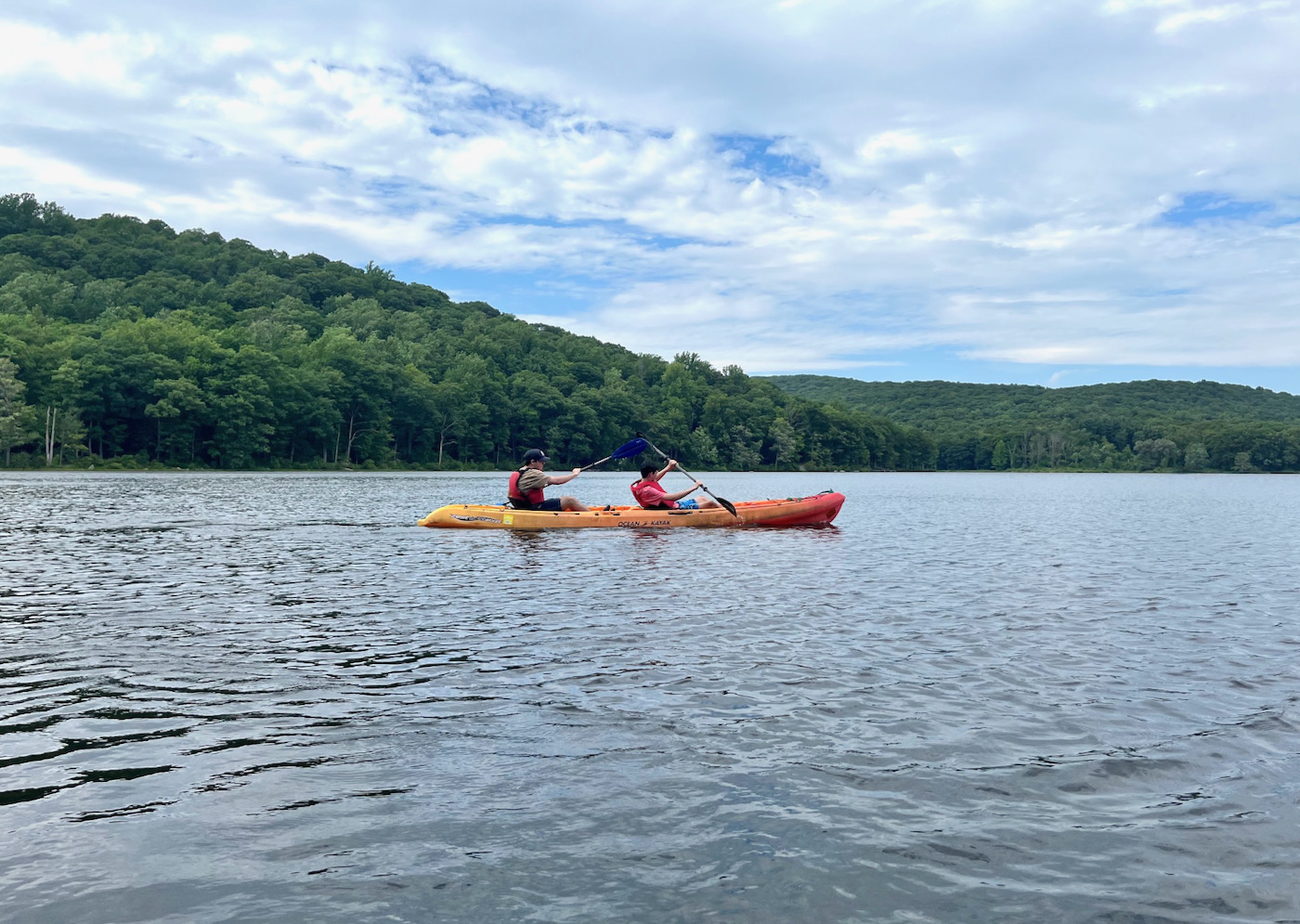 With our new seat assignments we moved on, more or less together. It was fun watching the boys try to keep their paddling in sync, some times successfully, sometimes not. It’s harder than a lot of people expect. They didn’t stay perfectly in sync but I didn’t hear any contact between their paddles.

I hugged the shoreline, following it north and then west, towards the dam that has contained Silvermine Lake since its construction in 1934. At that time, what was known as Bockey Swamp became Menomine Lake, which means “wild rice”. In 1951 the lake’s name was changed to match the that of the Silvermine Ski Area on its southern shore. 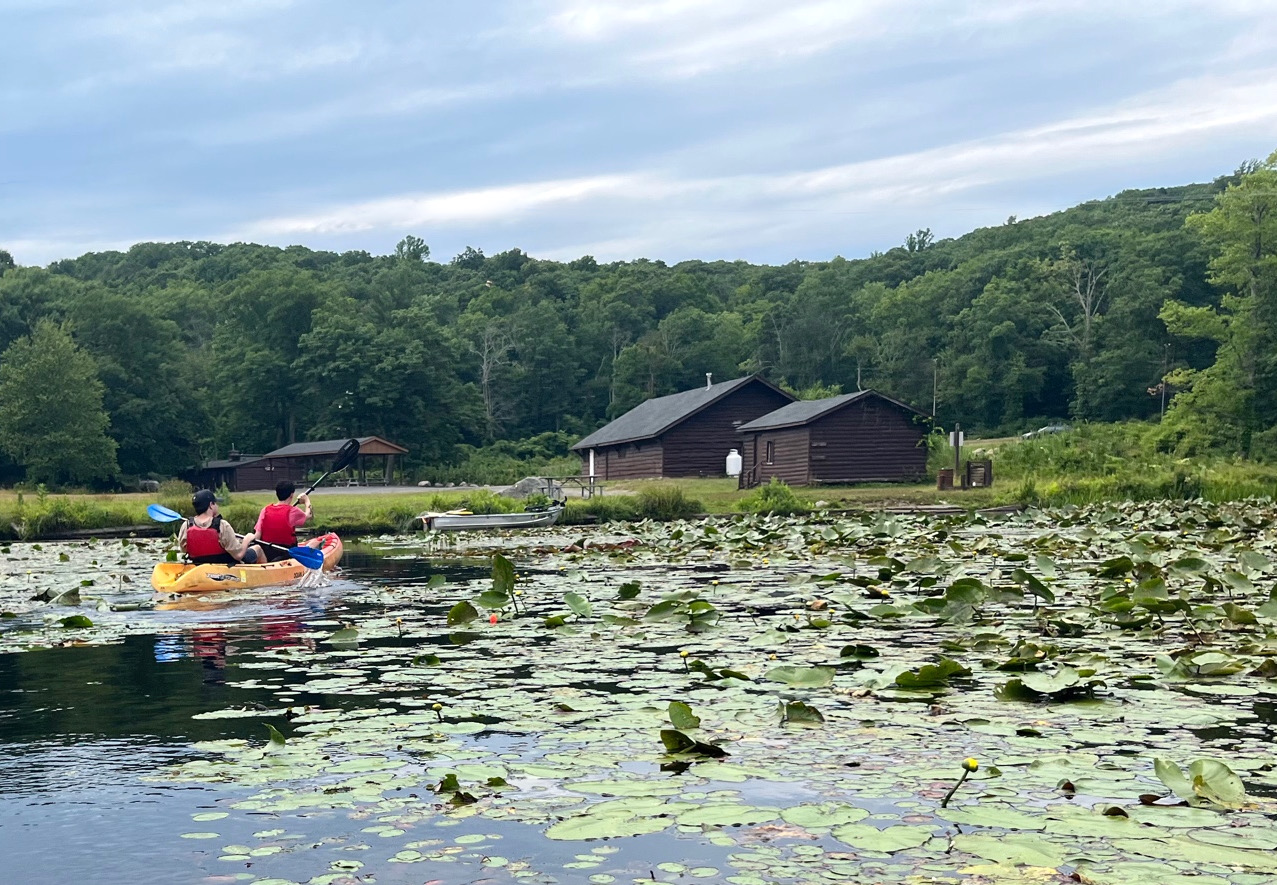 We lingered around the dam a little. Unusually, I found I could paddle right up to its edge without any danger of sliding over. The boys didn’t trust my judgement on the matter and stayed well back. They seemed to have gotten their full of kayaking for the day so we headed back, passing a couple campsites (wall tents rented out by the glamping site Tentr) on the way. Then we laced our way back through the water lilies, past a big beaver lodge to our takeout at the bottom of the old ski slope.

We were probably on the water for less than two hours – I wasn’t keeping track. It was a nice mellow afternoon paddle, no big deal. The next day or so I posted a 13 second clip of the boys paddling the tandem on Instagram with a couple Harriman related hashtags. To my surprise in a few short hours, it had garnered several thousand views. 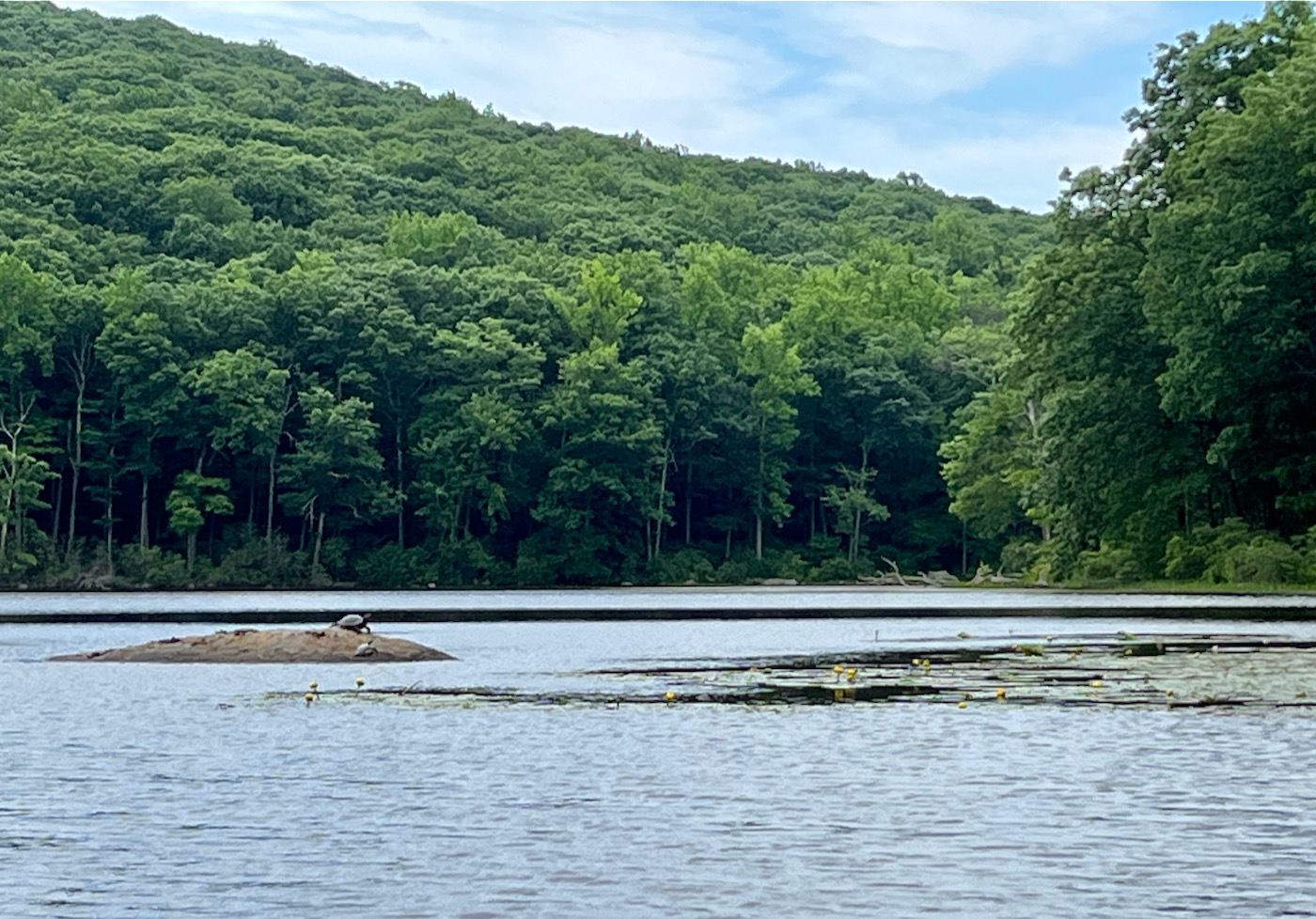 I was a little gobsmacked. I am not much of an Instagram’er. I post pics from skiing or paddling trips all the time but normally a hundred or so people might look at a post, with maybe twenty hitting the like button. As of this writing, the silly little video has been viewed over 5,100 times. I guess I’m not the only that likes Silvermine Lake.