On a summer day in 2010, I was in Mike Pratt’s office, learning about plans for Burnt Ridge. The Gore GM had a drawing of the area on his desk. It was a topo map, all in done in black, except for one trail, drawn in red pen. It was labeled Barkeater. 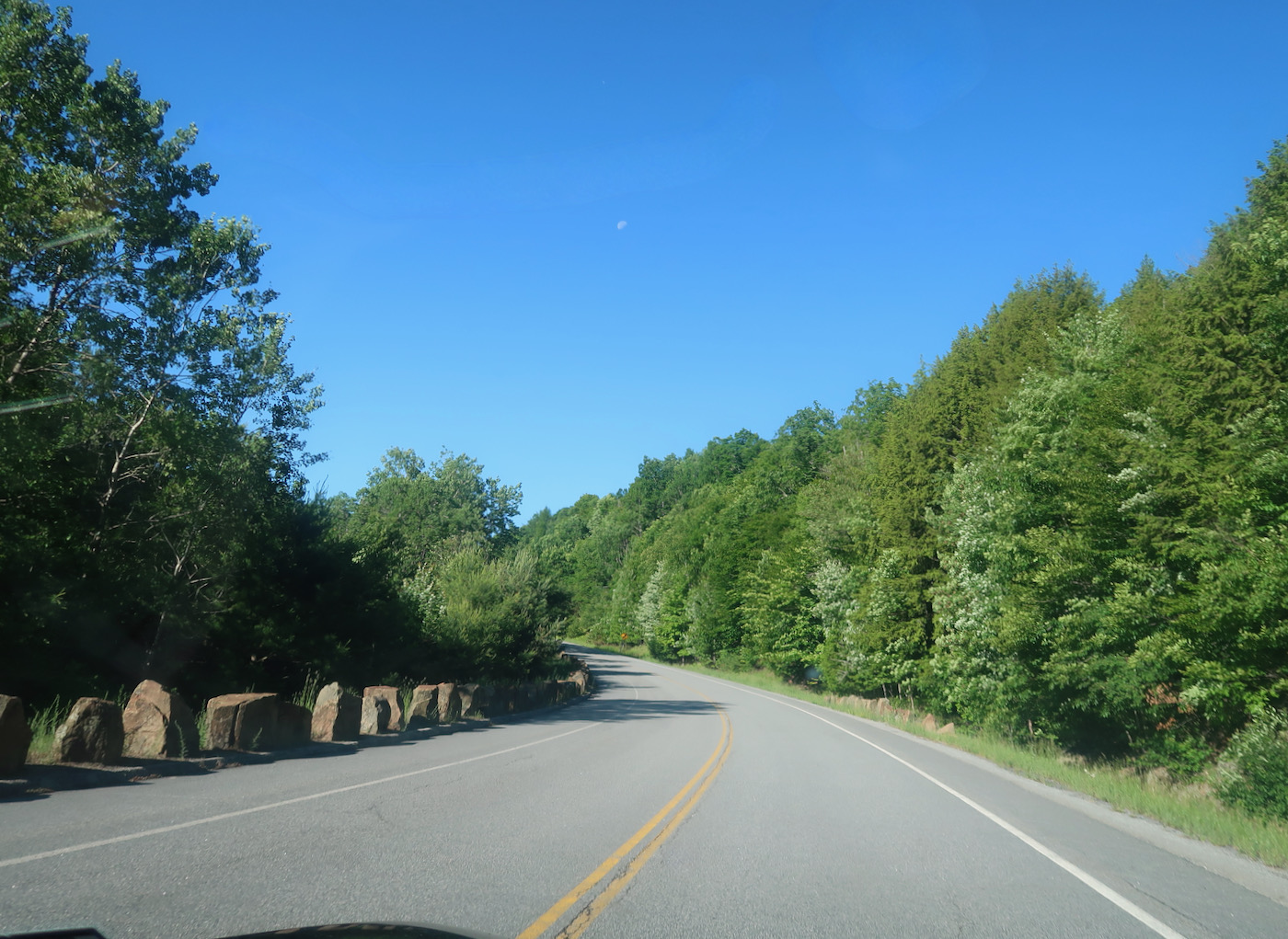 Mike told me that the trail wasn’t going to be cut right away, for the time being it was being cleared as a glade.  Over the years Barkeater, and all the glades on Burnt Ridge, have become classic favorites among skiers who thrive in zen-long tree runs with moderate pitch. Some of us, likely a minority, loved Burnt Ridge the way it was: a bit inaccessible with a beautiful high speed lift and four mile-long glades.

I think we knew that this unique pod couldn’t last, in that configuration, forever. Still it survived for 15 years in it’s original semi-developed state.  Now, the announcement of the construction of a new lodge for the Ski Bowl, has pushed intermountain connectivity far up the priority list, and Proposed Trail 11M is finally being cut.

Generally ski mountains cater to families, and this is as it should be. Still, those of us who love the unique nature of Burnt Ridge have long hoped that the additional trail would leave the best tree skiing in place. When I learned about the construction of the new lodge during the season, I reached out to Bone Bayse, the GM at Gore. He’s another skier who loves the glades on Burnt Ridge. I wanted to see if he, and I, and the master plan were on the same page.

On a sunny Sunday, we met in front of the base lodge at 8am, to walk the new trail and check out the layout.  I saw a lot to like.

We took an UTV up the Sunway work road to the Saddle, then we headed down Twister, and up that work road, to the top of Burnt Ridge. We parked our vehicle near the NYSEF warming hut and walked across the flat area on top of the ridge. We could see two big excavators, dormant on a beautiful and sunny Father’s Day.

The start to the new trail is right where the entrance to the Barkeater Glade used to be. Gulp.

Bone pointed down the trail about 60 feet to a red flag attached to a tree on the skier’s left side of the trail. “That’s the new entrance to Barkeater.” I wondered if Bone was surprised that I was more interested in Barkeater than 11M itself.

I scrambled through the dirt down to the new glade entrance. It was just as I remember it, the only other time I walked this route in the summer. For the first 100 yards or so, the new trail was in sight of the glade, but then the two routes diverged, so I cut back through the woods to meet up with Bone back on the trail.

We headed down, following the contours of the new route, climbing over the slash in spots. The farther down we dropped, the more rugged and unfinished the trail became. At around 2600 feet, the clearing ended and we ducked into the woods to continue along the flagged route.

In some ways it was easier walking through the woods than on the trail. We dropped down further. Up until this point the terrain was relatively gentle.

At 2400′ the trail moves close to the glade again, in an ideal spot. If you ski Barkeater, you know that it starts with a long gentle pitch that seems to go on for quite a while.  Then, you come to a sharp left turn that leads to the steepest part of the run.  It’s right at this point, that you’ll be able to bail back onto the trail.

This does two things. First, if cover is thin, you could enjoy the fattest part of the run and skip the sketch. The upper part of the glade could potentially be open more often. Second, it would make “Upper Barkeater” a great piece of learning terrain, for intermediate tree skiers.

At 2300 feet we came to two ledges that will require some blasting for the trail to maintain a blue rating. We circled skiers right around these ledges and then dropped down to the power lines, crossing just below the spot where you cross on skis via Barkeater. Past that point, we crossed Barkeater for the second time. That prime section of the glade — from the entrance to this spot — covers more than 4300 feet and 620 feet of vertical.

The bottom line: unless something changes dramatically on the flagged route, 95% of the best part of Barkeater will survive.

We came out at the pipeline, where, conveniently, there was another UTV waiting. Then up pipeline to the reservoir. Bone showed me a huge amount of rock piled up along the side of the pipeline traverse. It all came out of the far end of the reservoir in 2020, nearly doubling capacity.

From there we drove up to the North Chair to inspect the new steel pipe that is a crucial part of the project.  The snowmaking upgrade on Burnt Ridge has two parts. 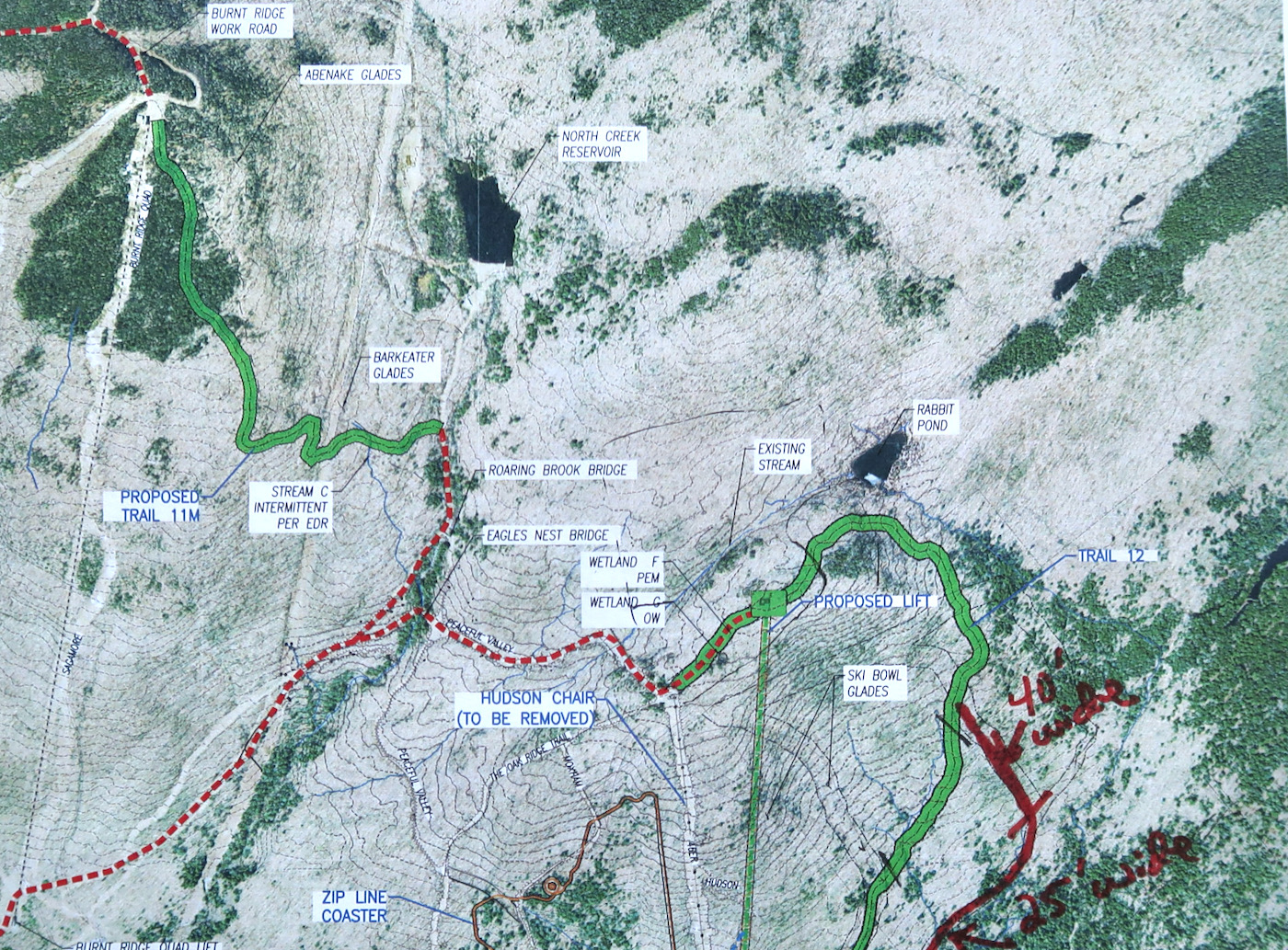 First is the pipe that will run along the new trail. There’s also a separate larger pipe that will increase total water capacity from the reservoir to the top of Burnt Ridge. This upgrade gives Gore the ability to blow on two trails at once in the pod.

I’ve made some bad predictions in the past, notably when I walked Cedars from the Gore base area in summer and declared you wouldn’t need to skate too much to get over there. Regardless. I think finishing Burnt Ridge was the only path forward, an improvement most skiers will love.

Full disclosure: personally I accepted what happened on the Dark Side as both necessary and sad. I don’t see this in the same way, it seems more win win to me.

What do you think? Hand it out below.

16 comments on “The New Trail on Burnt Ridge”