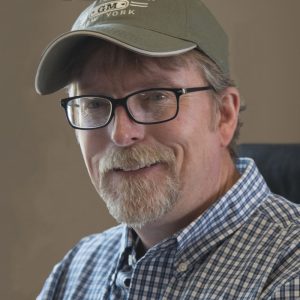 There was a lot of excitement in North Creek this summer when Mike Pratt, the General Manager at Gore, was appointed the permanent head of the Olympic Regional Development Authority and James “Bone” Bayse was appointed to Gore’s GM position. We asked Bone if he’d be willing talk to us and he graciously consented.

NYSkiBlog: When did you first come to Johnsburg? What brought you here? What keeps you here?

Bone: I had spent some time in the area trying to find work marching in Bicentennial parades, it went pretty good for a while, but that dried up mostly after 1976.

I had been in and around Johnsburg, but I guess really moved in for good in the early 80’s. Some folks might think that rafting and skiing is what brought me here. The truth is that skiing and rafting keep me here.

I started skiing pretty young. My parents were not skiers, but they went ahead and got me this set of Sears and Roebuck wooden strap on your boot skis for Christmas one winter, and I was hooked. I’d spend hours and days in the woods exploring. Eventually I talked my folks into some “real” skis and they started dropping me off at different ski hills.

I don’t remember the first time I skied Gore, though I do remember coming to work there. I had been working at Oak Mountain in Speculator, several of us heard that Gore was looking to hire and to Gore we went.

We know you’ve been instrumental in developing the NYSEF program, have you had other jobs at Gore?

When I first came to Gore, I worked the ski school for a couple of winters, then on to NYSEF.

What about Gore would most surprise people who don’t work there?

When we are up and running it’s like a small city. People seem surprised that we have our own waste water plant and power substations. That’s not too exciting, but it does surprise people.

I like variety, so my favorite trail keeps changing. Currently it’s Boreas Glades.

Outside of NY my favorite area is Mount Bachelor. It not only has great skiing, but in a 20 minute drive you can be in Bend exploring some of the finest brewpubs known to man.

If the state gave you $20 million next spring to spend on capital improvements in the off-season, how would you spend it?

First thing would be to upgrade our snow making pumphouse. Every year we are seeing more swings in temperature, with shorter windows of time where we can make snow. We need to be able to pump more water faster during these smaller temperature opportunities.

After that, I’d like to continue with our lodge upgrade momentum and do something with the base lodge. We need more space, bathrooms and amenities for our guests.

Right behind that we need to look at replacing our two oldest lifts, the Sunway and High Peaks chairs. We do also need to get fully into the summer business.

Some feel that Gore needs to be “better connected” allowing easier movement between pods. What if anything can be done?

There are a few spots that the flow between pods could get better. I’ve been spending time studying this to see what can be done. I think we can create better flow from Burnt Ridge to both the base area and the Ski Bowl by adding a couple of new trails in key locations. I also see opportunity for a different route to the Ski Bowl from the bottom of the North Chair, one that will keep you sliding.

Twister and Echo are obviously a crucial part of the racing program. They are also key trails for the skiing public affecting connectivity. Is there any way to satisfy both groups?

You’re correct, Twister and Echo are important to the race program, and equally important to the skiing public. Can there ever be common ground between the two groups? Yes I believe so. I have been doing some behind the scenes work on this very topic over the summer, that will enable us to make the necessary changes not this winter, but in the near future.

Now that Echo has been homologated, can we lure Mikaela back to Gore to put on a clinic?

Mikaela Shiffrin is on track to be the best in the world, I don’t mind reaching out to her but suspect her dance card is full this winter. Olympic Gold Medalist Diann Roffe-Steinrotter is a frequent visitor at Gore, I’m sure she would give you some pointers!

The new lodges have gotten a lot of attention this year and rightly so. Are their other improvements to tell about?

You’re right, it been all about the lodge improvements. What did not get enough press, was that our crews went through all 28 glades, cut, brushed and ready to go! We also spent time with engineers designing improvements to the snowmaking system.

That’s great news about the glades. Are there plans to install a webcam at Gore?

Yes. I have our IT folks looking at the best location, though I keep thinking someplace at the top of the gondola, or maybe the top of lift #1. I hope to have it going just after the first of the year.

What is the biggest challenge Gore faces over the next 5, 10 and 20 years?

These things have to happen, while working to protect the state land that we operate on.

If you had a month of vacation that you had to take, and money was no object, what would you do?

I would go on tour with my folk rock group BONEDOCTOR. This would get us one step closer to world domination. #BoneDoctorWorldTour

What music do you listen to? If you were driving cross country and could take 5 discs with you what would you choose?

When did you start guiding on the Gorge? Are you going to be able continue to guide on the river?

I started guiding on the Gorge in the fall of 1986. I do plan to continue guiding, though it probably won’t be as often as in the past.

What, to you, makes Gore unique?

Gore has something for everyone. It’s a big mountain and you can find uncrowded terrain even when there are 7,000 people riding our lifts.

Thanks a lot Bone. Good luck for a great season.