“We’re not here for a long time, we’re here for a good time” my father would joke, in the days before he passed, just a few years ago.  He was known for having a good time. After his passing I decided to up my game. I committed myself to getting out on at least one big trip a year, on the longest days of the year, to test myself. 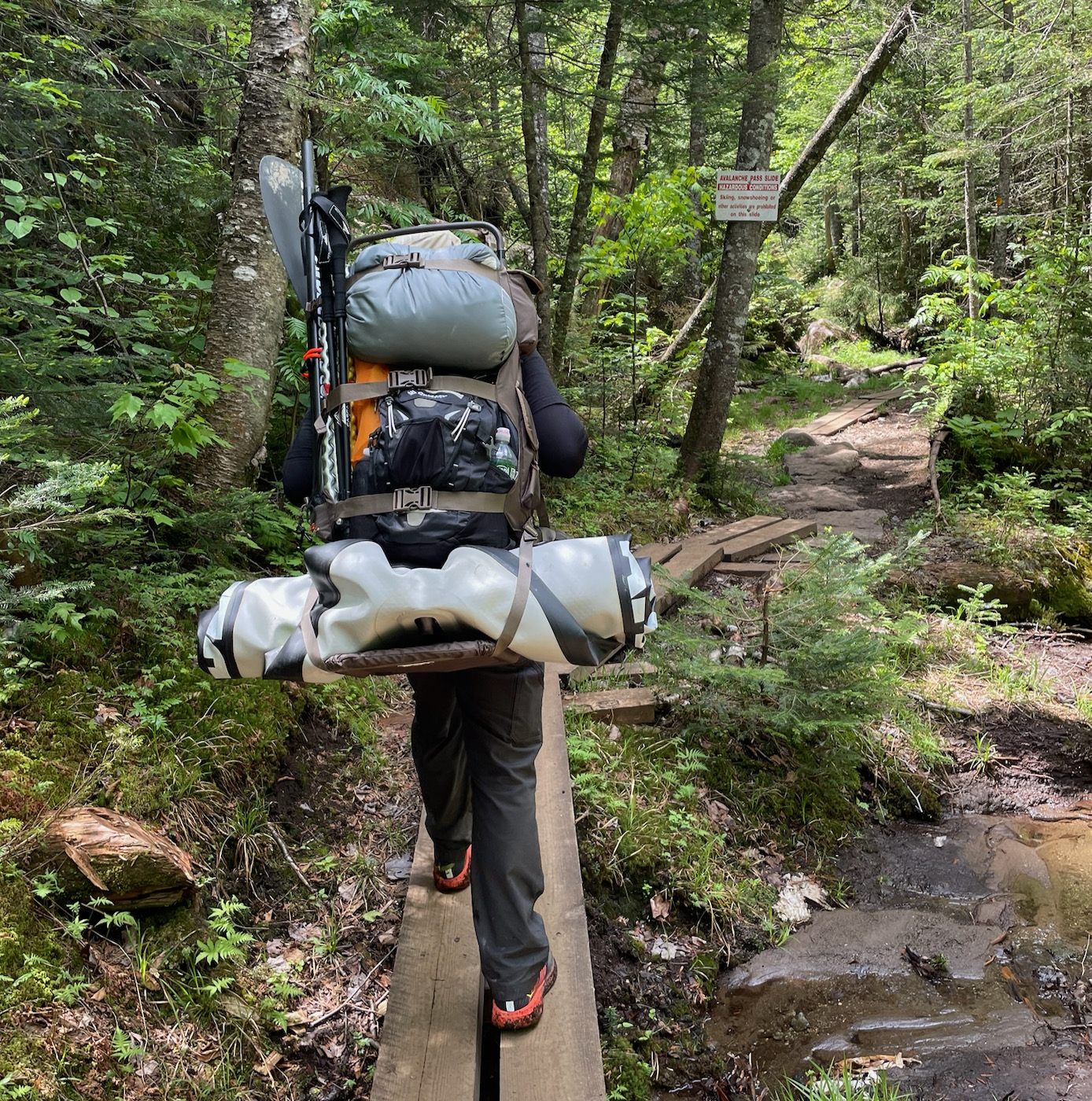 A celebration of life and light with some type 2 fun mixed in. In 2019, I convinced two close friends, Freebird and Grapestomper, to traverse the 20+ mile Adirondack High Peaks Great Range Trail on the summer solstice.  Known as one of the hardest day hikes in America, it certainly lived up to its reputation.

Two years later, again on the solstice, Freebird and I along with Powerman tackled the Catskill’s 24 mile Devil’s Path in a day and we crushed it. Feeling good after a year off, we were back at it again, back in the High Peaks.

Powerman has been a good friend since junior high, over 30 years ago. Recently his father passed away too, his ashes spread in a private Adirondack pond that he loved dearly.  He was an avid outdoorsman and spent time with his son fishing and canoeing, teaching him to appreciate all that nature has to offer.

The High Peaks were new territory for Powerman. With Freebird running the Great Adirondack Trail Run and Grapestomper visiting friends in Iceland, it was a good opportunity for the two of us to get out into the wild.

“I’m ready for something juicy” said Powerman as we headed north on the Thruway. “Oh, it will be” I laughed. The plan was for a two day, two night, paddle-scramble-hike to the summit of Mount Marcy.  First up was a good night’s rest at the beautiful Barkeater Inn, a perfect place to launch from Keene. The innkeeper, amused as we sorted gear late into the night, graciously loaned us a bigger bear box.  We definitely weren’t going to starve to death.

We didn’t quite get an alpine start. It’s rather difficult to remove yourself from those sinfully comfortable down duvets. After powering up with their trail breakfast, we were on our way to the ADK Loj. The parking was already full on a busy Saturday so we headed for the Klondike parking at the end of South Meadow Road and avoided the crowded trail. After more gear sorting we lifted our ridiculously heavy packs.  With food, clothing, shelter, and inflatable paddle boards we started our march up the Marcy Dam Truck Trail to Avalanche Lake.

“The trail through Avalanche Pass is probably the most spectacular route in the Adirondacks.  Sheer rock walls rise directly out of the water on both sides of Avalanche Lake”

It is truly spectacular.  We pumped up our boards and readied ourselves and cargo.  We paddled across the inky depths admiring the cliffs as we floated along.  The perspective from the middle amplified the lake’s dramatic effect.  It also gave us a sneak peek into the next day’s mission, the legendary Trap Dike.  Once on the other side we made camp at the primitive site a few hundred yards from the beaver dam at the outlet.

The plan was to then shuttle the boats the 1/2 mile to Lake Colden and fish for its elusive comeback trout.  We decided instead to go without and hiked around the lake to visit the Beaver Point Lean-to.  Recently moved and renovated by the volunteers of Lean2Rescue it has a new home in the woods.  We then went to chill for a bit at its original site on the shoreline.

A few casts with a pack rod from the boat launch at the Interior Outpost yielded nothing. As I tied on a fly, we laughed and watched fish jump out towards the middle, which immediately cemented a return trip. A few more bow-and-arrow casts in the Cold Brook and we headed back to Avalanche lake for an early dinner.  This area is known for bears.  It’s best to be off the trails and have your cooking and meals and everything washed up before dark.

After a feast, we loaded and hid the bear box hoping they wouldn’t find it and use it as a soccer ball.  As we watched the daylight fade a few hikers came passing through.  They were doing the Marcy circuit and were on their way back to the Loj.  “If you have headlamps you’ll be fine” said Powerman.  “No” was the reply, so we wished them “good luck.”  Ahead of them, were the jumbled boulders and ladders that skirt the lake.  Often referred to as the Misery Mile, it’s then another 4 miles after that.  We joked about ‘if only the mountains could talk’ and the stories they could tell.

Swept up into the stillness, the feeling of remoteness set in.  We went for a night paddle across the lake and back, taking in the sky and watched as the moon rose over the cliffs of Mount Colden.  We settled back at camp and didn’t bother to set alarms as we needed to rest up for a big day ahead.

It’s hard to know what time it is at the primitive camp.  Lying in the shadow of the mountain, it’s dark and dank and never seems to dry out.  It’s not exactly a comfy place yet we managed to sleep in.  Quick to get moving once we were up, we recovered our food cache, luckily right where we left it.  After grabbing enough food for the day we made the short bushwhack to the Dike. Within minutes we were standing at the bottom looking up.  “Is it like Breakneck?” asked Powerman, referring to the Hudson Highland’s test piece we grew up on.  “Ahhhh, yeah, it’s like Breakneck…  just a lot longer and steeper… and it has a waterfall. We got this.”

At over 1,800 vertical feet, it’s a direct line to the summit.  Mostly Class 3 mixed with a few Class 4 cruxes where some use a rope.  It had been fairly dry recently so luckily the water wasn’t raging.  Keeping a level head and three points of contact is a must in this terrain.  We made our way up deliberately through the exposed cruxes, doing our best to avoid the slick rock.  ‘Slow and steady wins the race’ became our motto.

Evidence of the powerful forces of nature are on full display here.  The Dike tells the tale of upheaval and erosion.  Storms routinely flush its contents down into the lake below.  Hurricane Irene created the most recent slide.  Scrambling out of the Dike we found our way up onto the freshly scoured slab.  Potential energy was in abundance here and we were careful to not let it turn kinetic.

After a few moves over the headwall we found the herd path leading to the summit.  At 4,715ft it’s not the highest of the 46 High Peaks but it’s one of the most stunning.  Sandwiched between Mt. Marcy and Algonquin the bare expanse offers views in all directions, with Lake Colden and the Flowed Lands shimmering far below.

We lazed around the summit for over a half hour and amazingly had it all to ourselves.  “Glorious” exclaimed Powerman as he sat back for a nap.  I encouraged him to not get too comfortable as we had to keep moving. Before heading on our way to Marcy, we had some snacks and packed up, then started looking for our route down.

Instead of taking the hiking trail we opted for the 1990 Southeast slides, also cleaned out by Irene.  We hunted around for the secret entrance of the herd path leading to them with no luck.  I make it a point to never rely on cell phones in the mountains.  They were on airplane mode and we were only using them to take pictures.  I remembered the advice of the wise innkeeper, “If you get lost, look at the map on your phone and see which way the blue dot is headed.”  With that, we quickly unlocked the door and found our new challenge.

Climbing the Adirondack slides can be a treacherous endeavor.  Especially downclimbing.  We poked our way down over the head walls.  Shimmied down the slabs with varying techniques.  I tried crab walking while Powerman swung from the trees.  It wasn’t pretty but we made it safely into the drainage where the steepness eased up.  Down over ledges and debris we followed it out to another bushwhack to find the Lake Arnold trail. Deep in the thicket, Powerman found a pair of ski goggles someone had lost: a prize for his first ever Adirondack High Peak, completed trailless as well.  We had yet to see a single soul since the night before.

Now on the trail, we negotiated the flooded works of beaver. Zig zagging our way through the muddy track we soon found the Feldspar Lean-to and a lone occupant celebrating their birthday.  We wished him a happy one and set out for the climb to Lake Tear of the Clouds.  The highest source of the Hudson, Marcy’s peak lies just above.  We filtered some water and went for it.

Scurrying up the summit cone we saw the weather was about to change. We made it to the top just in time to take in the views, the 6.4 million acres of the Adirondack Park sprawling into the distance. Rejoicing on the rooftop of the Empire State, we again had the place all to ourselves. Maybe because it was about to storm. The first raindrops were felt as we cut into the celebratory pepperoni stick. “We gotta go! Now!” With 6 miles back to camp we started our hasty retreat.

Running down the now wet rocky slopes I caught myself after a brief stumble. Reminded by our motto, I slowed to let my feet catch up, knowing it was foolish to think we could beat the storm. First it rained then it poured. A brief glance from Lake Tear showed Marcy now obscured by the clouds. Following the Opalescent, the trail was now a race of water and our exhausted bodies splashing down towards the Hudson. We couldn’t be more wet as we navigated the rooty, muddy trail around Lake Colden arriving back at Avalanche just before dark.

Stripped of our wet clothes and half naked, we quickly made dinner and discussed our options which weren’t many. Luckily, we had enough dry gear stowed in our shelters to make it through the night. With no cell service we couldn’t check the weather. It didn’t really matter anyway since we were staying put and resigned to endure whatever may come. We crashed in our shelters for the night and it poured some more.

In the morning we prayed the storms had passed. The sky was overcast so it was hard to tell. Quick to the boats we could see the blue sky poking through. We ferried ourselves across the lake passing the Trap Dike which was now a raging waterfall. On the other side the sun came out. Its warmth never felt so good. Our packs reloaded, we ambled out over Avalanche Pass, passed Marcy Dam and back down the truck trail.

Safely back at the car, we celebrated our 51-hour crusher with a high five, a hug and some Mill House Light. We proved to ourselves that we’re stronger now than we’ve ever been. We were amazed at what we accomplished with lots of daylight, determination and maybe a little help from above. Our dads were definitely amused by our good time.

14 comments on “Life is Short but Days are Long”