Lately, my kids have been showing less patience with my early morning ski day routine. Even worse then that, dragging them out of bed has been negatively affecting their staying power on the slopes. On our last couple of trips, they’ve been crying uncle early — to the point that we’ve quit by 2 PM. 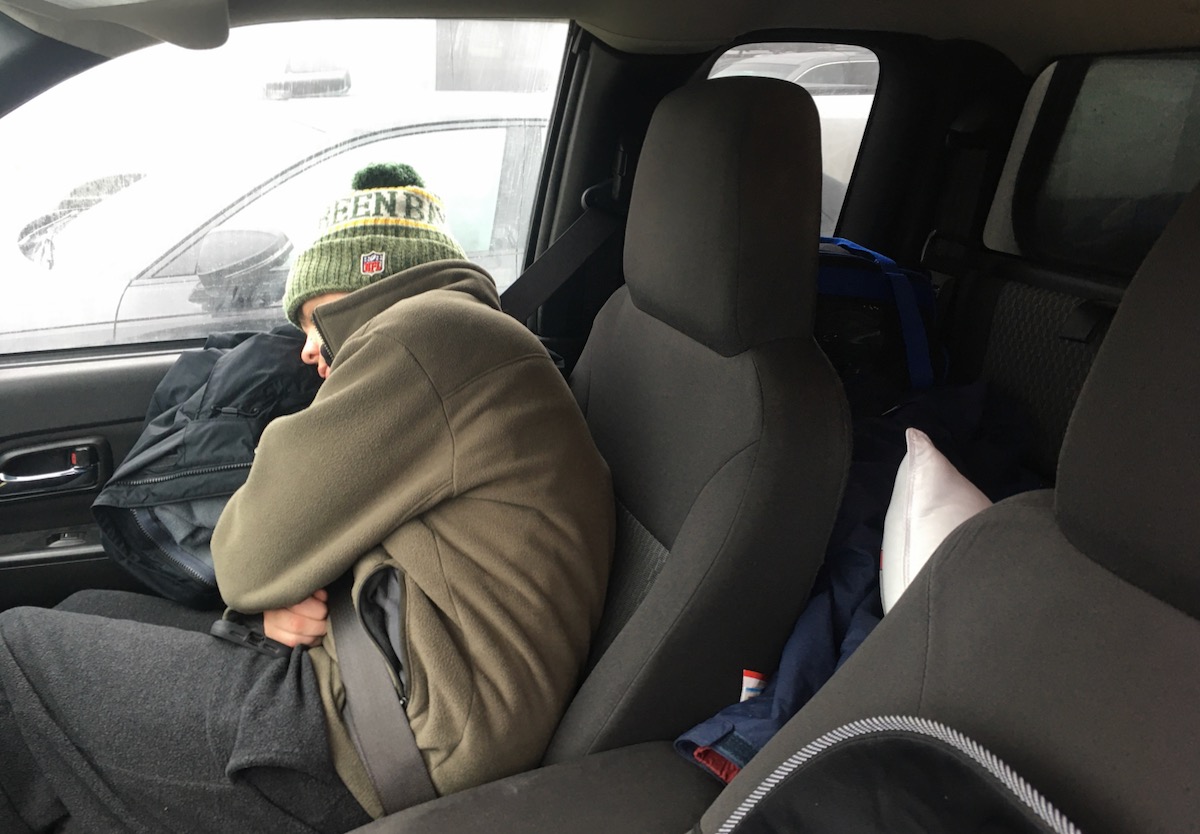 I figured the situation called for a little parental flexibility, so this time I tried something new, letting them sleep while I booted up and got ready for the lifts to spin. I figured an extra hour of sleep might make a big difference.

When I pulled into the lot at Catamount on Saturday I was greeted by a mountain wrapped in pea soup. I was also greeted by Rich Edwards, Catamount’s “Marketing Director.” 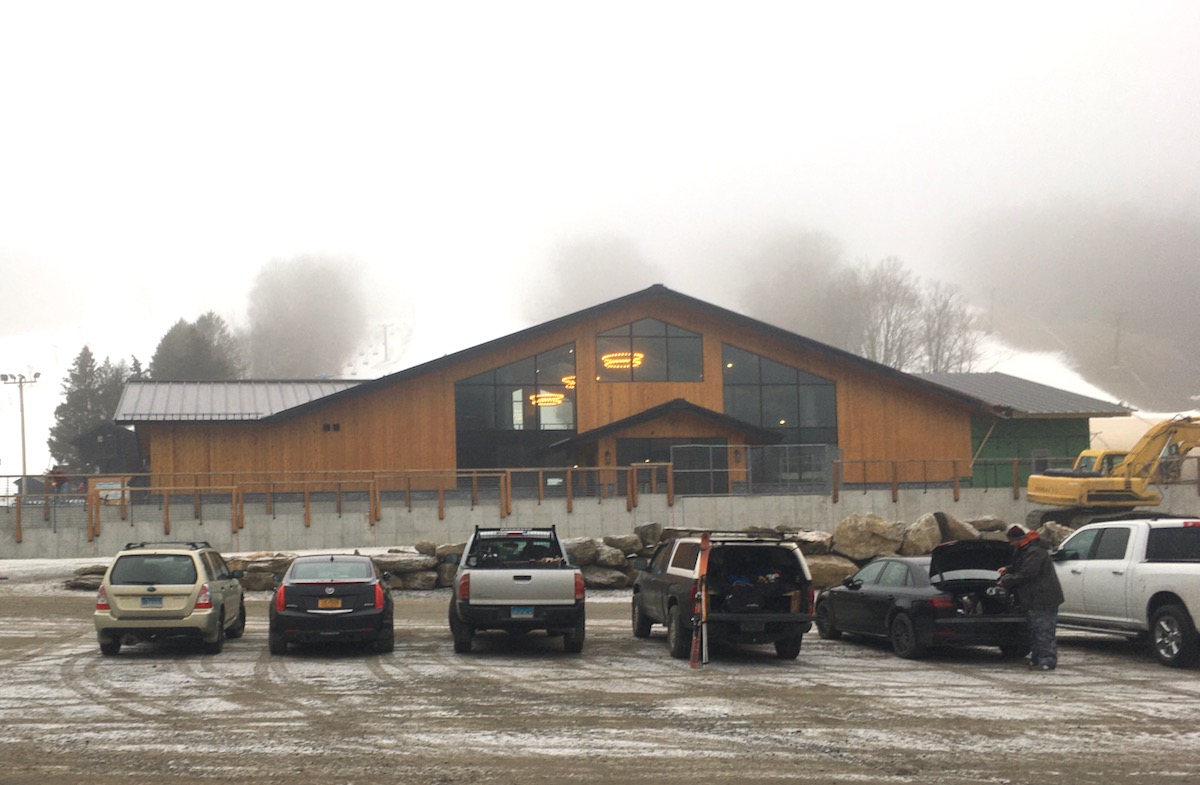 Rich is everywhere at Catamount, and that title doesn’t even begin to cover his job description. In the morning he’s out front, helping direct traffic in the parking lot. Whenever we headed back into the lodge, he was there, checking in with guests and chatting with the locals.

We said hello for a few minutes in between arriving cars, talked about conditions and promised to meet up later for a few runs. 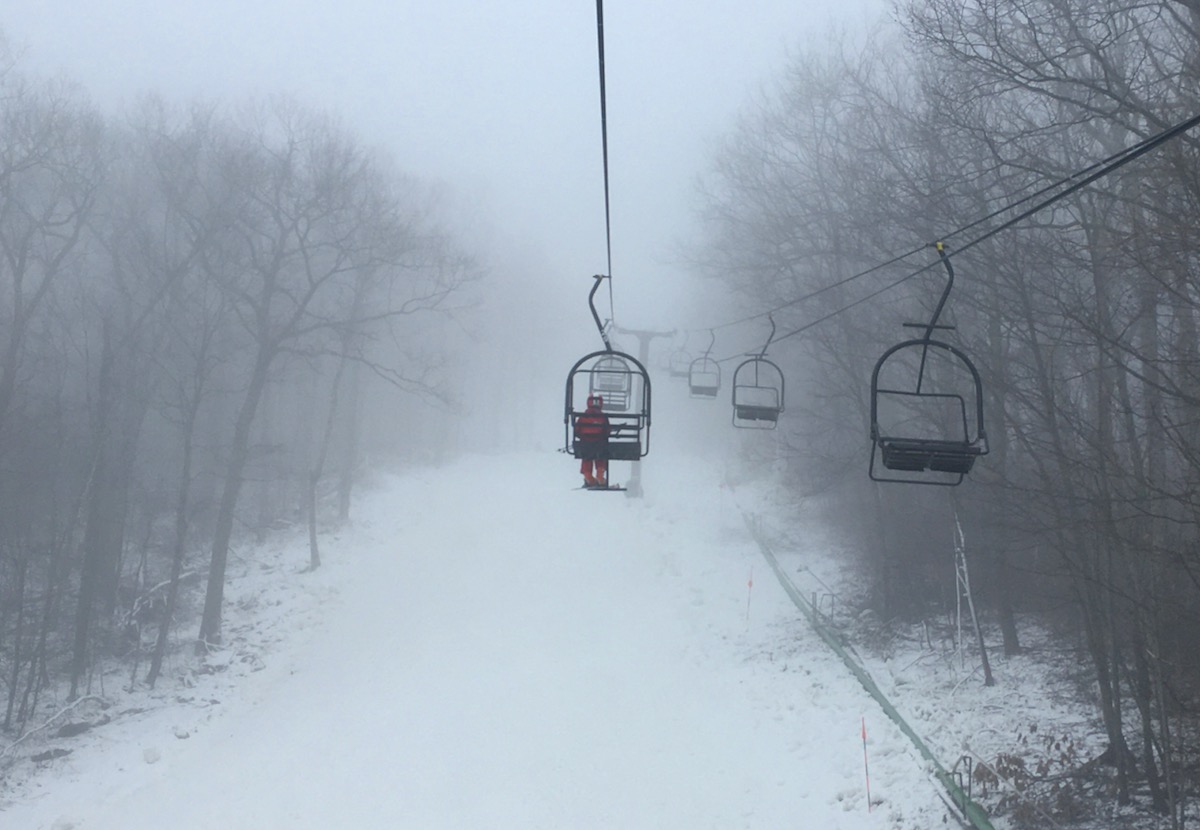 I was on a mission as I rode the chair up into the cloud on Saturday. I wanted to check out Ripper, one of Catamount’s new double diamond trails. This was my third visit to the hill this year but the challenging weather has slowed down terrain expansion across the northeast.

I’m not exaggerating about skiing in a cloud. I got off the lift and turned left onto Ridge Run, cruising past Catapult to the top of Ripper. From the map and previous visits it looked similar to Catapult — Catamount’s signature run — maybe even steeper and longer, with more of a straight shot down the fall line. 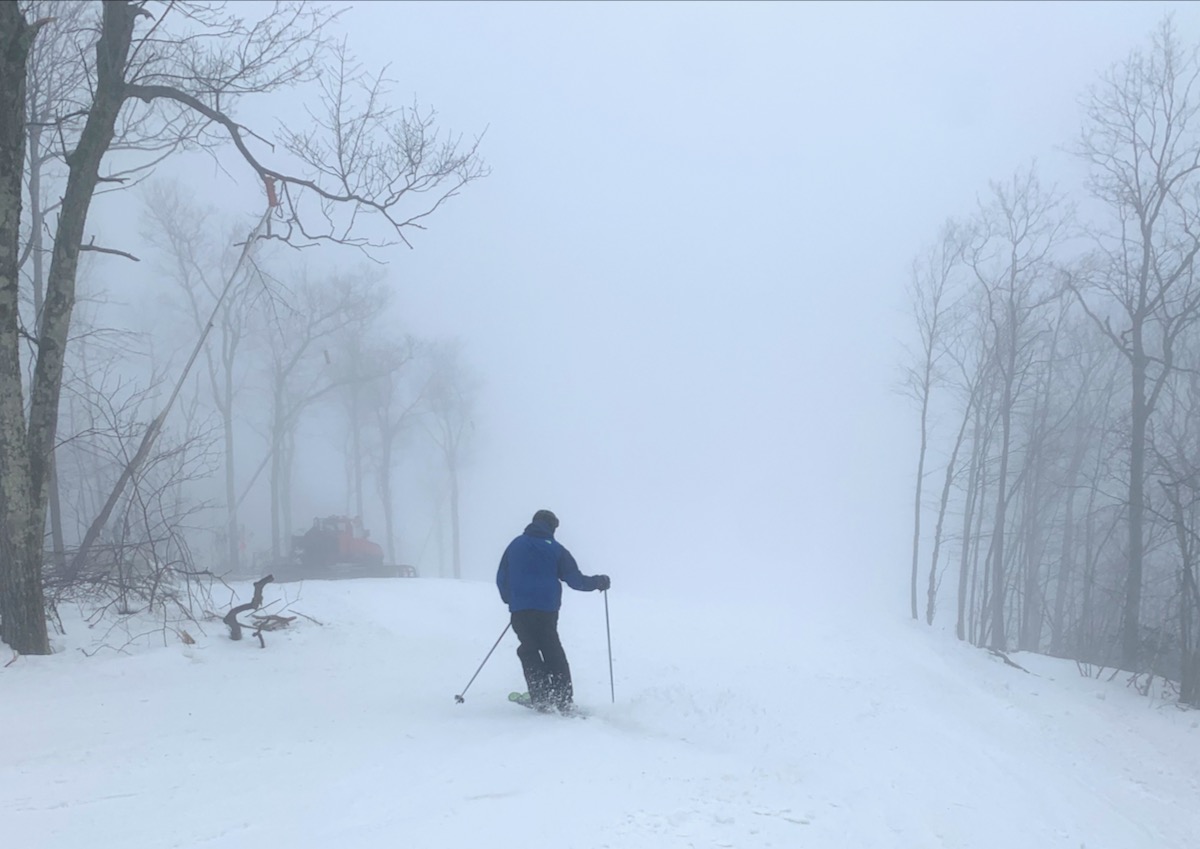 The winch cat parked at the top testified to its steepness as I gingerly slid up to the headwall. Peering down through the fog, I sensed carveable corduroy. I dropped in and picked a line along the trails edge on skiers right. The impression of steepness was acute, accentuated by the thick fog.

The abbreviated visibility made it feel like the trail was falling away beneath my feet. I zoomed down the runout to get back on the quad and lapped Ripper and Catapult until around 10 AM. I detoured through the lodge to get the the boys egg sandwiches and went back to the car. 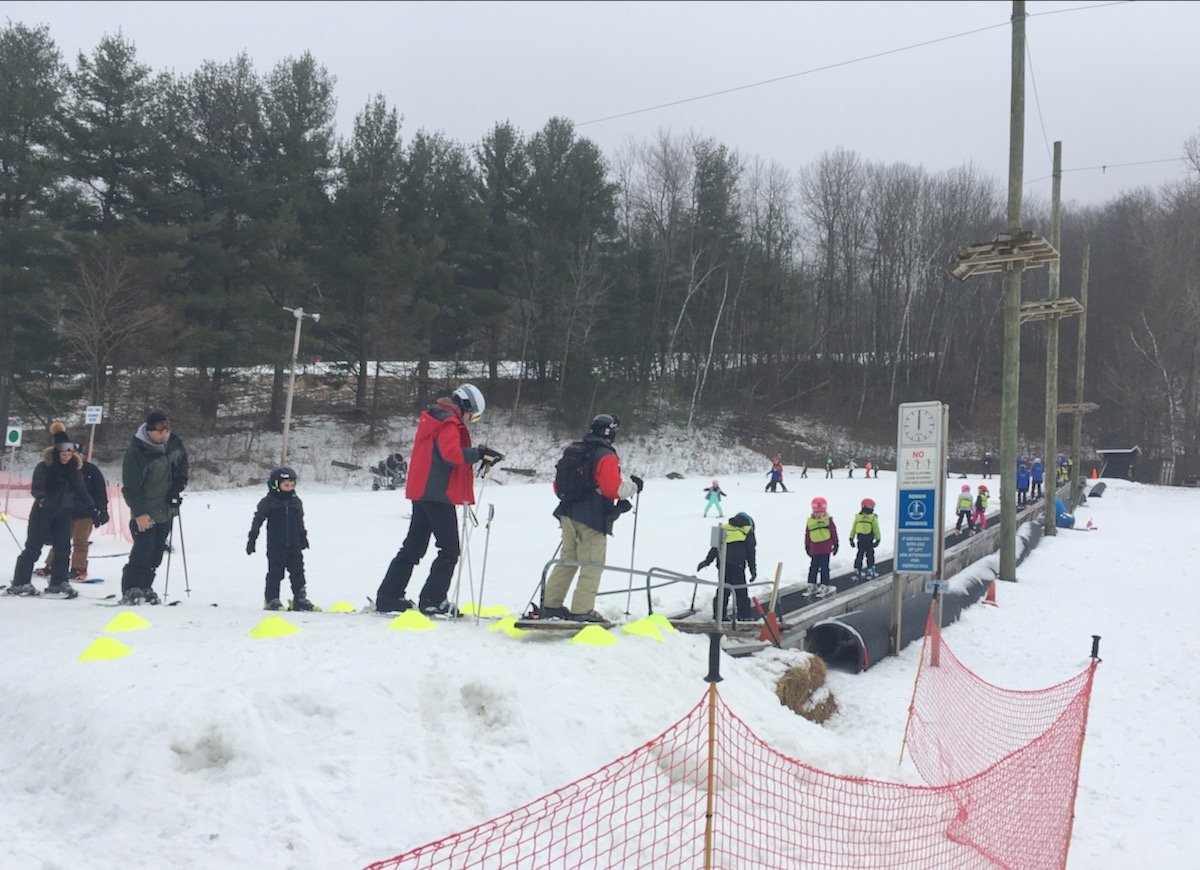 Junior was ready to go but his little brother wanted to wake up more slowly (read: look at his phone). Pushing my new flexible parenting style, I went with it, and took Junior up the hill to show him Ripper.

While we were riding the lift I noticed something interesting over to our right, under the double. We went to explore and found another double diamond, Lynx was open. In all the times I’d been to Catamount I couldn’t remember skiing it. We found our way to the top and dropped in. Lynx isn’t as steep as Catapult and Ripper but man-o-man it turned out to be narrow, right down the fall line and tons of fun. A new favorite. 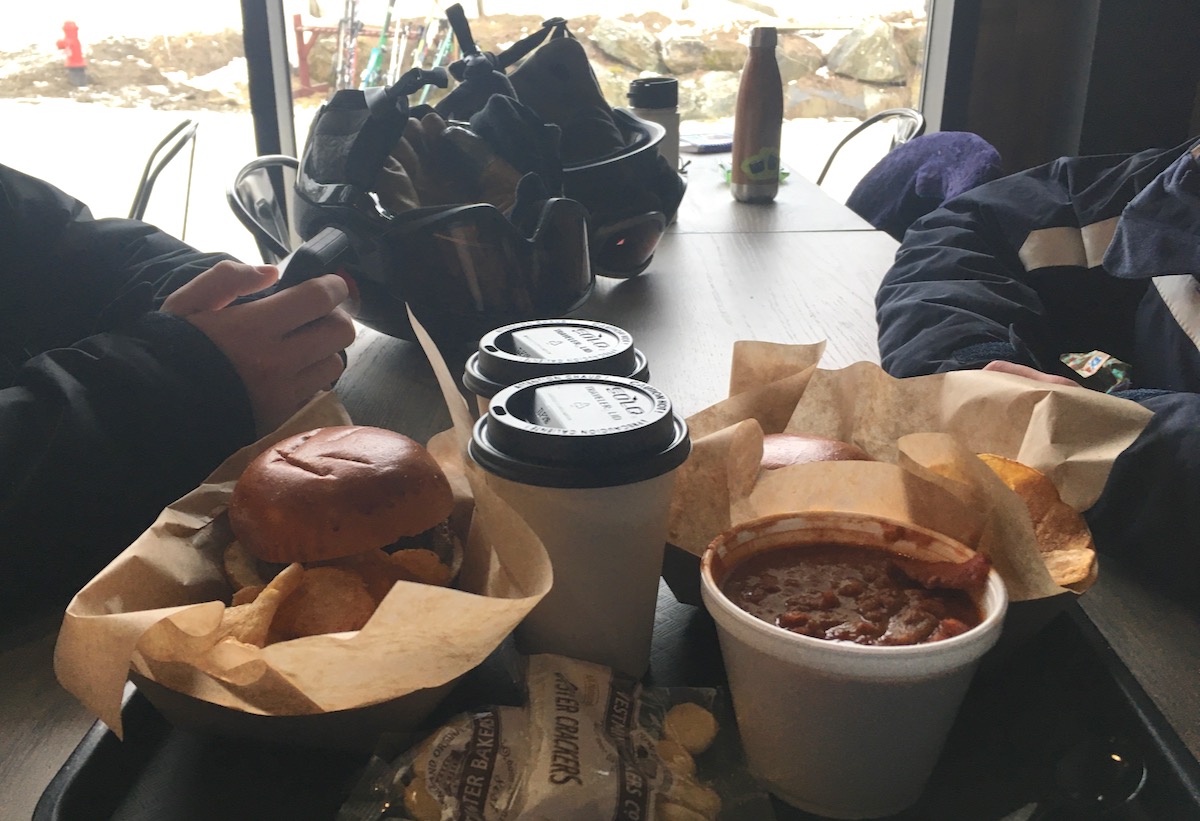 We went back to collect my thirteen year old, who was finally ready to ski. We rode the two triples on the Massachusetts side, skiing the blue and green cruisers until 1 PM when the boys were ready for more sustenance. We headed back to the lodge. I bolted a cup of chili and headed back out while my sons ate at a more leisurely pace (read: looked at their phones).

Luckily for me, I bumped into Rich again and this time he was on skis. We hopped on the quad and headed up. Even more luckily he was headed for Lynx. I told him I didn’t think I had ever skied it before. He explained that in the old days it didn’t have snowmaking so it was often open only a few days a year. Ah, that explained it. 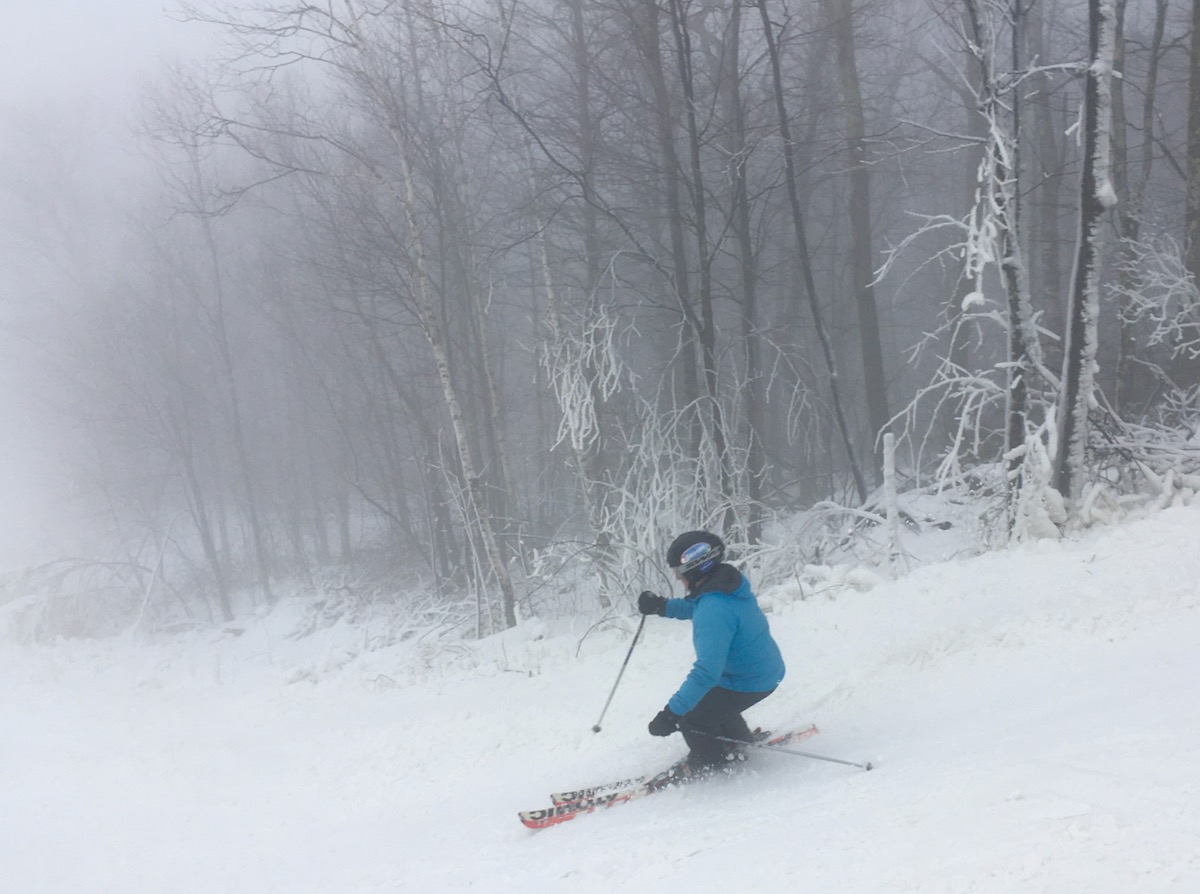 Rich is a serious ripper, which is to be expected, having spent literally his entire life in the business. We skied Lynx, Ripper and another one of Catamount’s new trails called Marty’s Run. At that point Rich moved on to other duties and I collected the boys from the lodge for a few more hours of skiing before we hit the road around 4.

It was a great day I say. The snow was good all day, ranging from creamed cheese to mashed potatoes consistency. Even late in the day, scraped off spots were few and far between and generally small enough to be avoided. 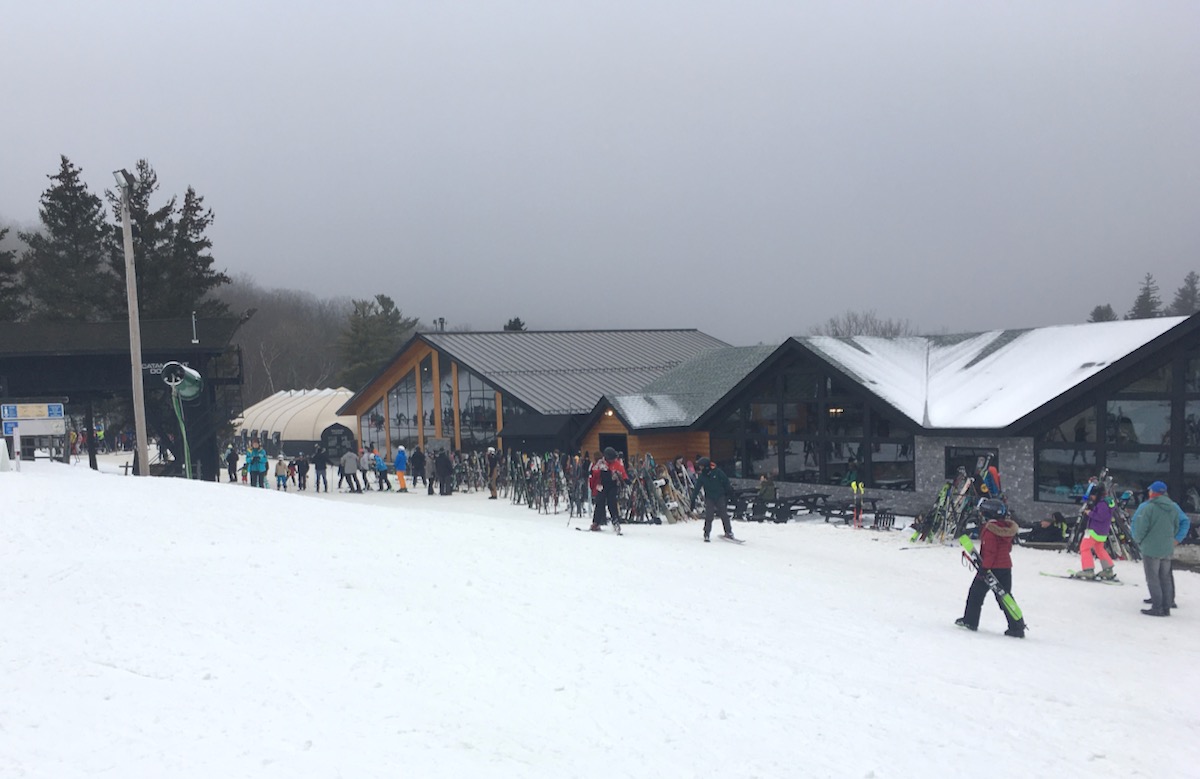 The changes at Catamount since the purchase by Berkshire East look good and the place has retained its family friendly charm. Uncrowded trails, short lines and diverse terrain still make for good skiing. New trails are just a part of it. There are ongoing snowmaking upgrades, a new lodge, a new triple chair and more to come.

NYSkiBlog is joining with The Indy Pass to bring exposure to independent mountains. This piece is part of our effort. For more information visit the Indy Pass website.

11 comments on “Catamount: Into the Clouds”