As I’ve gotten older, I’ve improved my ability to deal with missing out. I’ve learned to smile, while sitting at my desk on a powder day, as my phone buzzes off the hook with incoming photos. At the same time, I fully appreciate those moments of logistical magic that allow me to be in the right place at the right time. 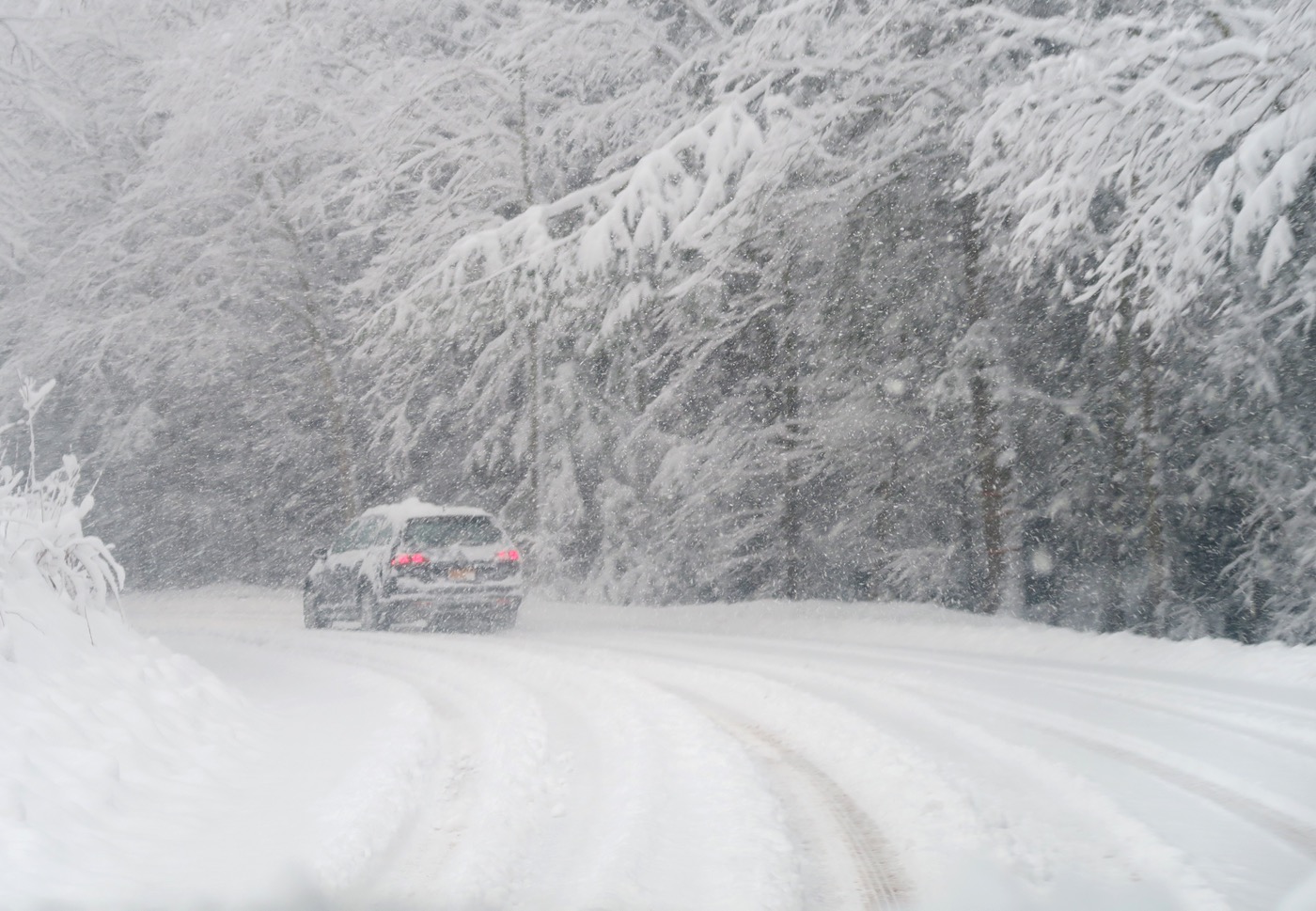 Early last week, a winter storm was flirting with the various weather models. Forecasts ranged from a gully-washing rainout to an epic nor’easter. One thing remained consistent across the models; if it did snow, the Catskills were in the bullseye. And as the week wore on, the chances for snow in New York were on the rise.

On Wednesday the first piece of logistical magic fell into place; Plattekill diehard Marcski offered me a bed in Margaretville for Thursday night. It was a chance to drive up in the rain, before the best of the storm. Then, during the day on Thursday, weather.com named the storm Riley. This was taken by all Plattekill regulars as a true sign from Ullr that this storm was going to deliver the goods in Roxbury NY.

When I left our house Thursday at 9pm it was 45° and pouring. I fully expected that as I drove north temps would drop steadily and eventually I’d be driving in snow. I was surprised that it was still 39° as I drove up the hill to Highmount. When I arrived in Margaretville at midnight it was down to 36 and snow was beginning to mix in with the rain. Marcski and I knew we should hit the sack, but we were too excited to sleep. We cracked a beer and waxed our skis in anticipation of the cement that was forecast to fall.

Friday morning, we were pumped to wake up to a steady snowfall and five inches of snow in the yard. We made coffee and headed to the mountain. The driving was slow and we were lucky — with the help of a Delaware County road crew — we made it around a downed tree that was across Route 30.

When we arrived there were 10 or 20 cars in the lot. It looked like some had spent the night, as several cars were still covered in snow. We headed in to boot up and wait for the lifts to spin. Both chairs went off as scheduled or a few minutes afterward. The wind was howling.

I started my day skiing with the Men in Red from the Plattekill Ski School, MattChuck, Yosef and Catskill Freeheel. First tracks were best on low angle terrain. The manmade base underneath the new snow was bullet proof and the wind was exposing shiny surfaces on all the headwalls. We stayed on the double side where it was less windy and the coverage was more consistent.

Later in the morning the snow and the wind really picked up. It must have snowed two or three inches an hour well into the afternoon. By noon all traces of the bottom were gone and Plattekill was 100% open for business. Twist and Ridge were deserted and any tracks you left on that side of the mountain were gone by the time you returned.

At 12:30 disaster struck. Marcski and I pulled up at the base of the double and waited for MattChuck. As the minutes ticked by, I got a very bad feeling. In all the years I’ve skied with Matt, I’ve never ever seen him fall behind. After what felt like an eternity, he came down, skis together, poles dragging, holding his face, right past the lift, to the lodge. Not good.

We followed him, and when we got to Patrol base, he was holding a bloody paper towel to his face. I folded a clean towel and handed it to him. As he took the old towel away, we could see a gash from his chin to his neck that could only have been caused by a ski. I couldn’t imagine how you’d get an ambulance to the mountain in the ongoing blizzard.

Hats off to Plattekill Patrol, who took quick and decisive steps to stop the bleeding. After about 30 minutes, with the situation “stabilized” Matt encouraged us to head back out to complete our mission. Still a bit in shock, we headed back out to slay the afternoon. As we made our way through the lodge, I saw news on my phone about the widespread power outages that had crippled the Catskills and limited operations at Hunter, Windham and Belleayre. I couldn’t help myself, I stood up on a chair and raised my voice “Welcome to Plattekill, the home of Riley!” The fans went wild.

The skiing got better as the day wore on. The first six or eight inches was on the wet side, but in the afternoon the snow was much lighter. Good snow makes aspiring experts better and I felt like I was in the zone, attacking the fall line and being aggressive. Over the last few years I’m definitely doing more alpine turns, especially when surfaces are firm or if I’m tired. But while Riley was raging, I skied hard and tele’d the whole damn day.

At day’s end the bar was filled with joyous exuberance. We had dinner and bought rounds and cheered. At sunset Marcski and I headed back to his place in Margaretville. As we suspected, like most of the rest of the Catskills, we had no power. Luckily we did have a propane stove and a flashlight to warm things up. It snowed into the night as we relived tales from the day. We crashed hard and woke up early the next morning, ready to go after it again.

We arrived around 8am and the upper parking lot was already filling up. We booted up in the bar upstairs. The lodge was busy considering the early hour and a line was forming for tickets. Plattekill’s internet connection was down, taking the credit card system with it, so tickets were cash only, adding to the commotion.

We got in line for the triple and saw a massive conga line of cars coming up Meeker Hollow Road. The social media uproar created by Plattekill skiers combined with the limited operations of the other Catskill areas was drawing snow riders from across the region.

After the snow and wind from the night before, the mountain was, once again, completely untracked. Scottski and I loaded the triple and headed to Blockbuster to see if we could grab first tracks before the double started to spin. We made the mistake of taking Buckle Down and got bogged down in deep deep snow. With no hope remaining for first tracks on Block, we dropped down on Switchback to get first rips on Freefall.

By late morning I was feeling the effects driving, shoveling, skiing and reveling. I knew I was short on good shots from the storm, so I started to slow down and take pictures. I’d hookup with someone on the lift and end up alone after most of my runs. At the top of the double I connected with Chris who suggested I follow him to rekindle a time-honored Plattekill tradition.

The trees were deep enough to go almost anywhere, but you had to be careful to avoid running out of pitch. If you stopped on anything that wasn’t steep, you were stuck. After a few runs playing Russian roulette in the trees with Chris, I reconnected with Marcski. We headed back to Twist to ski the perfect soft bumps and pillage the wide strips of untracked that lined the sides of the trail.

On my next lift ride, I started to think about my family at home, also without power. The skiing was excellent, but I was tired and the forecast was calling for more snow during the upcoming week. It seemed like a good idea to get warm, grab a beer, and check on Matt before heading home to help out. 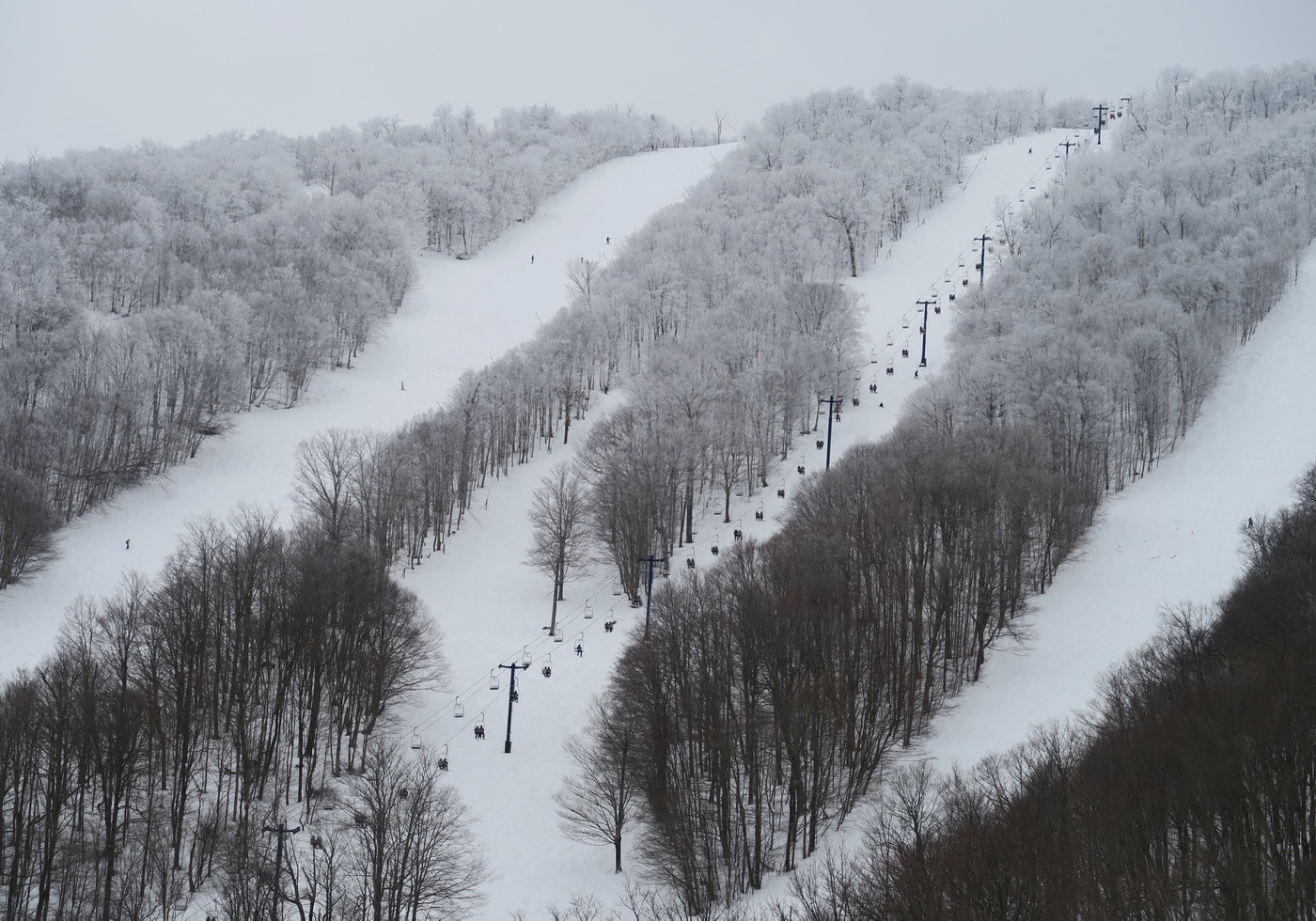 In line for my last run, looking up at the mountain, it occurred to me how perfectly suited Plattekill was for a storm named Riley, that dropped more than 30 inches of snow. The fixed grip Hall chairs had no issues with the wind which must have been gusting to 50 mph. The next day, the word had gotten out, and the place was jammed to the limit. But with every chair full, all day long, trails were never crowded. In this corner of the Catskills the kismet was electric, as once again the lifts spun all day, without interuption, through an historic storm.

As I was heading out to my car I ran into Laszlo in the parking lot, and he was smiling ear to ear. Saturday was Plattekill’s biggest day ever, dating back to 1993, and I’m sure Sunday was a huge day too. A lot of new skiers discovered the mountain — living the life of Riley — alongside the regulars.

Dedicated to MattChuck, long may you run.

17 comments on “Plattekill: The Life of Riley”