The second coolest thing about Suicide Six is it’s name. Suicide Six. It sounds gnarly and dangerous. According to legend, it got its name when the original owner was contemplating moving his rope tow from a smaller, low pitch parcel across the road. Somebody looked at the steep face of hill number six and declared that trying to ski it would be suicide. That’s a great story. 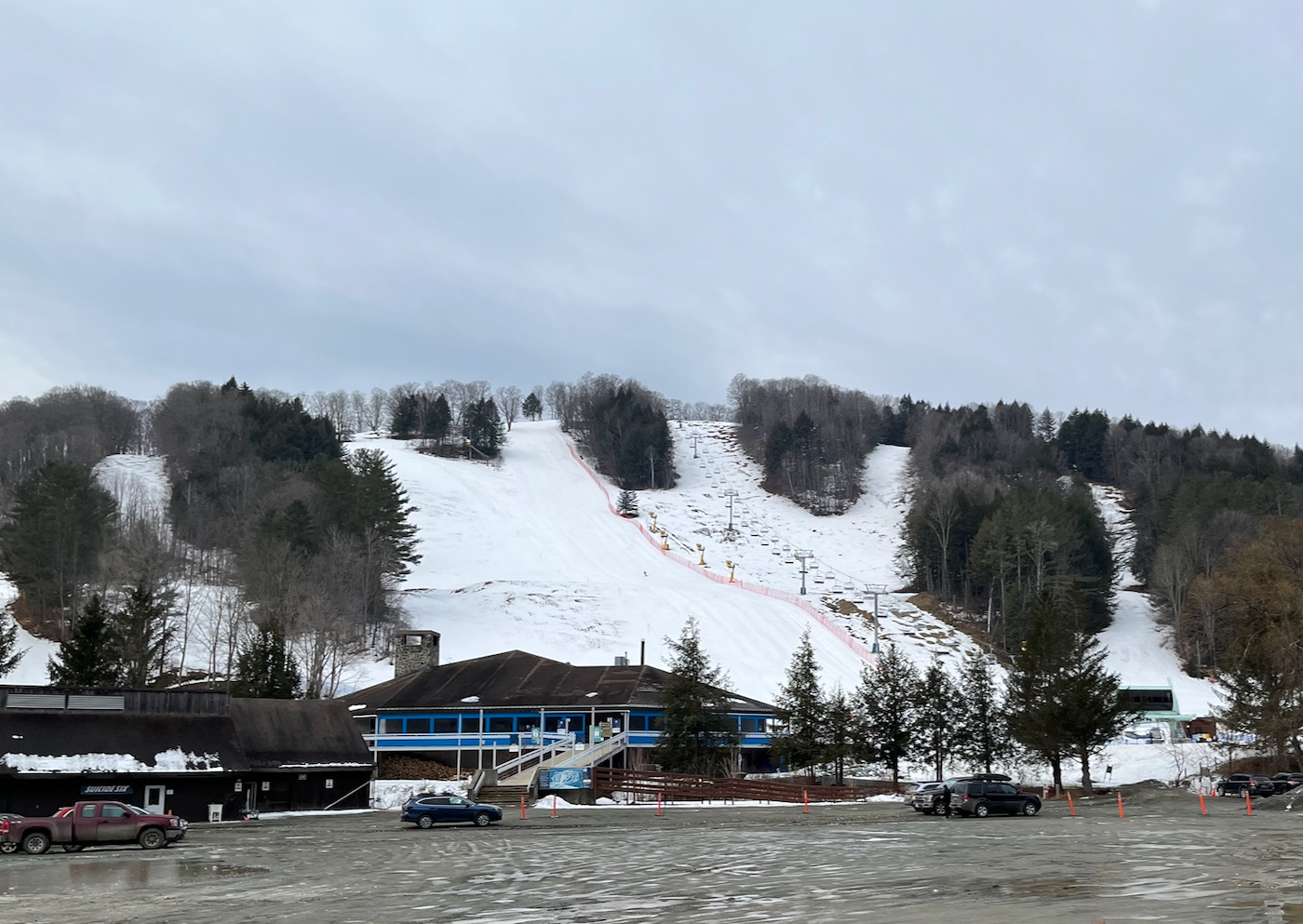 The coolest thing about Suicide Six is that it’s where lift served skiing began in the United States, all the way back in the nineteen thirties. It’s the site where the engine from a Model T Ford was re-engineered into a rope tow for the first time – in the United States at least.

I’ve had the intention to at least stop by and check the place out for a long time. Since it’s on the Indy Pass, I’ve felt the pull of the place even more the last few years. Something always gets in the way. This year, I made a plan to take a few days off during my older son’s school break in March. We would take advantage of the Indy Pass to visit ski resorts we hadn’t been to before. 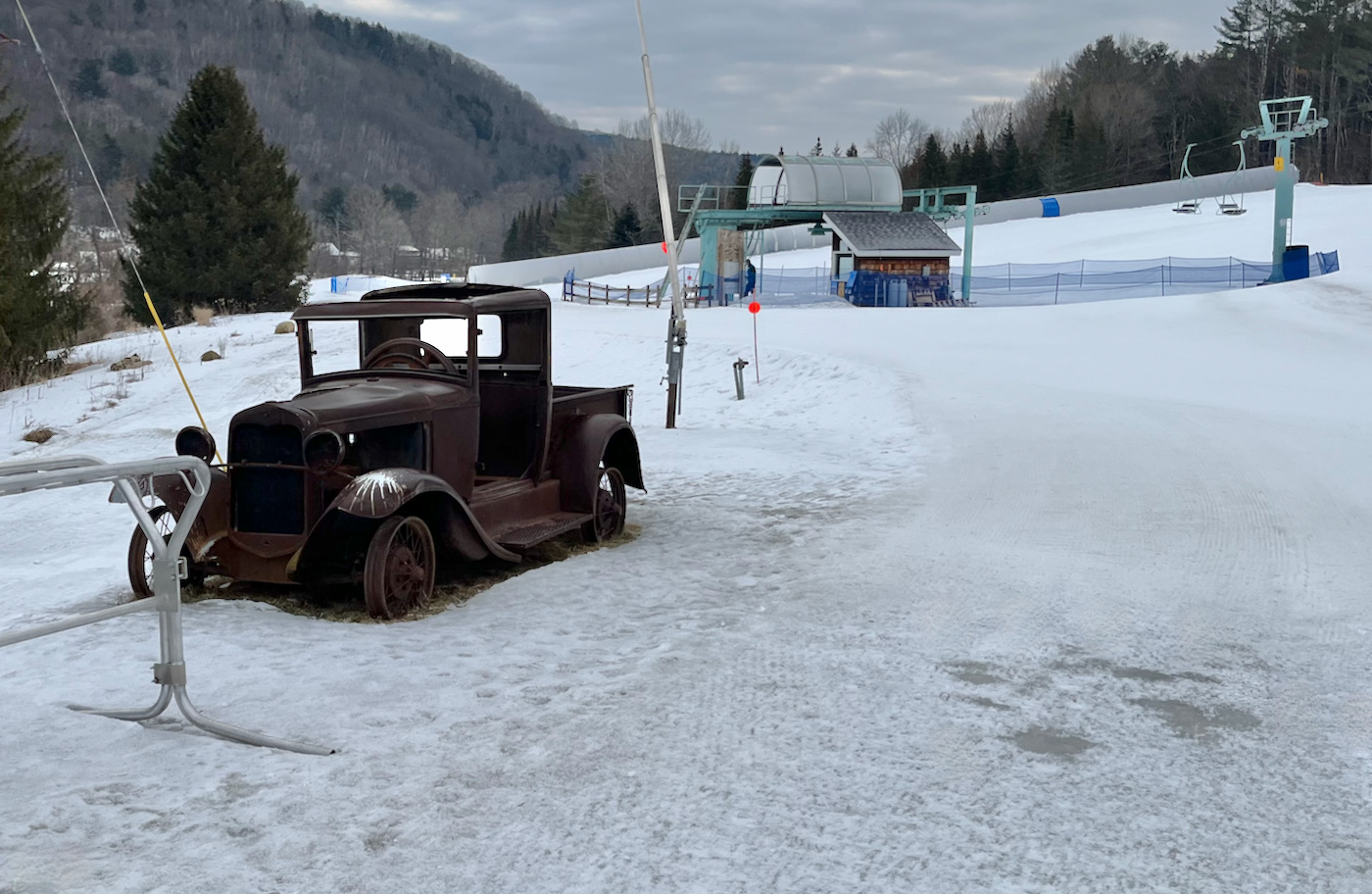 I planned out an epic five day loop of New Hampshire and Vermont. Like always, events intervened. It turned I was needed at home on Saturday and in Albany on Friday. Just like that, the plan morphed into two and a half days of skiing instead of five.

To minimize windshield time, we eliminated the New Hampshire resorts. So we skied Bolton Valley on Wednesday and Jay Peak on Thursday. We had a great time. 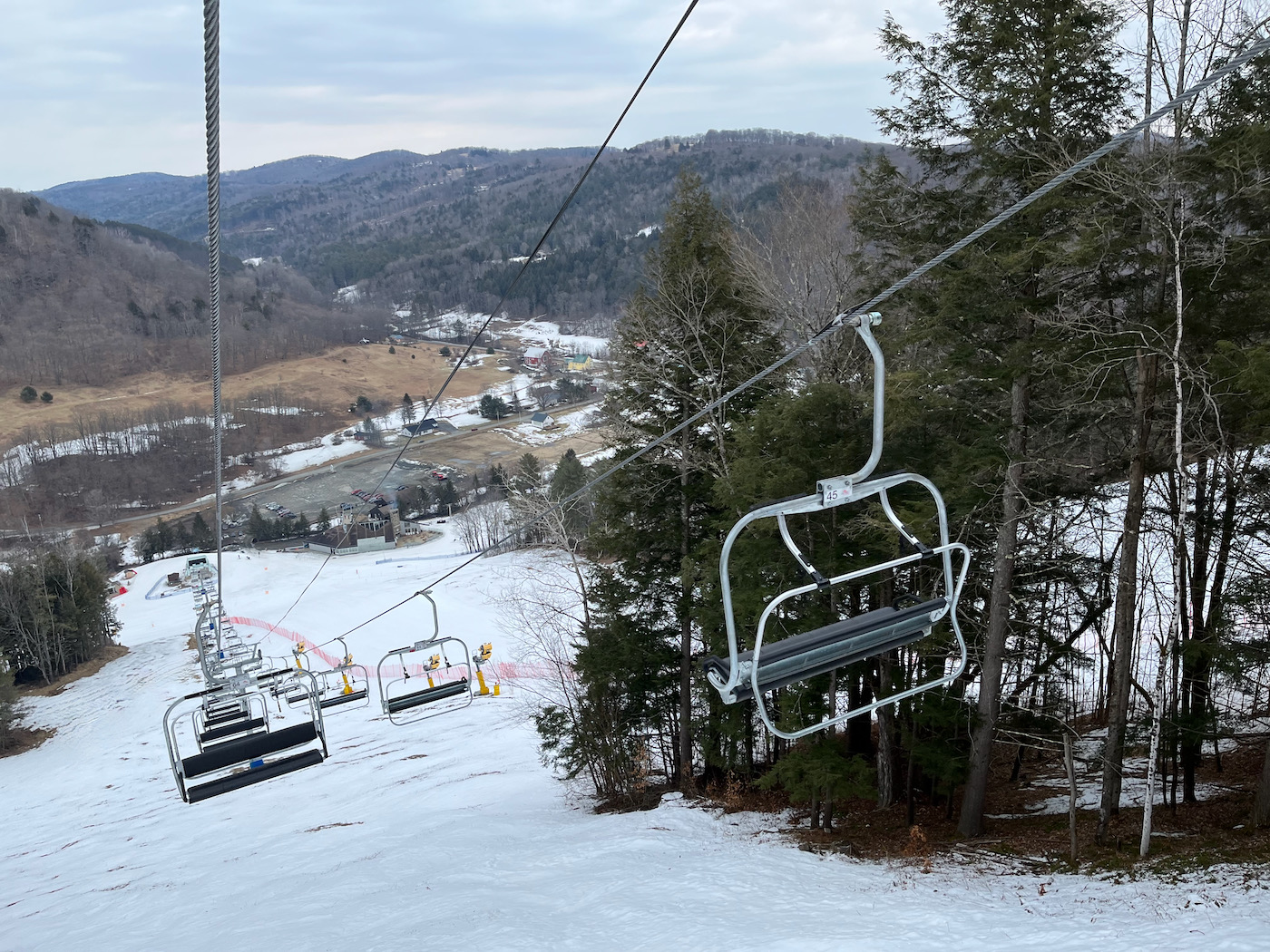 We awoke Friday morning in a hotel in Burlington and got an early start so we could squeeze one more new resort to our list. Suicide Six wasn’t anywhere near opening when we parked. They weren’t even selling tickets yet. We went ahead and booted up and explored the base area a little.

Right away I spotted the rusted body of a Model A Ford pickup truck with a little improvised bull wheel welded into the cab. No way, I thought. This can not be real. A liftie who wandered by on his way to start up the double chair insisted that it was. 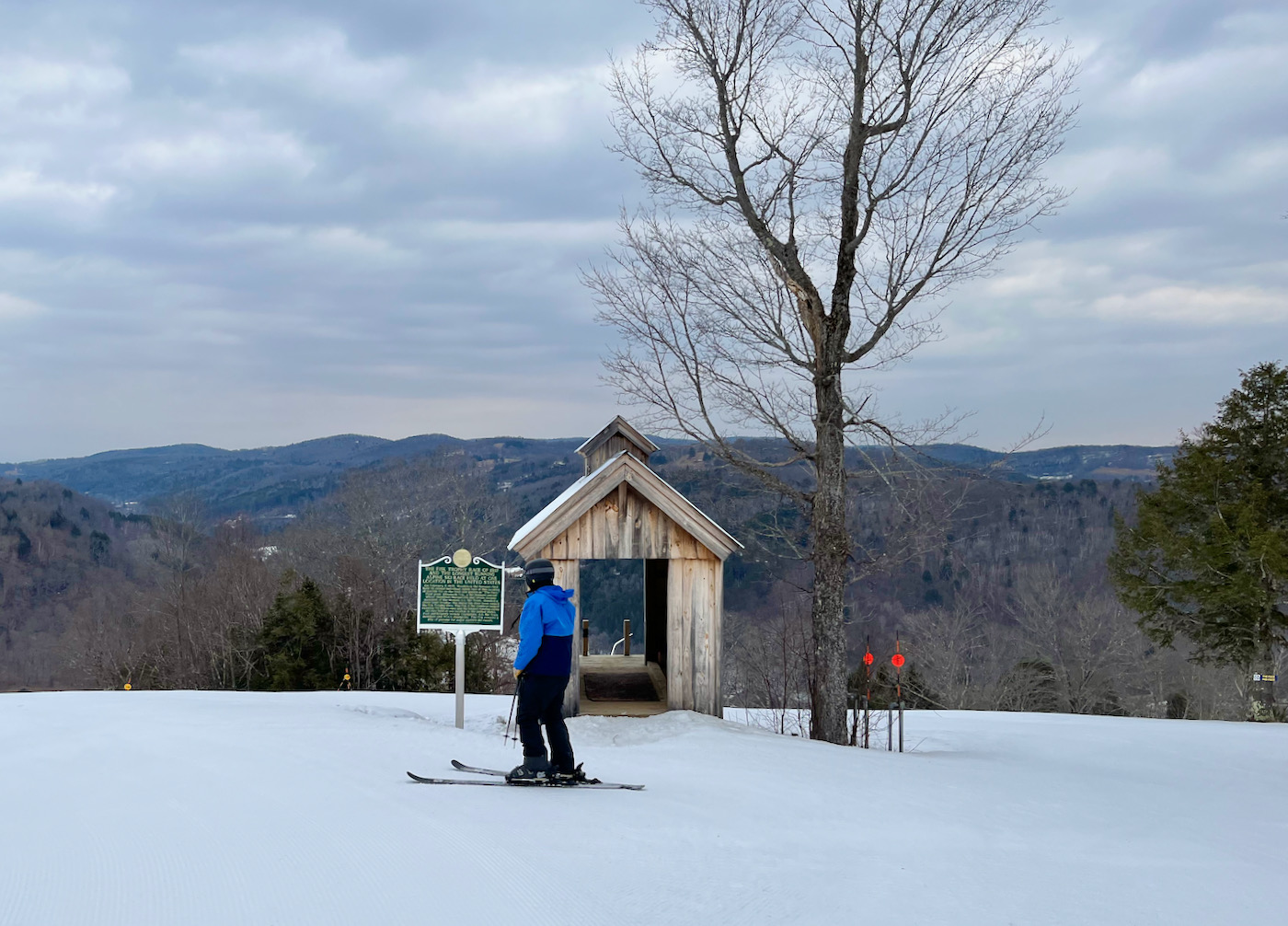 “I can’t believe it’s just sitting here,” he said, “Belongs in a museum.”

Okay. I didn’t believe him. It was cool anyway. One thing that I found interesting is just how small a Model A is. It’s not even as big as an old style Ranger or an S-10; closer to the size of a Subaru Brat.

The old truck wasn’t Suicide Six’s only nod to its history. Inside the groovy 70s era lodge was a very informative historical display describing the resort’s place in history and its evolution through the years. These guys clearly know their brand. 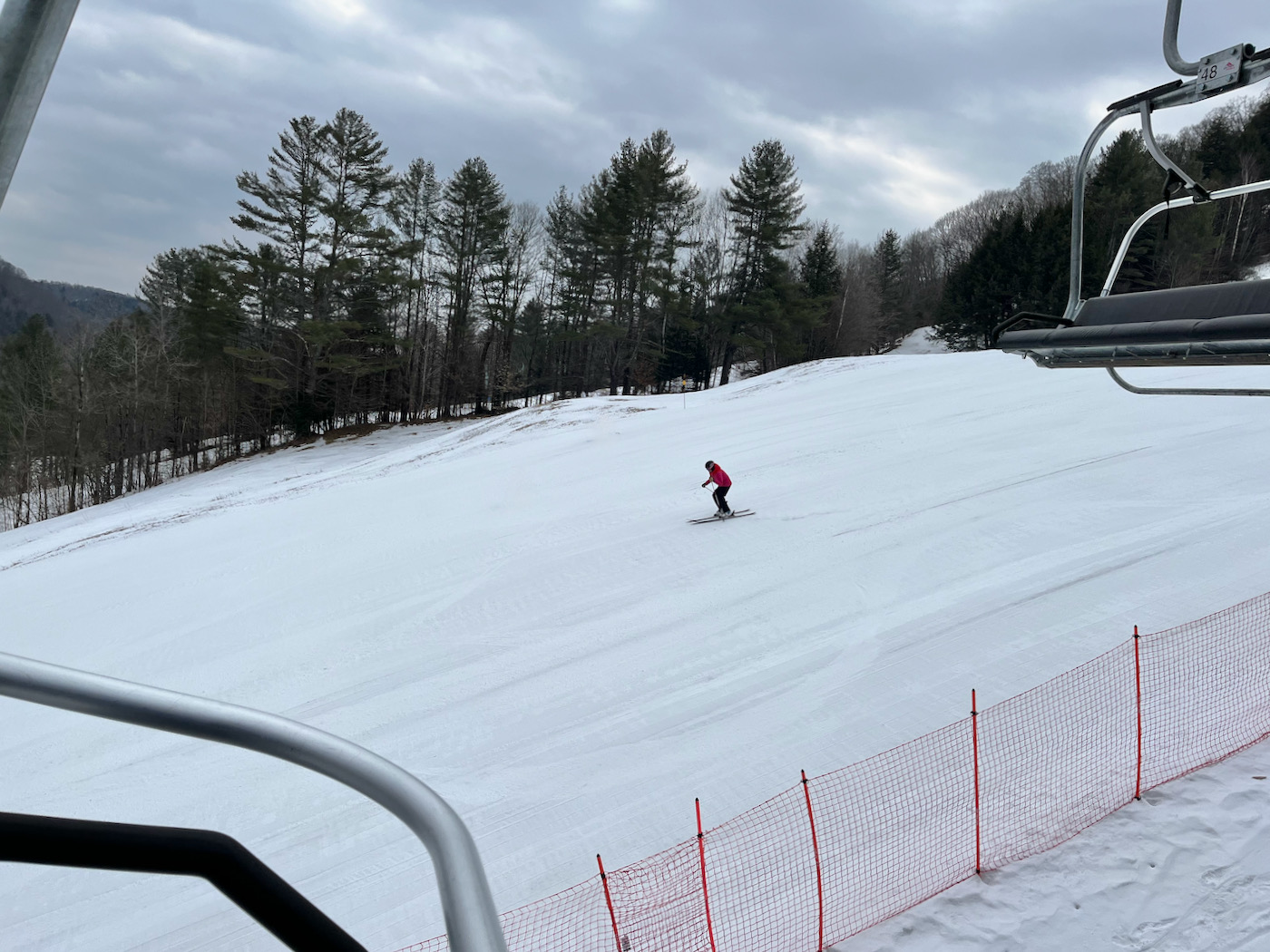 Eventually we were able to get our Indy Passes processed. I still had time to buy some stickers and a couple T shirts before we went over to the main lift, a quad, to wait for first chair.

They let us load at precisely 9 AM. We got to the top and turned left. Before actually skiing, there was some more history to take in. Next to a race shack at the top was a metal historical marker celebrating the Fisk Trophy, the oldest continuously held ski race in North America, first held in 1937. 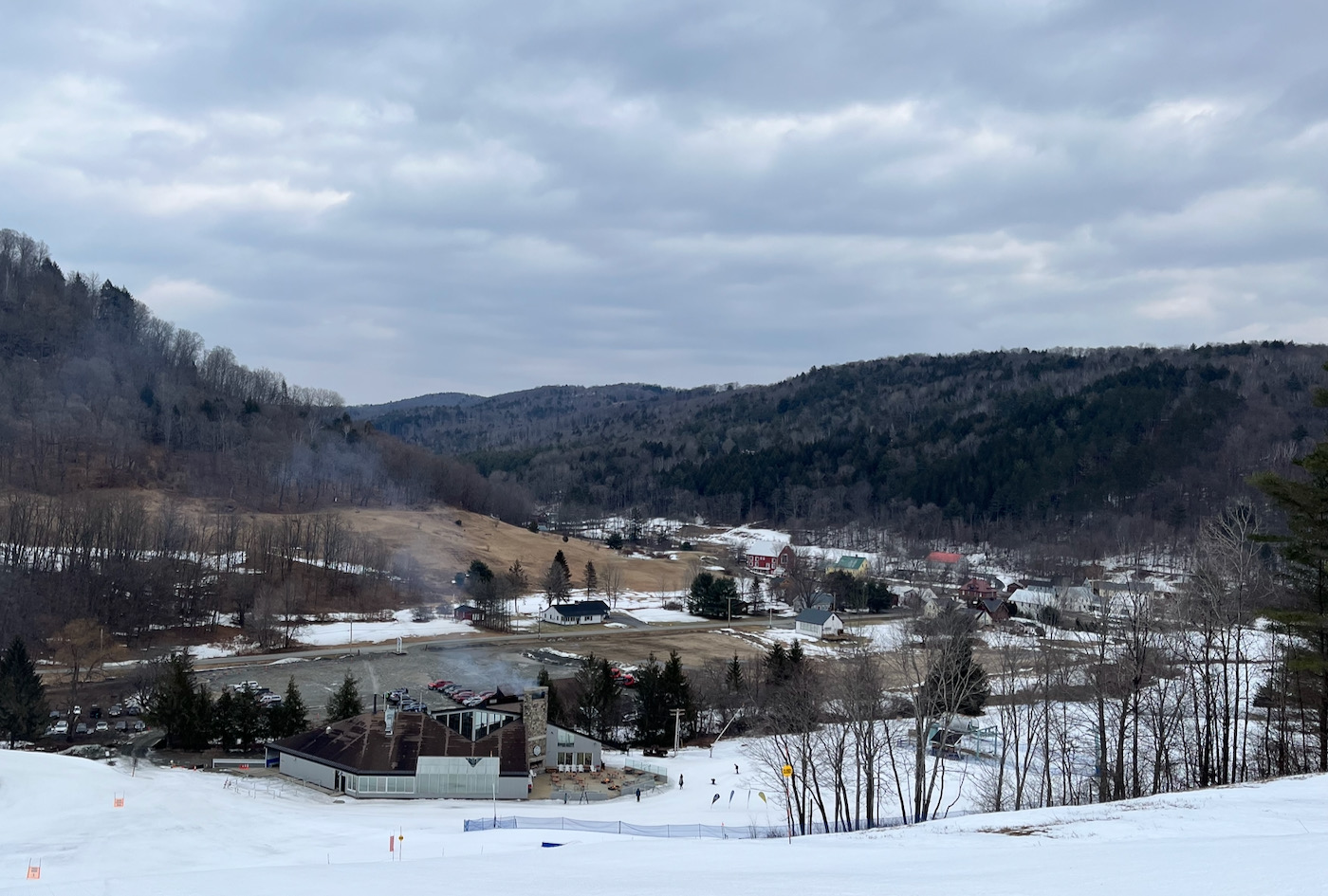 Finally, we got to the edge of Hill 6 and peered over. I have to admit it was pretty steep. I would be legitimately intimidated if I had to ski it on 1930s era gear. On modern gear, it was just fun — probably about a dozen zoomer GS turns got us back to the lift and we were on our way back up for run two.

That’s how we spent the morning, just skiing fast and having fun, gobbling up the corduroy. Suicide Six isn’t a big resort. It’s a feeder hill, similar to the many little family resorts that dot upstate New York, Pennsylvania and New England. We were able to ski everything that was open twice in an hour. 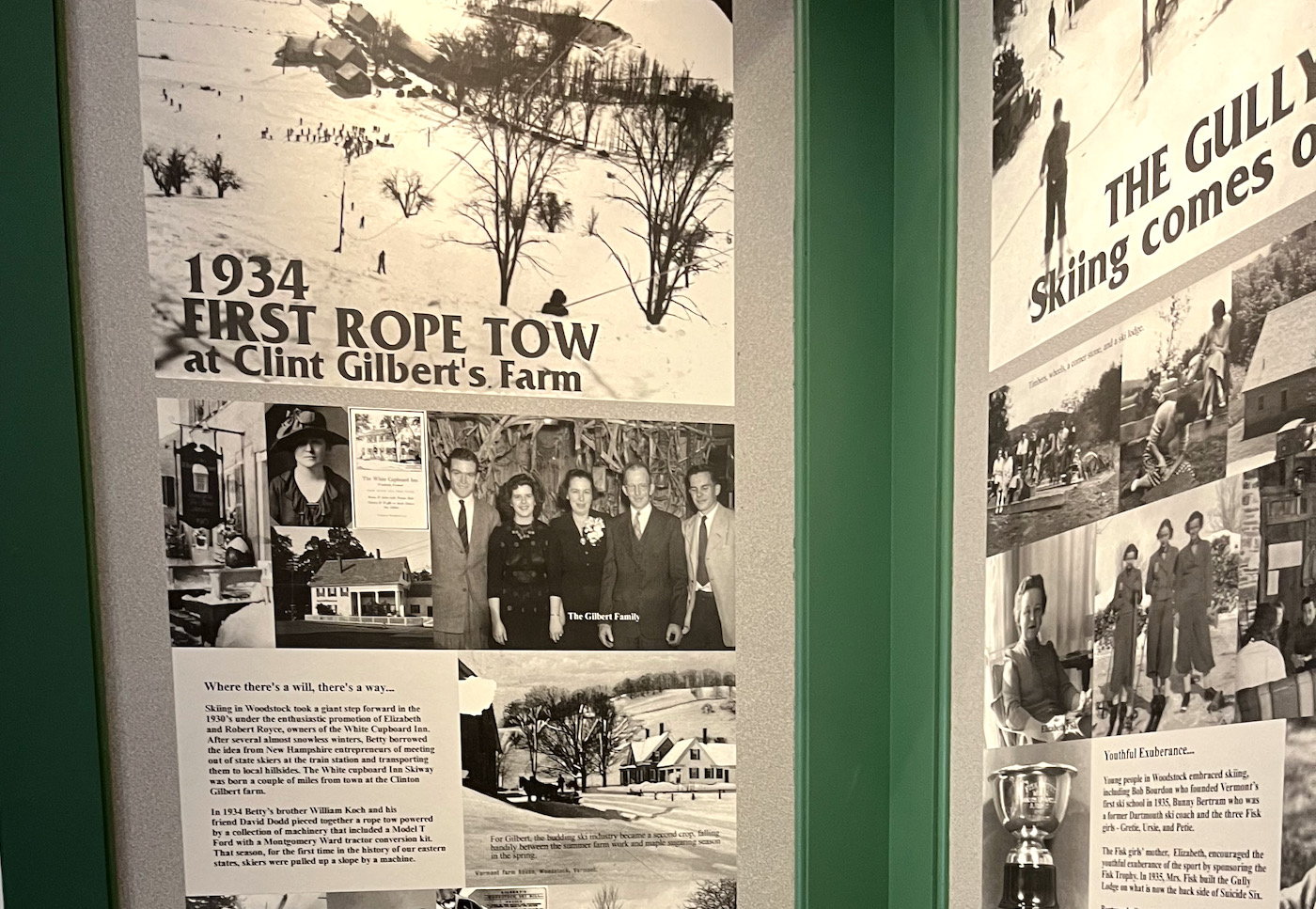 I really liked the place. It’s not big but the terrain under the main lift is pretty steep and the other trails, branching out on either side of the trail map are interesting and diverse enough to keep you engaged. The coverage wasn’t deep enough to go exploring when we visited but I could see that there is some interesting tree skiing to be had as well.

I’m glad we finally got to Suicide Six, where it all began.

NYSkiBlog has joined with The Indy Pass to bring exposure to independent mountains.
This piece is part of our effort. For more information visit the Indy Pass.