I hadn’t been to Plattekill since the NYSkiBlog annual meeting in early January. A week after that great day, I joined a long list of skiers I know who’ve gotten hurt this season, and I was out for a month. 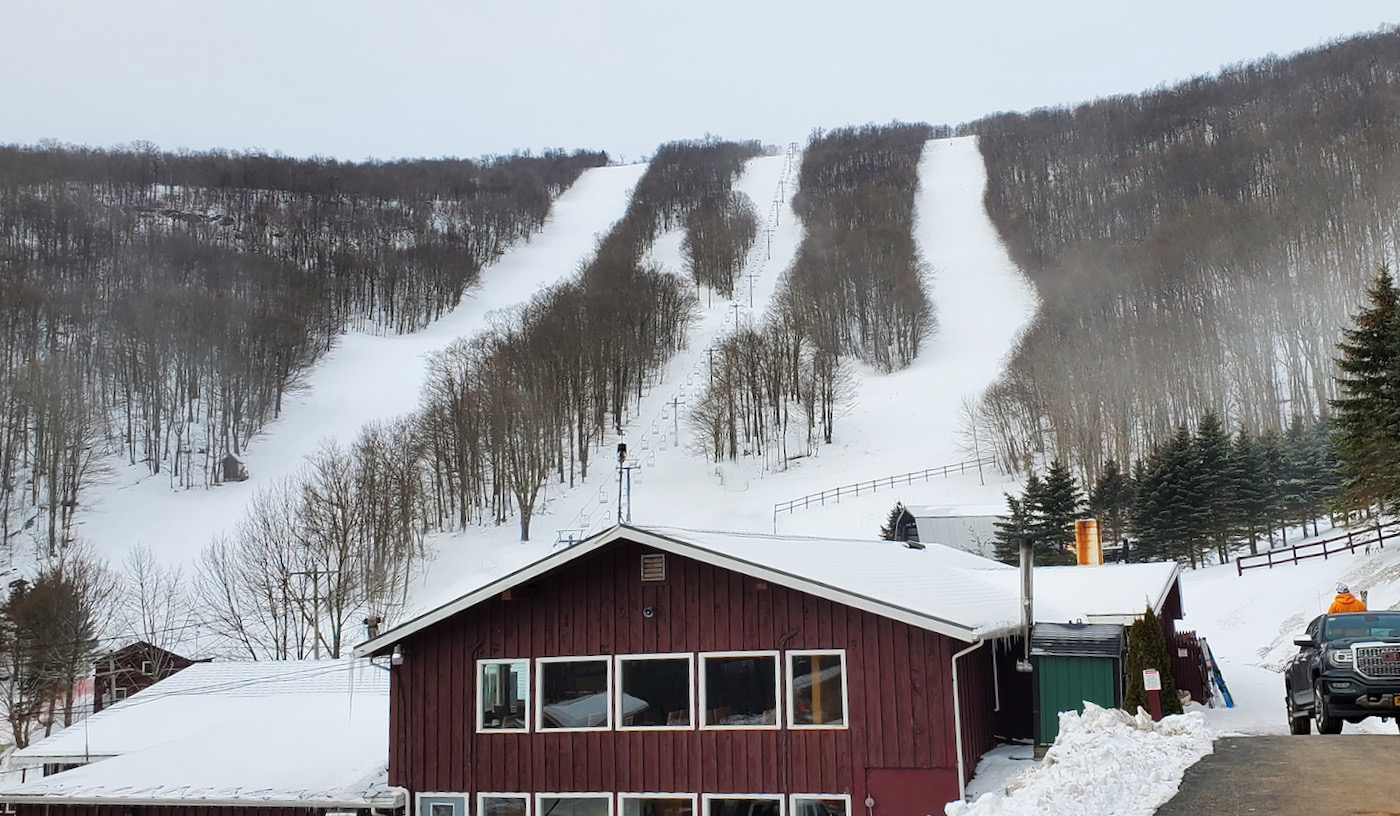 I wasn’t happy missing several weeks right in the heart of the season. I also felt I had let Plattekill down. When I first discovered this place, I knew I wanted to contribute. I kind of assigned myself the responsibility of telling the story.

The Catskills have had challenging weather this season and from what I had seen from a distance it looked mountain ops had done a solid job in spite of it all. I’ve seen several reports of good skiing at Plattekill this year.

But not being a part of it, I was in a bit of a funk. A steady stream of incoming texted images from the bumps on Plunge didn’t help.

As always, I set my Plattekill alarm for 3:45am. I hit the road by 4:45, shooting to arrive an hour before first chair. Probably crazy when spring conditions seemed likely, but at this point those pre-programmed alarms are part of my DNA. I did arrive nearly an hour before first chair, and I wasn’t even close to being first in the parking lot. Things are changing at Plattekill, more on that later.

I started to feel better right after I arrived. The first thing I noticed was the hissing of snow guns. While many mountains do, at times, make snow after President’s Day, it’s not a common thing. When I saw Danielle she said “you can always use more snow, and skiers love seeing snowmaking in March.”

I remember Steve Wright of Jay Peak telling me that “mountains run by financial people don’t push the limits of the season. It’s marketing people who do that, to strengthen the brand.”

I also got a boost from Chris and Anya, the Brownski Bros, Danielle and Laz, and all the skiers I know. Instead of “where have you been?” I got “it’s good to see you!”  That funk that was in my head, well the reception I got was a nice breeze that cleared it all out.

Even after recent rains, Meeker Hollow was snowier than everything around it. There was nothing spring about the conditions to start.  On the groomers it was clear that some natural snow was mixed it.  On a busy Saturday the trails never got noisy and the bumps were skiable right from the start of the day.

Regarding change: Danielle told me that a few years ago, on most days, she would recognize almost everyone in the lodge. Over the last two years, and especially this year, there are dozens of new faces. Don’t look now, but people moving to the Catskills from city are helping to drive the rural economy forward. Some are taking up skiing and Plattekill has been feeling the lift.

Plattekill, both the infrastructure and the team, look to be handling the surge pretty well. One noticeable change is a corral with a singles line at the triple.  When I first saw it, I did a double take, no doubt! With more new skiers, the triple chair, which serves beginner terrain, had a line of 10-30 people much of the day. The double remained ski-on, all day long.

One thing I’ve noticed this year at many mountains is that more people ski to last chair.  Really both first chair and last chair are busier.  It seems that people who are skiing, want to ski more than before.

There was a moment when I had both chairlifts in my sights. I’ve seen this before at Plattekill: lifts were full, with nearly every chair occupied, but lines at the base were minimal and there was nothing resembling a crowded trail anywhere on the mountain. It’s a magic formula for skier density.

I was surprised at the cover on the natural only trails. For such a steep mountain, Plattekill slopes are covered in a decent amount of grass, and the trails without snowmaking are skiable more often than you might expect. Even Freefall was good, whether you dropped in via the sketchy entrance or used Switchback to bypass the headwall.

We skied everything we could and more. After a long morning, we stopped for lunch and then headed back out. In the afternoon I barely mixed it up, mostly skiing the bumps on Plunge. Ridge and Plunge are both my favorites, but sometimes only bumps will do. When the double side went into the shadows, I skied the triple until close of lifts.

I had cleared my schedule, so I could stay for the Plattekill Ski Patrol Chicken Dinner Fundraiser at 5pm.  After dark, there were two different scenes happening. Outside on the deck, people were having a beer, enjoying a fire, and looking up at the stars.  The other option was the bar, with a rauckus and excellent band from New York City called the Lonely Birds.

I chose to rock out. I took my meal up to the bar and sat with Chris and Anya, John and Stacie and a bunch of other couples.  You know the thing where the more you like the music, the louder you can handle it?  The blues infused rock was so compelling, that people just stood up from their chairs to bounce around.  Finally, tables were dragged out of the way and a full on dance scene took place. It was a blast.

I haven’t been any kind of a “party-goer” for decades. For me this was more than party. It was a re-awakening of something that is basic and essential to human existence.  It was a reconnection with my tribe.

At the end of the evening, Laz told me I could join the torchlight parade as photog. It wasn’t easy and this shot below is one of the few I got that was in focus. I had this idea that being last would get me the best shots, and as I got farther behind, the results did improve.

Without a torch, if I got too far behind, I was in the dark and I couldn’t see what I was skiing on.  Macker, Matt and Winchcat Collin had groomed swaths up both Plunge and Northface for the parade. If you got off the grooming, skiing was much harder, especially without a light.

Thanks to patrol, who had strict instructions to be the last man down the hill, for letting me shoot the parade from behind. In every one of my shots you can see the last man in the line, patroller Tom Blackwell, looking back up the hill, watching out for me. Thanks to Tom and all of patrol for everything you do.

Plattekill is such a unique story, a unique business in many ways. I’m fascinated by their durable success. They’ve found a way to continue to provide what people really want and after all these years it hasn’t really changed. Plattekill is a genuine experience that’s built for strengthening friendships and making memories.

12 comments on “Plattekill: Back with the Tribe”