On New Year’s Eve, I drove to Lake Placid with the child for a short, socially distanced ski break. Lake Placid had only been brushed by the storm that dumped 30 inches elsewhere in the northeast. When we arrived Mt van Hoevenberg was operating on machine made snow on the new trail system designed in advance of the World University Games.

Everything at MVH is different this winter, and not just for the reasons you’d expect. I parked and walked to the towering new lodge. Part of the building is open, and construction is still underway. I collected my season pass and headed out.

From the lodge, you look across the stadium to the new biathlon range. If the weather had been clear, I’d have been able to see Whiteface in the distance. Around the stadium, people were figuring out how to clip into their rental skis, some taking lessons.

To start, I skied the flats around the stadium. This was only my second day on snow. Then I started going up. There are a couple of short loops with climbs close to the lodge. Then I found the main event.

As my late friend Colin used to say, “What goes up can keep going right on up.” Go around a corner away from the range, and 30 or 40 meters up the trail is a wall that’s sure to string out the pack. It’s like I never did all those uphill roller ski races, and all the interval sessions at the Snow Bowl. My heart rate in the stratosphere.

At the 1980 Winter Olympics, classic was the only technique; all the races except the relay were interval starts. Some wag once wrote, the cream of Scandinavian athletes, bright and shiny, would ski off into the woods only to emerge sweaty and near death’s door. The relatively narrow trails wind through the woods.

The new trail system has a quite different vibe than the legacy trails. For one, most races these days are mass start affairs, on short loops. Athletes loop back through the stadium several times, to the benefit of spectators and television. From the upper reaches of the open trails, you can see down to the biathlon range and the sliding track, as well as far off. 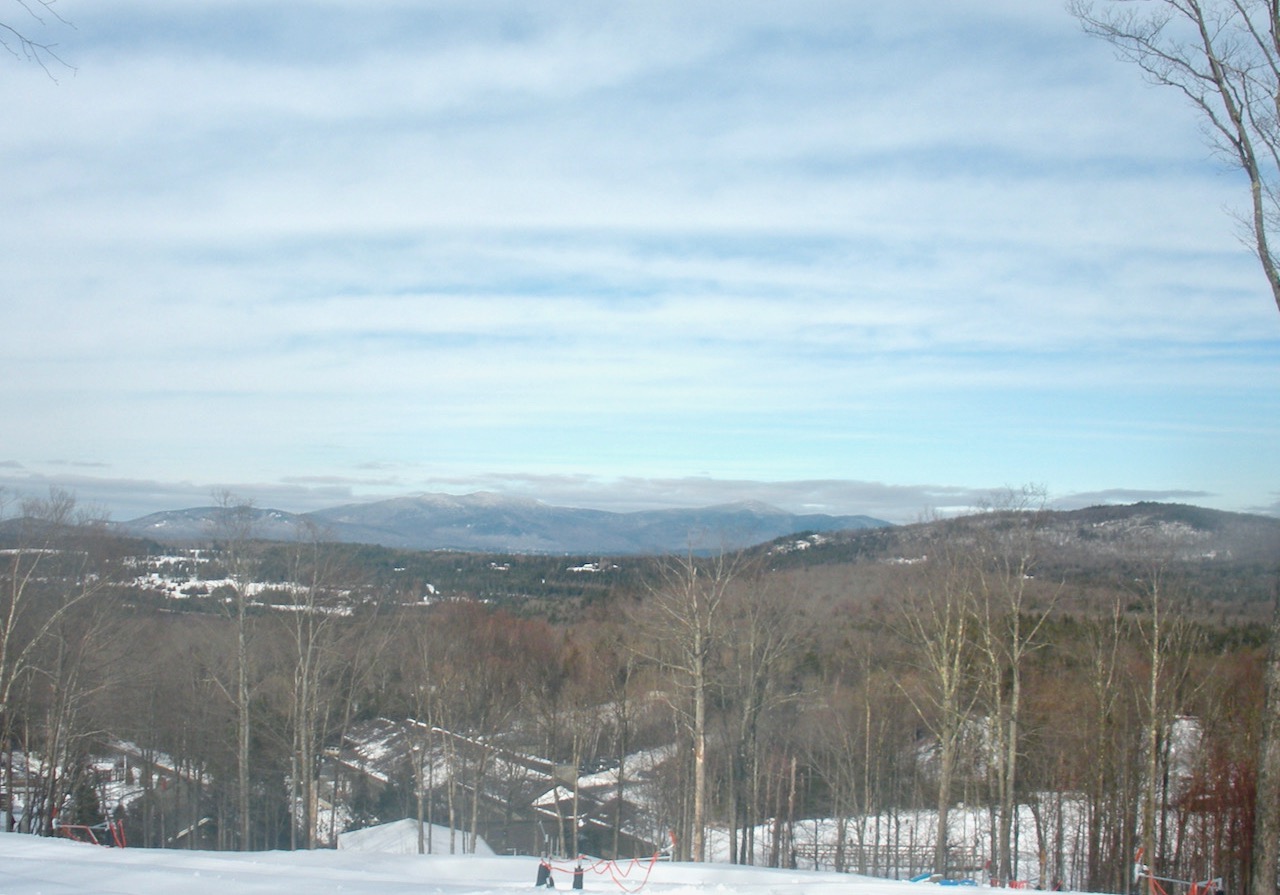 Just below the top, I passed the snowmaking reservoir. Cautiously I dropped in to the descent. The first section is take-no-prisoners fast, exacerbated by rock-hard fast snow. I checked speed, to no avail. Accelerating to what seemed like World Cup speeds I panicked, and the hill ate me up. It unnerved me enough that I sidestepped down about 25 feet before putting my boards parallel and hitting the apex.

Meanwhile, my Peru Nordic teammate, the Distributor of Pain, gave a master class descending that same hill with grace and speed.

The rest of the way down, my skis chattered over the frozen corduroy as I snowplowed. I wasn’t alone, many others snowplowed too.

After two hours of going up, and then down, my body told me it was done. I returned to lodging, collected the child, who had opted to sleep in, and we went to buy groceries.

Overnight, two inches of snow fell, opening up the easy trails on the old system. I kick waxed our skis, and off we went. We cut through the old stadium out to the Flatlander Trail. Smooth glide, easy kick. But as we got farther into the woods, snow began clumping up on the kick zones of our skis.

Kick wax in conditions around freezing has always been my Waterloo. I can only think that this occurred because we were on all natural snow, instead of natural snow over machine made. As we returned to the new stadium… no more clumping. Go figure. Returning to the new stadium, we tackled a couple of the easier hills.

“There’s a lot of hills here,” my young one observed.

“Now you can brag about skiing a World Cup course,” I replied. After a couple more kilometers, we packed it in and drove home.

When I saw that 14 inches of pow fell on Lake Placid, I organized a raid.

No longer a personal trainer, I’m an essential worker back where I started, in the retail wine business. Working weekends, I have to steal my ski days where I can. I prepared skis, breakfast, and lunch, and threw my winter sleeping bag into the shooting brake. On Sunday night before Martin Luther King Day, I lit out for the promised land. I made it as far as Glens Falls before crawling into the back to sleep.

Monday morning, snow falling through the open sunroof woke me up. I ate breakfast, drove the last 90 miles to the Ho. After warming up on the Flatlander loop, I hit the new trails again. What used to be called the Mini Loop has been widened to accommodate three athletes skating abreast as they leave the range, which takes you to the start of the new trail system. (This wasn’t available at New Years.) New snow over the granular machine made stuff made for much nicer skiing, even though my heart rate was consistently in lactic threshold territory.

I practiced descending the hill that ate me up at New Years a few times. Not pretty, but my confidence increased with each run.

After a couple of hours looping around, I veered off the new trail system to the lower section of Ladies 5k. The morning’s snow augmented a decent base, making for nice skiing. But suddenly, my body said, “I don’t want to go UP any more!” Descending off East Mountain was tame compared to the new trail system.

I finished off my day with a recovery ski around the easy trails, packed it in, and headed home.

Addendum: There is now food service at van Ho’s lodge, although it’s apparently not provided by the Green Goddess market. Except for the usual idiocy south of Kingston, there was none of the crushing traffic on the Thruway that one dreads on Sunday afternoon. Despite the photos I’ve seen of packed lift lines and this article, it seems less crowded than a normal winter. I’m already scheming my next trip to the Ho.