After a nice big storm in mid-December, I think it’s fair to say we dodged a bullet at the end of last week. A second big event, originally in the long range as snow storm, looked more like a sure thing for rain as it got closer. 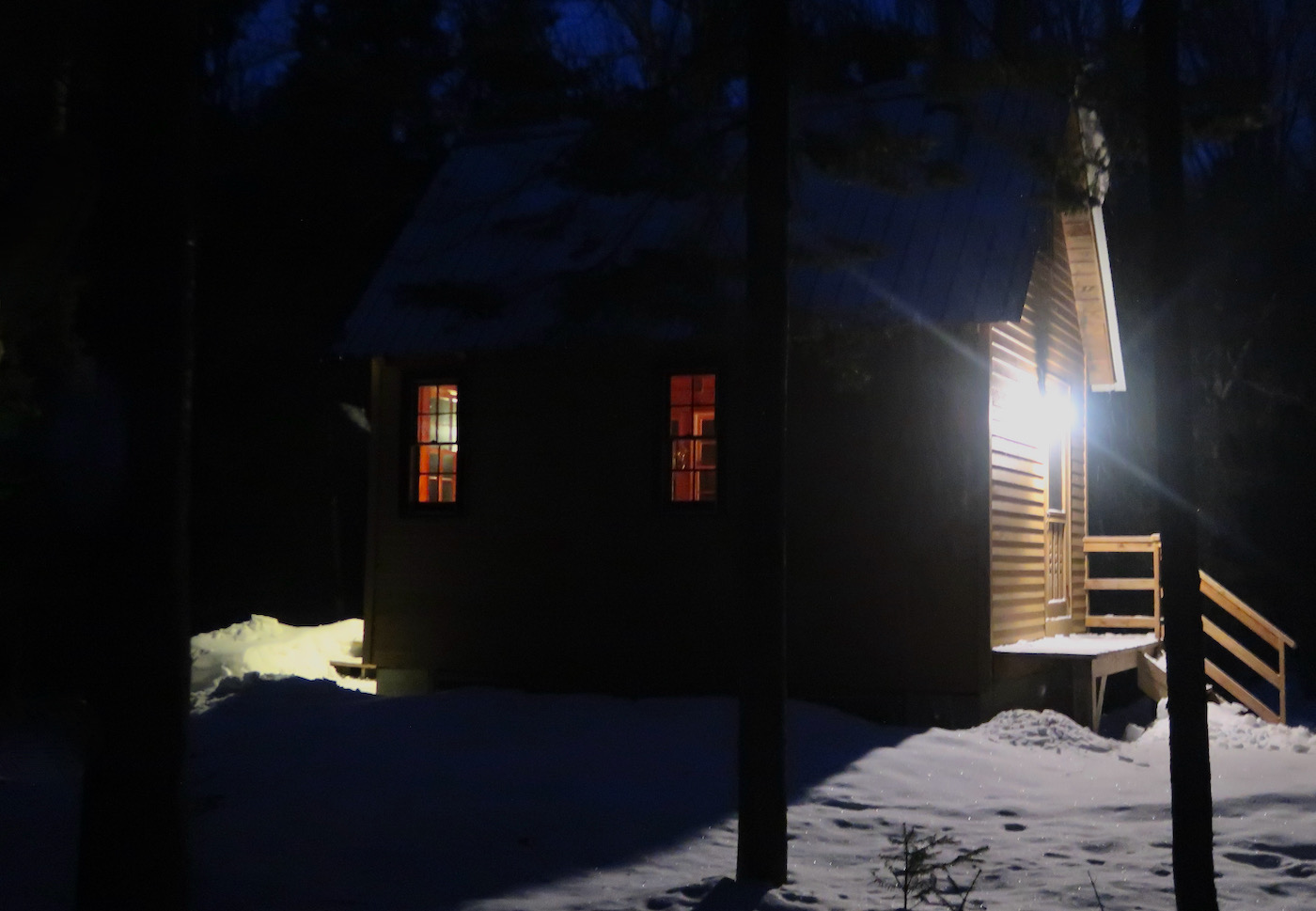 Then, at the last minute, the storm track moved a bit east. Not east enough for a full-fledged happy ending, but enough to deliver both front and backend snow in NY.

I’ve been watching NY snowfall radar for 20 years, and I’ve rarely, if ever, seen that kind of significant last minute reprieve, even if it wasn’t complete.

Like many of you, I’d been watching the weather for Christmas Week. It’s an important week, for me personally and the ski business in the east. That said, this is the east, so you kinda know what to expect.

This year is a little different for me. Normally we take the entire holiday week off, to drive to the Adirondacks to ski Gore, and ski in our woods, if there is natural snow. This year our teenager has other plans. My wife Zelda proposed that she stay home to cover the parenting duties, so I could chase any opportunities.

That’s quite an amazing offer. It’s certainly appealing to me as a skier, even as it’s a little sad for me as a dad. Our daughter is a junior in high school, and there’s not too much time left for family skiing. Time marches. 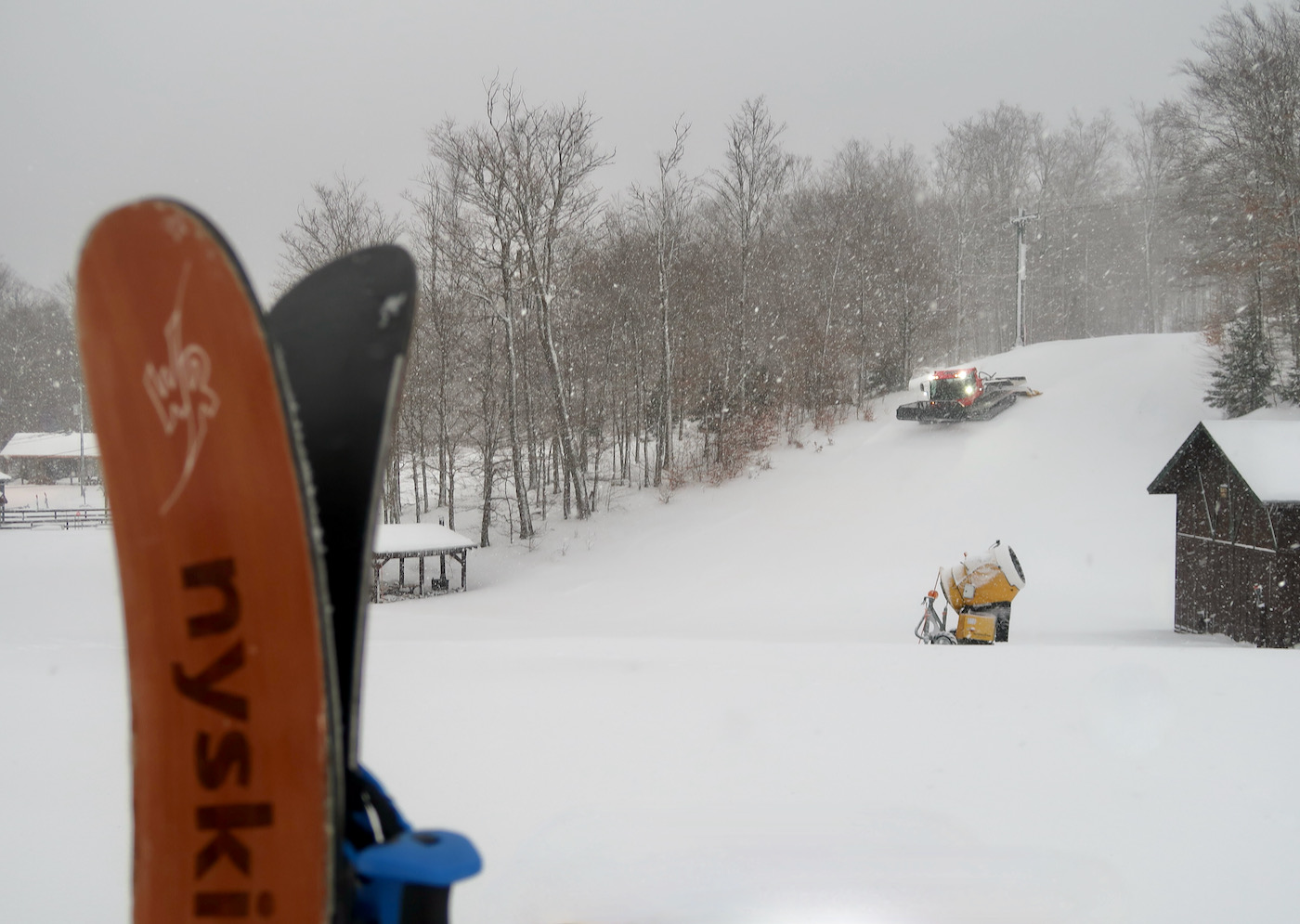 With another warm and wet storm in the forecast for the weekend, I considered another logistics-heavy NY ski, to grab some soft snow, while I could. My first thought went to Dry Hill, the 300 vert ski area with a Hall Double Chair on the northern end of Tug Hill. I’ve never skied there, and the forecast for Watertown was for more than 4 feet.

Boo Wells, the new owner of Dry Hill assured me that the hill would be skiable and it would be all-time. But her final communication gave me pause: “We are going to open — unless the roads are closed!”

On my way up into the mountains Sunday night, I encountered a UFO, in the strictest sense of the term. Ten miles from our camp something large and white fell (flew?) from the sky and slammed into the front grill of my Honda, bounced off the windshield, and flew over the top of the car. It was loud and it scared me, but I didn’t feel like it put me in any real danger.

The dashboard lit up like a Christmas tree, as the CRV’s danger sensing radar, mounted upfront, was clearly an additional casualty in the encounter.  No cruise control, forward impact protection, no lane-guard. I have to admit the auto cruise is one feature I really rely on for long highway drives.

When I reached the cabin, I checked out the grill, it was broken alright. I lit a fire and cracked open my laptop looking for weather beta on Dry Hill. The overnight forecast was for another 12-18 inches and the web cam was still going off the hook. With my equipment compromised from the collision, I called an audible, setting my alarm for McCauley. It gave me another hour and half to sleep, and a decent shot at a good ski day with less driving on the backend.

All weekend I’d been watching the radar, focusing on McCauley, Snow Ridge and Dry Hill. McCauley and Snow Ridge looked like they’d been seeing a steady stream of light snow, at the edge of the lake effect band that was pounding Dry Hill.

This was really a hit and run mission, so I never charged (or had to drain) the plumbing. I actually keep a few jugs filled with water at our camp for this purpose. I got up in the morning, dressed to ski, packed up and hit the road by 6:30. It was snowing lightly in North River, and it continued all the way, west to Old Forge. At ten after 8, I was in the lot at Big Mac hoisting my skis to my shoulder and getting excited about the light new snow that covered everything. By then it was coming down pretty good.

I was the only one around, save for Barbara, who greeted me with a smile; she told me the lodge was open and to let myself in. I booted up and headed out to the ticket window to wait for the 9am opening. At 8:45 the sign in the window flipped from “ticket window closed” to “tickets sold here.” I grabbed my proof of purchase and I glided down the hill to ride McCauley’s beautiful Hall double chair.

It was just me and patrol. The trail report only showed three trails open, so I was pretty direct. “What’s all natural and skiable?” The answer came back: “Try Lost Trail and God’s Land.” Thank you very much, sir. Patrol got on the lift first, and I caught second chair.

I went right down to Lost Trail. It’s one of the lower angle glades, and I figured at low tide, I should start cautiously. I took it very slowly. It skied really well, and I didn’t hit bottom, all day in fact. There was a foot of absolute blower lake-effect snow on top of a very solid, rain-soaked base.

I poked around that whole side, everything off Challenger, looking for the lowest angle terrain I could find. Eventually I went back up the hill to ski God’s Land, the steepest natural terrain marked as open.

At the top of the double, I ran into greymoose and his son Oscar, the Air Force pilot and aerial photographer. He’s finishing his training for his first flight piloting our country’s biggest bomber, the legendary B-52. We worked our way through the Rambler Glades and other gentle terrain in that area.

As usual, I hadn’t eaten much, and by 10:30 I needed something.  I bid goodbye to my only ski partners of the day. Stevie U, McCauley’s friendly GM, agreed to take a break from loading chairs, to talk to me, up in the Chalet, after one more lap.

We caught up on what was happening.  Of course, in the summer of 2021 the legendary ski tuner Olympic “Louie” Ehrensbeck passed, and in March of this year, Olympic was renamed Louie’s Olympic Run.  Otis, the affable lifty, was on the mend from a knee replacement and Steve hoped to have him back in some capacity soon.

We talked about terrain.  He wished he’d had more open, but the second half of November into early December was warm for everyone in the east. I told him I was happy, the mountain was 70% open and skiable, if not listed as such on the trail report.  Steve felt he should only list a trail as open, if he’d made sufficient snow on it.

The last thing Stevie said to me was “make sure you ski DeCamp.” I hadn’t even considered it.  I headed over there and found a thin, yet delicious mogul field, with a significant amount of manmade snow, and that nice layer of natural on top.  I skied it five or six times until just before closing, when I could no longer turn. On my last run, I skied down Mighty Mite right to my car, and tossed my skis in the back.

Pro tip: If your ski shop is backed up two weeks on tunes, like my shop in NJ, bring your skis to McCauley, and get them tuned while you ski.  I got a smooth and flat base grind on my daily drivers, at a fair price, fast. On a holiday. Think about that.

I continue to find myself in awe of McCauley.  This small but steep mountain, is in a very snowy spot, with legitimate black terrain that is strewn with boulders. Instead of trying to “improve” the trails, it’s tradition to blow deep on those boulders to make them skiable. Just as cool, McCauley maintains their trees well; the low angle stuff is often good-to-go when you wouldn’t expect it.

I’m also inspired by the structure of the place. McCauley is publicly owned by the town of Webb.  Support for the mountain is not something imposed or mandated from above.  The mountain is buoyed by a ground swell of support that rises from the towns people. They think of the mountain as an essential service, like roads and schools, and every child in town skis free until they are 18 years old. There is nothing quite like McCauley.

9 comments on “McCauley to the Rescue”