The cliffs of the Trapps escarpment glowed pink with the sunrise as I drove up the Thruway. When you work weekends, you ski on Tuesday. With the impending holiday, I wanted to get at least one more day on skis before the end of the year. 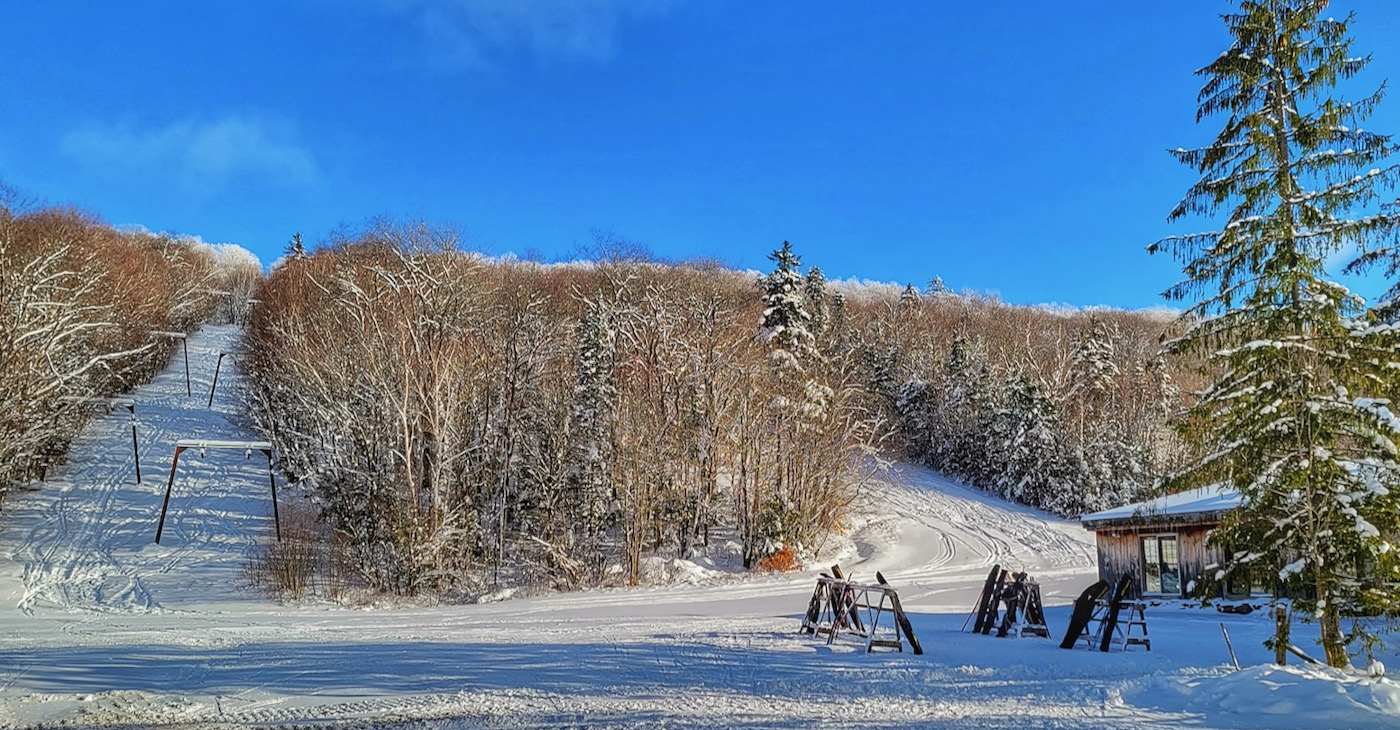 Between New Paltz and Kingston, a Volvo station wagon hurtled past me, going 85 mph at least. The vanity tag read “TREESKI.” I know Harv favors Honda CRVs, who else might it be?

Diving off the Thruway in Troy, I had smooth sailing up Route 7 towards Bennington. In Pittstown, I saw the scar of land where the long-abandoned Moon Wink Motel had been demolished.

Closed for decades, in later years it had apparently been a haven for squatters. The old sign was classic mid-20th century design, a winking, smiling moon, as if approving illicit assignations far from Troy’s prying eyes.

Like most of the northeast, Prospect had been starved for snow. Then, the previous week, 19 inches dropped. Steve and Al broke their backsides to plow out the lot and groom. In an embarrassment of riches, a couple more inches of pow had fallen overnight. I clipped into my skis and set out.

I saw Vinny’s boot bag in the lodge, but no sign of him as I set out on Woodpecker. The plan was to alternate easy laps on the flats with harder ones going over Chickadee backwards, and up Workout. Snow hung heavy on the trees, and the sharp crystals made for slow skiing compared to the ice at Mount van Ho two weeks ago There was so much that my pole plant would go a foot below the surface of the snow. So much snow that a Pisten Bully couldn’t compact it everywhere. Talk about first world problems.

After around an hour, I arrived at the start of the Mountain Trail to the summit. Originally, I hadn’t planned to go up. But the conditions were too good not to. A fool’s errand; off I went.

With its gentler grades, the smart money usually climbs Shea’s get to Prospect’s summit. I prefer ascending the Mountain Trail, which is steeper and narrower. In the right conditions, the Mountain Trail is relentlessly fast downhill. Once, I saw someone descend it with a full pack.

Two kilometers from the start of the Mountain Trail until the intersection with Hawthorne. I herringboned and diagonal skated a lot of it, but my heart rate still went higher than I would have liked. There are flat sections here and there, but not enough to really recover. As much easy training as I do, it remains difficult for me to keep my heart rate down when skiing.

At the intersection, I turned left for the short obligatory side trip to the summit. The wind was blowing, and I was wet and cold. I turned and headed for the glide into Hawthorne.

Although the trails on top of the mountain are wide enough to skate, they retain a backcountry vibe not found down low. Over the summer, Steve made improvements to Hawthorne and Danish Delight. From the Mountain Trail towards Danish, Hawthorne trends downhill. Some of the turns that had been sketch in the past were wider, and I could take a better line. At the final plunge to the next intersection, I veered right on to Danish Delight. Here, the trail had been shortened a bit.

I hit the last sharp turn on Danish and skated the flats and gentle uphill back to Shea’s. A mellow downhill, and I could take time to grok the scenery. A hard left, and a climb to Boomerang. A fast descent across the old alpine trails, opposite direction of the FIS loop. Hard right down Steffen; hard left at the bottom.

When I re-emerged on to Woodpecker, I felt as though I’d emerged from a snow cave on to a highway. I wondered if this was a different trail. Sure enough, Steve told me that he widened Woodpecker to accommodate racers skating side by side.

Usually, I’m good at moisture management, but I was sweating and freezing. That was enough for one day. I saw Bruce, along with Vinny one of the infamously fast Berkshire Boyz. We caught up with the goings-on in our lives. Then it was time to go.

4 comments on “Prospect Mountain: Too Much is Just Enough”