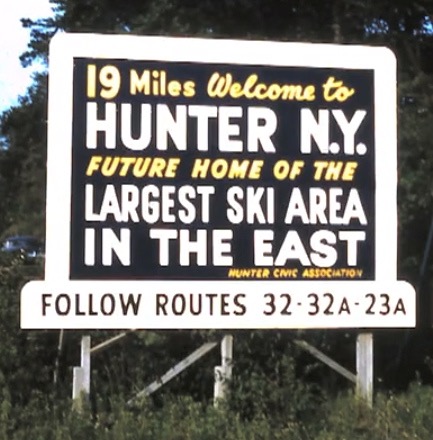 In 1905 Isaac Slutzky moved from Manhattan’s Lower East Side to work on a farm in the Northern Catskills. Within a few years he bought his own land and began to raise his family. In 1909 his oldest son Israel was born and his younger brother Orville was born in 1917. Israel and Orville developed a love for skiing early in life. They fashioned their own skis, which they attached to their boots with leather straps. They climbed the gentle slopes of the farm and slid down.

By the mid-1950’s the sport of skiing was gaining popularity in New York and across the northeast. A group of businessmen, lead by Orville and Israel, developed plans to create a ski resort at Hunter Mountain. They lobbied New York state to push the project forward. State-run Belleayre Ski Center had opened a few years earlier, and was attracting a fair number of skiers each winter. In 1957 and again in 1958, the state studied the idea of opening a second ski area, but concluded that Hunter Mountain was too steep and rocky. Project backers sought investors through other means including soliciting developers through advertising in the New York Times. This effort was also unsuccessful.

Orville and Israel came up with another idea. They contacted Denise McCluggage — a sports editor at the New York Herald Tribune — to pitch a story. They proposed giving the land to any developer who would build a ski area on Hunter Mountain. In the spring of 1958, Denise wrote the article for Ski Magazine about the town that had a mountain to give away, and had no takers. The article attracted a lot of attention, and investors, many from New York City, signed up to buy stock.

Construction started in the summer of 1959. Orville and Israel gave the land with two stipulations: that the project be named the “Hunter Mountain Ski Bowl” and that it was equipped with snowmaking which was new technology at the time.

The Slutzky Brothers’ Construction Company built the facilities. Larchmont Construction installed the snowmaking and two Poma-Savio chairlifts. The old Starr Hotel was renovated to serve as the base lodge.

On January 9, 1960, Hunter Mountain Ski Bowl opened for the first time with the original “B” Lift in operation. The “A” Lift was still under construction and wasn’t ready for the first season. Hunter’s first snowmaking system had limited functionality, and a short 30-day initial season was followed by only 60 days of operation the second year.

After three short ski seasons, few visitors, and mounting losses, the Hunter Mountain Development Corporation declared bankruptcy. But the Slutzky brothers were not deterred. In the middle of the 1961-62, season they took full control of the ski area. Hard work and consistent marketing yielded longer seasons and more skier visits. During the summer of 1962, the “A” lift was completed. This opened up the skiing to the top.

Izzy and Orville were relentless innovators, who were willing to try new things. In 1963, they pushed the envelope again when Hunter opened for summer skiing on plastic chips. Summer skiing lasted only a few years. During the winter of 1963-64, Hunter Mountain opened for night skiing for the first time which continued until 1972. Hunter gained huge national exposure in January 1964, when Kitty Falger, a Hunter Mountain ski instructor, appeared on the Tonight Show to teach Johnny Carson how to ski.

In the summer of 1964, construction of the present-day base lodge began. It featured a 300-seat dining room, an indoor swimming pool, sauna, health club, and massage rooms. The “D” Lift opened in December 1967, the first triple chair at Hunter Mountain. That winter, Hunter became the first area in the world with top-to-bottom snowmaking with the completion of water lines to the summit. In addition the “East Side” was developed including East Side Drive, The Milky Way and the steepest run on the mountain, K27, which averages 34 degrees over it’s full length.

By the mid-1960s business increased dramatically. The brothers reinvested profits to grow the business. New trails were cut, including the opening of the Belt Parkway and more snowmaking was installed.

In the summer of 1969, construction of the trails on Hunter West began. It was opened with the “Z” Lift for the season. With the addition of Hunter West, the area joined the ranks of the Northeast’s major mountains. That summer, the Summit Lodge was constructed.

In 1980, Hunter Mountain became the first ski area to have snowmaking coverage on 100 percent of its trails. In the summer of 1987, The SnowLite Express Quad was built to replace the A Lift. In 1989, Hunter became the first area in the U.S. to install an automated snowmaking system. The system installed on Racer’s Edge by York International is operated from the Upper Shop.

Hunter continued to upgrade in the 90’s, adding more lifts, trails and shops to the property. During this time there was renewed pressure to develop the mountain further. A proposed amendment the state constitution to trade land closer to Hunter’s true summit for holdings elsewhere was opposed by environmentalists and failed to pass the legislature. In 1999 Governor Pataki put the idea to rest by designating much of the Catskill High Peaks as Bird Conservation Areas, to protect Bicknell’s Thrush and other threatened bird species.

In 2002 Hunter completed a new learning center, housing the ski school, ticket sales, child care facilities, equipment rentals and a cafeteria, all with ski-out access to Hunter’s beginner terrain on Hunter One.

During the summer of 2010, Hunter replaced the Snowlite Express with high speed sixpack chairlift from Leitner Poma. The following summer the mountain added another 150 new snow guns and made improvements to the terrain park. The biggest upgrade was the installation of a new high speed quad on the west side to replace the Z and Y lifts. The new lift was actually a reincarnation of the former Snowlite express, which had undergone extensive renovations and new station designs.

On the day after Christmas in 2018, the newest lift pod, Hunter North opened to the public. The new high-speed six-pack rises 1,000 vertical feet and services 5 new runs. The expansion increased Hunter Mountain’s skiable acreage by 33 percent, and also adds an entirely new entrance and parking lot with space for up to 250 more vehicles.

Hunter Mountain’s increase in acreage and terrain was largest ski resort expansion in the east coast States in more than a decade. Hunter Mountain the only ski area in New York with feature two 6-passenger chairlifts.

In the summer of 2019, Vail Resorts acquired Peak Resorts including Hunter Mountain. Since that time Vail’s commitment to Hunter’s reputation as “the Snowmaking Capital of the World” has come into question. In the past Hunter would routinely opening terrain faster than most other mountains. In 2010, Hunter went from zero to 90% of terrain open in eight days.

Hunter remains a lynch pin in the local economy and much of the commerce in the village of Hunter centers around the ski area and its year round activities.

26 comments on “The History of Hunter Mountain”