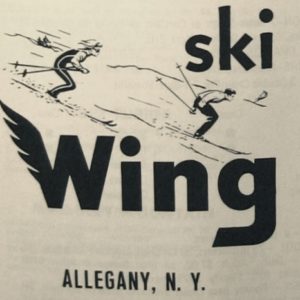 I learned about the Ski Wing Murders in a roundabout way. This summer we’ve been working on the NYSkiBlog Guide, our directory of all kinds of historical data. One goal is to make progress on our Western NY Ski Areas section during this offseason.

In the process, we’ve come across information about some great looking NY ski areas that are now gone. Places with Holiday Valley vertical and more than 100 inches of snow in an average year. This peaked our curiosity.

This story is about a NY ski area that was best known as Ski Wing, even though the area had three different names from 1958 to 1993. The story is both tragic and incredible.

The now defunct ski area in Allegany, N.Y. began as the Grosstal Ski Area.  Grosstal is German for “big valley” —  an 813-foot vertical drop with a challenging headwall, an enticing trail map, one chairlift, two T-bars, a rope tow, night skiing and snowmaking. The complete package in Western NY.

The ski area operated as Grosstal from 1958 to 1968. The owners claimed the mountain was “designed to rival the famed ski centers of the Alps.” Grosstal took on Holiday Valley promoting their vertical by comparing it to Holiday’s 750-foot number.

Mathias Hefti, a ski racer, played a big role in developing the Grosstal Ski School. Before coming to the US, he was a professional skier with the Swiss team.  He immigrated to the US in 1962, coming to help coach the US Olympic team and to teach skiing at Magic Mountain. In 1963 he was offered the opportunity to head the new Grosstal Ski School in Allegany NY. With experienced skiers from Europe in charge, the ski school was highly regarded.

The resort was one of the first to make snow. In those days Grosstal would coordinate snowmaking schedules with local industries to avoid damaging the regional power grid.

In 1968, there was a tragic accident, when many were hurt and a young boy died as a result of a chairlift slipping backward. The ski area was closed and then sold to Mr. and Mrs. Henry Stein.

The Wing Ski Club, was a separate private ski club with its own building, located adjacent to Grosstal.  The popular social venue was known for it’s youth ski racing team, the Wing Cup and après ski parties.

When the Steins revived the ski area, they re-named it Ski Wing.

In 1975, the Steins divorced and Henry Stein took full ownership of the resort. He changed the name to Wing Hollow. Winters were generally exuberant and fun until 1978, when Cattaraugus County’s most infamous murder dominated the headlines.

One cold night in February of that year, two young men were working overnight, grooming. Sometime after midnight, the groomer broke down and they came off the hill to look for a part to repair it. Unfortunately when they went back into the lodge, they interrupted a burglary in progress.

According to the sister of one of the victims: “A couple of weeks before this happened, there had been another break-in. Some teenagers were caught and when he saw someone had broken in again, he may have thought it was the teenagers again.”

There was a struggle and both employees were killed, shot from behind with a revolver that was never recovered. A janitor who came to work at 3am found the bodies of the two young men.

The circumstances of the burglary led police to believe that the crimes were committed by someone with knowledge of the location. The target of the robbery — a heavily fortified safe, hidden under the floor — was chipped out of the cement it was cast in. The safe was eventually recovered from the river, but had been cut open and $18,000 was gone.

The murderers were never captured.

Even though this tragedy took place at Wing Hollow, the incident seems to live on as the Ski Wing Murders. There were actually more good years of skiing before Wing Hollow finally closed in the early 1980s.

12 comments on “The Ski Wing Murders”