The Goon Jam Tour kicked off last weekend, at Snow Ridge in Turin, NY. The Goon brand and tour was created by style savant Lucas Magoon and his wife Tonya. The tour quickly garnered attention with its positive vibe and high profile riders on the roster.

Tour stops are at independent resorts across the country, there is a focus on supporting family-owned while spreading the love of snowboarding.

Despite the warmup throughout the week, the Goon crew, along with Snow Ridge and the Flower Skate Shop guys worked into the night on Friday to set up the park.

The park was absolutely dialed in and without knowing the location, you could have mistaken it for Carinthia or some larger resort’s park.

To keep the action firing the guys from Towpro were onsite with their portable rope tow. This thing is sweet, slinging riders up the hill to take as many laps as they can until their legs give out.

With the stage set, I made my way to Tug Hill, early Saturday morning. One trail and the bunny hill, but when I pulled into the parking lot it was one of the busiest days I’ve ever seen at the Ridge. A mix of families for the day and park rats for the event.

At the registration table I linked up with Flower Skate Shop guys, as they cleaned up features putting the final touches to the park. I hung out and snapped pics, as more familiar faces rolled in. We headed up the lift for some warm laps.

Nick and the team were making snow like crazy, with the cold weather coming back. Only the South Ridge was open and groomed, but the corduroy was soft and edgeable. I’d say all good considering the 40 degree swing in temps.

Soon enough it was 11am and time to kick off the jam. Everyone was rounded up, the format was laid out and the starting siren sounded.

The mix of riders made their way up the hill and then tricks got tossed. Locals and out-of-staters alike were throwing hammers and the hype was real, everytime one was landed. I saw flips on jibs, guys clearing huge gaps to rails and a variety of other very technical rail tricks.

After the first hour only the hardcore remained. The focus shifted to individual features, the riders sessioned the creeper rail, before moving on to the down-flat-down.

A crowd had gathered as the final riders left nothing in the tank and before long the 3 hours was up.

The group made their way into Tavern 230 for the awards. Winners and losers were all smiles, as riders recalled their battle with a particular trick and congratulated each other on their triumphs. Lucas got on the horn, announced the winners and handed out all the free swag. 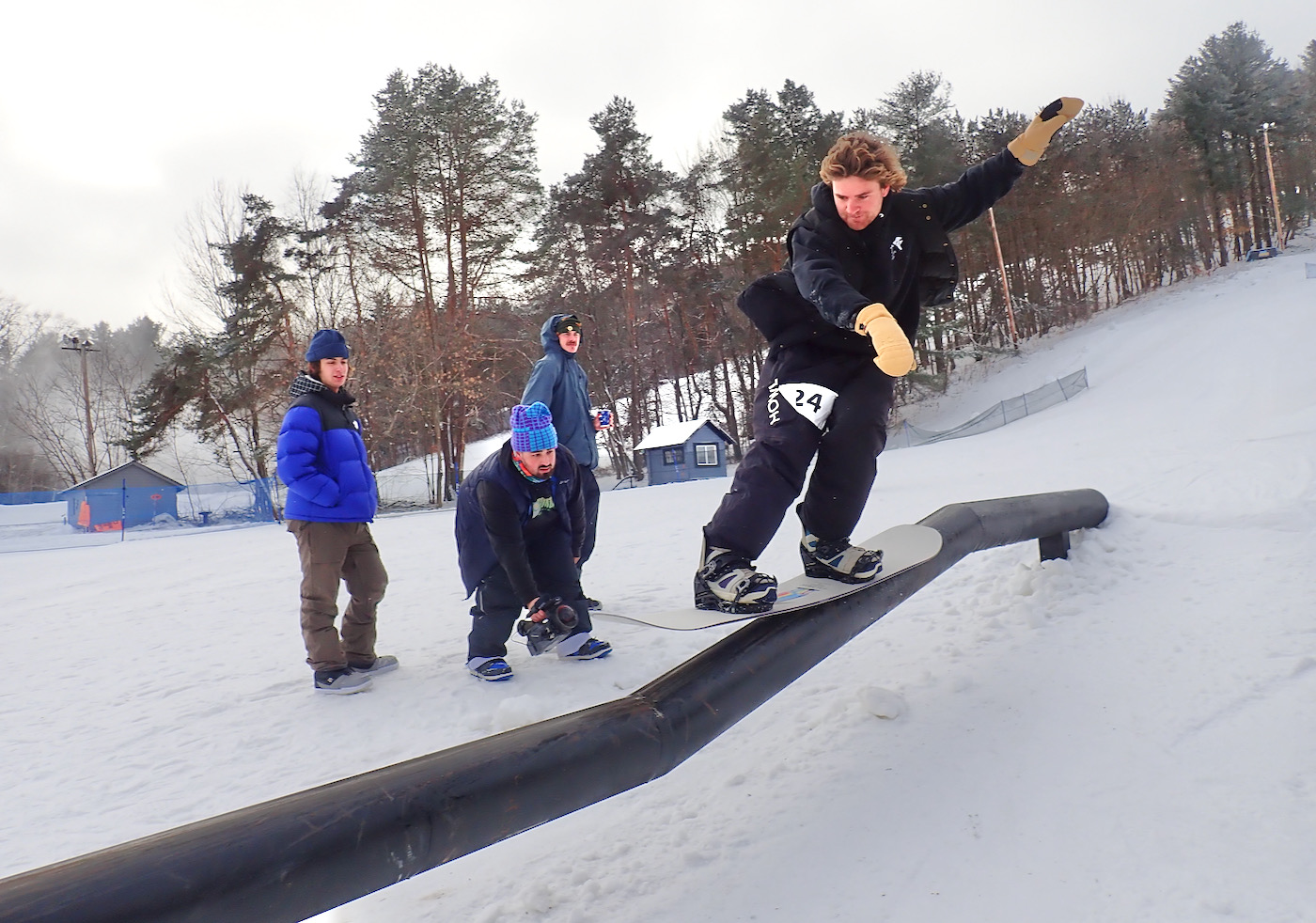 It was a great way to finish the day and just left me wanting to get out and ride more. Before leaving I checked with the Flower guys to make sure they were still doing their Spring Park Jam.

6 comments on “The Goon Jam Tour at Snow Ridge”