In the now-maligned 1999 film, The Matrix, the main character (Neo) is given a choice to swallow a pill that can continue his journey down a rabbit hole or another to return to his former life. Sometimes I feel a certain affinity to the tale. I too continue down towards the (mostly) unknown, visiting small ski areas that were off my radar a few years ago, in a country that is not my own. 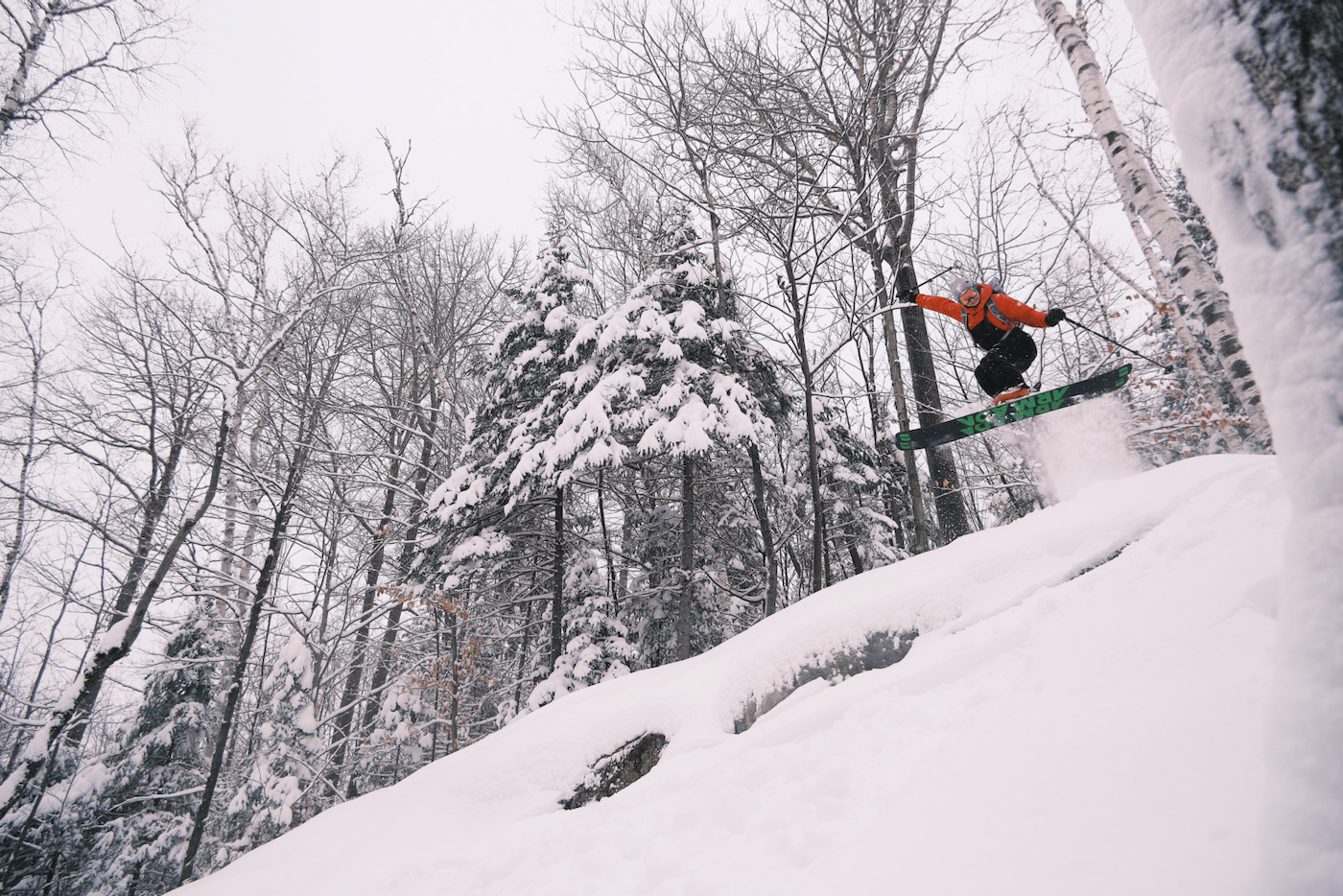 In the movie there’s a phenomenon known as “A Glitch” that takes on a special importance. If you were to notice something happening in a repeated way, you should take special notice of it since it could be important.

During the film this event was almost certainly something bad, but I see no reason why one couldn’t look for A Glitch to happen foreshadowing a positive event as well.

There have been close-call storms this year. When the forecast predicted rain again in Montreal it looked eerily similar to a storm two weeks ago that gave me the best lift served powder skiing I could remember – all close to home! 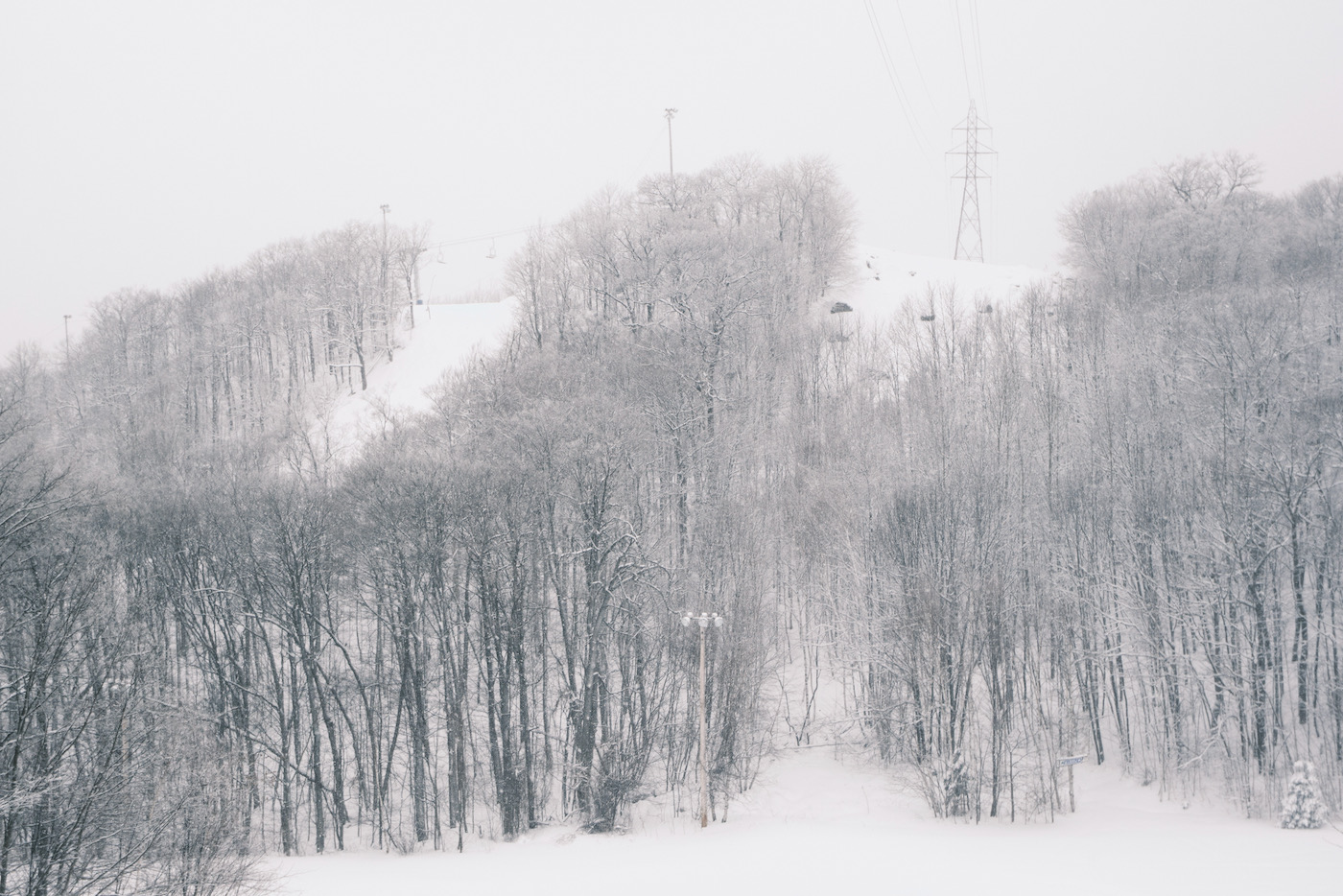 I reminisced about another storm from last season at a mountain hidden in plain sight off of the highway 15 — Sommet Olympia. Ten months ago that I scored a major jackpot, impossibly bluebird skies and light dry snow. The only “problem” was having no one to share it with. Actually I had no one to share it with until, like Neo, I found a like minded crew of pow obsessed rippers that shared my dream of freeriding hidden stashes.

Months had passed, but I wrote to the big air catching “Morpheus” of that day, to see if he wanted to get an early lap. Thoma agreed and we were to get an hour of touring before the lifts opened. There must have been some villainous agents working the Highway 15 to wreck my chances of getting in early. 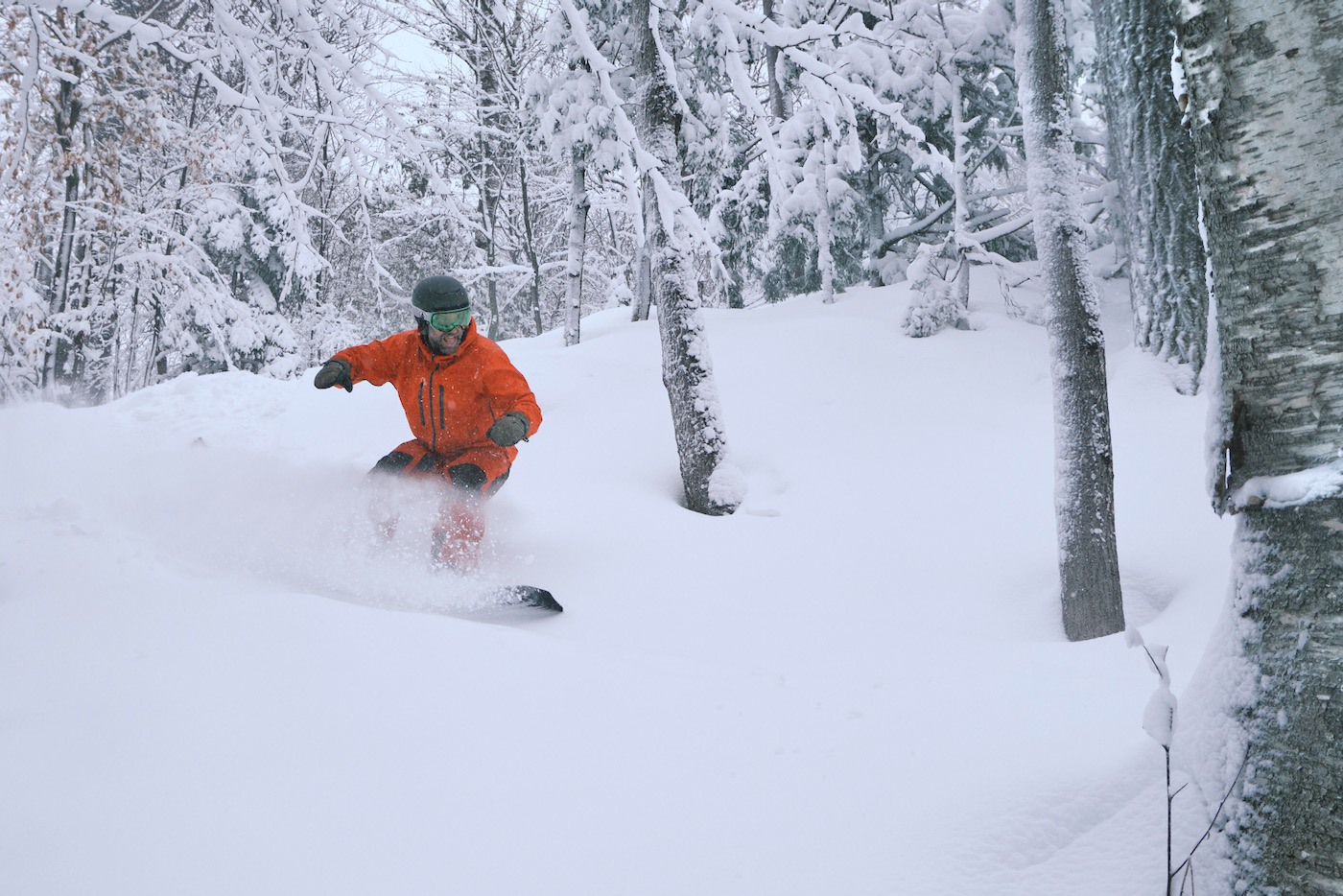 To my surprise, Thoma was waiting for me. I was as bewildered as I was grateful to find out that he declined to ski without me, preferring to wait for company. I have always preferred “Happiness only real if shared” to “No friends on a powder day” and having like-minded company waiting for the skin-track is one of indescribable kindness.

Our path was set for the uphill, and the falling snow was taking a slight pause. We passed through a long birch glade to arrive at the summit as the lift was starting to deposit the first skiers (more agents?) at the top. The race was on, both for tracks and for my company to get to work. 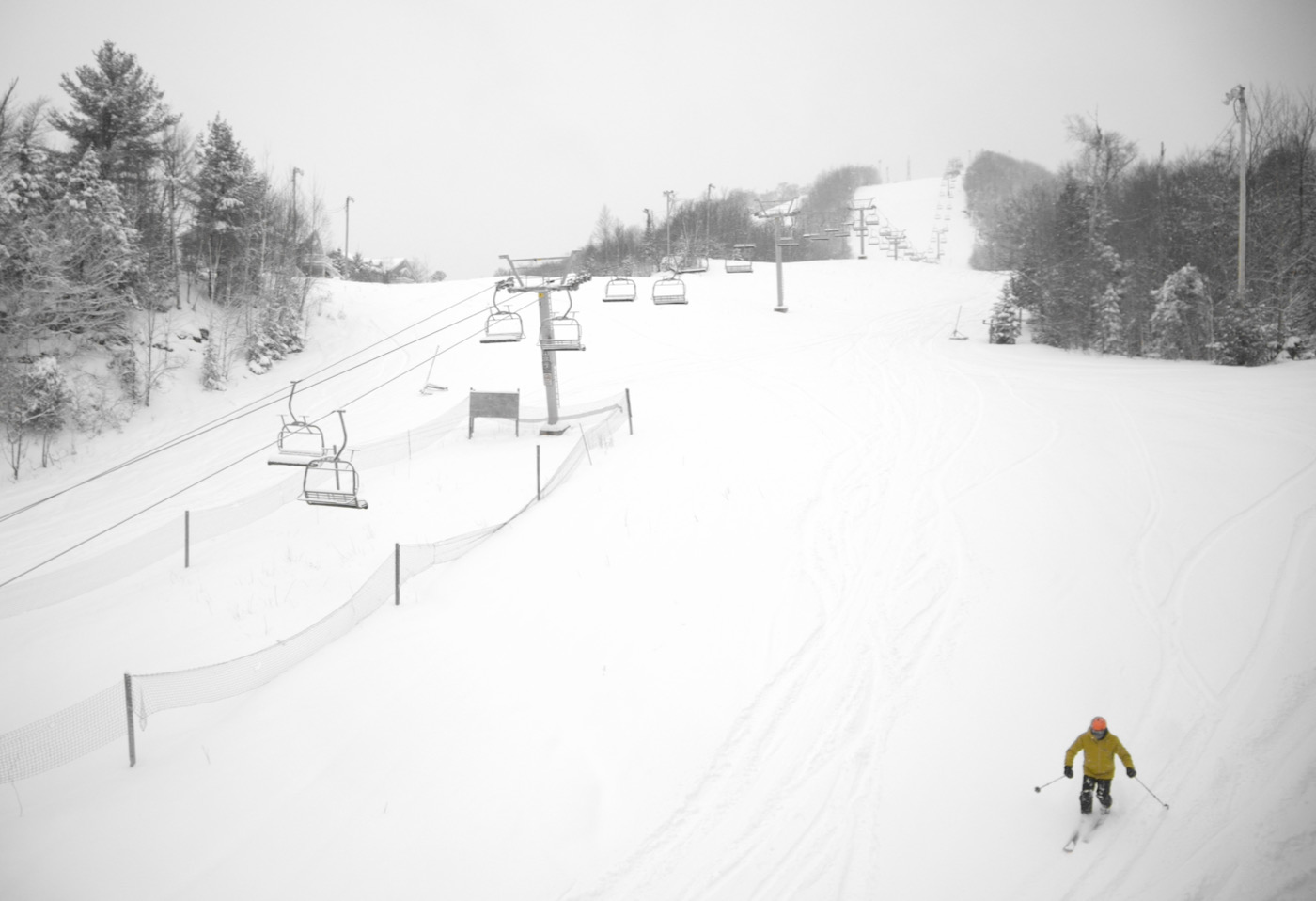 A patroller (another agent?) stopped as we stripped our skins, ensuring we had proper clearance via RFID. It was a close call but fortunately my pass was with me. It was time to ski. It was easy to make the most of what we had, we carved a blank canvas through rolling trees and steep dropouts before parting ways.

What would happen in the rest of my day solo in The Matrix? Fortunately, just like in the movie when the heroes visit the free town of Zion, new allies appeared, this time in the form of two snowboarders down to shred. I had been standing under a powerline waiting to get a particular shot when JP and Hugo flew by me as I was packing up my camera. 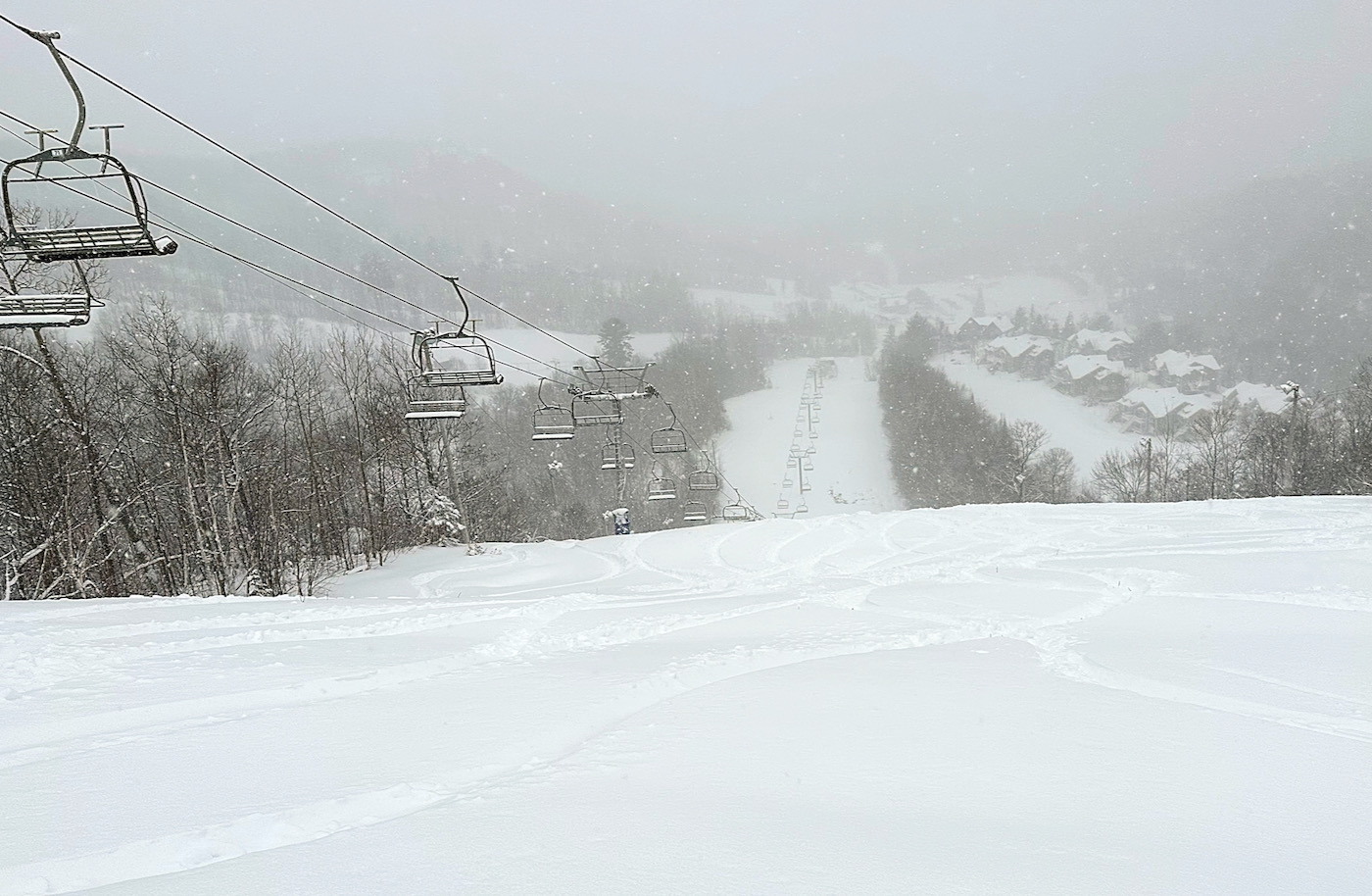 I hurried through a glade to catch up to see if I could catch a run with them, and they agreed. We caught a few more fast laps sending everything we could find. Skiing with them was special, not only were they talented riders but they had a real knack of carving around each other without any fear of what the other would do. It was a solid group, and I was again grateful to meet some cool Quebecers to share an extensive exploration of the little peaks.

In The Matrix, one of the crew (Cypher) betrays Neo, as an agent had promised that he could go back to his former life if he gives up the heroes. I don’t think that there were any defectors in this crew but I would take any reason for snowy sequels.