Every spring when the season is over, I head to the cabin to turn off the heat, stack the wood for next winter and get the trails in shape for summer. I’m productive enough, but really it’s just another reason to return to my favorite place in the world. 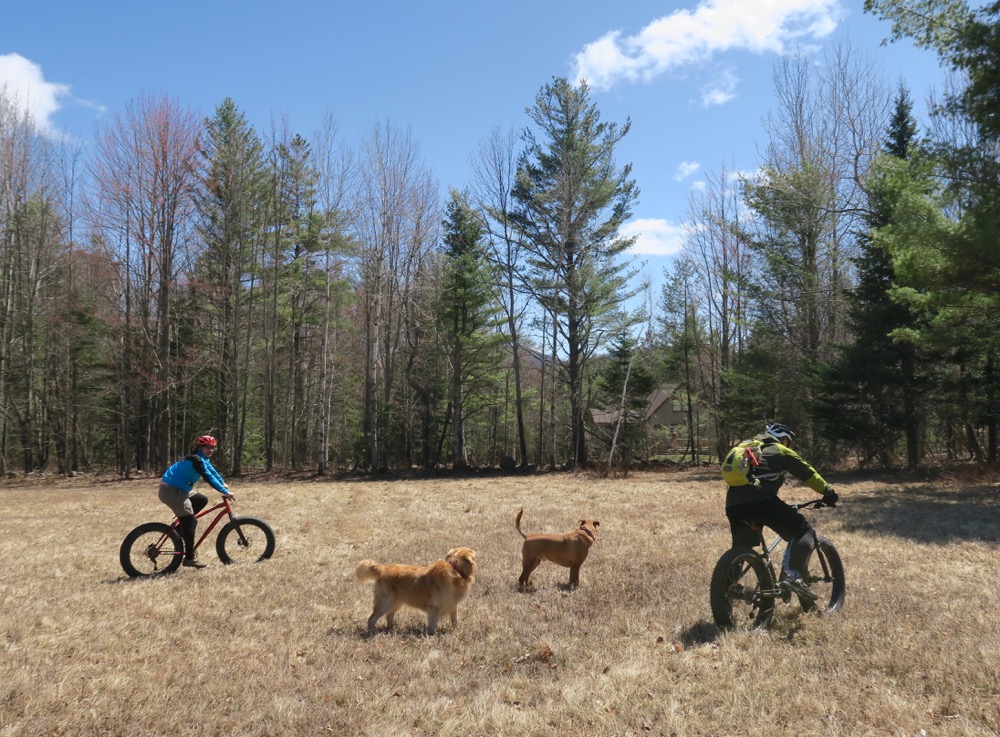 Traditionally the spring work weekend was in early May, before the black flies had their game on. But over the last ten years the bugs are emerging earlier and we’ve moved spring weekend into April. Even this year it hardly feels like the ski season is over.

I arrived Friday afternoon and took a quick walk of the yellow trail. It was dry and I was surprised to find little deadfall; small consolation for the thinnest winter in memory.

When I woke on Saturday morning, it was gray, but the forecast was for clearing skies. I had my coffee and then rode most of our trails. After my ride, I stacked the wood for next winter, a full cord. We are ready to go.

In the early afternoon I met the Son of Pitches at North Acres Farm for a ride around and up Garnet Hill.  As usual, I arrived a bit early for first tracks, alone on the farm.

We assembled, eventually, to climb 1000 vert to the top of the hill. Up we went to the top, then plummeted down to Thirteenth Lake to soak in the view and let the doggies get wet.

We traveled back to NYSB headquarters to ride our home cookin trails and polish off a six-pack. We finished the evening in town with burgers at sunset.

I rose early the next morning, packed up the cabin and headed over towards Vermont. It was a sunny day, but it felt just a bit cold for ideal spring corn.

I arrived at the KBL lodge, I couldn’t help but notice the object of my fixation over the last seven days: Cascade. It’s known for delivering up some rain groomed sweetness after the gondi is closed for the season. I’d had the run of a lifetime there in May of 2013.

My plan was to ski a run or two, take some pictures, and then connect with SkiRay and the Adventures when they arrived. I was hoping to convince Ray to hike to Cascade with me for a day or even season ender.

I thought the best snow was the softer stuff on Skye Hawk, Skye Lark and Bittersweet. Cover was thin in spots but the snow was easy to turn.

By late afternoon temps had warmed up enough to produce a steady stream of smiling poachers walking down the Cascade Runout. By then I was nearly spent and looking to save any reserves for the long drive home.

Once again skiing will continue into May at Killington. Once again, Killington is delivering the late season goods, a deep base wrapped in a friendly Umbrella Bar vibe. If I’m done, I’ll take it, a great season ender.