The Adirondack High Peaks are a mystery to me. Seen from afar, they are both vast and tiny, occupying a fraction of the otherwise enormous park. Even with the stunning density of 4000 footers accessible from the Adirondack Loj, they’re both in your face and utterly inaccessible. 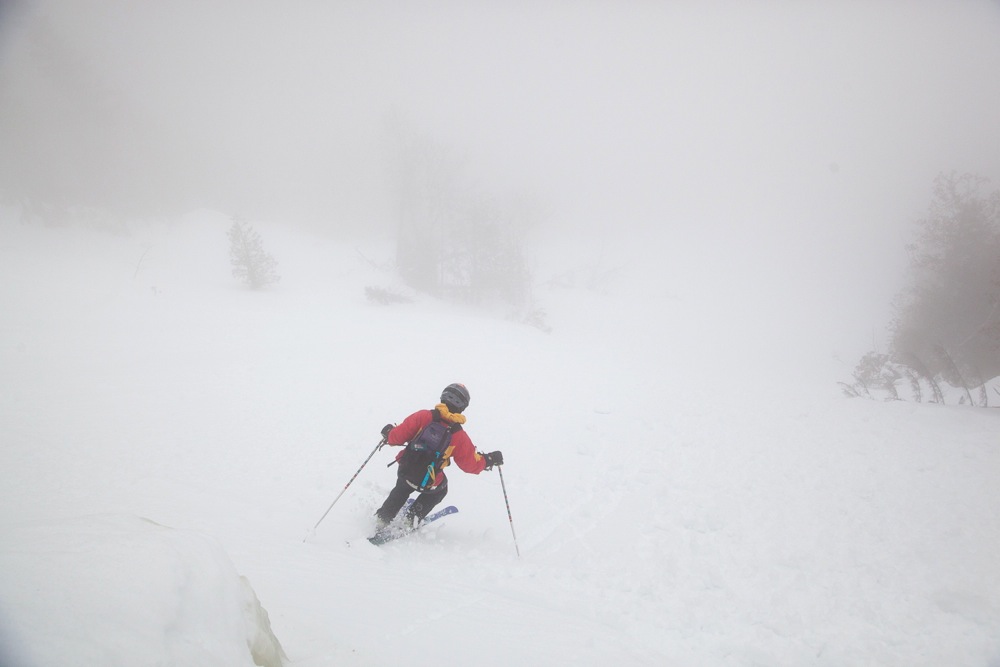 I know this well as many of my backcountry trips to the park end with epic workouts and fantastic stories, that often don’t have much to do with the skiing. This day on the Wright Peak Slides was no different.

Last Sunday I had a bag packed with technical gear for my first ski descent down the Trap Dyke, but my body hardly felt up for the task and a familiar sense of a mission unaccomplished set in its place. Rather than continuing up from the Marcy Dam to pursue Colden, our group allowed me to present a case to try the Angel Slides on Wright Peak instead. 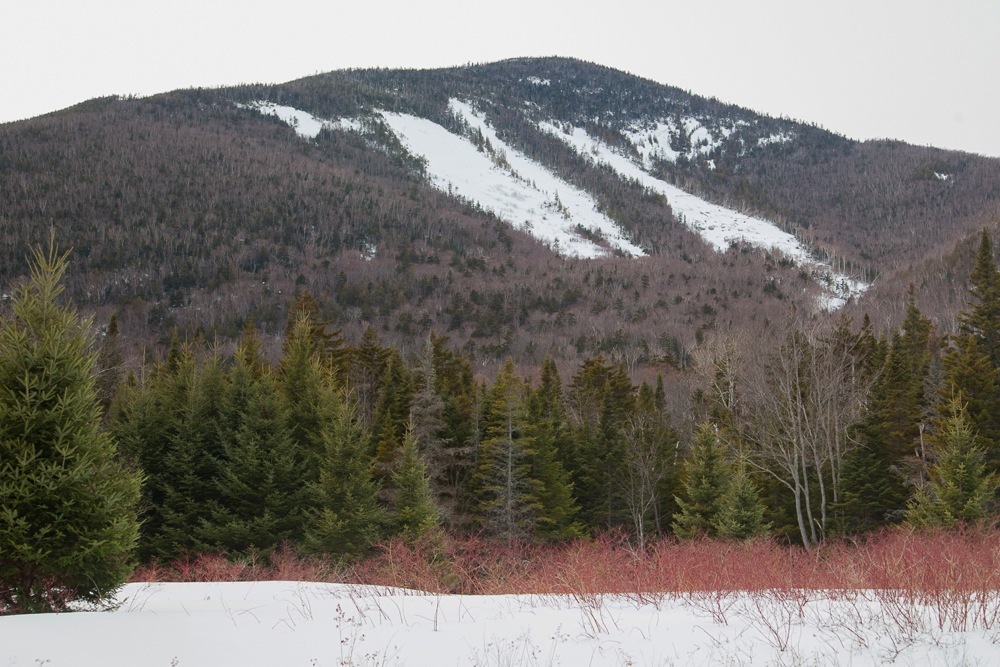 VT-Freeheel broke trail from the lean-to with the enthusiasm of a mountain goat, while I lingered in the back. I’d like think his energy was something akin to an animal going in for a kill that he’d long stalked, as the man had seen these peaks from across the pond for years without skiing them.

As we approached the slide through the birds-nest of avy debris at the base, clouds engulfed the mountain. As we were pondering our ascent, two friends descended, reporting that “it wasn’t the worst snow they’d ever skied.” Hardly enthusiastic. 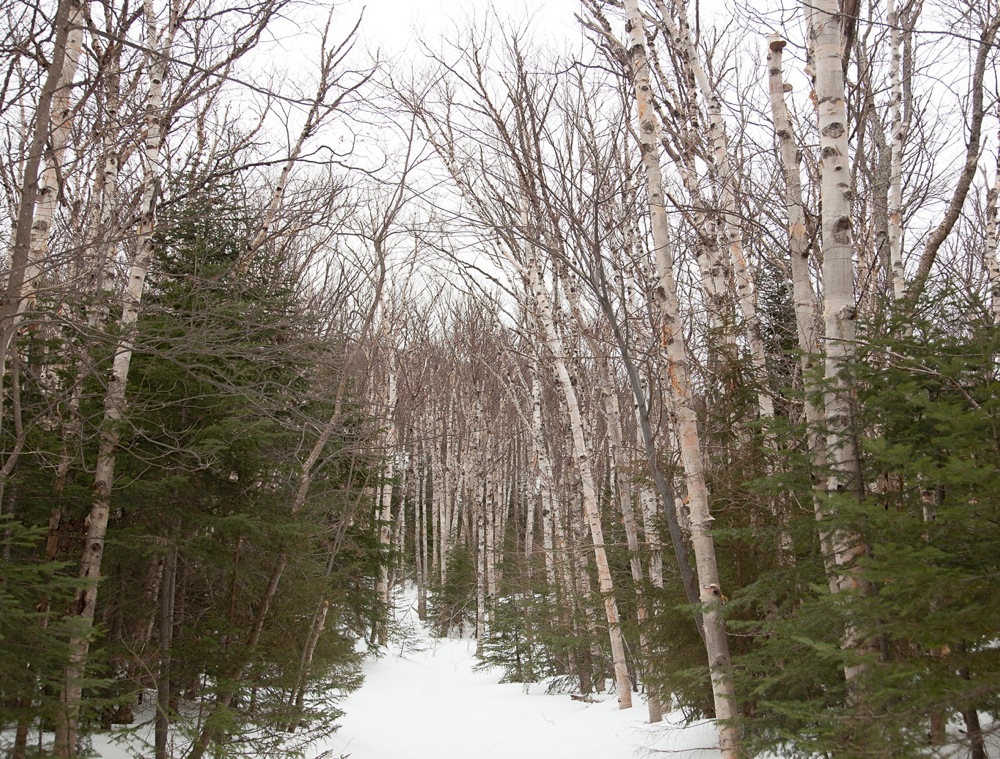 My brother Paul decided he’d had enough of his front toes bashing into his unfamiliar touring boots, and left the two of us alone to skin our prey.

Black Diamond’s glop stopper wax was no help with the sticky spring snow, but my partners enthusiasm for the climb was infectious. At the same time my costume had been transformed from backcountry skier to Eddie Izzard; the pasty snow balling up into twelve-inch high heels under my ski crampons. 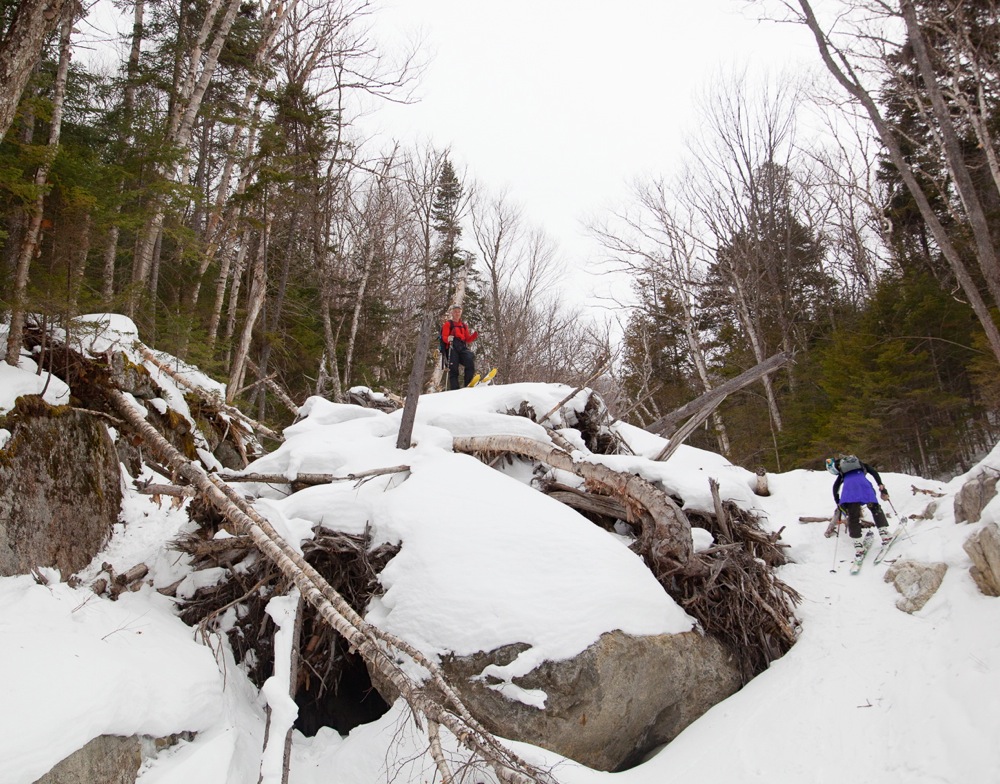 The clouds created an alpine feel, even if we didn’t intend to break treeline. We were alone in a gray and vertical world, the slide even steeper than I remembered it from my last frozen spring ski.

Fortunately, when we emerged through the coniferous forest on the newest slide, none of the roller balls or ski tracks on the other slides were present, and a blank canvas was our reward. 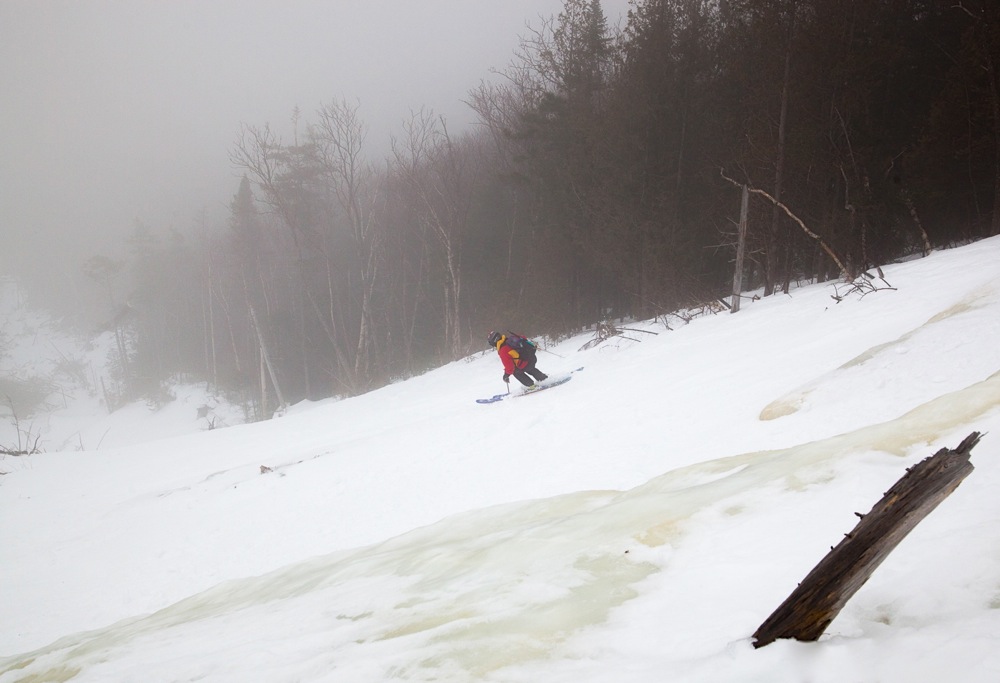 Skiing required a balance more perfect than most, but the season and terrain put a spring in our turns that earned us our tracks as much as the up. Even if we deserved a second helping of the days porridge, we decided to push back to camp instead. I’d rather get one good run than ski two sloppy and dangerous. They say you can’t ski yourself into shape but you can’t do it on a treadmill either, unfortunately.

Nothing in the ‘Dacks is ever easy, but it is always memorable, and sometimes very good, even when you don’t expect it. You just have to be ready to earn it.

4 comments on “Spring Slides: Wright On!”