“You come all the way up from Jersey?”

The guy who accosted me on the Publik House’s patio in Ellenville, NY, was some years older than I, sporting a bushy white beard and minding a high-spirited grandchild. I slumped in a chair, contemplating a hard-earned post-run meal and adult beverage. 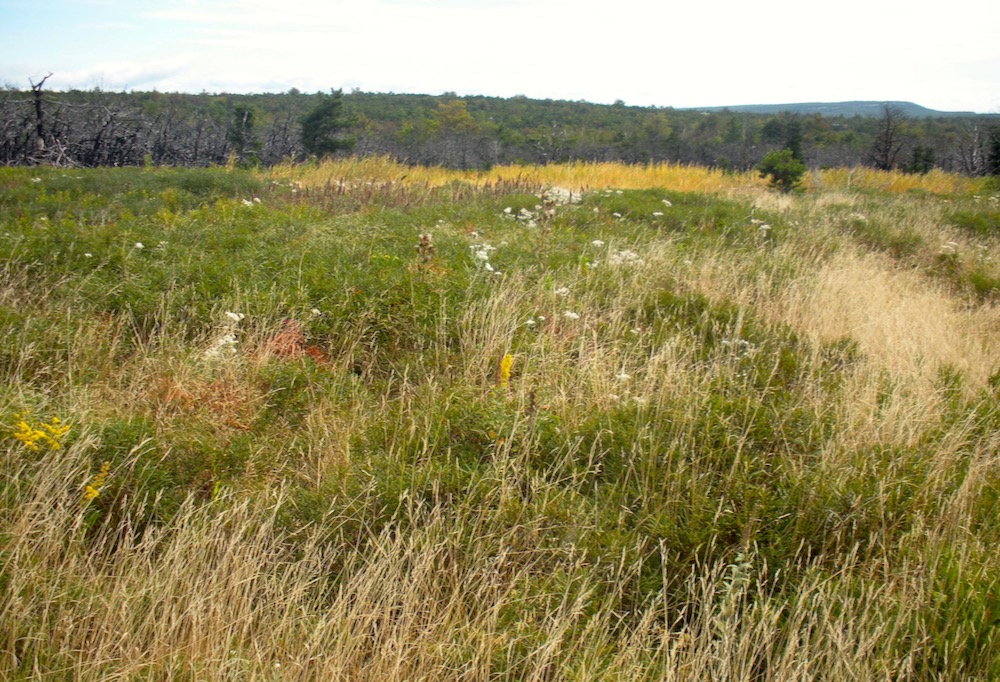 “Yeah… I’ve been in the eastern side of Minnewaska a lot, but not so much the west side. Were you a berry picker?”

“Yep, a long time ago.” He sighed and looked into the distance. “There weren’t so many rules then.”

From about 1875 to the early 1960s, Sam’s Point was one of the summer bases for people who camped on the Shawangunk ridge to pick huckleberries to sell in downstate markets. On an earlier foray into Minnewaska’s western zone, I’d come across detritus of human habitation in the middle of nowhere. I asked my friend Gary Jacobson, a longtime Rosendale resident; he suggested that I read “The Huckleberry Pickers,” by Marc Fried. If you’re into oral history, it’s a fascinating book. 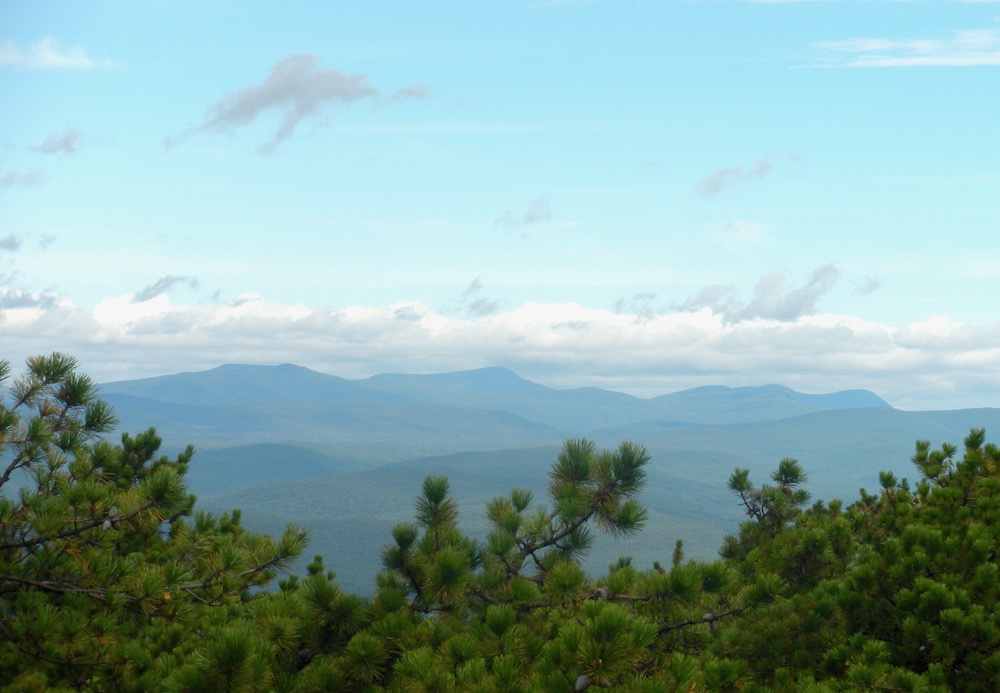 The land I was running on had originally been owned by the nearby village of Ellenville, to protect Lake Maratanza, its water source. The Open Space Institute bought it and subsequently transferred management of the land to the state in 2015. I set out on a gravel road, originally cut by the Civilian Conservation Corps (CCC) during the Great Depression.

Cool weather and a nice breeze were a welcome change from the stifling weather of August when I set out from the Sam’s Point visitors’ center. The old CCC road is well maintained to benefit workers who maintain communication towers nearby. Huckleberry bushes crowd the edge of the road, next to scrub oak and the pitch pine trees that are a hallmark of the Shawangunk ridge. Within a half mile, I came across a tumbledown house that had once been more substantial than the shacks Fried described. Further along were two deteriorating berry pickers’ shacks.

Further up the trail, there was more evidence of human habitation, then nothing. The shacks had been seasonal temporary residences, way more rough and ready than what passes for a north country camp nowadays. After I passed several communication towers, a mile or so out, the road reverted to a nineteenth century wagon track. At three miles, I turned on to the High Point Trail.

Gary had told me that this was the wildest section of Minnewaska park, and he was right. I was alone on singletrack that verged on herd path. Pitch pines crowded out the huckleberry bushes in some places. The terrain is not unlike a desert; the trail map even calls it “The Badlands.” There’s no tumbleweed or cacti, but the vegetation is low and you’re exposed to the sun. 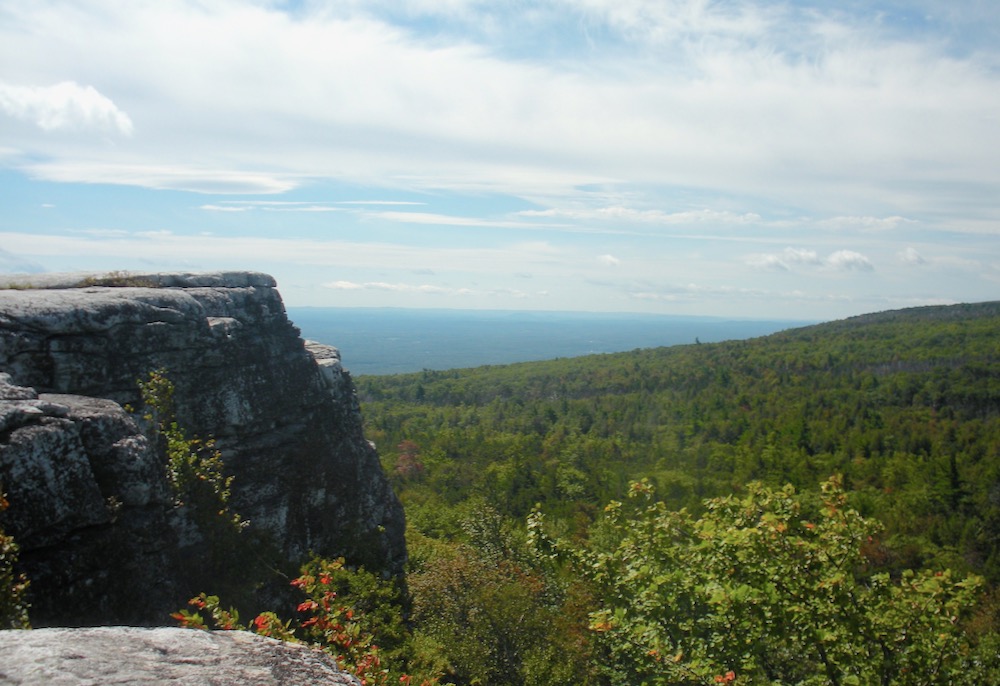 After the easy running on the road, it was a slow mile before I topped out on the eponymous High Point. Who would have thought you’d have 360 degree views less than 100 miles from the city? To the north, the Catskills, the mountains with one side. Ashokan Reservoir glistened in the morning sun. To the east, the hills on the far side of the Hudson River. Below, the loop road I’d been on, snaking through the berry bushes.

From High Point, it’s a long, gradual descent to the next trail junction. The vegetation changes, with birch and other trees coming into the mix. There are jaw-dropping views along the way. At the intersection, I toyed with the idea of heading to Lake Awosting, but turned towards Verkeerder Kill Falls. This bit of trail take you out of the high elevation ecosystem into forest, and in less than a mile, you’re at the falls. 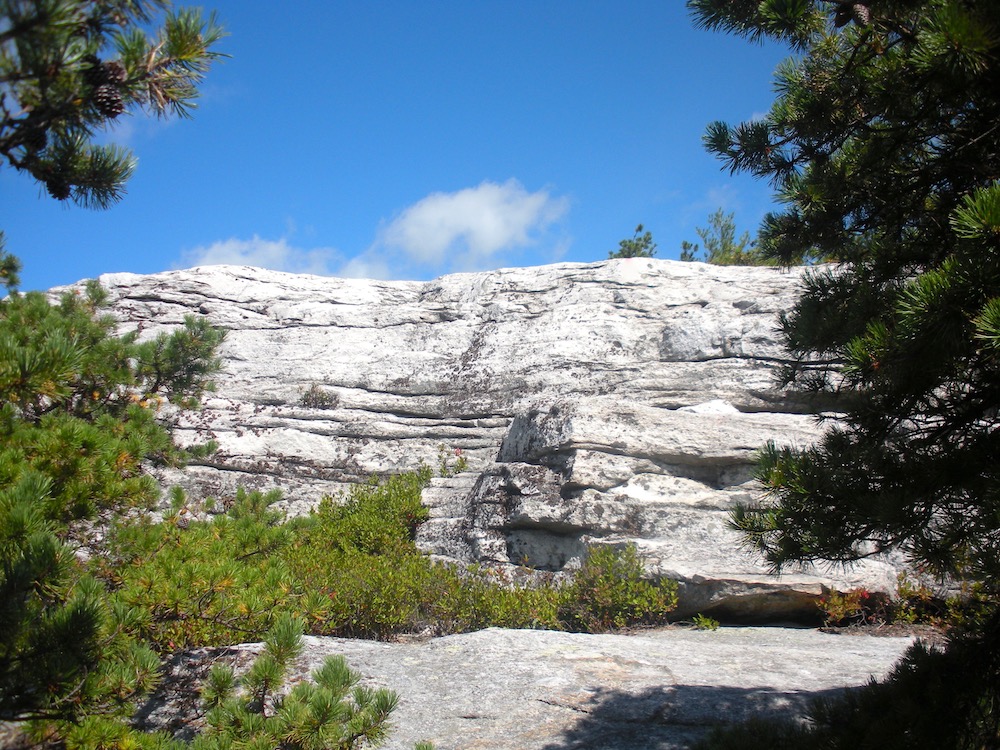 Instead of a raging cataract à la Niagara Falls, it’s a quiet, burbling stream that tumbles over a steep precipice. Perhaps it’s the time of year. A young guy was doing yoga moves in the middle of the stream; some post modern hippies were upstream, chilling out.

It’s all uphill back to the loop road, and the number of people I encountered marks the falls as a popular destination. Unfortunately, I also had to collect litter along the way. Sorry, but I draw the line at toilet paper.

Gradually I came out of the forest back to the ridge top, dominated by an ocean of berry bushes pierced by the occasional pitch pine. An easy jog along the loop road, and I was back at my car.

The Sam’s Point loop is a bit more than nine miles and took four hours, including ample time to pause and grok my surroundings. If you go, be sure you have enough water. The falls was the only viable water source I found. Trail running shoes are sufficient, but the sneakers one wears in the gym won’t cut it in the technical bits. And be sure to arrive early: the parking is small and fills up on nice days.