Normally, on the weekend around my birthday, I’d be celebrating at the Climb to the Castle on the Whiteface Toll Road. The new normal has changed all that, but I still wanted to get outside. 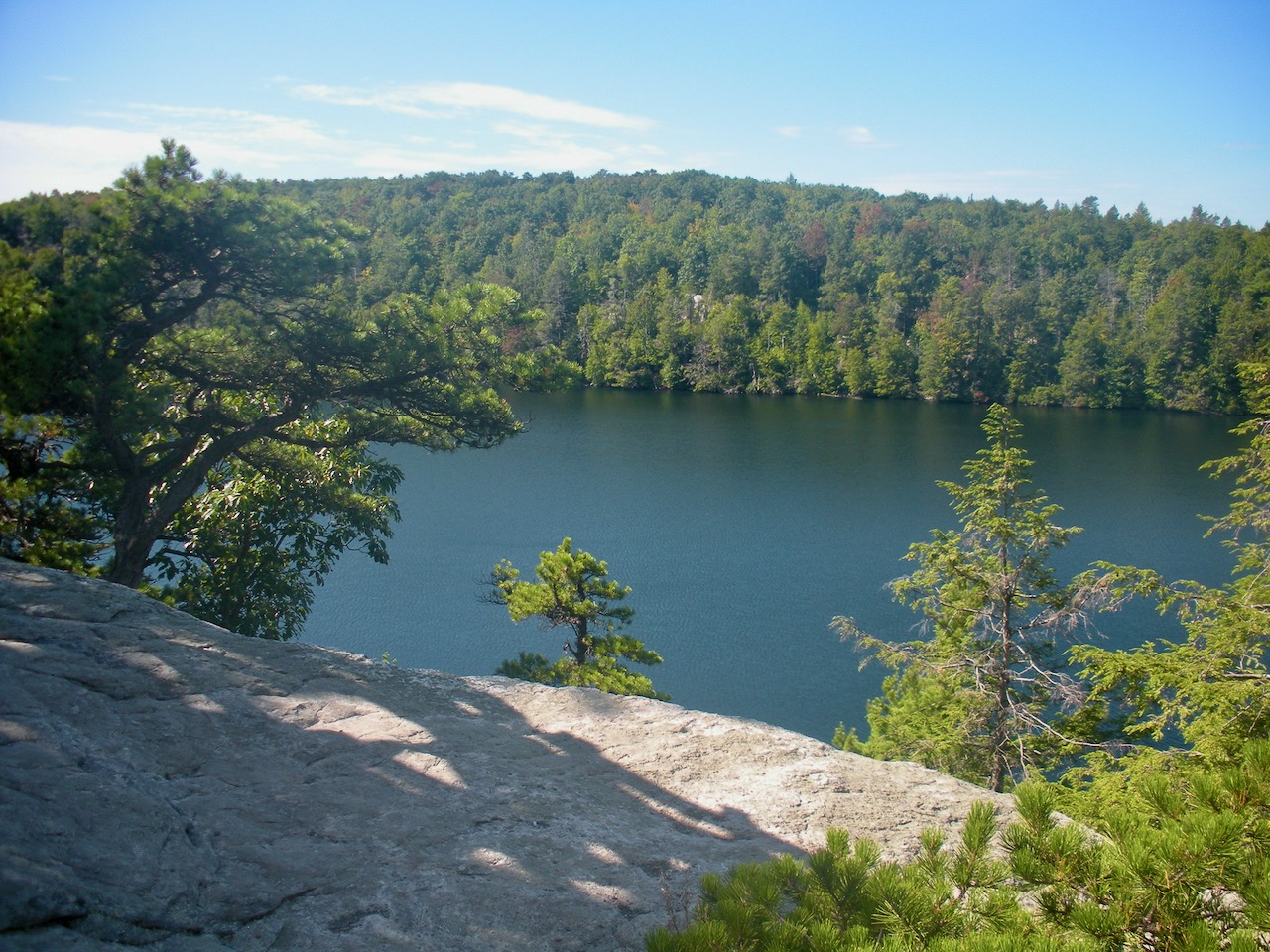 Unfortunately, at the end of running the Slide-Cornell-Wittenberg loop in the Catskills in late August, I fell and broke my right wrist. Driving home that night wasn’t fun: I had to reach across and select fifth gear left-handed.

I’ve got a few more weeks with this miserable cast. Anything steep that requires three-point contact isn’t happening: I can’t put pressure on my wrist. So when I returned to Lake Minnewaska, I was looking for something I hadn’t been on before. 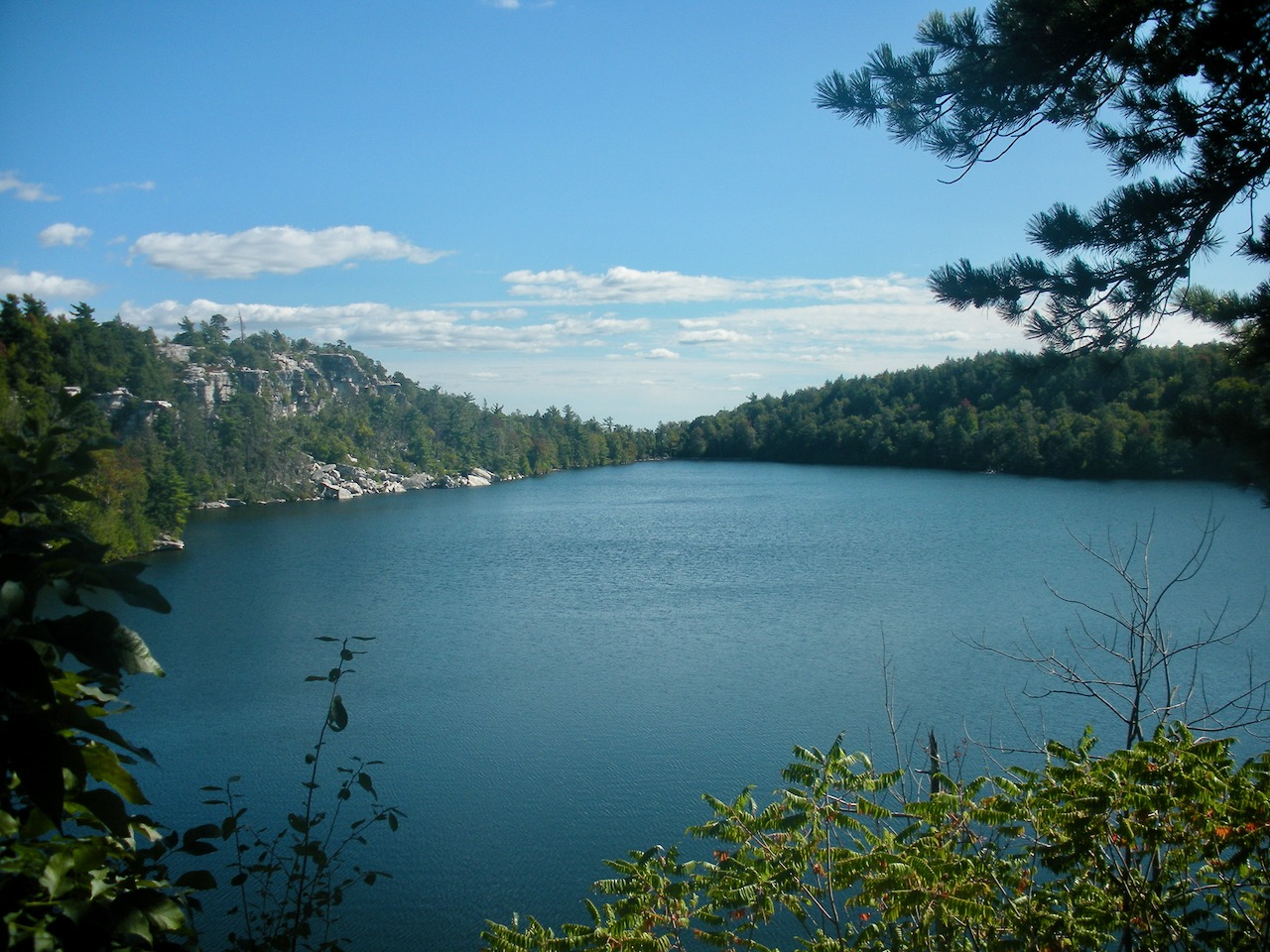 Even though I arrived late to Lake Minnewaska State Park, I didn’t have to wait long to get in. Gertrude’s Nose beckoned, and off I went. The bluebird weather, with a soupçon of autumn chill in the air, drew crowds from New York City and beyond. As I ran clockwise around the eponymous lake, I heard multiple languages. Many people seemed content to bask in the sun on the ledges overlooking the lake.

At the far end of the lake, I set off on the Millbrook Ridge Trail. This is bit of singletrack I’d never been on. The trail dropped, sometimes steeply. There were places I could run, and sections where I picked my way through a rock garden. Any thought of leaving crowds at the lake was fantasy: I donned my mask out of respect for approaching hikers. 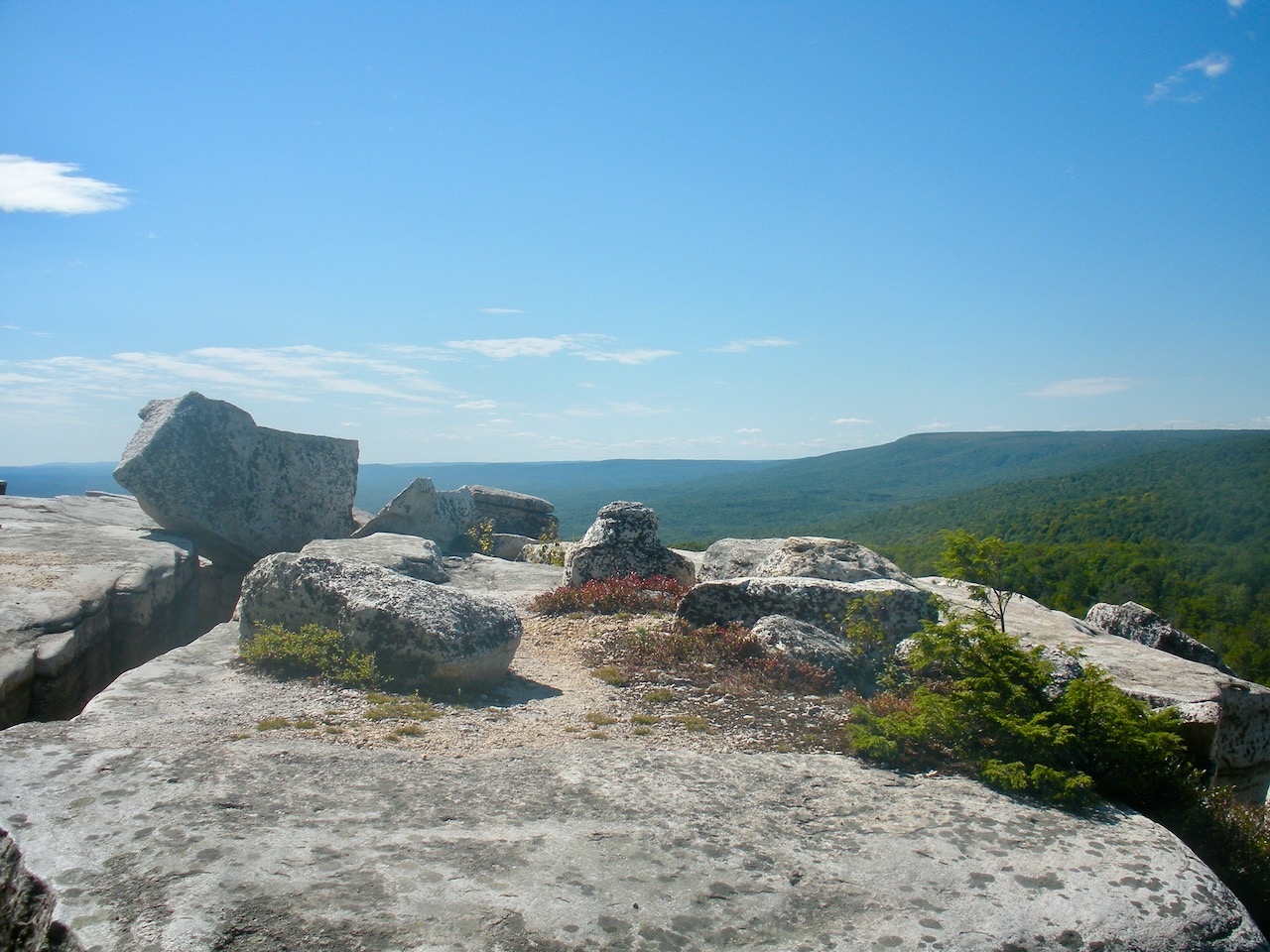 Crossing a dry stream bed, the trail ramped uphill. Gradually, the forest changed from the usual northern deciduous forest to the pine plains of the Shawangunk uplands. After three-quarters of a mile, the trail intersected with the end of the Millbrook Mountain carriage road. I ran another 20 vertical feet to the summit of Millbrook.

One day, back when this property was still privately owned, I skied to the end of the carriage road with friends. We dropped our skis and clambered to the summit for this same view. Howling wind, clouds scudding across the sky. Today, the Hudson River was obscured, and you could see the hills on the other side of the river. Some New York City skyscrapers peered at me from far away. I grokked the view and took photos. Time to move on. 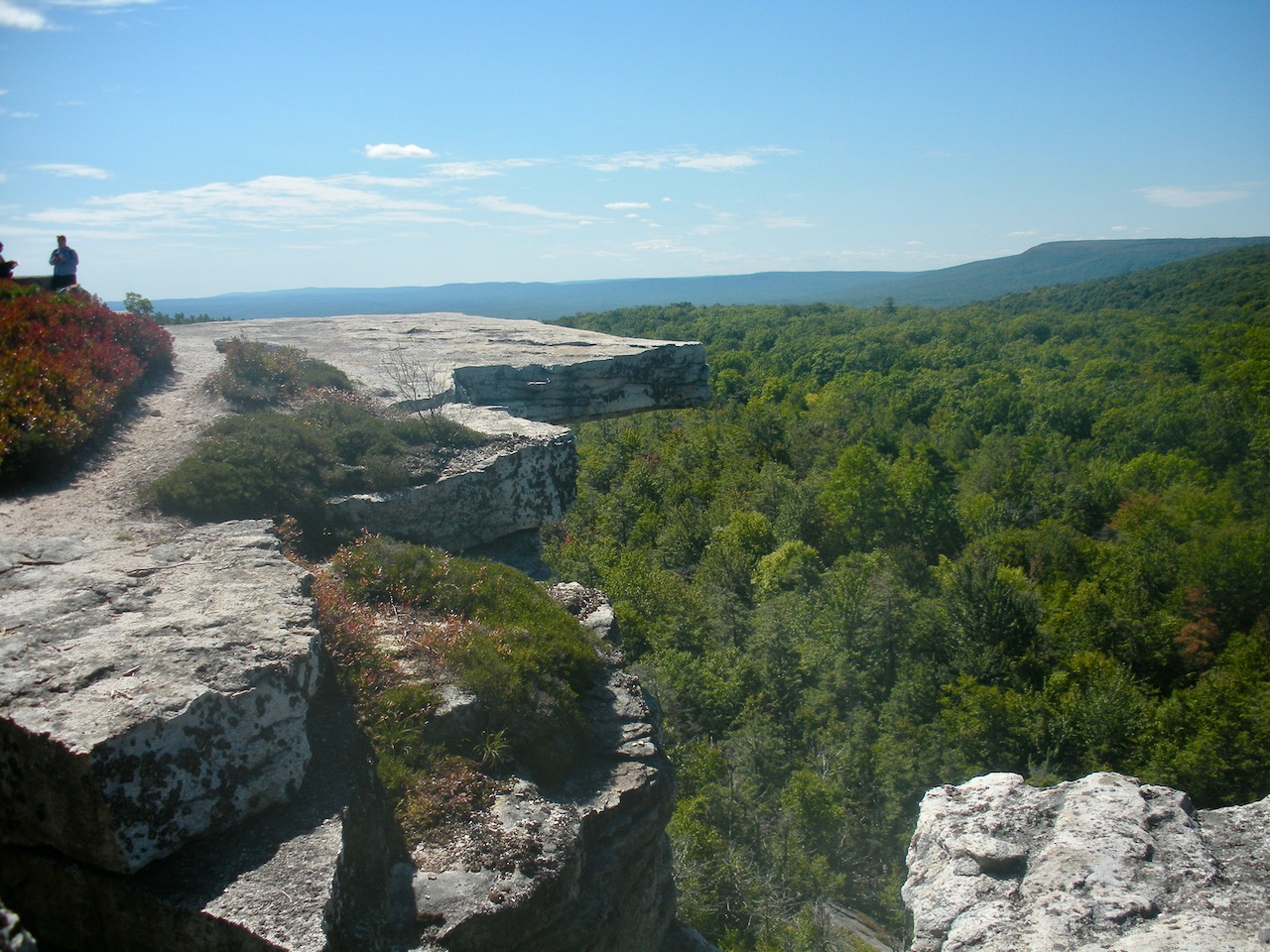 From the summit, the Millbrook Ridge Trail parallels the carriage road for several hundred yards, close to the escarpment. Then the carriage road veers away, and you’re relatively isolated. As you run or hike in classic high altitude ‘Gunks country, you’ve got continuous, mind-blowing views to the south and east. After a while, the trail dropped back into forest dominated by hemlock and mountain laurel.

Finally I emerged on to Gertrude’s Nose, an expansive, quartz-dominated rocky outcropping. Now I understood why I’d seen so many people on the trail: there was 270 degrees of stupendous views. Here and there, hikers lazed on the rock. One woman sat reading. In the distance was Sam’s Point. To the west, Castle Point and Hamilton Point beckoned. I continued. 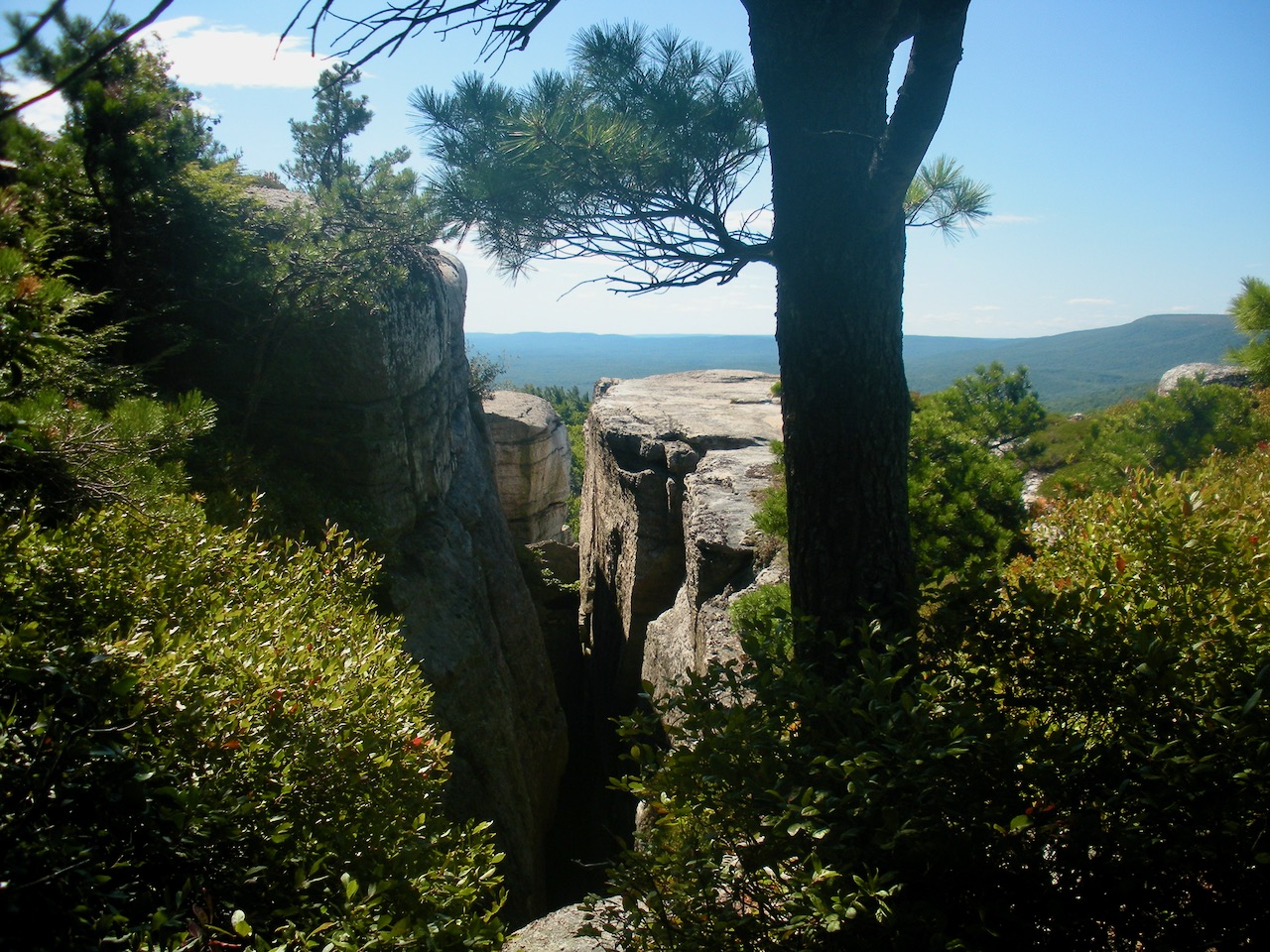 Glaciers that were here millennia ago left wild rock formations all over the Shawangunks, and the section from the Nose back to the carriage road might be the most spectacular. Red trail markers kept me going in the right direction. Leaving the point of the Nose, I had views into Palmaghatt Ravine. Trailless and protected by the sheer drops of the escarpments, the ravine is home to old growth forest and, according to a local friend, unique plants not found anywhere else.

The trail descended off rock, through a wetland, and gradually climbed back before rejoining the Millbrook Mountain Carriage Road. At this point, lengthening the day would have meant running another six or seven miles on carriage road, which I didn’t fancy. Having satisfied my goal of being on singletrack I’d never been on, I set course for the parking lot. A well earned lunch, then the trip home.