For years we’ve known that the High Peaks Chair — serving Gore Mountain’s Dark Side — would have to be replaced. Installed in the late 60s, the chair was over 50 years old. 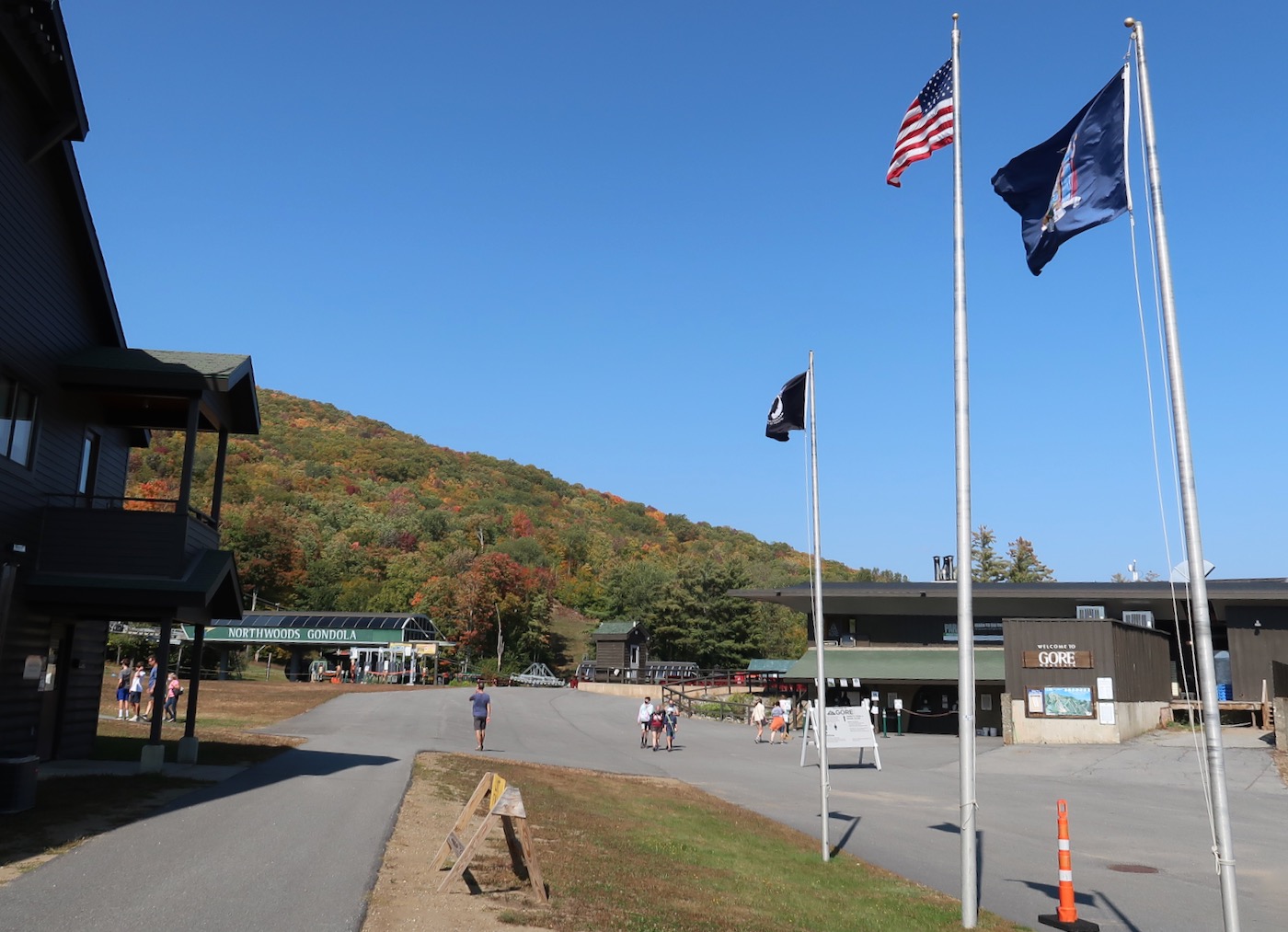 We also knew the new chair was going to be more than a double. Doubles are harder to come by, and people generally like larger chairs. This year Gore is replacing both Lift 6 and Lift 3 at the same time. Lift 3, the Sunway Chair, used the same basic hardware as the Lift 6, the High Peaks Chair, and it’s a few years older.

I was at our place in the Adirondacks for a work weekend and leaves were at peak. It seemed like a good time to ride the quad to the Bear Mountain saddle and then hike to the top of Gore for a look around.

I spent last Saturday morning dropping trees and dragging brush on our land. I reserved the afternoon for my first-ever off-season lift ride. There was a decent crowd when I arrived at Gore, maybe half the upper lot was full. With my newly recharged Gore RFID pass, I walked on to the Adirondack Express. 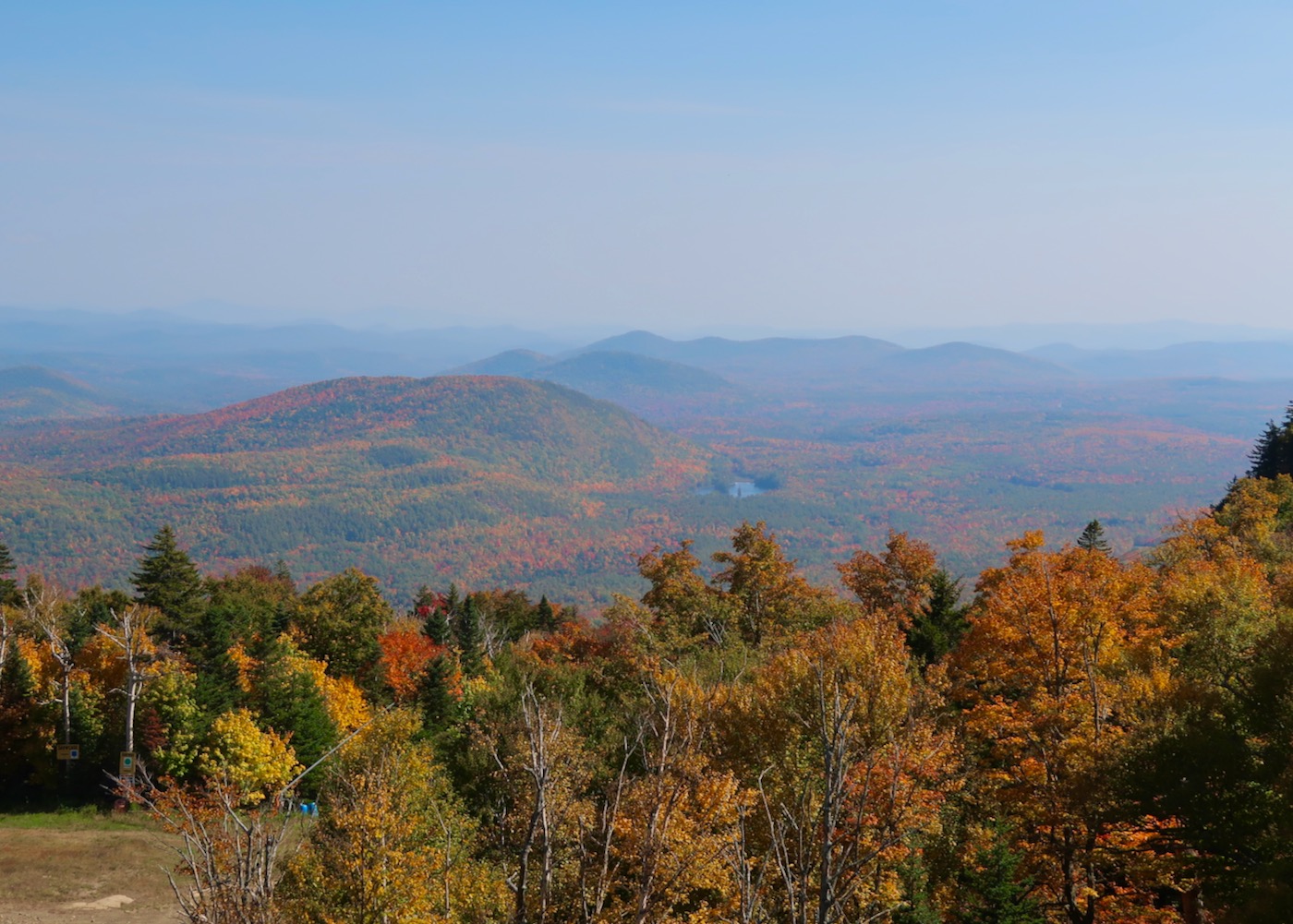 It was a spectacular day. I admit it felt a little odd to head up the east side slowly, on that beautiful high speed quad. There’s an actual mechanical reason why they run the lift more slowly in the off season; I think it has to do with the load created by downloading. Whatever, I took my own advice to chill out and enjoy the ride. All around me, the maples were absolutely on fire.

From the Saddle I set off on Cloud, Gore’s most famous traverse. My plan was to walk to the summit, but I came across something I couldn’t resist; Gore has added access to the liftline from the Hullabaloo side.

The Dark Side lift line is definitely wider, with fewer towers. It looked to me like there is only one tower on the pitch most often skied, between Cloud and Wood Lot. 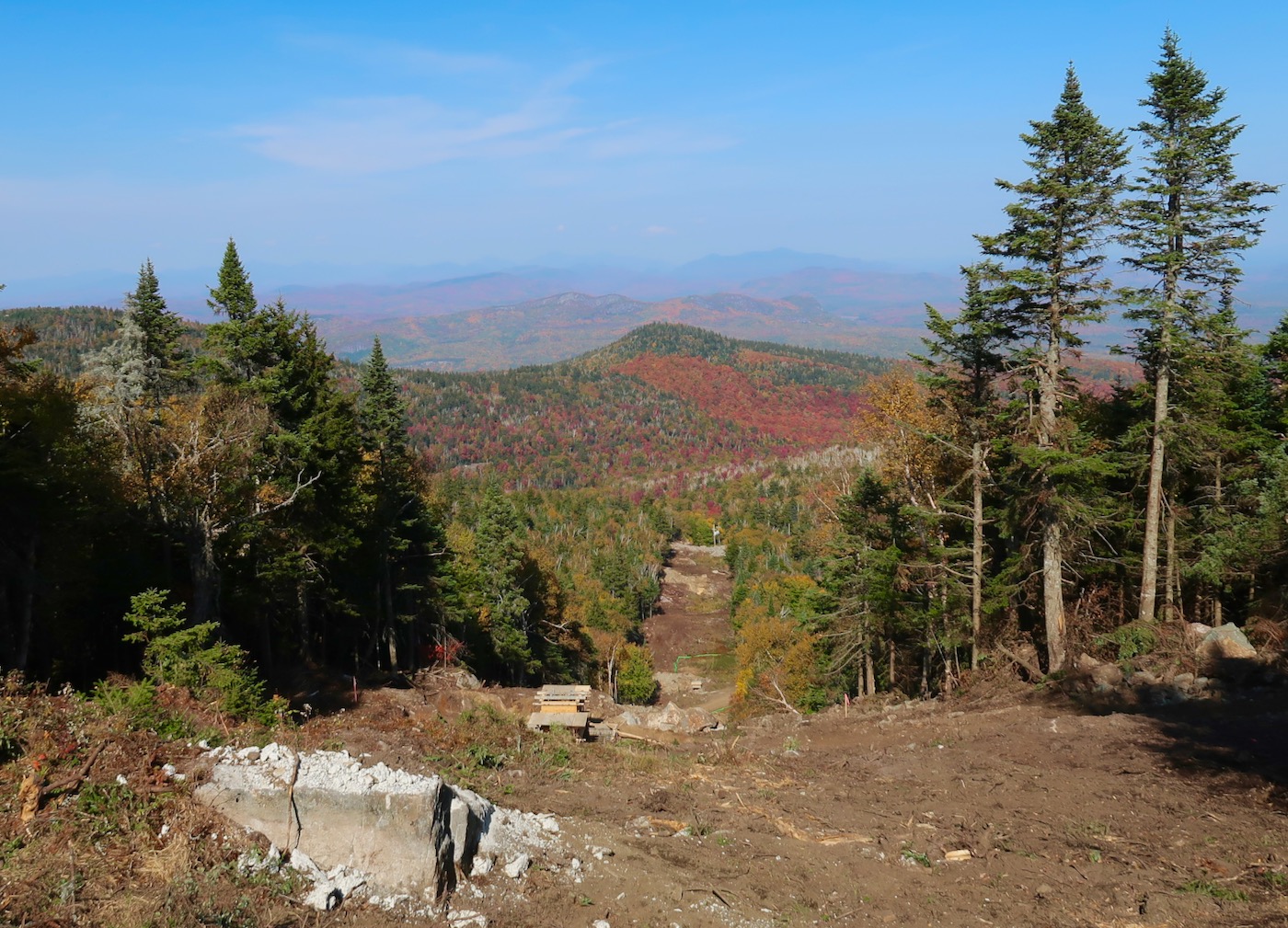 Beyond that, the nature of the line has been changed dramatically. While some of those big iconic and huckable boulders remain, they are separated by a new “roadway” that was built to install the new lift tower. Somehow they built the original lift without a road. That was then, and this is now.

Now the lift line reminds me a bit of High Pines, the run underneath the Topridge chair. On High Pines, each time you are faced with potential air, there’s a way around it. My guess is that the change will make it easier for newbies, and less interesting for experts.

When I saw it, the road itself had some soil on it, which will help with ski-ability, but the edges of the road are lined boulder remnants that will require a lot of snow to cover. 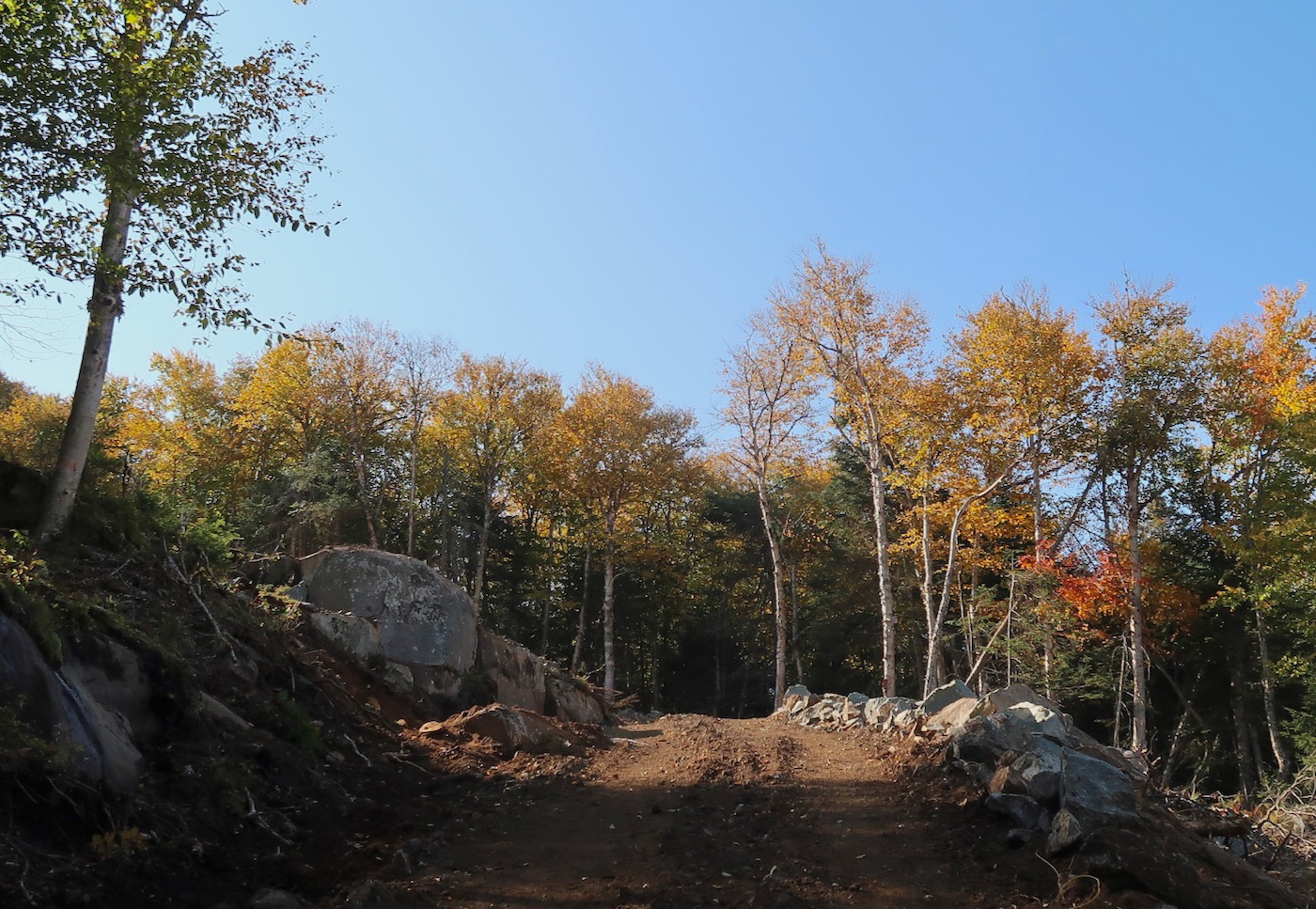 On the section below Cloud, the forms look ready for cement. Beyond that, there’s more work to be done, and there is no seed or hay down yet. I’m hopeful that some effort will be invested to improve the ski-ability of the run, even if it doesn’t happen until next year.

One of the best things about that old run was that the natural rock on the line was extremely smooth, and it was skiable on 40 inches of snow. That may still be true, but it’s likely that line options will be reduced by the sharp rock.

The other obvious difference is the headwall. I never thought the Dark Side had a headwall, but there it is. It’s a lot wider to accommodate the access road. The old line presented a nice continuous challenge directly down the fall line. Seeing it now, the headwall seems much more obvious, near the end of the section that dumps into the Wood Lot. 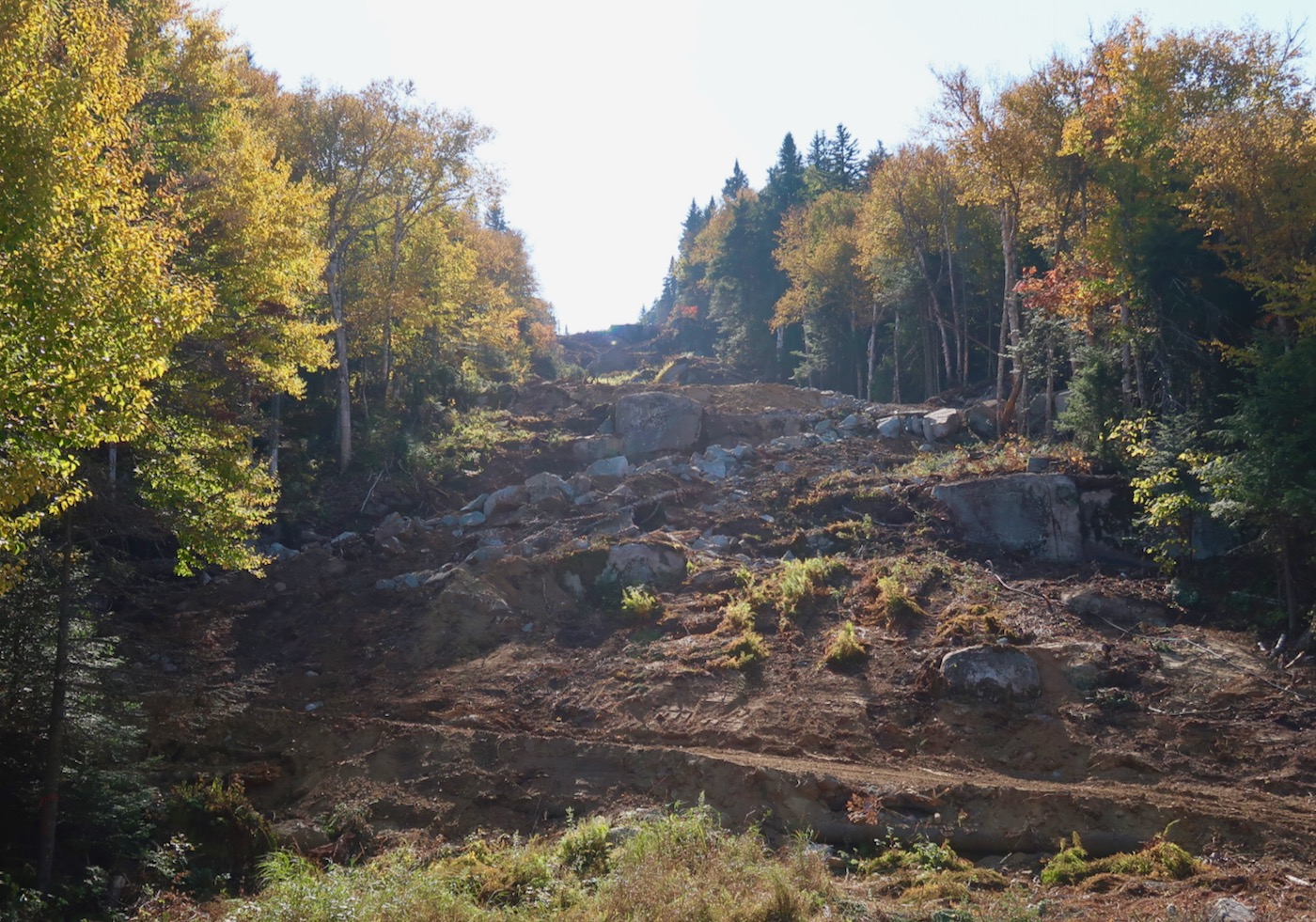 Below that one tower that sits in the midst of the pitch, there’s an impressive dropoff that may give newbies pause.  Still, I’m betting there will be an intermediate way down.  Without more grading, the trees may well offer the lines of choice.

I was so focused on the zone below Cloud that I never saw the new section above Lies. Looking back on it that was a mistake. But it was getting late and the last chair was at 4pm. It was a beautiful day and riding down hill is very much fun with distant mountain views spreading out right in front of you.

In the end, I think I understand why the mountain replaced the lift and why they cut the line the way they did. One thing is certain, Gore got real value from those two old lifts. It was amazing they lasted as long as they did. 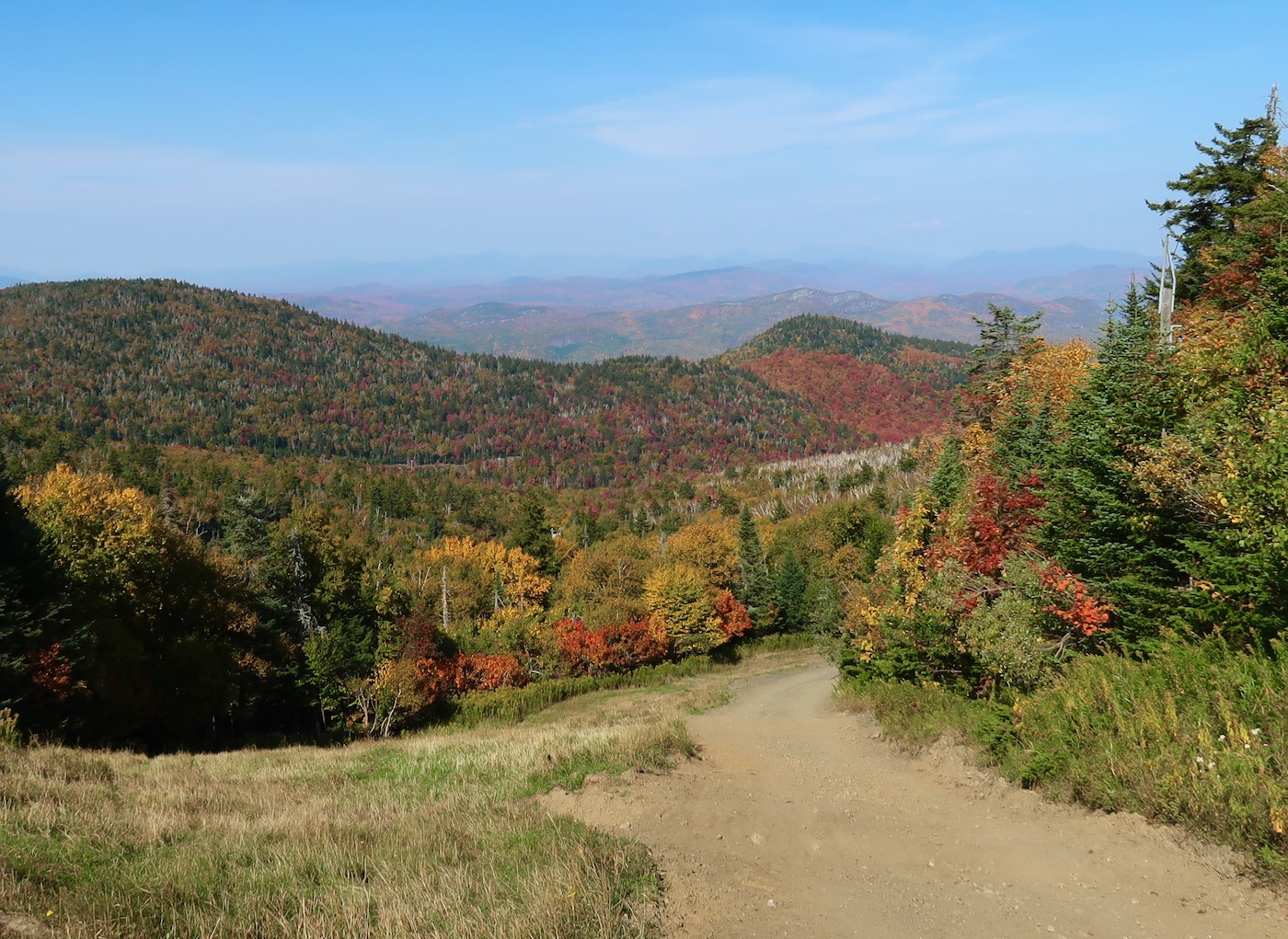 That terrain will remain extremely fun to ski. It’s steep, north-facing, high elevation, what’s not to like?

But, the Dark Side I knew, is gone. That liftline was unique in the east.

For some of us, that old double represented more than the great terrain it served. It was a direct connection to Gore’s storied past. That connection’s not gone, but it’s a little more faint. You have to squint a little harder to make it out.

If they’d hang Betty’s sign back up, it would make me feel better.

22 comments on “The Dark Side on a Sunny Day”