Mountains hold secrets that can only be discovered through close exploration. That’s especially true for mountains as large as the Gore Massif, with its multiple peaks and valleys. After all, this is the place that Verplanck Colvin called “a very remarkable mountain.” It took him two attempts to reach the summit with his crew to survey the area. 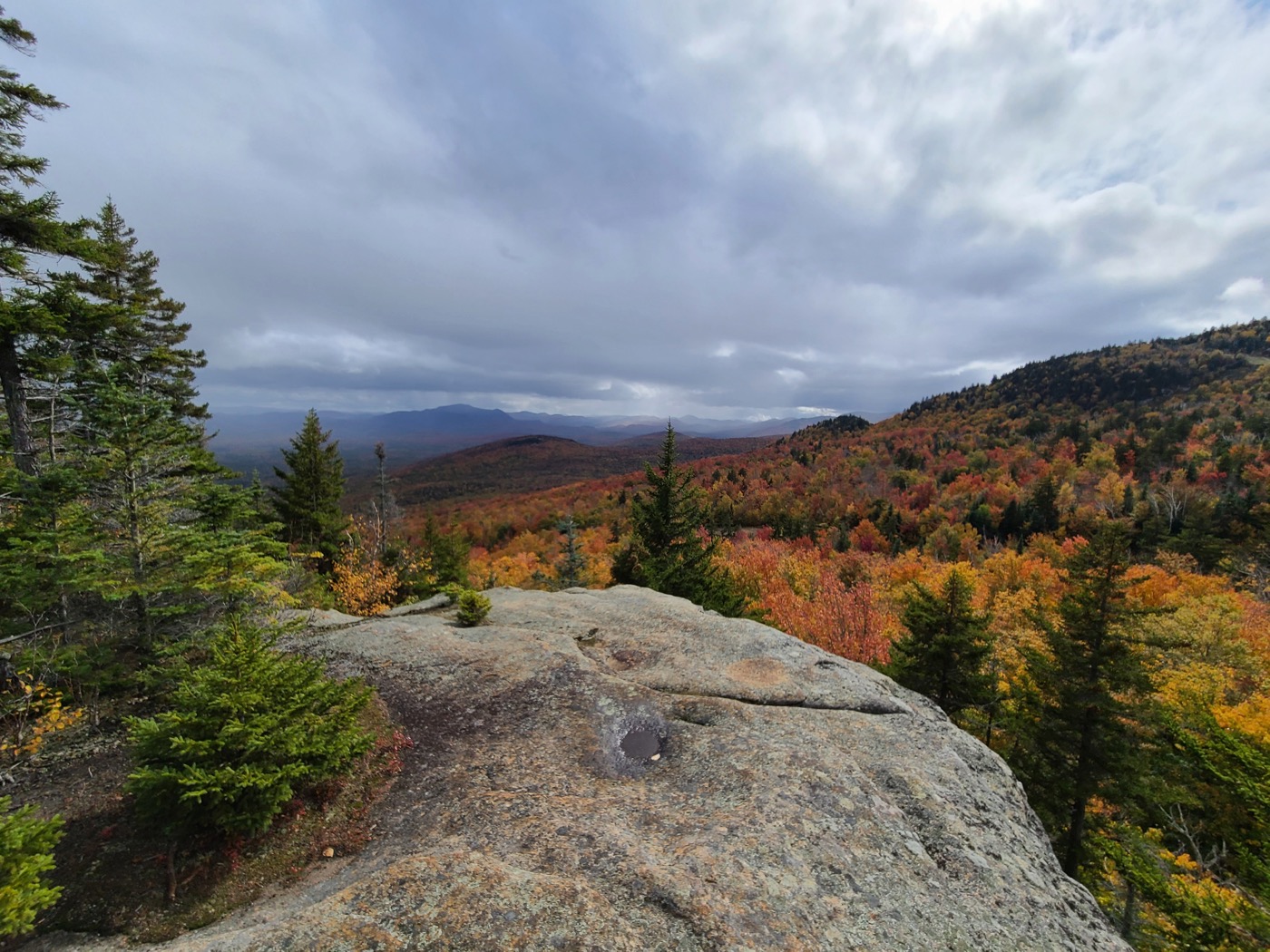 The new normal seems to have exponentially increased the numbers of those hiking to the mountain summit and using the mountain’s hike and bike trails. Most visitors to the mountain in winter use the ski trails to zip down the corduroy slopes, hardly noticing the beauty of the frozen landscape along the way.

A small percentage of those skiers and riders will explore the glades that Gore has developed, but again, the game is to avoid the trees, rocks, and cliffs to get down the mountain in one piece, and not truly explore. Admittedly I have done the same while backcountry skiing some of the historic ski trails on the mountain. 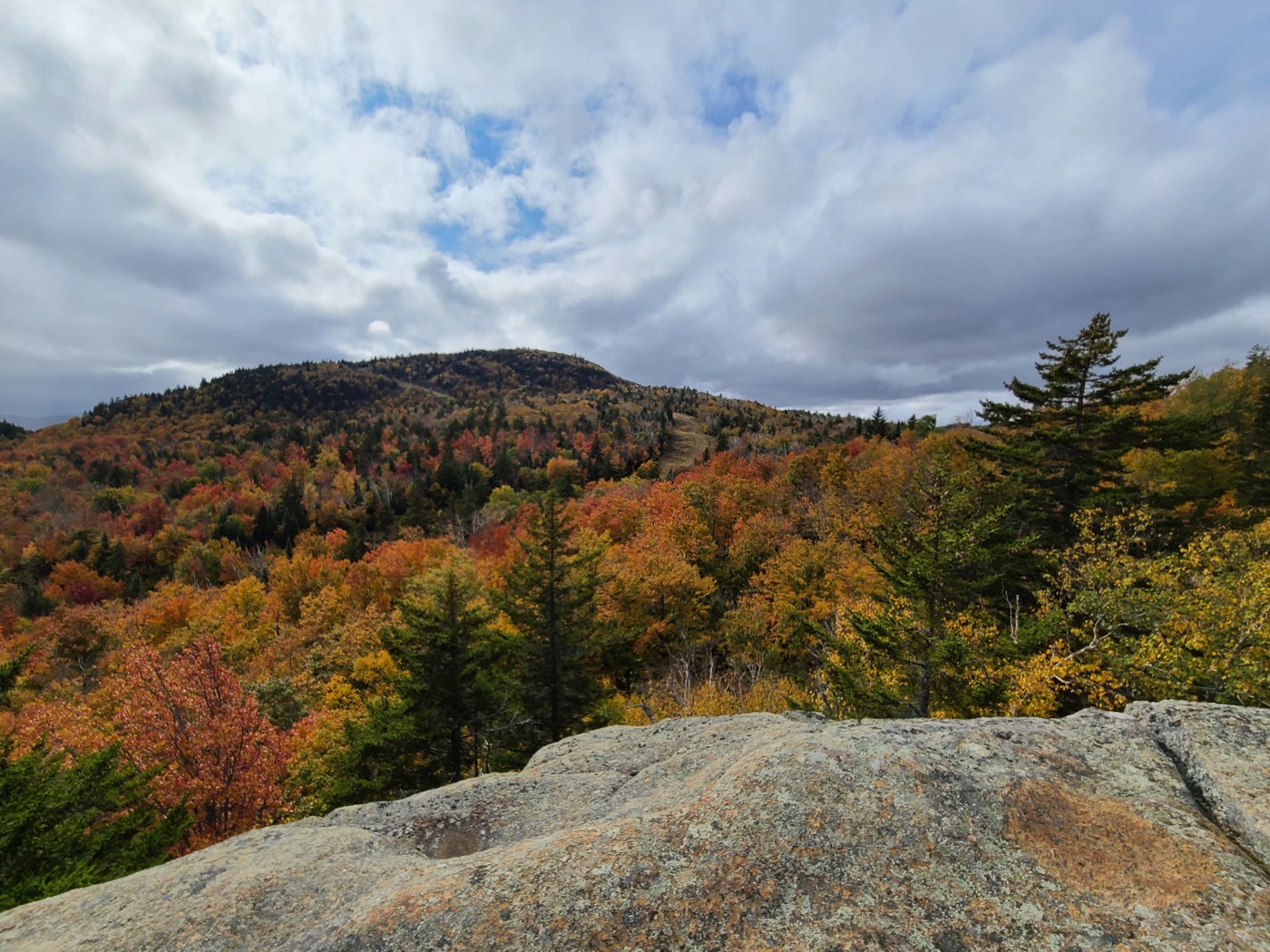 There’s plenty to admire deep in the woods, but who can resist quickly blasting through uncut powder on the Raymond Brook Trail? Hikers approaching the mountain from Ski Bowl Park often hurry along on the 5.5 mile trip to the top. I’m guessing they walk right through the old garnet pit mine, or are in too much of a hurry to admire the multitude of waterfalls in Roaring Brook.

On a recent Saturday I took the gondola up to complete a trip I’d been thinking about since early summer. I dropped down Fairview, and then took the Twister Cliffs/Trillium Trek, parts of which are the original Schaefer Trail, to get back to the base. It’s a three-mile trip down through a beautiful landscape seen by few. Some of the drops are quite steep which must make for quite a bike ride. 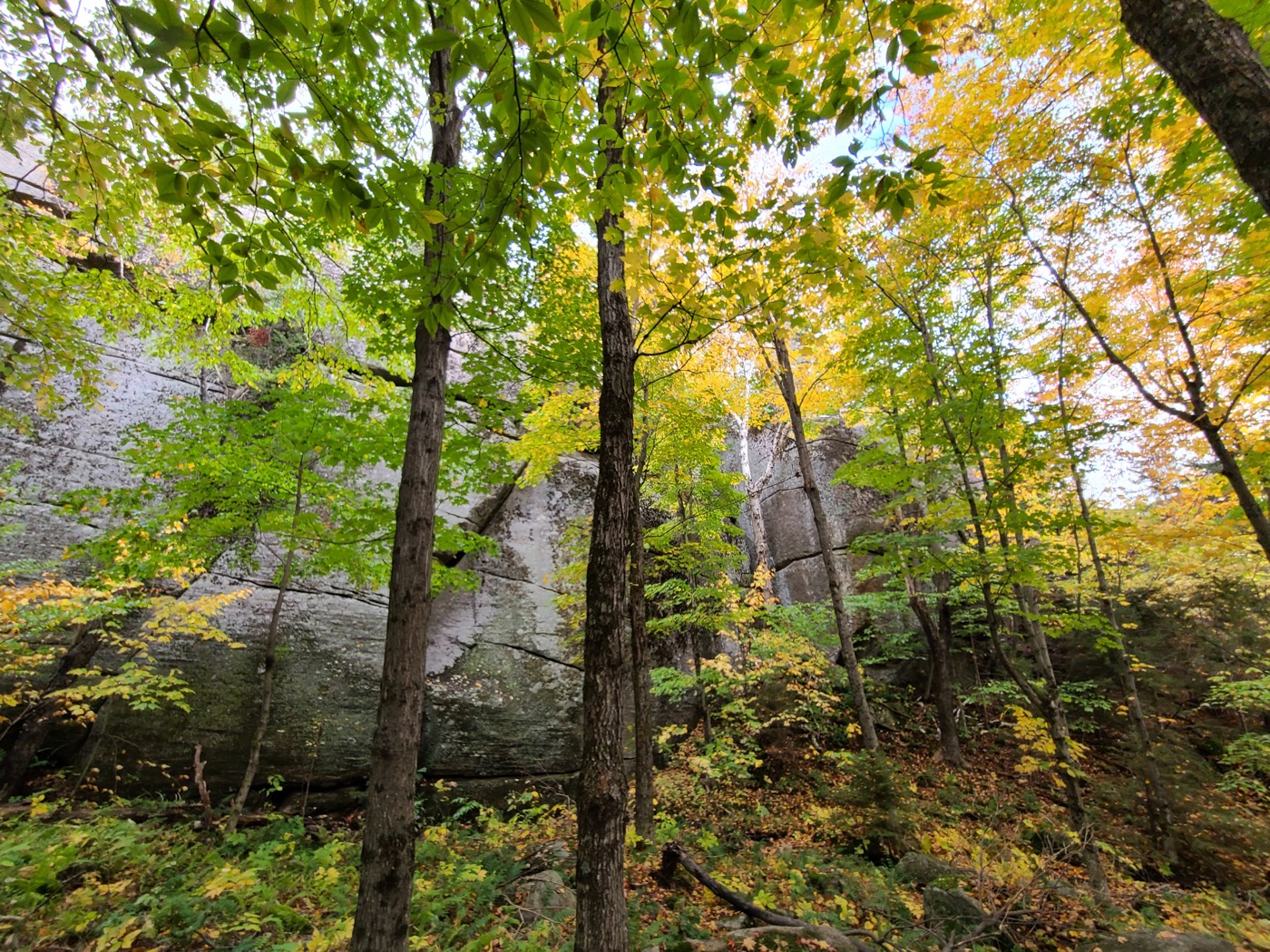 For those not familiar with the territory, the Schaefer Trail, laid out in the ‘80s by Don Greene, originally started at the Ski Bowl, where the Village Chair now sits. The trail is named after my family. Carl Schaefer, my father built the first rope tow in New York at the Ski Bowl in 1935. His brothers Paul Schaefer, the noted conservationist, and Vincent Schaefer, a chemist and meteorologist were influential in starting skiing and the Snow Trains to North Creek. Vincent was the first to seed clouds to make snow. The trail is now routed close to Roaring Brook which makes for a scenic hike any time of year.

As I dropped down past the Saddle Lodge, it was pleasure to veer off the grass and on to a real trail in the woods. The massive cliffs, ledges, and rock formations from the original Schaefer Trail were quite the sight to see again after many years. Twister Cliffs winds through the woods, going mostly down, although it has its ups to challenge you. 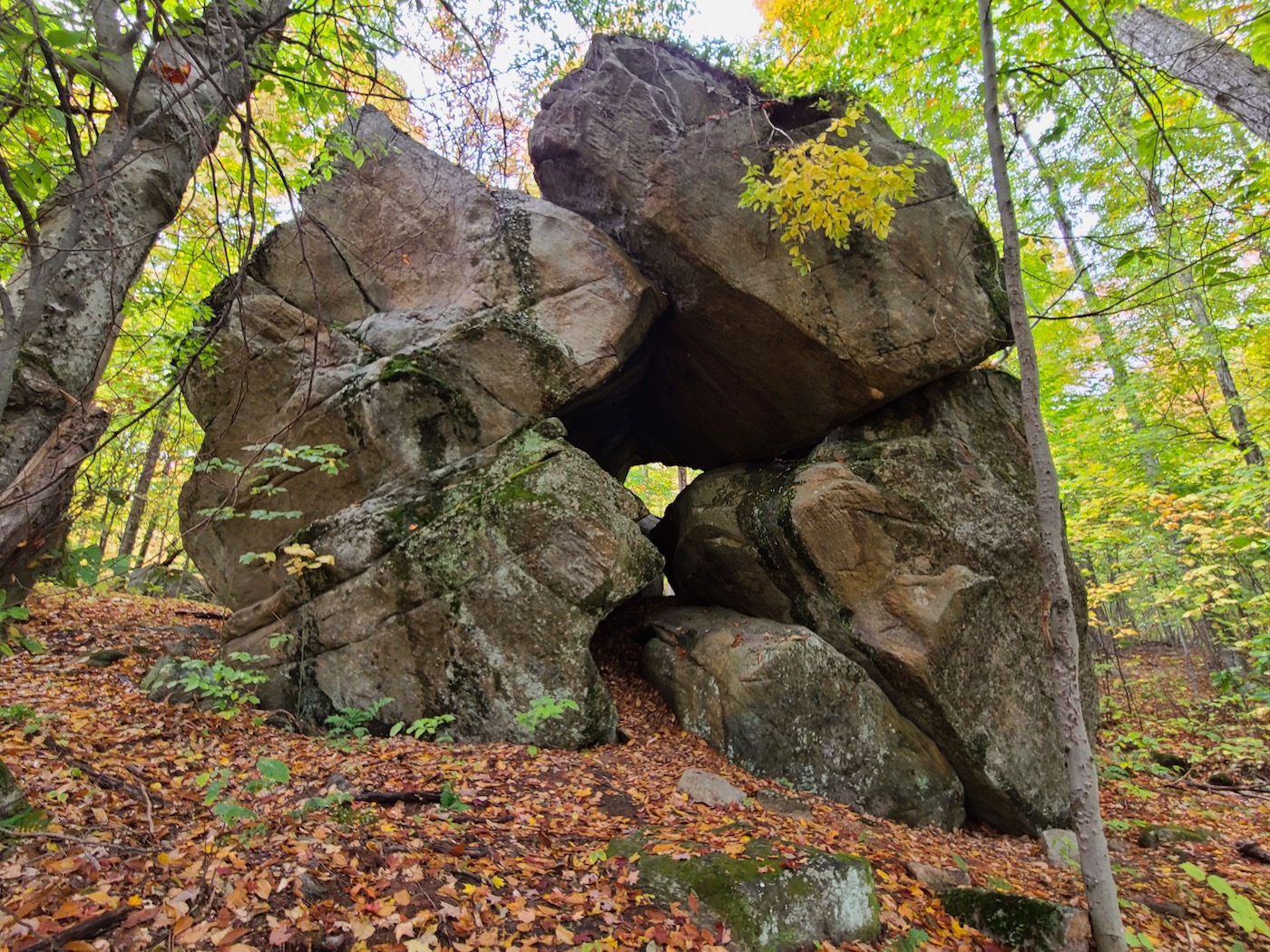 You cross the access trail up to Burnt Ridge, and then the excitement hits. The trail traces the base of a huge ledge, follows up a rise, and then a sign appears — CLIFFS AHEAD. You are now on Paul’s Ledge with phenomenal views of Crane Mountain, a panorama of Vermont peaks, and views back to the top of gondola. Unfortunately now gone is the burned up lean-to that sat just above the ledges, but memories linger.

Dropping off the ledges you cross Echo and return to the woods. In winter this is called the Cirque Glade. You are surrounded by huge geologic features including Dave’s Cirque and more jaw dropping ledges. There are several challenging steeps where MTB’ers will get their thrills. 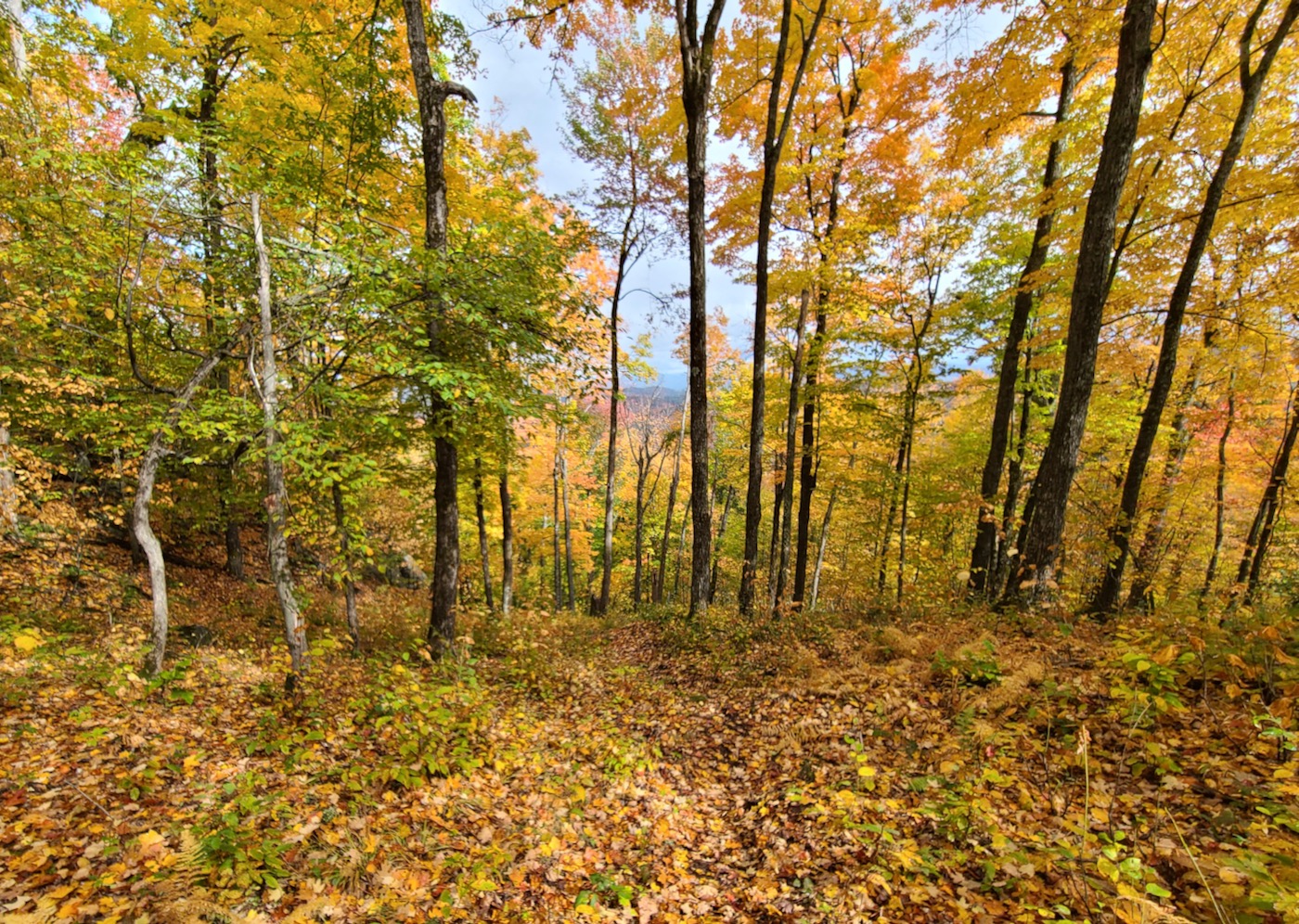 There are a lot of them on the mountain, and when you see the steeps, you know why bikers wear the hefty protective gear. Not to be missed on the trip down is Lean-to Rock which is a phenomenal glacial rock pile. Did these rocks crack after being dropped 10,000 years ago? Questions to be answered another day.