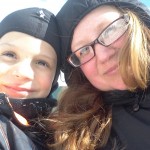 I don’t love to ski. I don’t see the first snowflake as something out of a magical Disney movie. I dislike being cold, and would rather be wrap in a blanket with a mug of cocoa, next to a roaring fire. Skiing isn’t my passion, but I do it. I trudge through snow in clunky boots that weigh me down.

I had my first lesson a few years ago. I remember thinking, “Who does this? Who in their right mind would strap wood to their feet, look down a mountain, and think, yeah, this seems like a smart idea?”

I was placed with a group of college students who had been skiing since they were three. At 28, I felt old. Everyone in the group, but me, could skate and turn and do everything asked of them. I felt defeated and wanted to give up.

As a child I was athletic and adventurous, the kid who would ride her bike off a roof without reluctance. Now I’m a mother to three children who do the same, and it scares me.

But, this was not something I was doing for myself. John, my significant other, had been skiing for more years than I had been alive when he turned 50. He was tired of skiing by himself, and for a birthday gift, I gave him lessons, for me. I did it so I could ski with him that season, and for the rest of our lives together. Love makes you do stupid things.

Until that point, I was a spectator; the cheerleader mom pointing and saying, “That’s my kid.” Because at that point, except for me, the entire family skied.

Two days later, still questioning the sanity of the sport, I strapped those planks onto my feet and continued my journey into the unknown. I was directed to the magic carpet.

Standing was difficult enough, and now I had to master downward motion. I did a yard sale more than once. Still I persevered in my lessons, and eventually found myself mastering the bunny hill.

Still skiing for me was about fear. Chairlifts made my heart palpitate. In my first attempt to unload from a lift I ended up in a pile on the ground whacking my head in the process. The mountain was huge and slick and I was small. I remembered I couldn’t do this. Frozen with fear, I tumbled again. So many thoughts spun through my mind as I took a sled ride of shame. I wanted to share skiing with my family but I didn’t want to get hurt. I knew I had to conquer my fear.

But I didn’t conquer, not for a long time. Practice and experience helped me to gain some confidence, but the fear was still there. I stared down that mountain that entire season thinking that I had lost my mind.

Now, from January to March, every Sunday, I wake up at 5:00 AM. I pack five boot bags, five pairs of skis and lunches, and head off to ski.

Chairlifts don’t scare me anymore. I skied my first black diamond with my family. There are many triumphs in skiing, that non-skiers don’t understand. 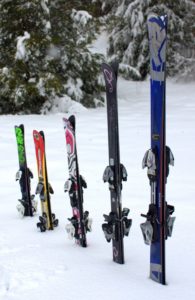 You get rewarded in skiing. For all the cloudy days, you get a bluebird day. When the sky opens up, the sunlight beams down and there is nothing dividing yourself and the world around you. Mother Nature and the human soul finely intertwined.

I’ve learned lessons from my kids. They are resilient. They fall, they get back up, brush themselves off, and try again. I do it too.

In strange, unconventional way I do love skiing. The fresh fallen snow doesn’t call to me, but I have a deeper appreciation for it. There is a camaraderie that you can feel, just knowing that the person skiing next to you has faced the same challenges, whether they’re nine or ninety. In my first season I was challenged to race by a gentleman in his eighties. We both knew he’d beat me and had a laugh about it. In that moment though, we shared our strength and weakness, and our capacity to enjoy the same sport.

Each skier passes the torch to another, and as we learn, we give in to our natural desire to face challenges, and to help others overcome theirs. It has been a long, interesting trail. A journey of self-discovery, human interaction, and family bonding. Next season, I will again click into my skis and ask why I’m skiing. This time though, I’ll have an answer.

6 comments on “Learning to Ski: I Did It for Love”