Killington is the mountain I know best in Vermont. In college, I would spend five days riding there during College Fest and those times have left a lasting impression on me. 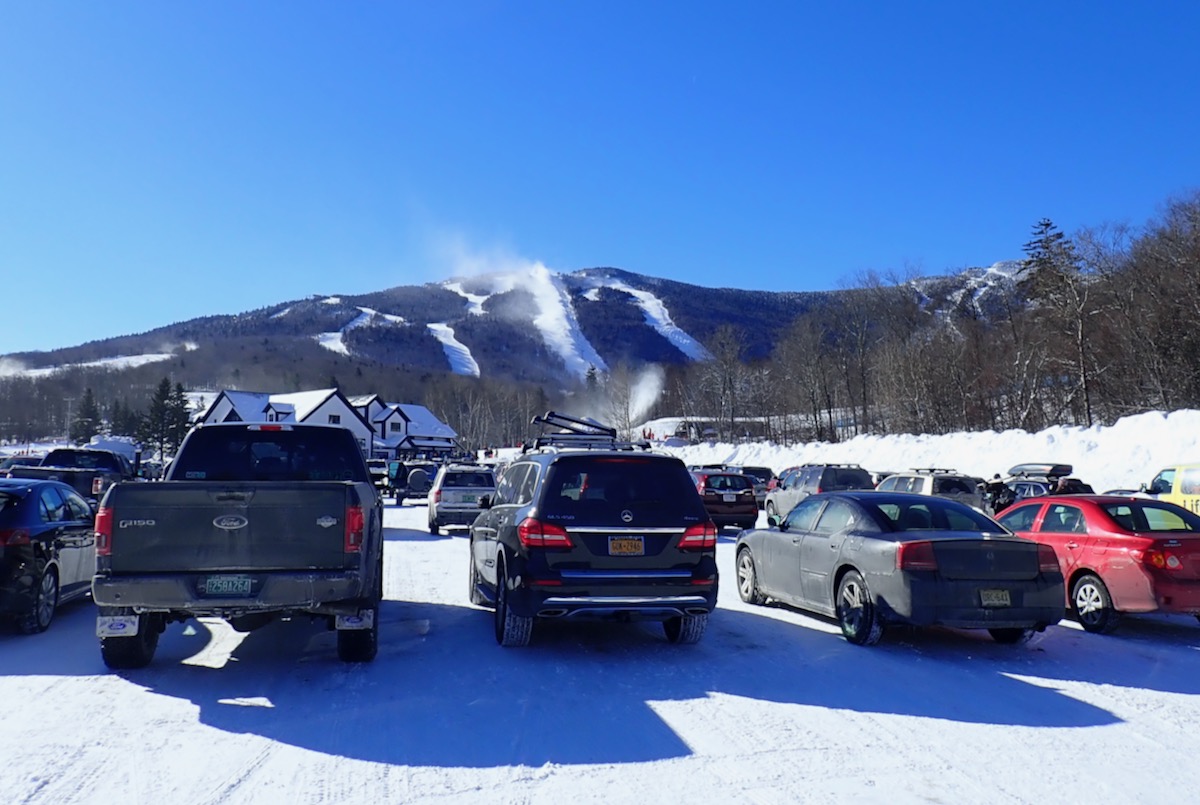 I was excited to get back this year and check out what’s new, especially the Snowdon Six Express and the Woodward Peace Park. Our plan was set: Alex the skier, Alex the snowboarder, Dave, Ally and Henry joined forces to share a place on the Killington access road just four minutes from the base.

I like to head to the Ramshead Lodge 20 minutes before the lifts spin to find a prime parking spot. I take the Ramshead lift up and either take a couple warm-up laps under the chair or just send it over to the K1 or Snowdon Six. 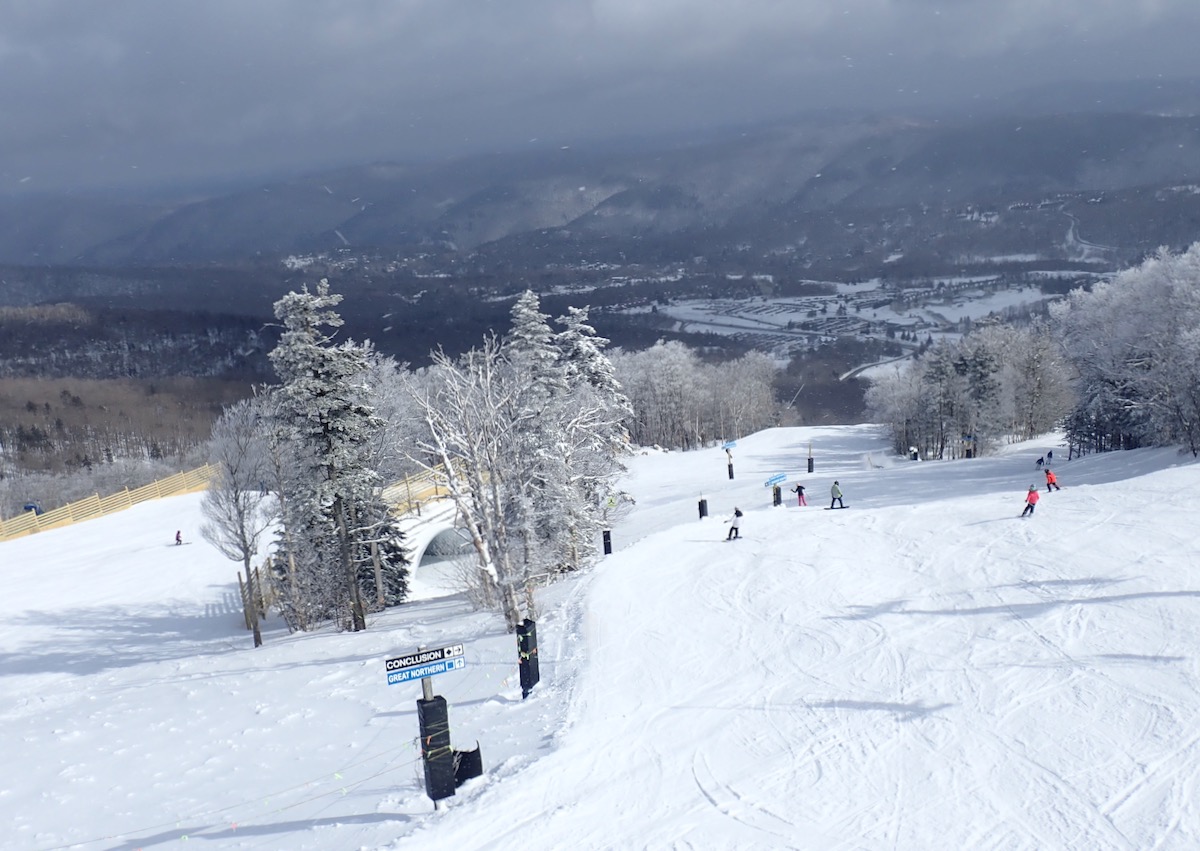 Henry hadn’t been snowboarding in a few years and we decided to let him stretch his legs out. The fresh corduroy on Header was a great warm up. After two laps we cut across Caper to get to the rest of the mountain. As we rounded the turn to Snowdon mountain I noticed the new changes.

Two new crossover tunnels were installed this year to improve the traverse, decreasing congestion and making the mountain safer. Above that tunnel is the new 6-person high-speed bubble lift. No better time than the present, we skied down to the lift and rode it up. 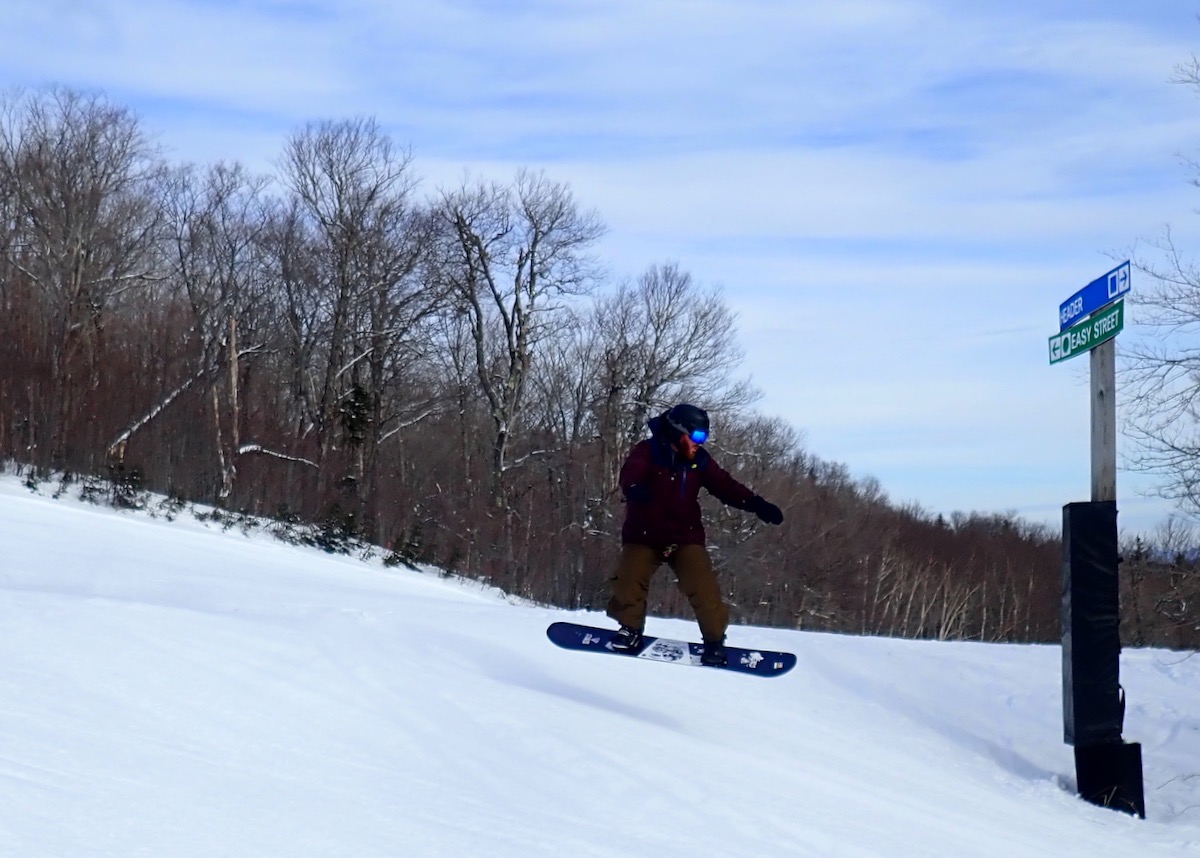 Snowdon serves up some really great cruisers and with the new crossover bridges there’s no need to slow down. The lift was fairly empty all weekend. The morning sun softened up the groomers nicely — especially Bunny Buster — a long wide Blue with some nice steep drops mixed in. Among the group the consensus was that Snowdon was our favorite area.

After a few laps at Snowdon we headed down Mouse Run to the black run of the day Highline. The Sun had worked its magic here as well and it was all smiles and sprays as we ripped down to the K1 gondola. Over to Bear Mountain via Blue Heaven and Jug. Lower Jug was covered in moguls and due to the variety of skill levels in the group we took the aptly named Escape back to the groomers. 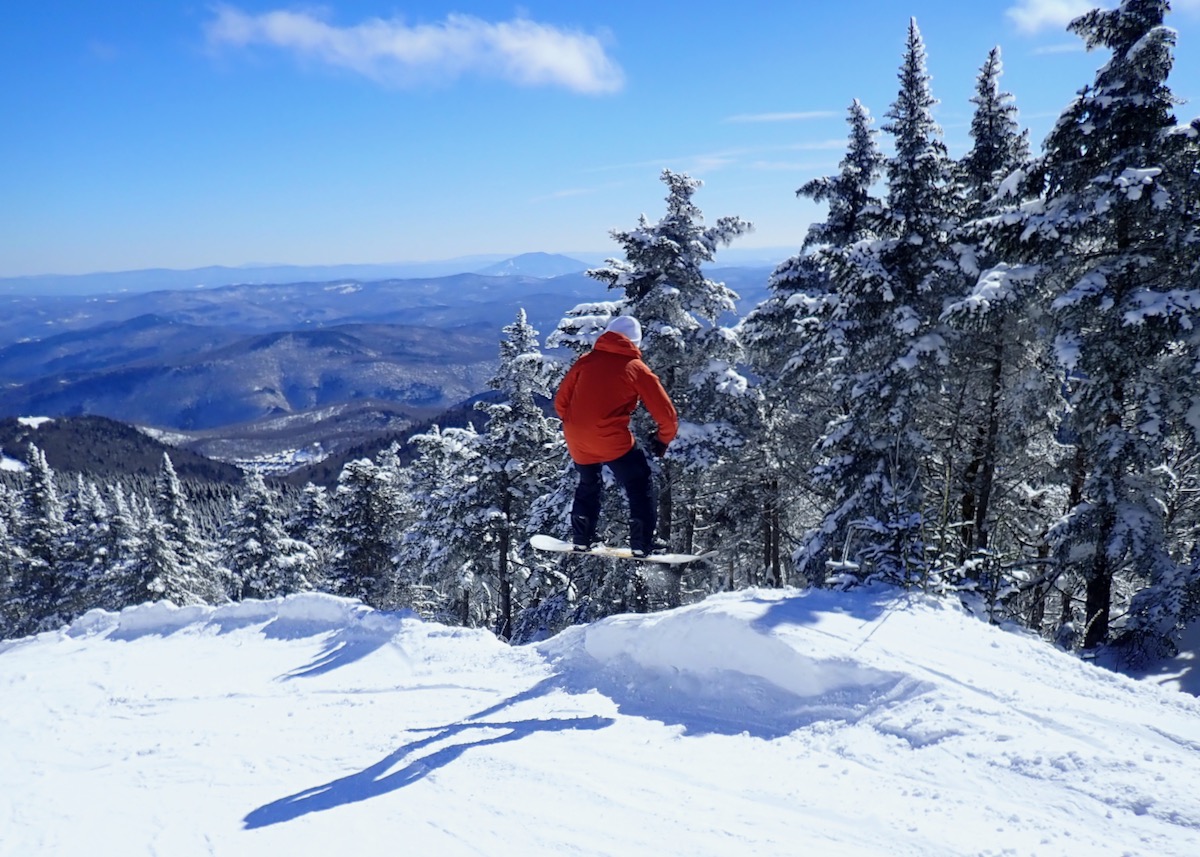 We finally rode down to the Skyeship and took it to the top. “The Stash” at Killington is a gladed terrain park with all natural and wood features. We dodged trees while hitting jumps and jibbing stumps. At the end of the trail was the new Snowshed crossover tunnel which took us to Dreammaker and the WoodWard PeacePark.

The Woodward Park is all about flow, so even if terrain parks aren’t your thing, you might find a few banked turns, hips or rollers that you like. At the bottom of Dreammaker the jumps get big and we were content to pull up and watch some talented locals do their thing. 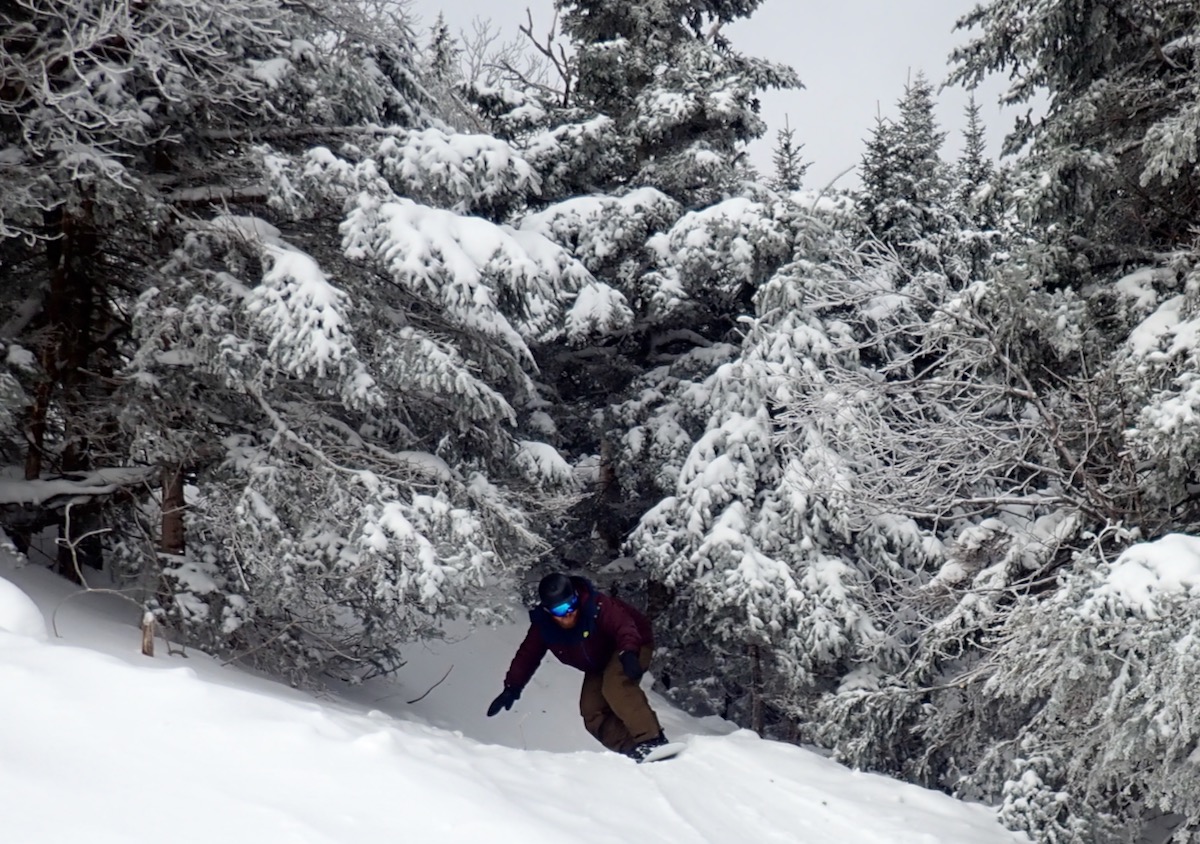 We took the Skyepeak back up and stopped by the remodeled Vista Deck which is now the Brat Haus. This is a super cool place to grab an old world sausage with beer and enjoy the view.

There’s only one way to work that meal off and that’s my favorite run at Killington the long green cruiser Great Northern. You will not doubt the size or vertical of Killington as your legs burn and the Skyeship gondola comes into view at the very bottom of the mountain. The gondola back is a long ride and we were able to catch our breath. 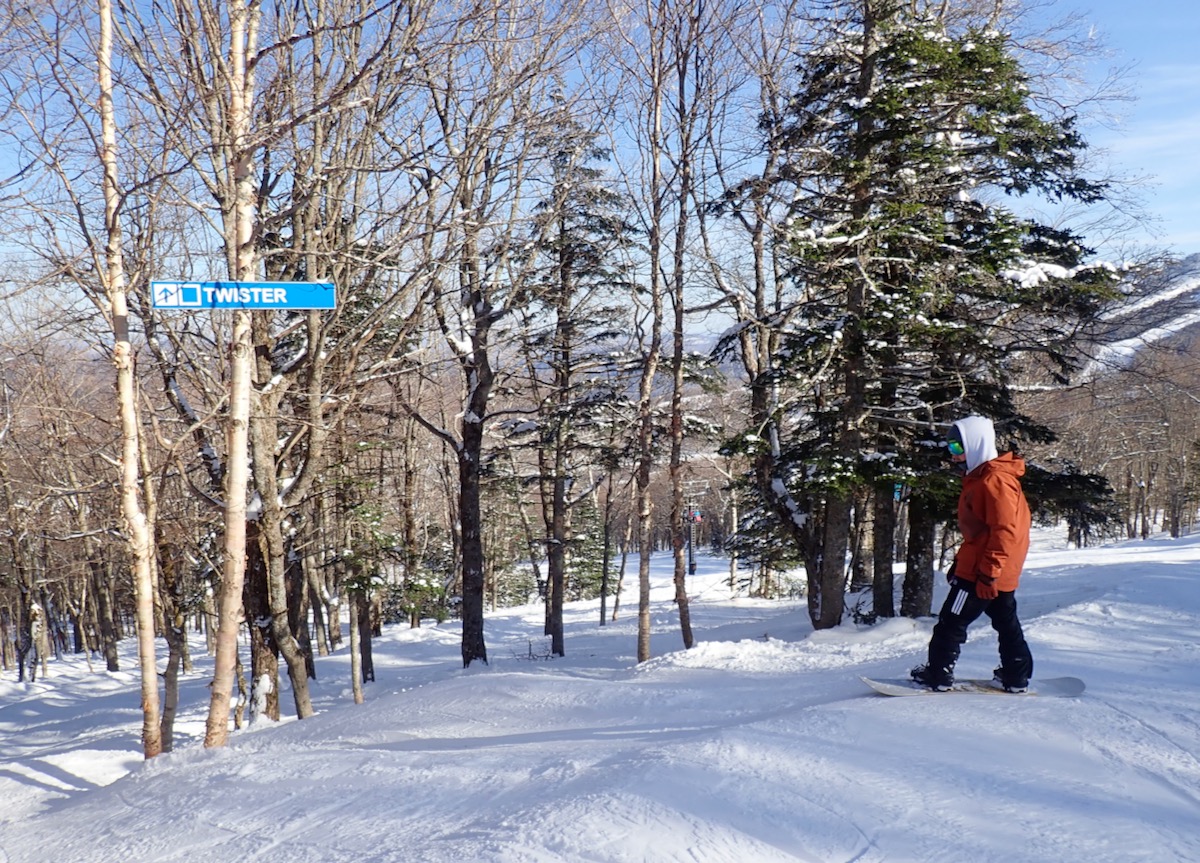 Dave, Alex and I all wanted to find something a little more challenging before ending our day. Dave had cut into the Roundabout Glades at one point and said the conditions were good. We scoped out Low Rider and Patsy, both had great coverage but looked a bit bumpy for snowboards.

We found the jackpot in the Squeeze Play glades to skiers right of the Ramshead lift. These blue glades were relatively untracked and are widely cut. We took multiple laps ripping through the trees, slashing any fresh snow we could find. On Sunday a little snow freshened it up, icing on the cake for a sweet weekend. 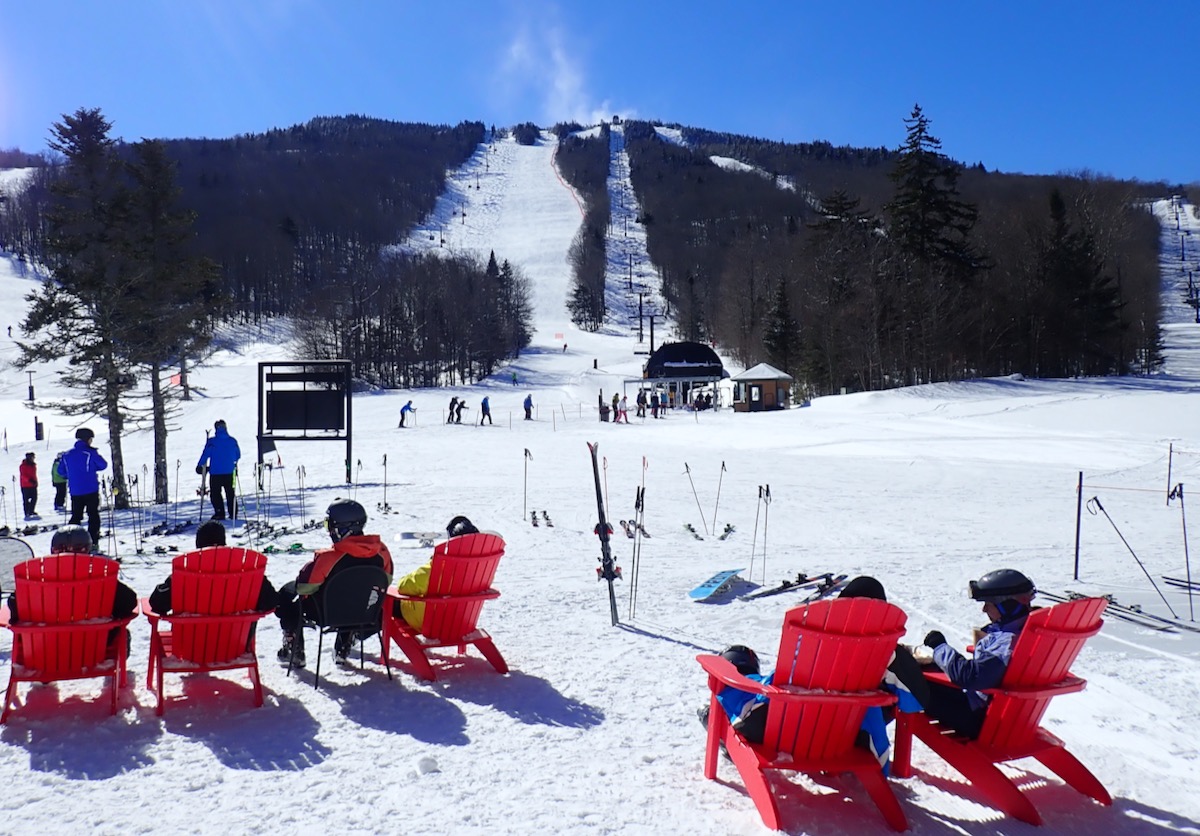 The weather was great all weekend, with Friday being absolutely Bluebird. We managed to avoid most of the crowds and only found a few scraped out spots on the interconnecting trails.

The additions to Snowdon mountain and the new bridges have really elevated the mountain. Killington is big and better than ever. By Monday I was daydreaming of The Beast and the longest season in the east. May seems like a great month for another trip.

3 comments on “Killington: Big and Better”