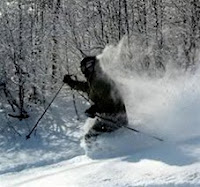 Jamesdeluxe has joined NYSkiBlog as an author. James began alpine skiing in his mid-30s following a move back to the northeast after, go figure, living five years in Colorado and four years in New Mexico. Because James puts a premium on the “vibe” of where he’s making his turns, he’s been known to pass over world-famous resorts in favor of smaller, under-the-radar ski areas. Since 2003, James has written for First Tracks Online, Snowjournal, and Alpine Zone.

James travels to the West or Europe to mix things up, but he’s an unapologetic champion of East Coast skiing and a perfect fit for NYSkiBlog. His avatar, above, was taken on Upper Parkway at Whiteface in mid-December 2009 after a 20-inch dump.