“Is this the way to Hunter Mountain?”

Here we f’n go, I thought. We were on the Spruceton Trail, a jeep road leading to Hunter’s summit and fire tower from the west. One of the biggest trails in the Catskills, it’s a veritable highway. How could you not know where you were. 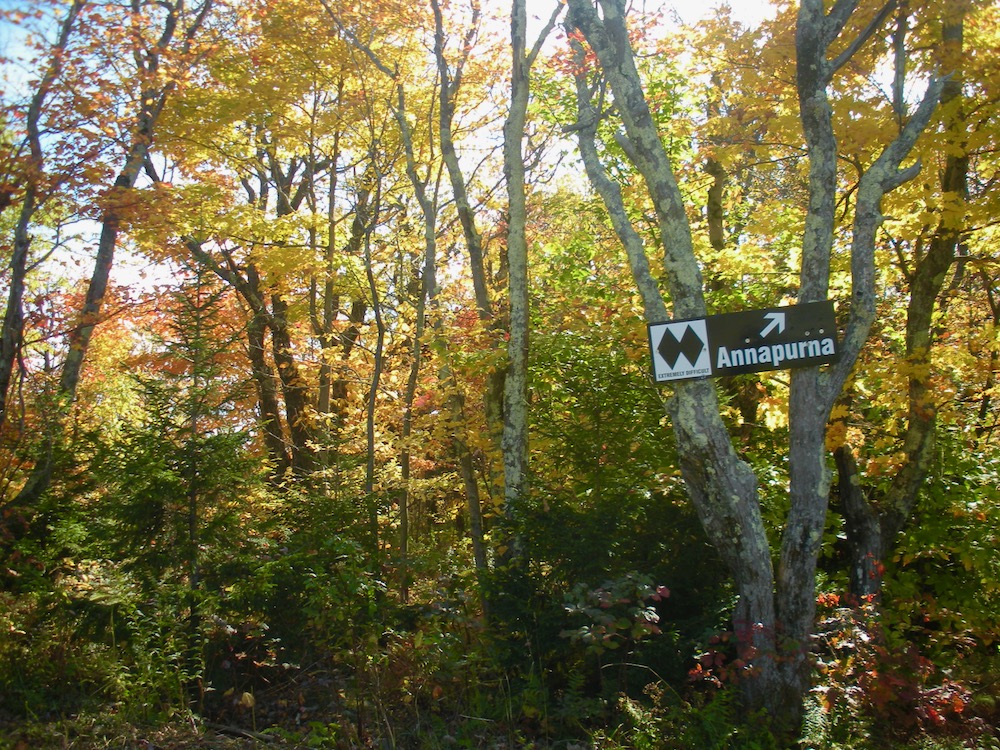 He pulled a crumpled piece of paper out of his pocket and unfolded it. Definitely not a NY-NJ Trail Conference map. But it was something.

In July, I got spanked at the Whiteface Sky Race, and I wanted to prepare for next year. I looked for a hike that would approximate the up-and-down-the-mountain-twice of the sky race. Becker Hollow was the shortest, steepest route to Hunter’s summit. From there, I’d descend to the ski area base lodge, and return the way I came. 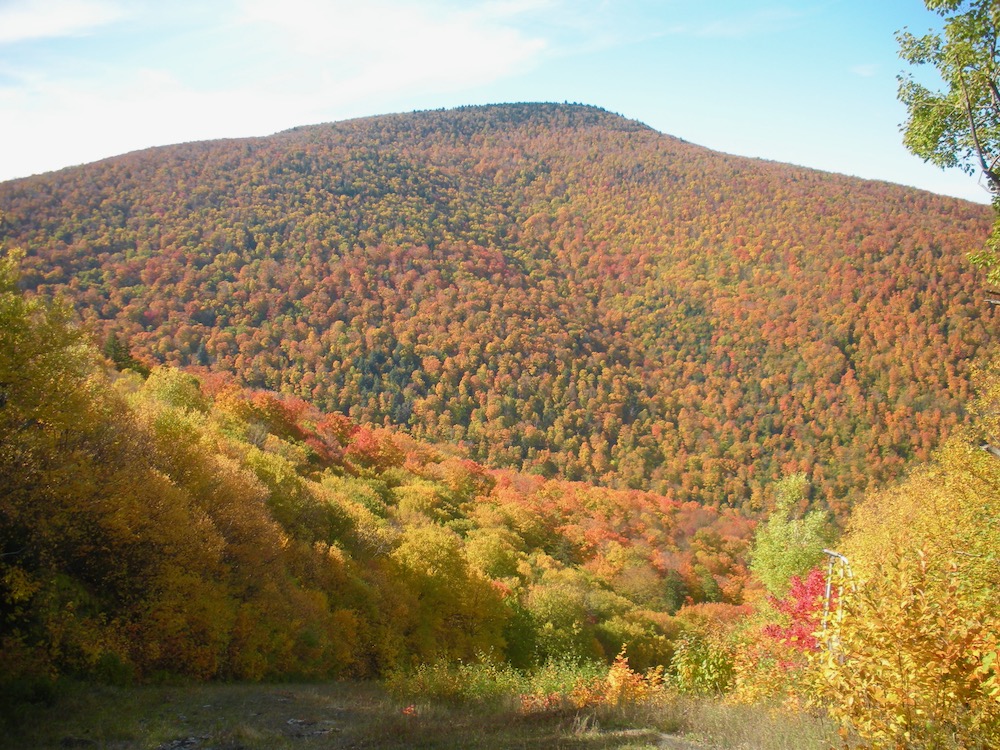 The weather was perfect. I peeled off the Thruway at Saugerties. Driving to Palenville, I stopped for a second cup of coffee at the Circle W Market – highly recommended. Then I continued towards Hunter.

The Catskills have been referred to as “the mountains with one side” because of the steep east facing slopes that gradually fall away to the west. Geologically speaking, they’re a dissected plateau rather than mountains. According to visithtecatskills.com, flowing sediment and water eroded parts of a plateau to create this steep, forbidding landscape.

As the shortest route to Hunter’s summit, Becker Hollow might be as attractive to novice hikers as Cascade is in the Adirondacks. I hadn’t expected crowds in the Catskills, but on Columbus Day weekend, a policeman was ticketing illegally parked cars at Kaaterskill Falls. At Becker Hollow, I was fortunate to squeeze into the last parking spot. 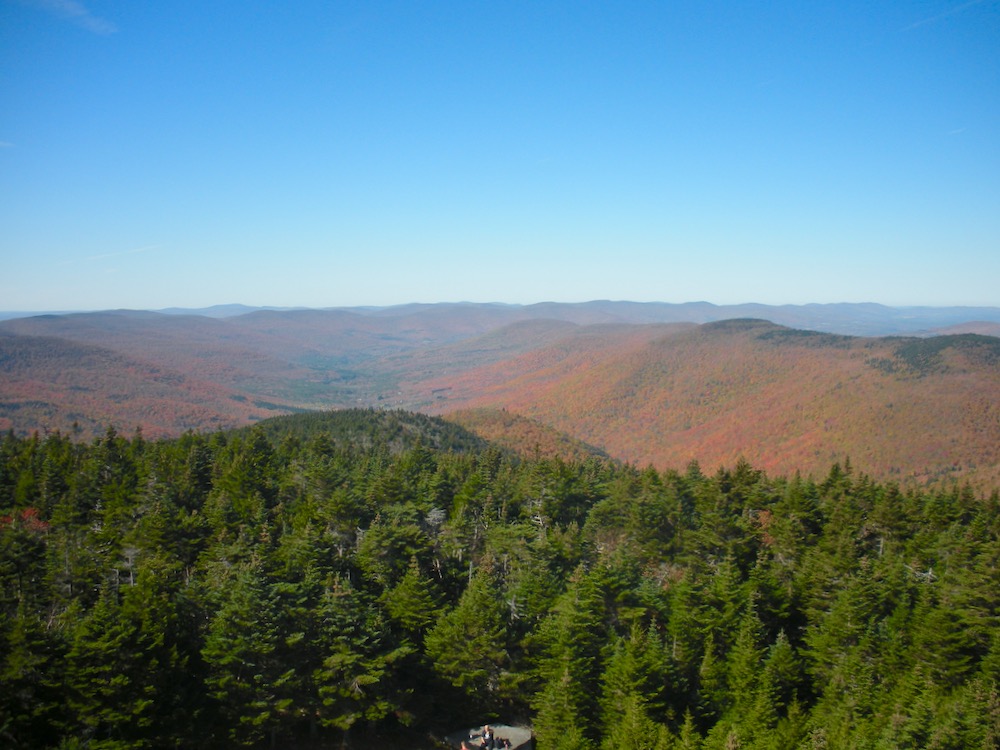 The first half mile from the traIl head followed a brook; flattish, easy going. After crossing the brook, I came to an old concrete dam, and that’s when the fun began. The trail ramped up and away from the brook. The first mile took 26 minutes; the second mile, 46.

The trail lived up to the adage, “you know you’re in the Catskills when there’s two rocks for every dirt.” Loose rocks littered the trail. Here and and there, I clambered over rock ledges. Steep grades were leavened by the occasional flatter section. As I gained altitude and it cooled off, there was more color and fallen leaves.

Approaching the last, and steepest, pitch below the summit, I saw a couple with a toddler in a baby backpack… it brought me back to the days when I schlepped our daughter up Noonmark and the Crows in Keene Valley. Glad I don’t have to do that any more. 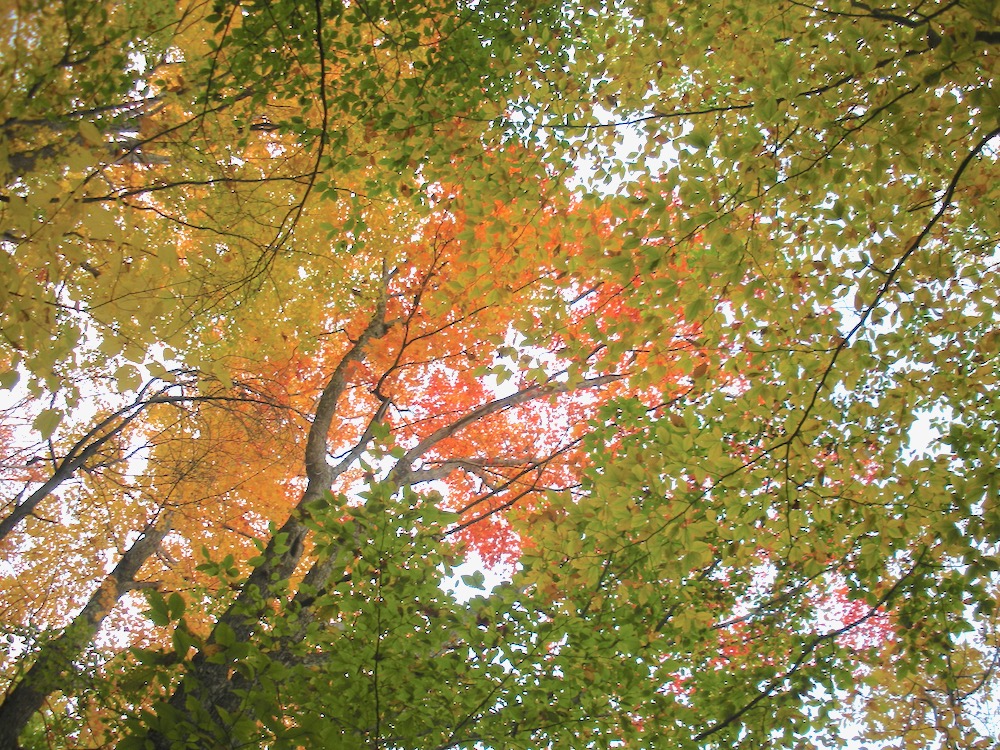 Then suddenly I topped out on the summit plateau, and jogged through a corridor of pines to the summit. Without the fire tower, Hunter’s summit would be unremarkable. The fire tower is in a large clearing circled by pine trees. There were picnic tables and a summit stewards’ cabin. Maybe four dozen people chilled out, enjoying the warm sun and the summit vibe. I spent a few minutes in the tower grokking the view. The steward said that Monday, 14 October, would be the last day the fire tower would be open this year.

Leaving the fire tower, I continued towards the Colonel’s Chair on the aforementioned fire road. Smooth and just wide enough to accommodate vehicles, it was a welcome break from the unrelenting steep of Becker Hollow. As I was running, I met several groups, including the guy above, heading to the summit. Some were carrying cups of beer. Turned out that Hunter ski area was having their Oktoberfest today.

I turned in to the Colonel’s Chair trail and descended towards the ski area. Another mile of rocky pitches, but not nearly as steep as what I’d come up. One open glade, one last turn, and the trail became a maintenance road for the ski area. I passed generators and communications towers and arrived at the chairlift atop Hunter West. Walking about, I saw a refrigerated trailer with kegs of Spaten tapped. Nothing against Spaten, but there are some fine local brews to be had. 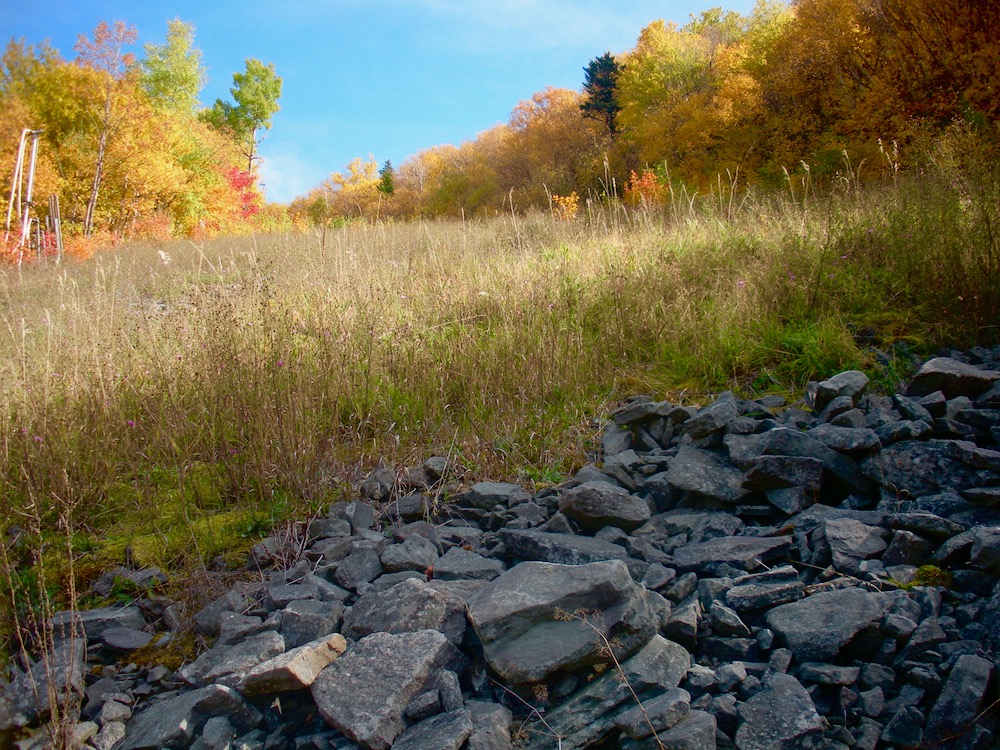 One ski area’s black diamond might be considered intermediate elsewhere, but Annapurna, a double black diamond, is no joke. When I dropped in, it was steep but a reasonable descent. Then it just got stupid. With an average grade over 21 percent, it was just what I was looking for. Chapeau to you who ski these steep slopes.

As I descended, I got to a talus field with treacherous footing. Beyond, waist-high brush. In the distance, a lift at the base of the trail beckoned. But I’d started late enough that it was time to turn around.

That short section of Annapurna was steep enough that it took 15 minutes to climb the quarter mile back up to the lift. After stopping to eat something, I retraced my steps to the Colonel’s Chair trail. Going up the jeep road, I encountered many of the people that I’d seen earlier in the day.

As I picked my way down Becker Hollow, sunlight shafted through the leaves. Today, I didn’t make my goal, but it was a great day to be outdoors.

5 comments on “Hunter, the Hard Way”