I’ve had the idea of kayaking around Esopus Island stuck in my head all summer. I first became aware of it when I was perusing a map, looking for new spots to paddle. It sits in the Hudson River, near Hyde Park, very close to easy launch spots on either side of the river, at Mills Norrie State Park and Esopus Meadows Preserve. 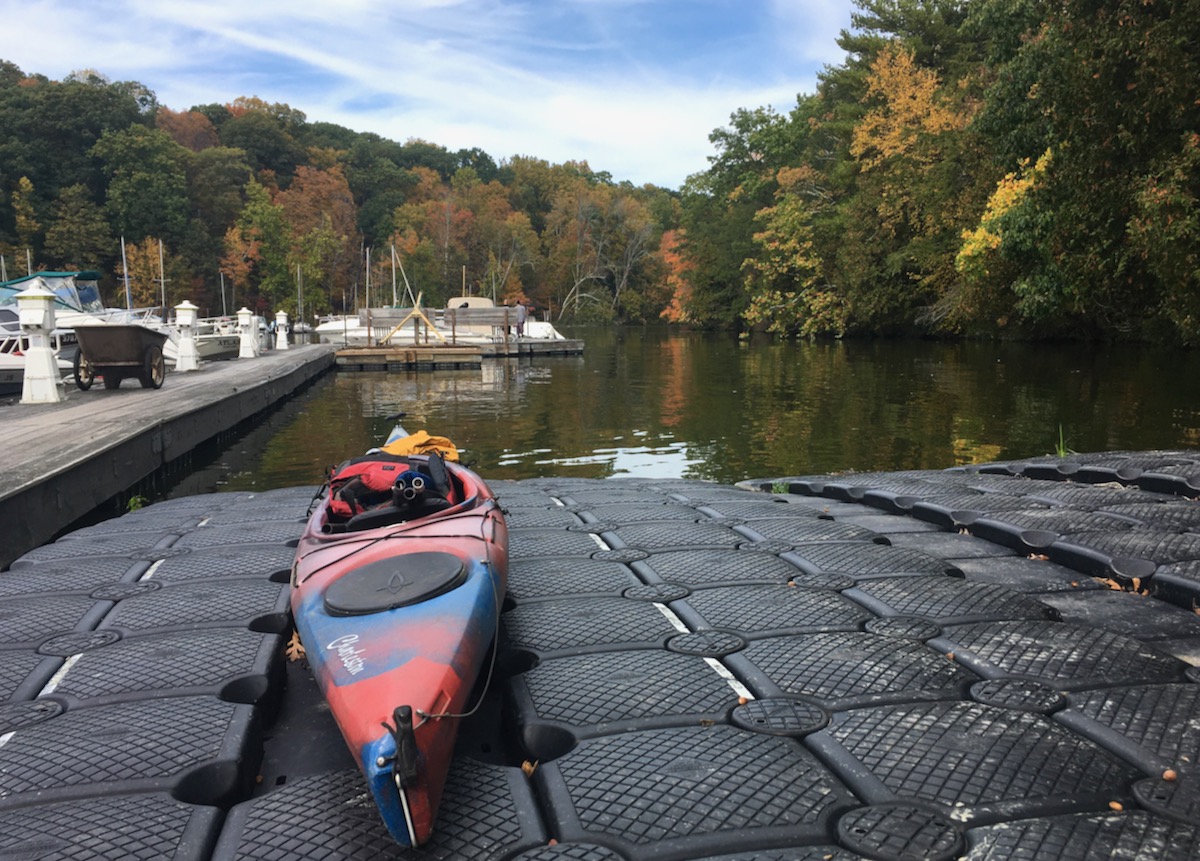 I read up on the history of the place. The number of articles online surprised me a little. I found all the normal historical stuff typical of the Hudson Valley. It was presumed to be used by the Lenape Indians before white settlement of the area. The British anchored their fleet there before attacking Kingston during the Revolutionary War. Called Pell Island, it was part of a large estate owned by a wealthy guy named Pell.

After a little more research, I discovered the island has a few camp sites on it. Interesting. I started thinking about looking for a put-in a little further away so I could justify a two day trip.

Then, in the middle of the Esopus Island Wikipedia entry, my mind exploded. A guy named Aleister Crowley spent forty days on the island, camping, translating the Tao Te Ching, painting Thelemic slogans on the rocky cliffs and meditating. 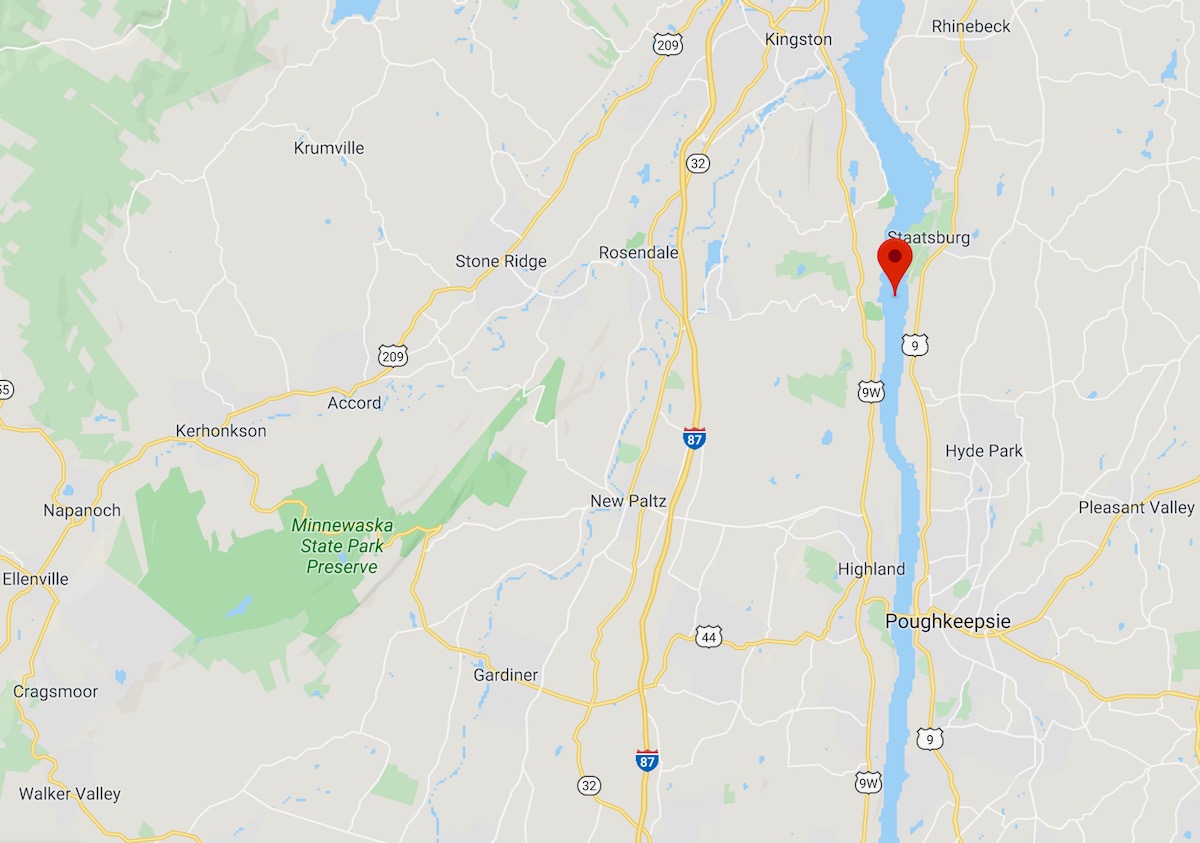 I was gobsmacked by this revelation and it drew me into an epic Wikipedia spiral. I had never heard of Aleister Crowley or Thelema. It turns out he was deep into the occult in the nineteenth century, belonging to a secret society called The Golden Dawn.  He was a German propagandist — no wait — a British double agent during the WWI. Camping on Esopus Island may have been the most mundane thing he ever did.

Thelema is a philosophy based on Western Esotericism. For fear of offending any devout Thelemites that might be reading I will not try to explain it. One thing became clear: I had to get my ass (kayak) to Esopus Island.

The summer went quickly. I had plenty of fun but I never got to my Esopus Island camping trip. When I did paddle, I didn’t have quite enough time to do it an hour and a half away from home. Finally, last weekend, after a baseball tournament, chauffeur duty for a sweet sixteen party and a soccer game, I had a window. 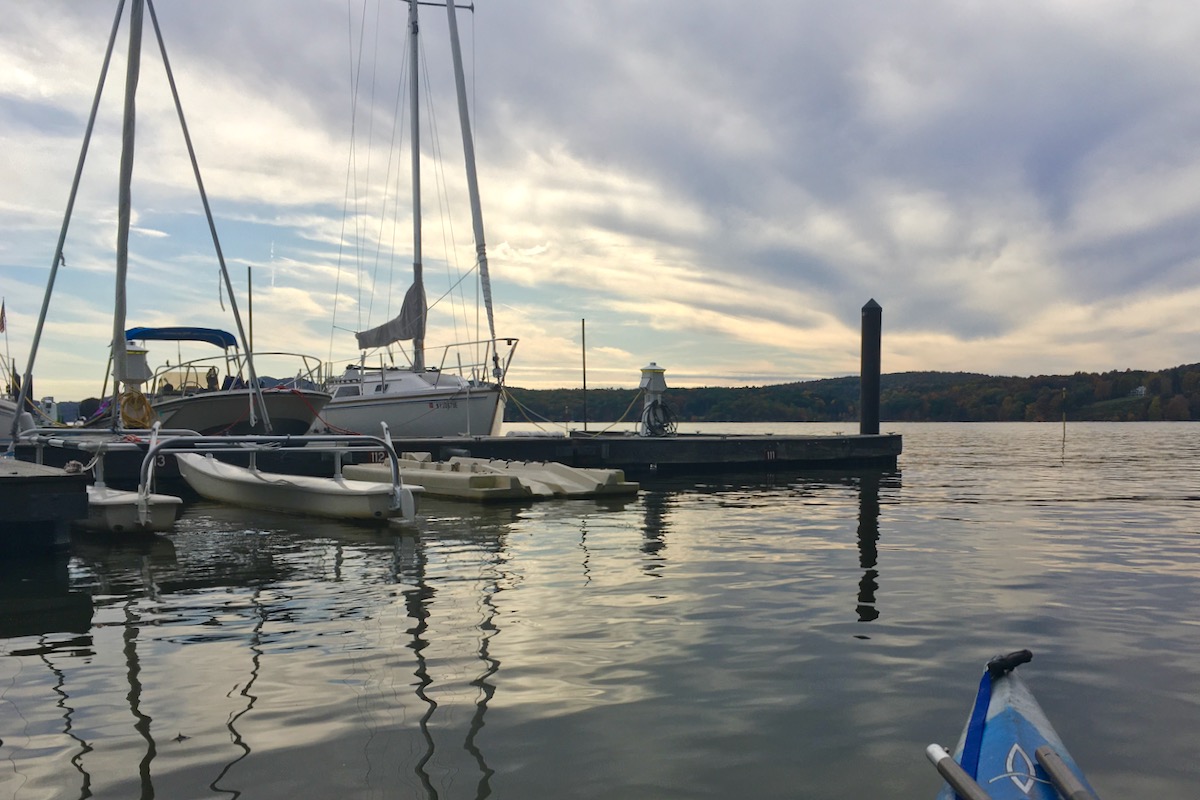 I figured it would be nice fall-foliage-viewing-opportunity. I was nursing a sore back so in an effort to take it a little easy, I chose my smaller kayak to load on top of the truck and headed to the closer launch option I’d identified: Mills Norrie State Park in Staatsburg.

At home it was about sixty degrees Sunday morning. I wasn’t sure how the temps would be in Staatsburg so I brought a few layering options and a change of clothes in case I went for a swim. I decided a long sleeve undershirt would be plenty but I rolled up a Gore Tex anorak and jammed it under the deck bungee just in case.

There’s a small marina at Norrie Point. The bad news is they’ll charge you $3 to launch your kayak there. The good news is they have a kayak-specific floating dock so launching and landing there is an easy and, more importantly, dry process, great for when there’s a little chill in the air. I arranged my gear the way I like it, fastened the skirt to the cockpit and got on the water around 2:20 PM. 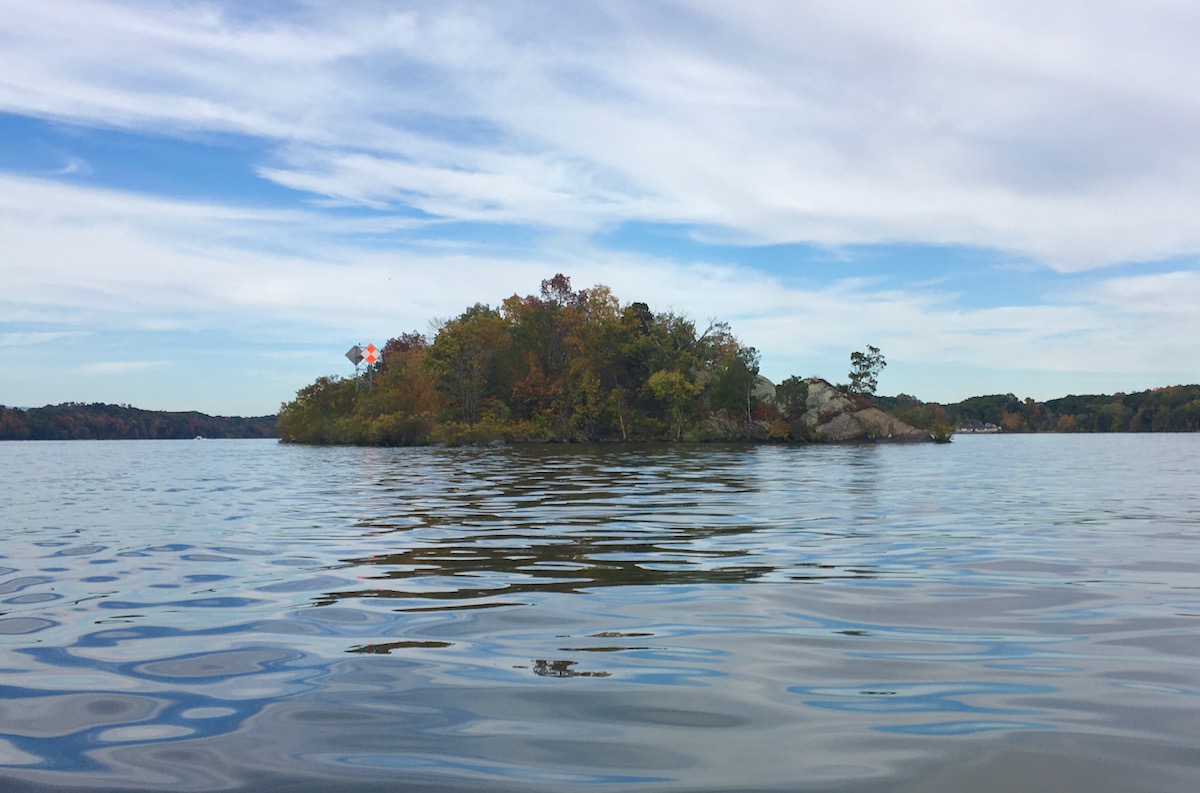 As I paddled out past the marina’s docks, I noticed a little marsh to the right and made a mental note to check it out if I had any gas left when I got back. As I made my way out into the Hudson I noticed a giant castle-like building rising up out of the trees on the far shore. I had no idea what it was — a college maybe? More research to do.

It was hard to see Esopus Island as I paddled south. From a distance, the heavily wooded island blended into the heavily wooded western shore of the river. My idea of where it ought to be was confirmed when the bow of a distant ship disappeared behind the southern end of the island.

I strived for a steady rhythm as I paddled south. In no time, I was dodging some submerged rocks north of Esopus to steer my boat around to the western side. The northern part of the island is wooded but I could see some flat-ish clearings behind the trees that would be good for camping. The water was pretty calm for the Hudson, probably due to the reduced boat traffic of the fall season. 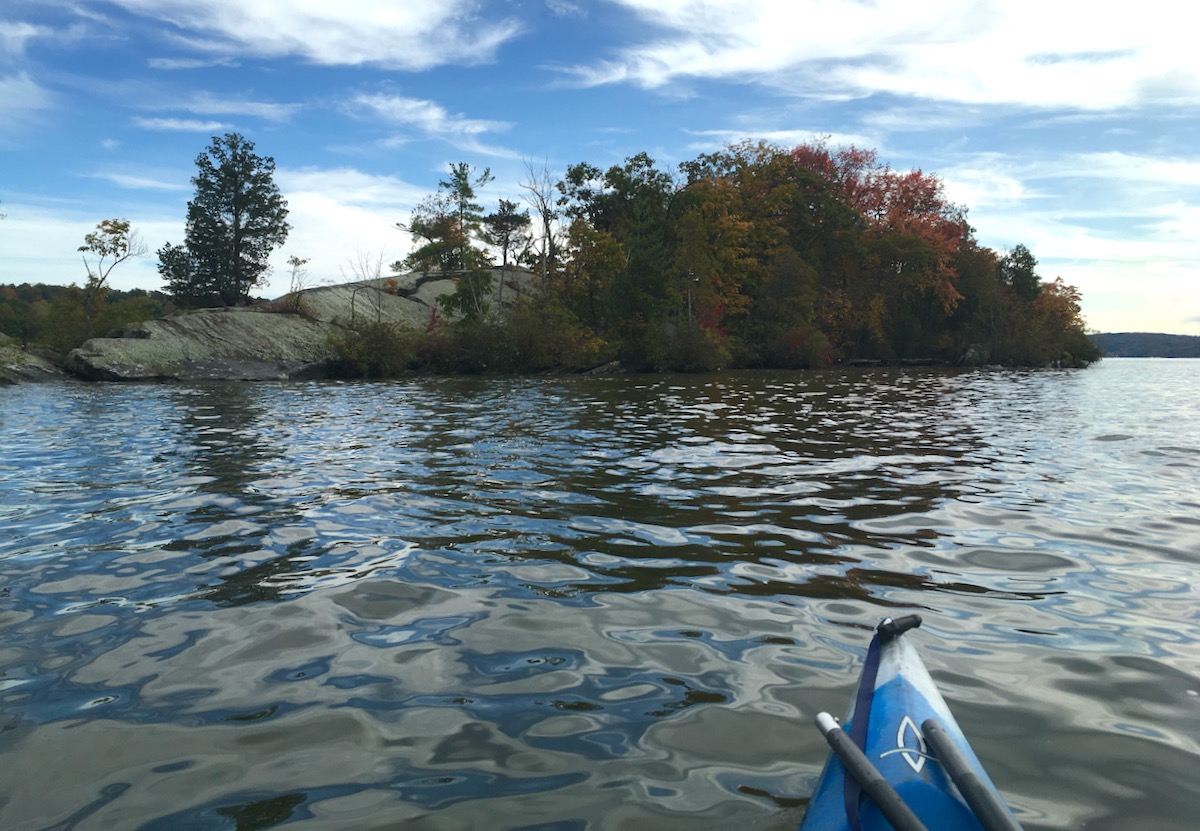 When I spotted two power boats on-plane, zipping south at high speed, I slipped into a little cove on the western shore before their wakes reached me. The southern part of the island was more rocky. For a moment I was transformed, picturing Aleister Crowley hanging on the cliffs, painting his religious slogans.

I went around the rocky southern tip of the island and paddled back north. I was back at Norrie Point in an hour so I explored the river to the north for a little while. Once I made it around a bend in the river, I could see the Esopus Meadows lighthouse in the distance, as well as the Rip Van Winkle tour ship, presumably out on a fall foliage tour out of Kingston. I sat and waited for the Van Winkle to reach me, then turned back south and paddled hard to see if I could keep pace for a little while. 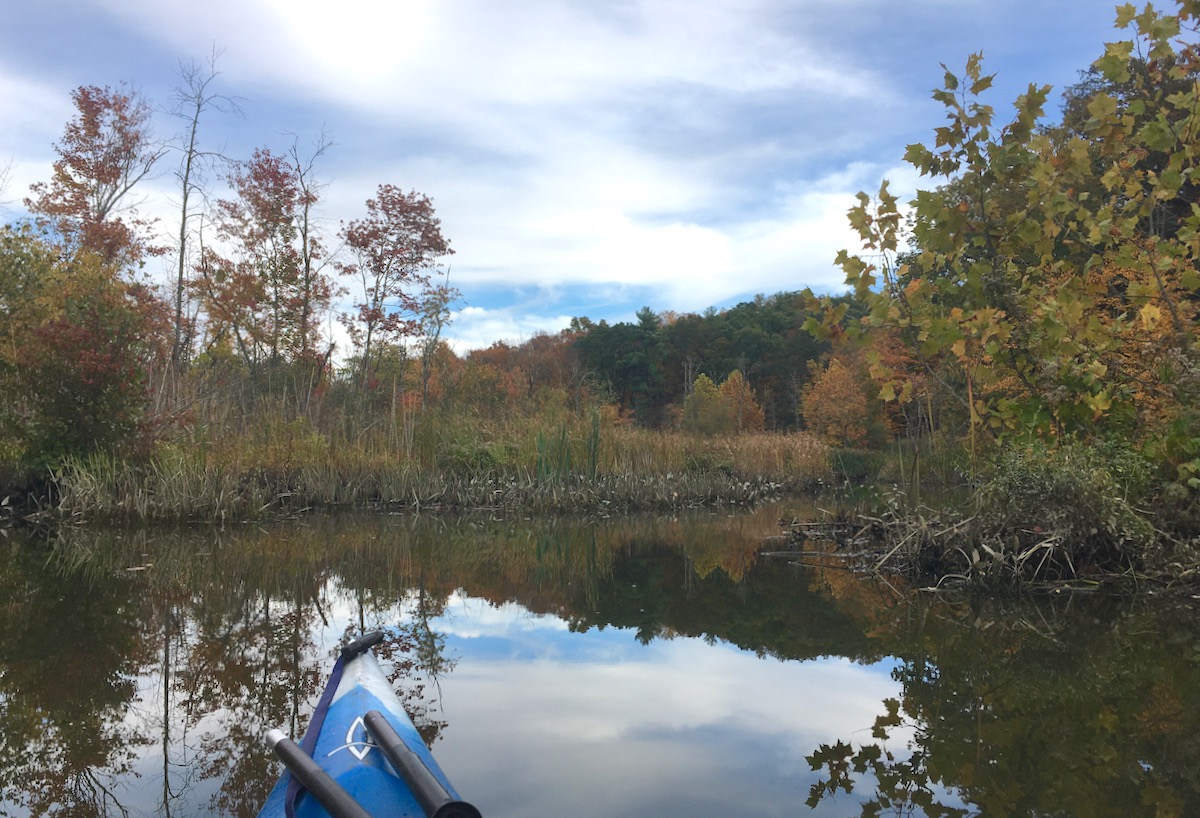 When I was done playing around, I decided to go check out the marsh I’d seen when I launched. From the marina it didn’t look like it went back very far but once I was back there I discovered a tunnel under the park road that led me to more swamp on the other side. I pushed further, disturbing some ducks as I did. Then I found another tunnel under the Metro North tracks and more channels to explore back there. My way was eventually blocked by some downed tree trunks so I made a three point turn and headed back to the dock.

It was a fun paddle. As I loaded up my gear, I asked one of the marina employees if he knew what the big castle-looking building on the other side of the river was. “Oh yeah, that’s the Brudenhoffers.” Wait what, I thought to myself, who the hell are the Brudenhoffers? “Yeah,” the guy told me, “It used to be a monastery but then the Brudenhoffers bought it years ago.”

I paused long enough to punch “Brudenhoffers” into my phone and got back on the road. What a day. And the leaves were pretty too.