Saturday was the grand re-opening of the Little Gore Ski Bowl. The ski area was the destination of the ski trains in the 1930s and operated until the mid-1970s. 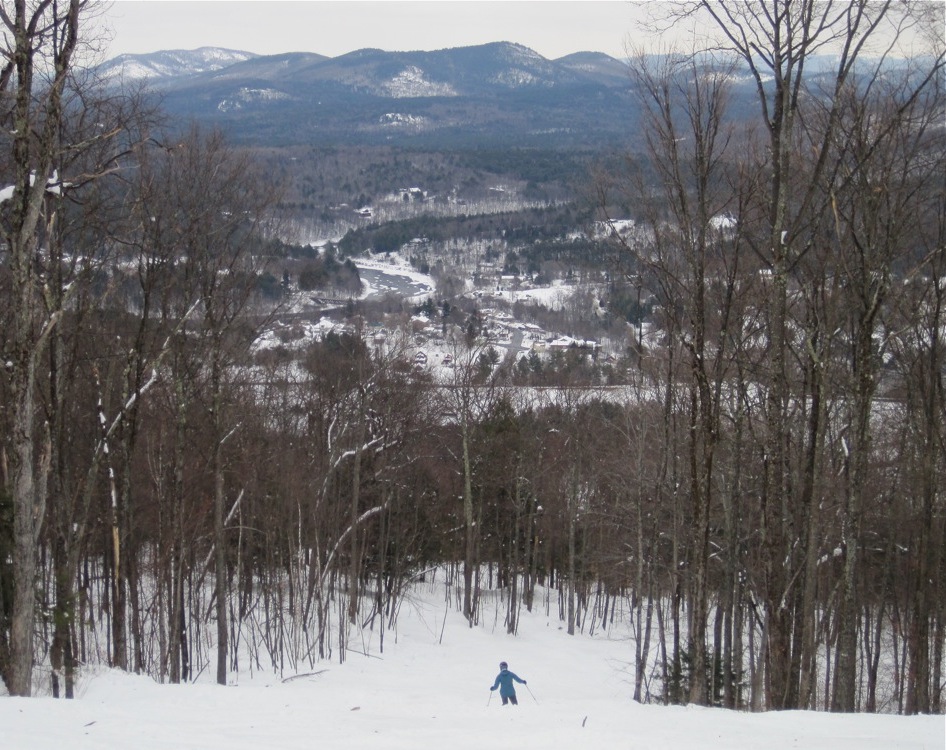 Along with the rebirth of Hickory and Big Tupper, the Little Gore Ski Bowl is a third historically important New York ski hill that has come back to life over the last couple of years. In addition, Saturday represented another step forward in the long term plan to connect Gore and the town of North Creek.

This morning’s “ribbon cutting” for the opening of the Gore Ski Bowl — scheduled for 10:30 — seemed like a chance to stand around and commemorate, when there was skiing to be done. We wanted to do something special on the occasion of the official opening of the link between Gore Mountain and the historic Little Gore Ski Bowl. 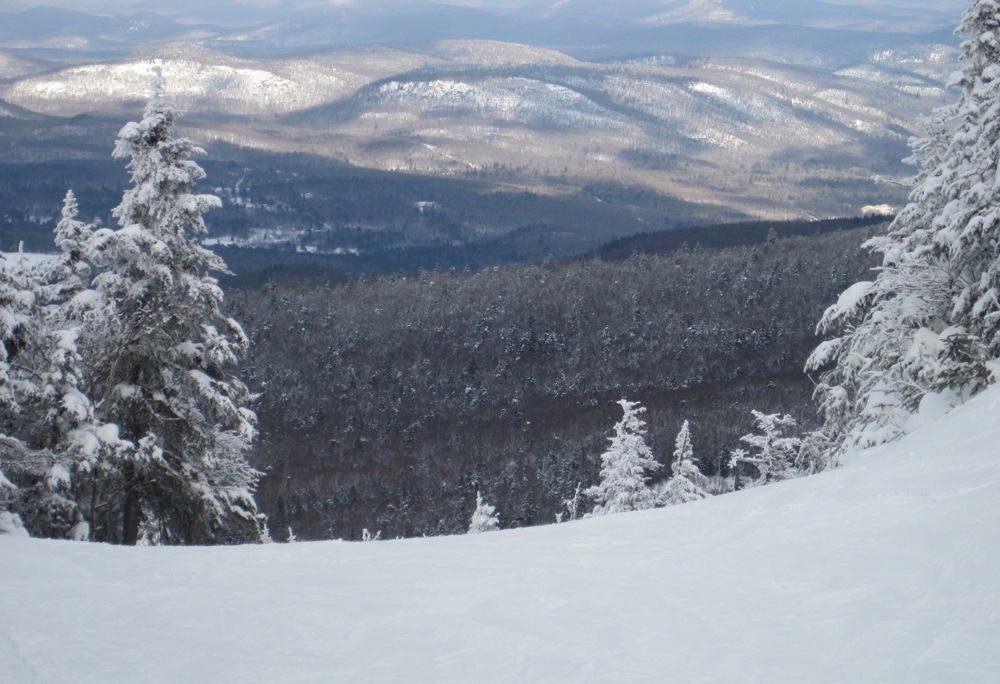 Zelda and I decided to ski the interconnect as completely as possible from the Summit of Gore Mountain to the Ski Bowl in North Creek and back to the base of Gore.

Zelda and I decided to take the back way to the summit, riding the Adirondack Express, and cutting over on Wood In — the first of the day’s traverses. 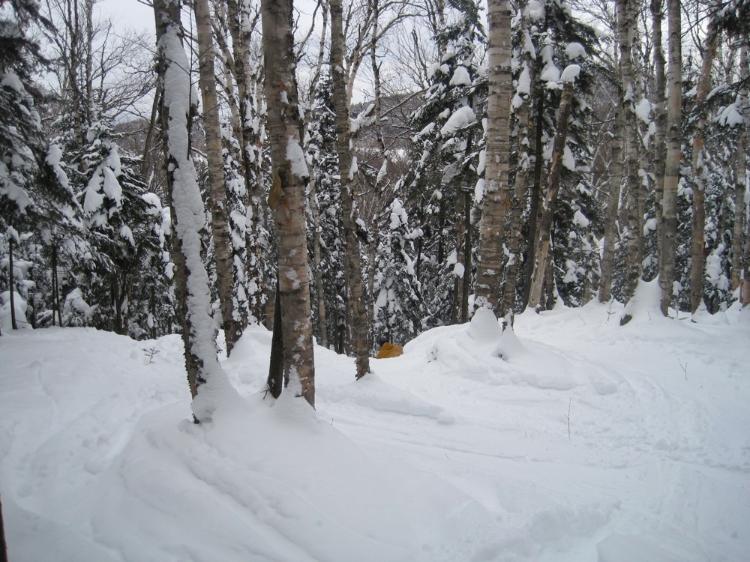 Down to the High Peaks Chair, and up on the lift. We noticed Uncas was getting the guns. I like it when you get to the part of season where you aren’t thinking about manmade snow. Still it looked inviting.

To reach the true summit of Gore, we had to get over to the Straightbrook Chair. Zelda took Open Pit and I chose Lies. Both headwalls were difficult, with soft snow beneath. We left the summit of Gore at 10:50 am, and headed down. 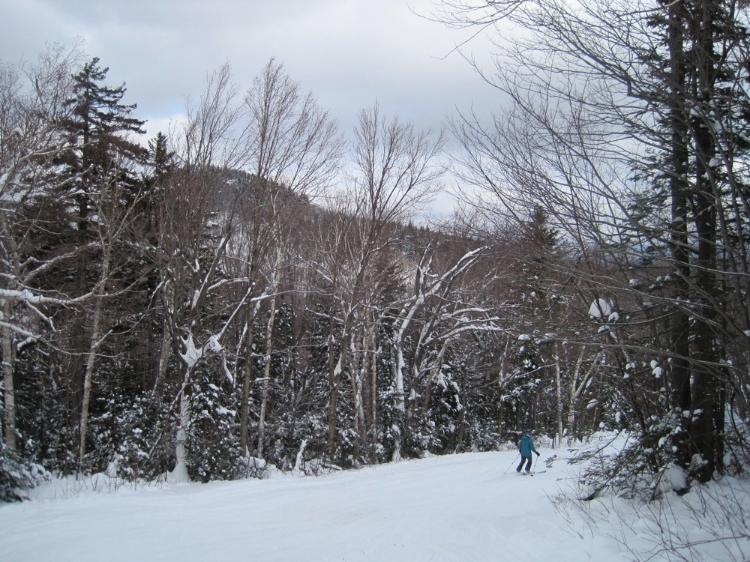 Down through the DarkSide for me. Zelda did Lower Darby. Out the back door through Wood Out.

I realized I had never been on Wood Out. I’d assumed it to be another traverse, bit it actually had some solid blue pitch. From the North Side we skated Pipeline. When you get to the intersection of Pipeline, Eagles Nest and Peaceful Valley you feel you’re arriving somewhere new. 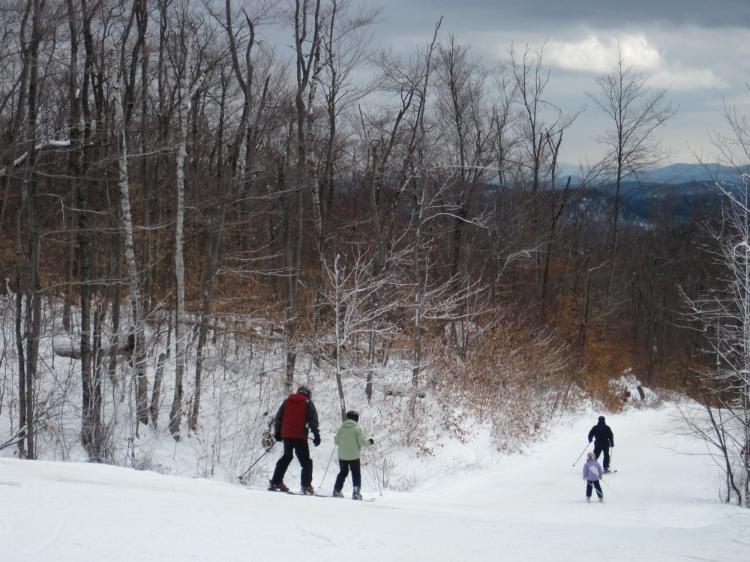 We approached the Hudson Chair from above, for the first time on skis.

Down in the Ski Bowl, Moxham actually had some of the best snow we skied today. Our plan was to get a hot dog at the Ski Bowl Base Lodge, and then lap it. Both Oak Ridge and Moxham skied very old school, narrow and following the contour of the land. 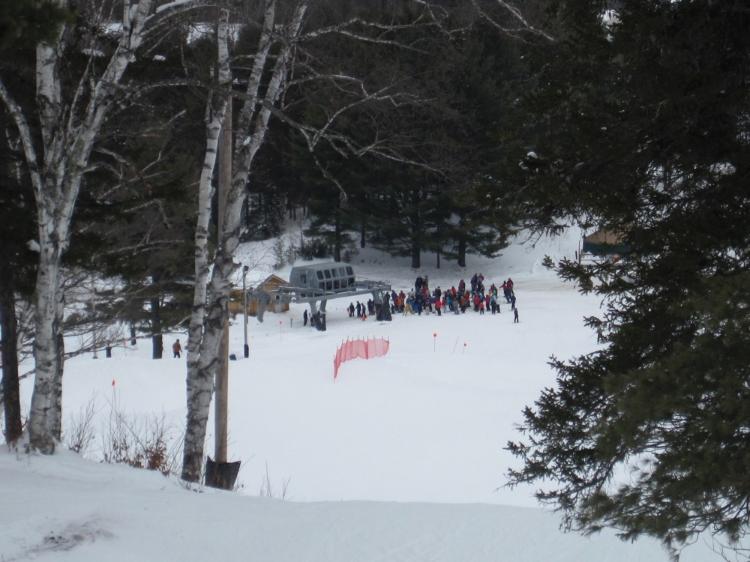 This trip from Gore’s summit to the Ski Bowl took about 45 minutes, at a leisurely pace. On the way we stopped to chat with others making the trek. After a break in the lodge, we headed back up the Hudson Chair, and made our way back to the base of Gore.

Zelda knocked off for the day, and I went up top to ski the Dark Side, Tahawas and the great snow on Uncas. I just missed High Pines as patrol was roping it as I went over on the Topridge Chair. By alpine standards, the afternoon on Gore’s summit was certainly better skiing. It was faster with more vertical and deeper snow. 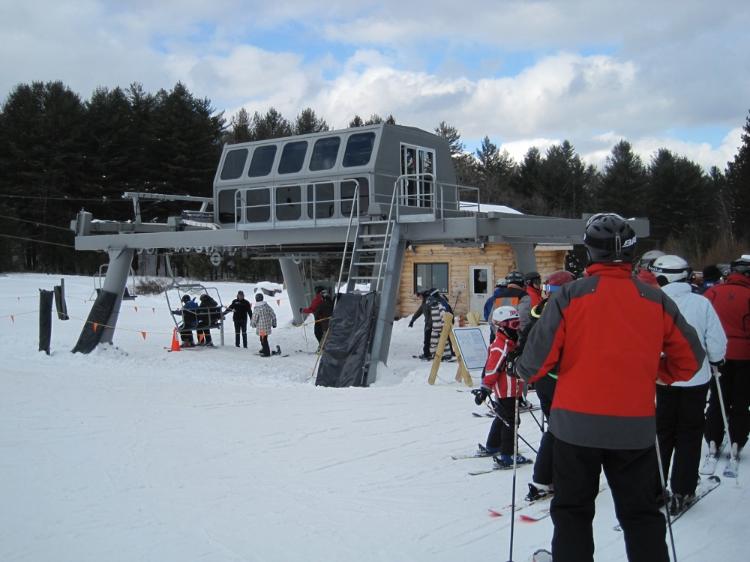 But we definitely felt that the interconnect traverse was the highlight of the day. There was a quite a group skiing down from Big Gore, and everyone you talked to really had a sense of the history that was coming to life.