For me, there is no adventure without logistics. If I’m going to ski something fantastic and life affirming I’m probably going to have to do some work in advance. Some of that prep can be exciting, like deciding what skis to pack, and some of it is housekeeping and clearing my schedule. 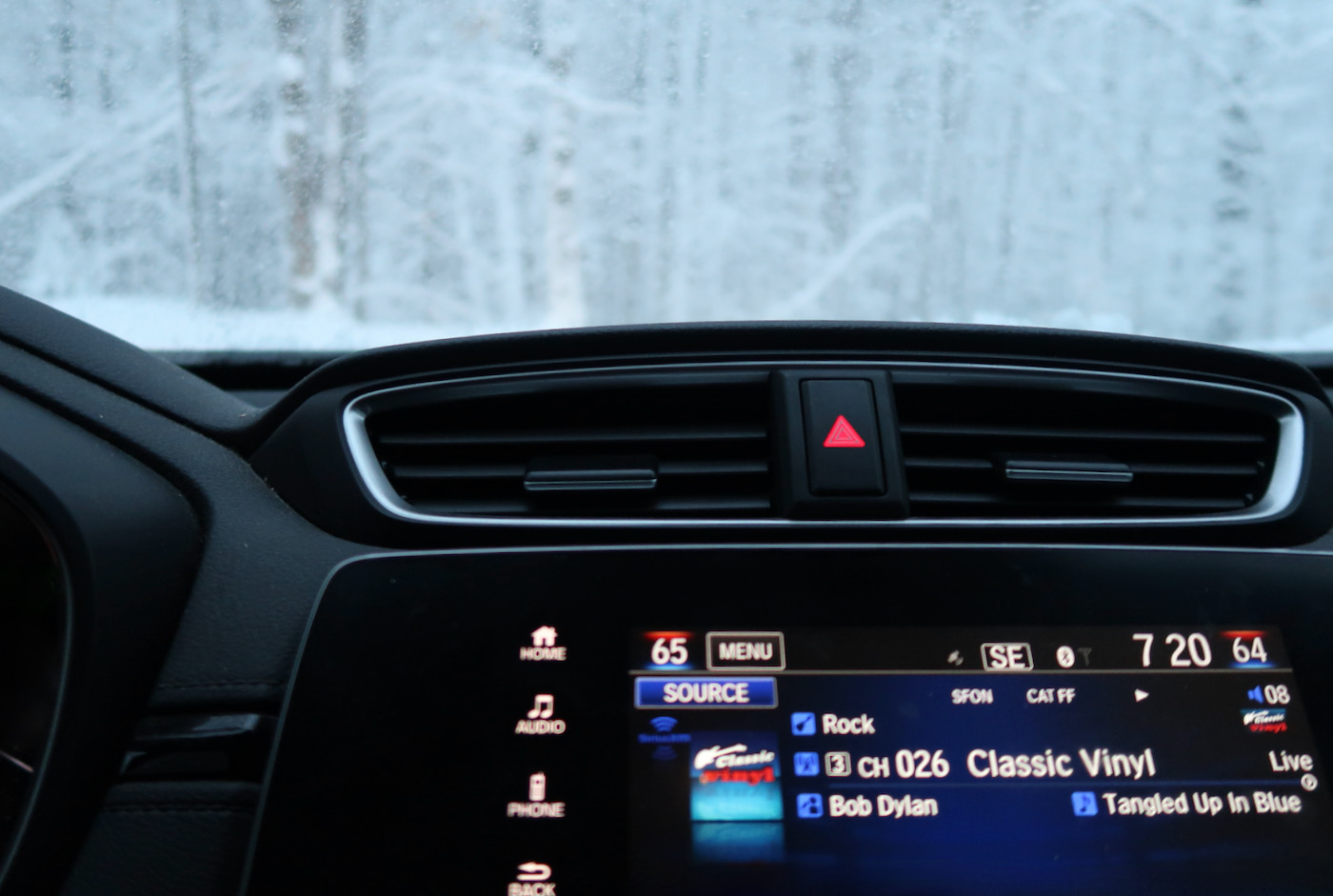 I follow the GFS 240 hour snowfall forecast to help me anticipate opportunities. In early December, a large storm appeared at the outer limit of that forecast.  On subsequent model runs the storm came and went a few times, out to sea and then drifting back into play. Soon enough though, it started to look like we were on to something.

After an exciting drive last year in a similar storm, I was determined to leave early enough to reduce the drama.  I asked our resident weather guy Jason to help me understand the timing of the approaching event.  When would snow start to fall, and when would it begin to hinder travel? 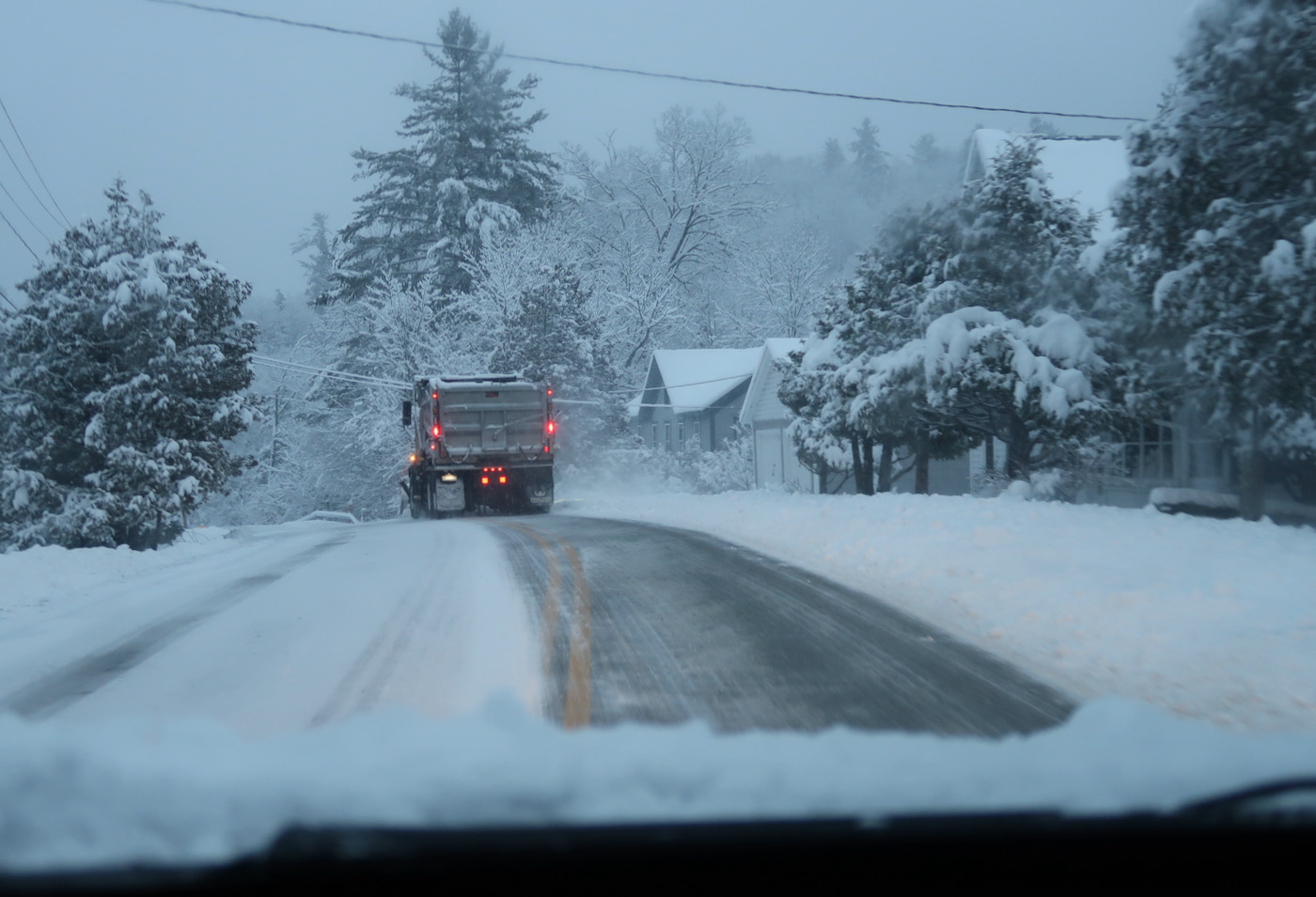 In truth that’s a nerdy question, more suited to Skiology than anyone else. Jason gave — what felt to me like a non-answer — that ultimately turned out to be precisely correct. “You’ll be driving up the Hudson Valley and there won’t be any issues. The only snow will fall in the mountains.”

With snow forecast to start in North Creek at 7pm on Thursday, I left work around 1pm, sailing smooth almost all the way. It rained and sleeted in New Jersey, but when I got into New York it was cloudy and dry. I arrived as planned around 6:30 pm.

I got my gear into the cabin, lit a fire, parked the car at the bottom of the driveway, and then waited for the snow. And waited and waited. The radar showed snow just off to the south and west, in Speculator and Indian Lake. NWS — the National Weather Service — changed the start of precipitation in North River from 7pm to 9pm, and then again to 11 pm.

If you think you can’t sleep when it’s snowing, try sleeping when it’s supposed to be snowing. At 11:45 snow finally started to fall, and I tried to sleep. At one point, I got up, flicked on the porch light and saw four inches of new snow. Satisfied, I went to back to bed and slept until 6am.

When I rose, there was eight inches on the ground at this point and it was snowing hard.  I made coffee and then walked down to the end of the driveway with a broom and shovel.  The plow snow blocking me wasn’t compressed, and I made quick work of it by hand. Then I broomed off the CRV, and headed back up the hill to the cabin.

After a quick breakfast, I drove down to what might be considered the main road in North River, 13th Lake Road. If you’ve traveled 13th in a snowstorm, you’re probably like me, happy to be stuck behind the plow for the few minutes it takes to get down to the river.  It felt like a good omen.

The mountain was still somewhat deserted at 7:30. I booted up in my usual spot and moved to where the climate suited my clothes, outside, in line for the gondola. Maybe it’s old age, I’m starting to become a fan of gondolas. At Belleayre last week, and at Gore this weekend, it was nice to come in out of the snow to warm up, and check messages.

The first runs down the front were dreamy and soft. Anywhere people had already skied was exceptionally good. Untracked snow was all over the place, some skiers were avoiding it, as it was deep and heavy to turn.

When ropes dropped on Topridge, Uncas and Pine Knot, the lighter weekday crowd grabbed untracked snow for three or four runs. My first run down Uncas was my best of the day, and maybe the weekend.

The snow continued steadily, all day long. Gore is a big mountain, that gets significantly bigger when you add a foot of snow. As the snow piled up, I knew opportunities were developing all around me. But I was skiing alone, and I went where I was told.  It didn’t matter, it was all excellent skiing, wherever you went. I skied everything that was open, and called it a day at 2:30.

When I got back to camp, it looked like Andy had plowed me at the perfect time, early afternoon. I scampered up the drive through another two or three inches of snow. By this point, we’d had at least 16 inches.

I did my best to track out our nordic ski trails. I didn’t get too far, skiing the smaller half of the yellow trail and the one “big hill” on our trail map. My legs were shot and I was breaking trail 100%. I was in bed at an early hour, ready to sleep, yet still overwhelmed by all the snow that was surrounding me.

It was still snowing when I woke up, we’d had more than 30 hours of continuous snow. I know it’s not that unusual to get consecutive days of snowfall out West, but for a synoptic storm in the east, it was quite a performance. I’m calling it 24 inches of snow at our place: 1900 feet in North River.

It finally stopped snowing just before first chair on Saturday. I caught first gondi with Cork and Mike, and was able to stay with them for one glorious lap. Back to the top of Bear Mountain, I noticed Killkare was open. It one of my favorite glades on Gore’s map. It’s hard-ish to lap, so the snow stays fresh.  With summit views, it’s classic Gore terrain with the steepest section at the end. Bear Mountain Patrol told me it had been worked on extensively over the summer and it showed.

By early afternoon I was out of gas. For some reason, I felt I had to make it to the top.  Maybe it was the historic nature of the December storm. I’d skied everything that was open, and ducked into every open glade that crossed my path. Without WoodIn in the trail mix, the only way to get to the top was to go all the way back down to the base. Twister was sitting there in the sun, looking all easy-going and I started carving big lazy arcs on my way to the bottom.

I surprised and delighted to see Twister Glades open. A wise skier once said “when Twister Glades are open, you know it’s a great day at Gore Mountain.” And he was right. 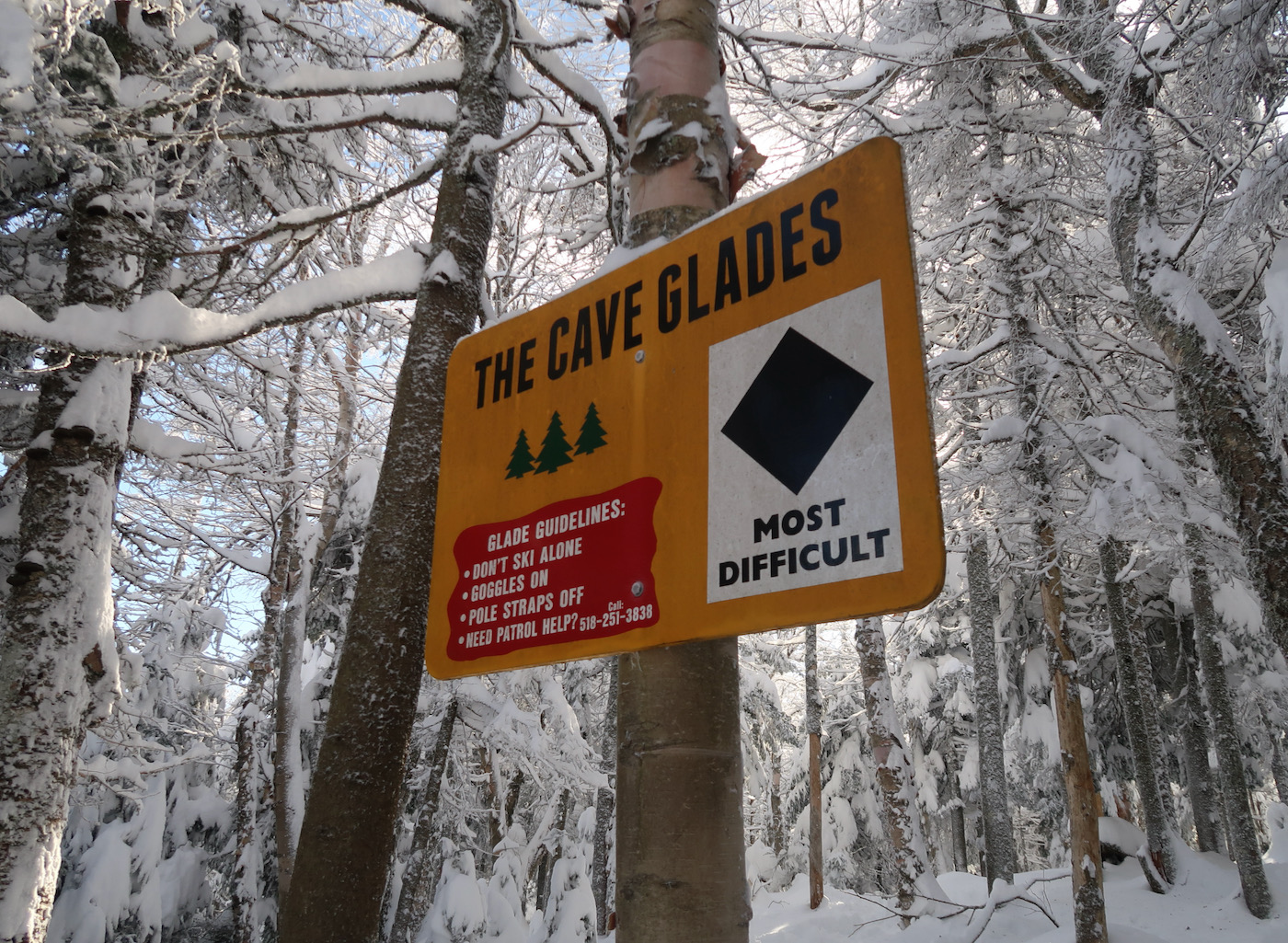 I had one run in me from the top, I chose Chatiemac on principle. I’d run into Bone in the Saddle Lodge the day before, and I told him I loved what they did with Chatiemac last spring, burying it deep and leaving it largely ungroomed.   Today I was there to represent.

When I finally got off the hill, I drove back to camp, knowing full-well my planned early am drive to Plattekill’s opening day was out of the question. With pipes to drain that would be a 4am alarm, and I new I couldn’t do it without more sleep. I crashed on the futon at 3pm on Saturday and didn’t rise until 7am the next day.

Full circle, back to Jason’s call: Because I headed up so early, I never saw the storm in the valley. As I came out of the mountains on Sunday, I saw how quickly snow totals diminished as I descended.  Still, I’m sure I needed the extra sleep I got, as I slept another 12 hours last night.