This map — produced by the NWS Buffalo Weather Forecast Office — covers more than what is normally considered Western New York.

In winter, Western NY falls under the influence of Lake Erie. Off to the east of Buffalo, there are five counties — Wayne, Cayuga, Oswego, Jefferson and Lewis Counties — that are subject to winds and moisture from Lake Ontario. These counties are included in the NWS Buffalo County Warning Area because of the lake effect snow that falls in those areas. NWS Buffalo meteorologists are recognized as experts in lake effect snow forecasting, and we assume this is why the NWS BUF zone is so spread out.

Lake effect snow is enhanced by elevated terrain that is downwind of the lakes. In the Western New York snowbelts there are two topographic features that provide this kind of snow total amplification: the Tug Hill and Alleghany Plateaus (including the Chautauqua Ridge). 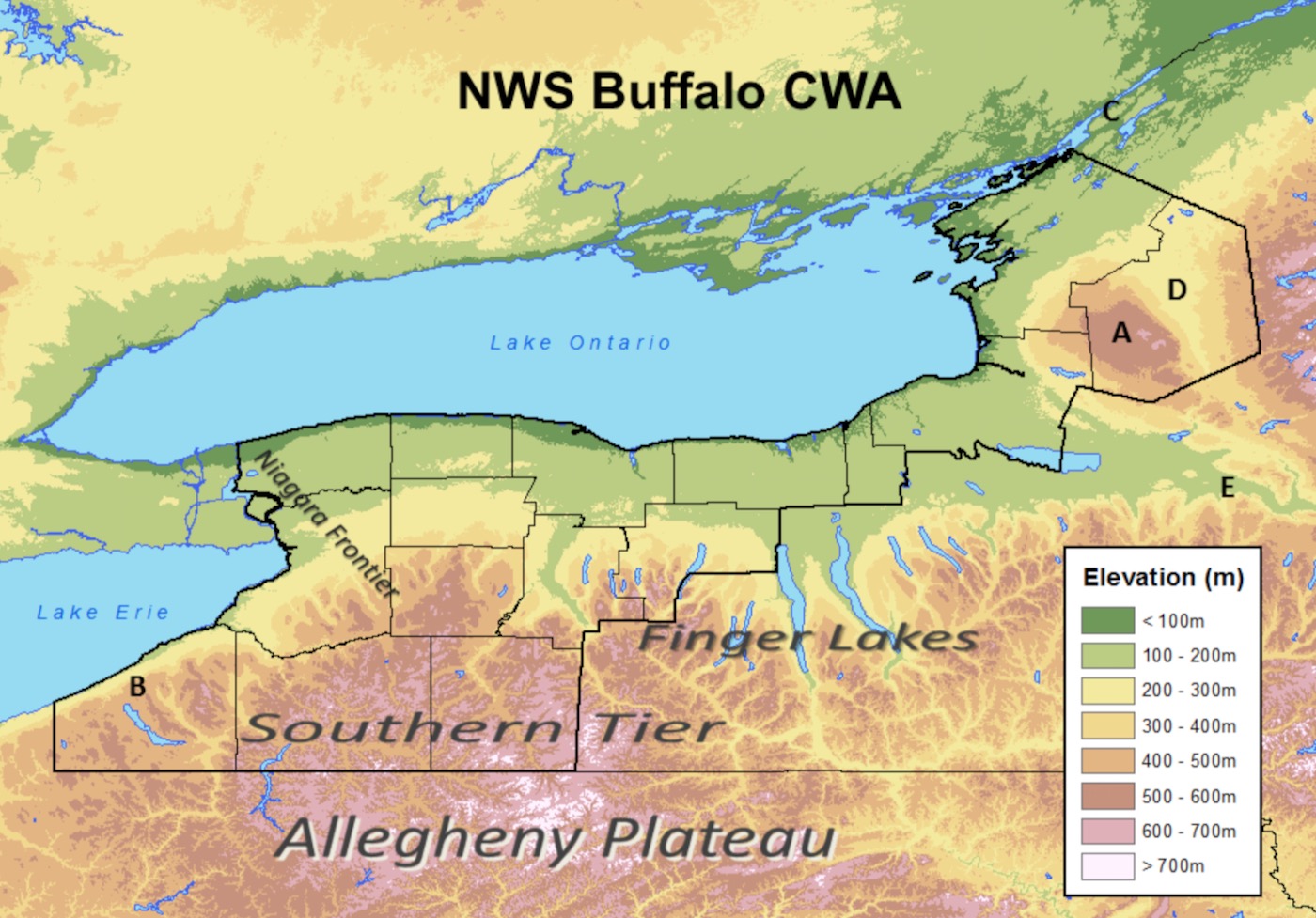 Western NY has a humid, continental climate, with strong modification from the Great Lakes.  Winters in Western New York are generally cloudy, cold and snowy, but also include thaws and rain. Snow often covers the ground from Christmas into March, but periods of bare ground are not uncommon.

Over half of Western New York’s annual snowfall comes from lake-effect snow.

Lake effect snow can be very localized. The location of snow bands is determined primarily by the direction of the wind. Due to the prevailing winds, the snowbelt in Western NY is south of Buffalo, far less snow falls to the north of the city. Lake snow starts as early as mid November, peaks in December, then shuts down after Lake Erie freezes, usually sometime in January.

While Tug Hill is not geographically in Western NY, as mentioned above, it is covered by the NWS Buffalo office. The Tug Hill Plateau is the snowiest populated location in the eastern US.

Technically Tug Hill is not a flat plateau but a cuesta — a 2100 square mile chunk of sedimentary rock — a sloped surface that rises over 1500 feet from west to east, downwind from Lake Ontario. As Arctic air blows across the lake it picks up moisture and dumps it as snow on the slope of Tug Hill.

Lake Ontario is much deeper than Lake Erie, so it doesn’t freeze over in the winter, extending the lake effect season.

Another factor called fetch is defined as the distance that an air mass travels over a body of water. Generally, the larger the fetch, the more precipitation produced. Lake Ontario is nearly 200 miles long, and Tug Hill is in position to maximize the impact of that fetch.

Because of this, it’s not unusual for parts of the Tug to get as much as 300 inches of snow in a season.