This past February I had a ski day with my daughter that inspired me. It still inspires me. She challenged Gore’s steepest terrain and emerged confident and victorious. It felt like a big step.

Dad story alert, opt out if you must.

Last week, on our annual end of summer trip to the mountains, it seemed she made another move forward. And she did it on her own. She had this idea that she wanted to do something, in the woods, by herself, but she wasn’t quite sure what. Mom and I struggled a bit with what that might be, but ultimately did propose an idea.

I was hoping to keep it close to home, to cut down on logistics. Thirteenth Lake is nearby and beautiful and almost 2 miles long, so that was an obvious place to start. We’d send our adventuring paddler south from the state launch, into the wind, towards Elizabeth Point.

We launched her, and then drove over to the trailhead, to walk to Elizabeth Point. We hurried along in the hope of beating her to the campsite. If we were waiting out on the point, as she was coming down the lake, we figured we could avoid any confusion or drama.

Thirteenth Lake runs roughly northeast to southwest and Elizabeth Point is about two-thirds of the way down the eastern shore. We advised her to stick closely to that eastern shore, to stay out of the wind and waves, as much as possible.  She carried was carrying our picnic lunch, and she seemed to get a kick out of that.

When we arrived at the end of the point everything turned out as planned.  Our sailor was paddling across the last cove on the shoreline, confident in the breeze. She landed, we ate lunch, swam and sunbathed on the rock. When the merriment came to an end, she set off again, this time with the wind.

From the trail we couldn’t see her, but she must have come right down Broadway; she beat us back to the state beach in plenty of time. We found her bobbing in the waves just offshore, waiting for us to arrive, before she’d land.

It was a great experience, and would have been enough to make me smile. But on the way back from the lake we learned that she wanted to put our big cheap family tent up, out in our woods. “You know that flat spot, near the yellow trail, that gets some sun.”

Actually I did know the spot. Every time we walk past that spot, the topic of camping comes up. After we returned, mom and daughter assembled the tent. Then we went off to get dinner, take out from Garnet Hill Lodge.

After dinner we did some testing with our two-way radios. Could we communicate between outpost and base? Our walkie-talkies are advertised to have a range of two miles, but of course they don’t go through rock. The campsite was only a few hundred yards away but it was up and over the hill.

From cabin to campsite we could communicate, barely. You couldn’t tell exactly what was being said, but you could understand the tone. “Yeah man I’m chillin” has a different vibe than “holy cow it’s a bear!” It was going to have to be good enough, we were committed. 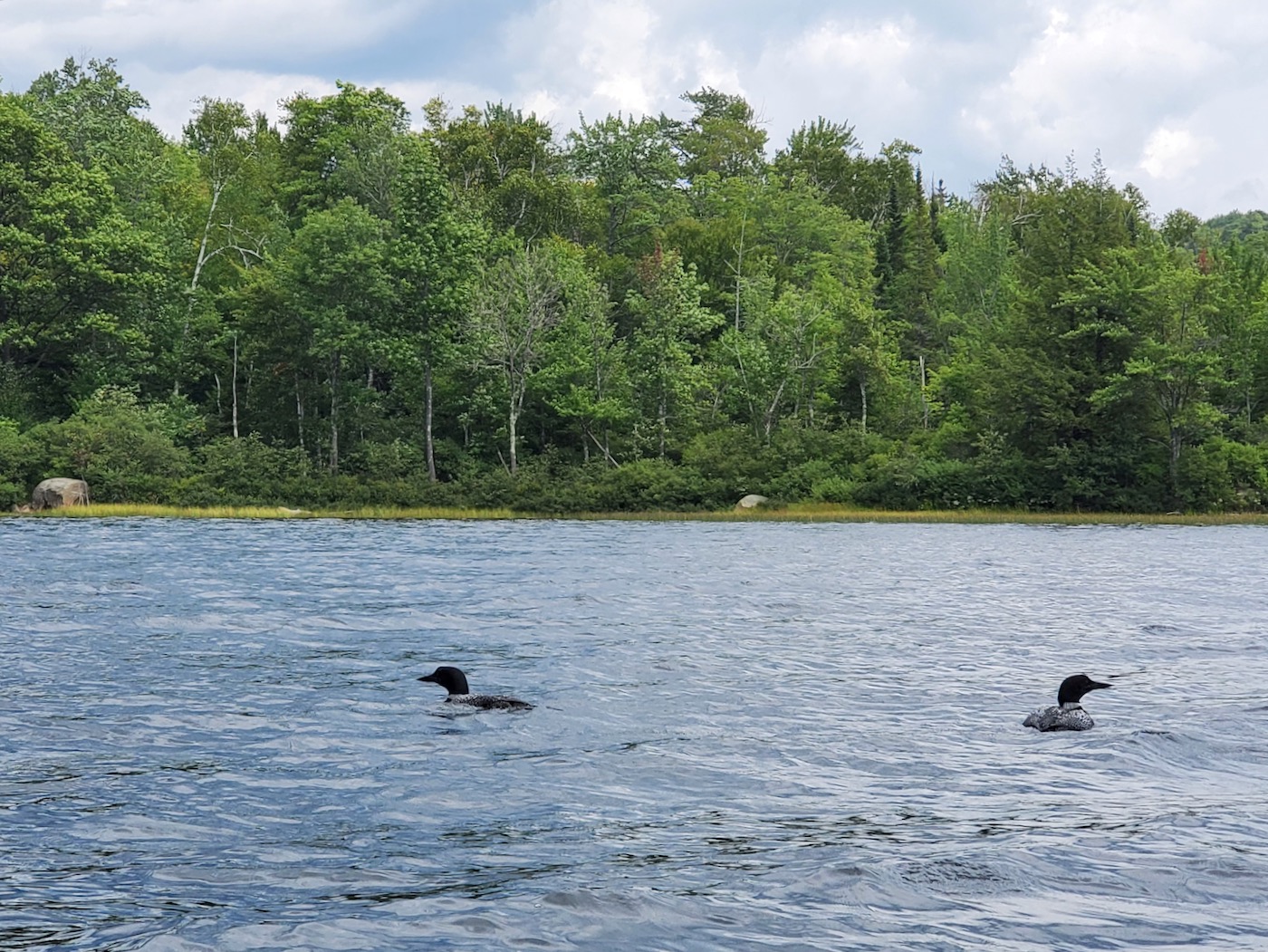 It was an odd feeling, back at the cabin in the dark, hanging out on the porch, looking up at the stars. We were happy and anxious at the same time. Our daughter was out in the woods, probably sleeping at that point, and didn’t seem the slightest bit concerned. Zelda and I weren’t sure we’d camp alone at age 14.

The next morning we slept in. The cabin windows were wide open, the was sun shining and there was a nice breeze was blowing. We laid in bed, enjoying the morning and listening for the crackle of the radio. We resisted the urge to walk out to the campsite.

At 10:30 our daughter arrived back in camp, smiling and asking questions about ski season.

9 comments on “A First Solo Adventure”