Willard emerges abruptly, erupting out of the flats as you approach on NY Route 40, a prominence amid the meandering farmlands 30 miles north of Albany. The suddenness of it is stunning, delivering the sort of skiing-where-no-skiing-should-be sensation common to approaches to the Midwest ski hills from my youth.

It’s a busy place. Even on a Friday and half an hour before the lifts opened, I followed a bunched line of cars edging along the network of narrow backroads accessing the ski area. In the lodge I waited in a line for my ticket, the first time since Hunter’s opening day. It’s also a friendly place, the woman at the counter thanking me profusely for “coming out and joining us” as she handed me a pair of sticky wicket tickets.

The crowds of cars and lines didn’t translate into liftlines. A pair of double chairs rise sharply from the parking lot, and for most of the day the queues sat empty. The vertical drop is 500 feet of true fall line, the Colonel Run charging angrily in a straight shot beneath the chairlifts. 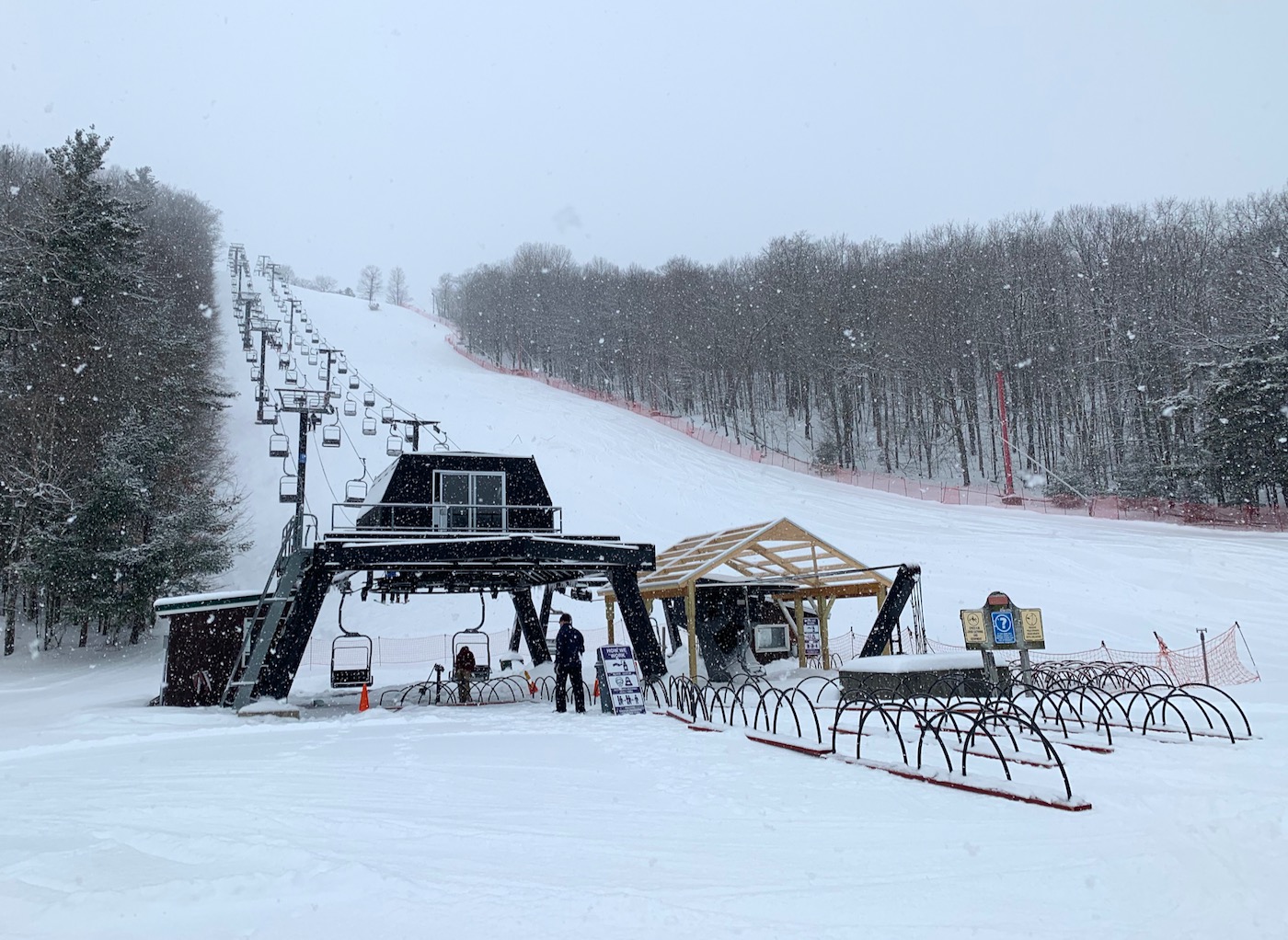 I skied while my daughter slept in the minivan, buried in coats and blankets. She’s 12 and on weekends she stays up all night and sleeps all morning, like I did at the same age. The 5am wake-up calls for skiing have become harder for her to manage. So when we ski she dresses the night before and I wake her right before we leave at 5:30 and she sleeps on the way north and she sleeps after we arrive and she sleeps while I ski.

At these smaller areas, it’s a perfect system: I can see the car from almost anywhere on the mountain and I can get to it in minutes. I spend an hour and a half exploring the mountain, and when she wakes up around 10:30 or 11, I know exactly where to take her. 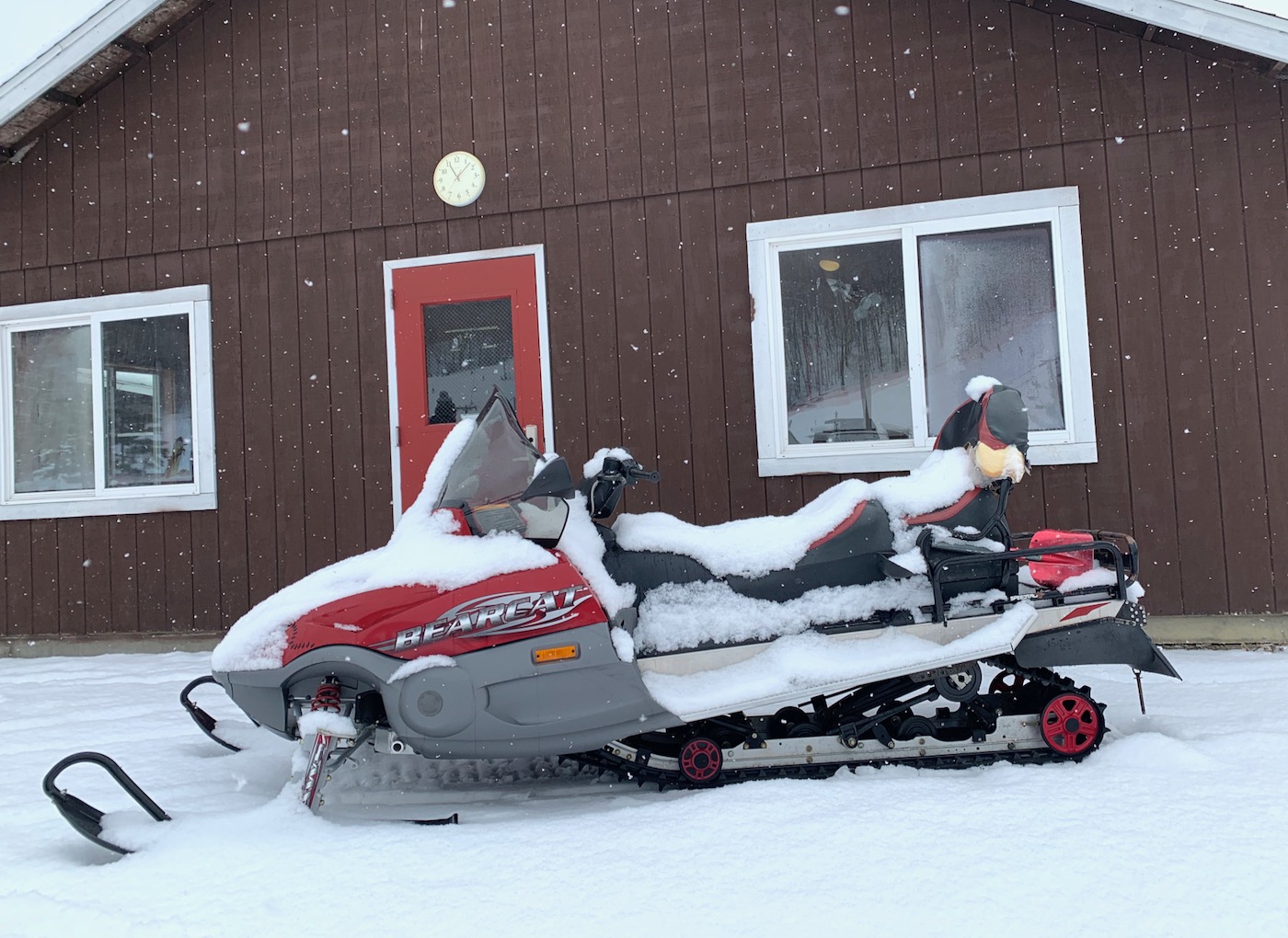 On this morning it had snowed all night and it was still snowing heavily as I angled straight for Upper Colonel. But the fresh snow hid a crust below. A line of freezing rain earlier in the week had paved the deep base that had accumulated at most upstate ski areas in the previous four or five weeks. Where the mountain had groomed, the fresh snow was manageable, but where they hadn’t groomed it was an exercise in deliberation and experimentation.

I spent half an hour exploring the black diamonds to skier’s right of the summit, a clutch of twisty and interesting runs, many of them blocked with tape. The snow was crusty beneath but deep and skiable with caution and patience. The mountain’s terrain is perfectly divided by ability, with the blues bunched skier’s left off the chairs and one green run looping down and around the mountain from the summit. 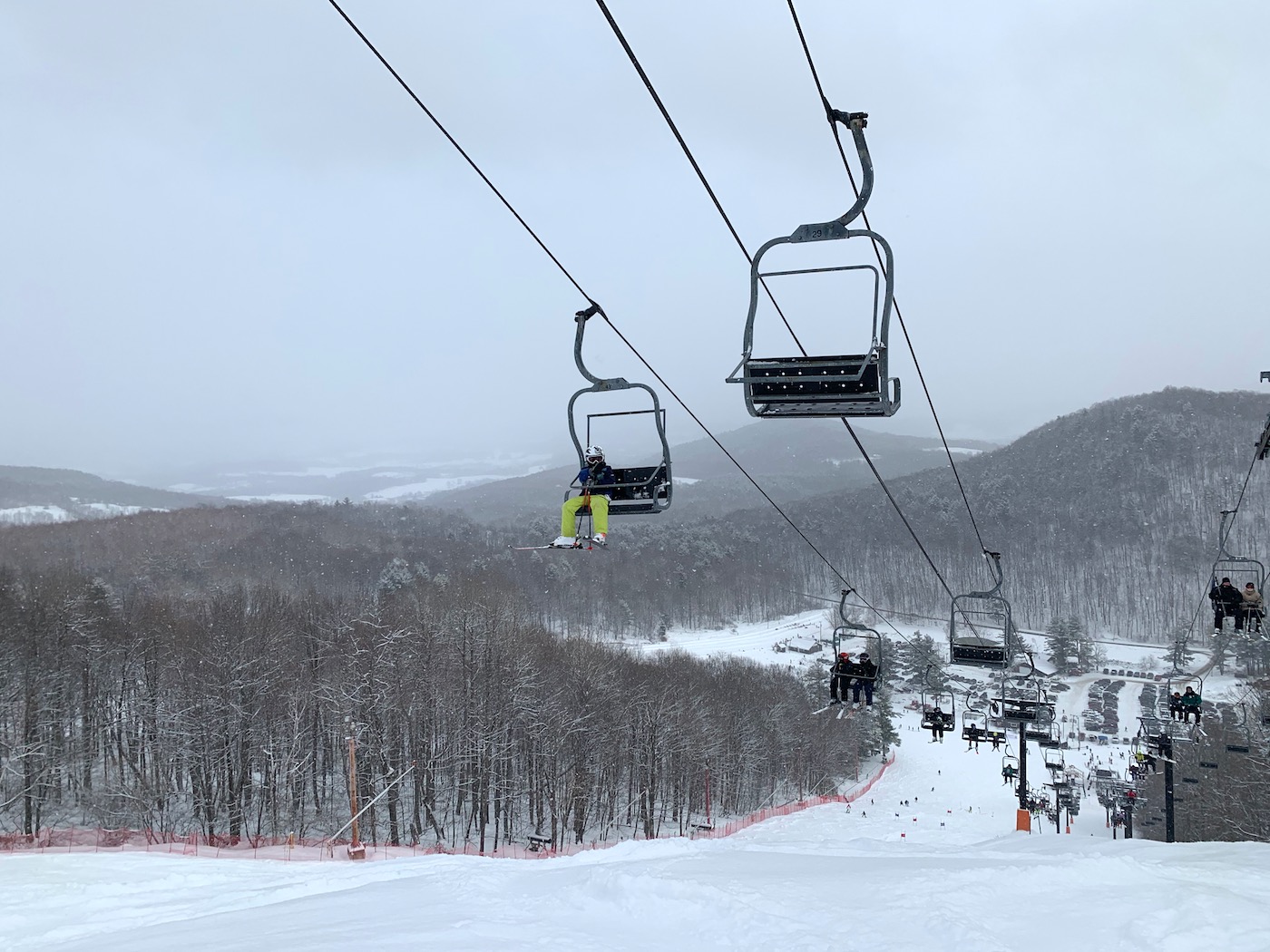 When my daughter joined me, we spent the rest of the day alternating between meandering green Bunny Hop and a narrow blue route called Billy O’Neil. Both funneled into Bear Path, a blue-graded glade that is really set on a mild green pitch, a wonderful widely spaced zone where Waverly could amble without fear.

Glades are too often reserved for freewheeling experts, set on impossible angles plunging through cliff-studded forests. More ski areas ought to thin these sorts of un-intimidating practice glades like this one at Willard, a place where kids or anyone developing their skills can grow comfortable with the practice of navigating trees.

Bunny Hop is a wonderful long run, tilting off the summit on a narrow lane that gives way to a broad bowl, where skiers accelerate down a long pitch and ride into infinity, a long stretch charging past the snowmaking pond and looping back around to the front side of the mountain. A meddlesome upslope disrupts this boulevard, a 100-yard stretch that is especially difficult for snowboarders.

The mountain itself is rough and interesting. Grooming is selective, flattening only the main routes down. The rest of the mountain is a medley of bumps and jumps that look as though they were constructed by 14-year-olds with snow shovels. Because of this impromptu terrain-park feel and because of the race programs built on the mountain’s steep front-side, the place is filled with bombers, kids swarming down the incline in huge packs and launching off every bump they can find. 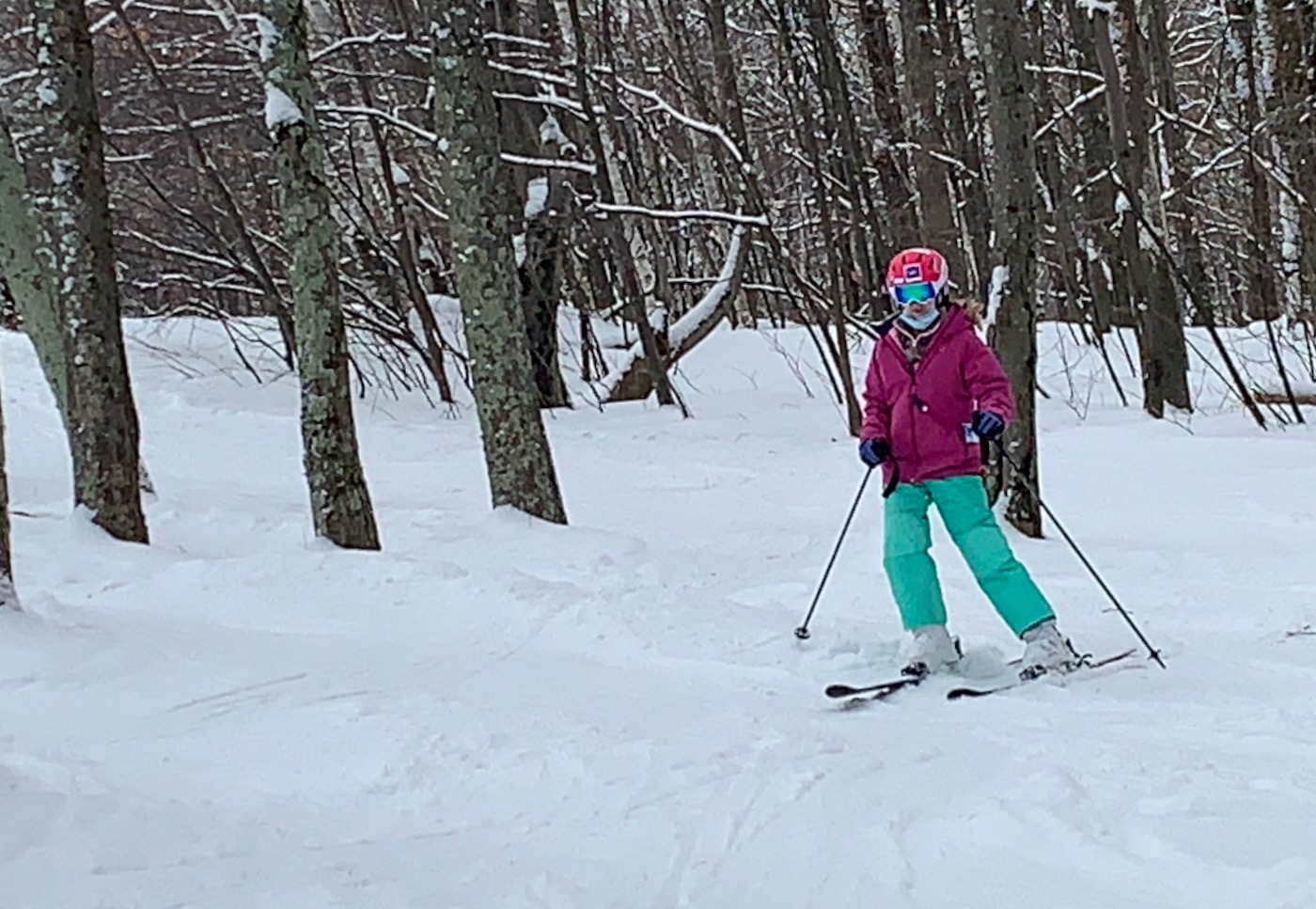 It is the perfect place for kids to ski and explore alone. Everything funnels back to the double chairs. The ski area is small and it skis small, the trailmap exaggerating what feels like half a dozen runs into 20 or so. Which is fine. Willard is a family ski area and small and navigable and that is what a family ski area should be.

The true payoff is at the top of the mountain. Willard has one of the great summits in New York skiing. The pair of doubles dump skiers out onto a tight circular plane that drops sharply into dramatic views of the rolling plateau far below, a white-frosted landscape of knolls and dormant farm fields and barns. A radio tower thrusts off the true summit looker’s left of the lifts. Tucked against this is an angular patrol shack, snow-dusted and weather-worn and cozy. 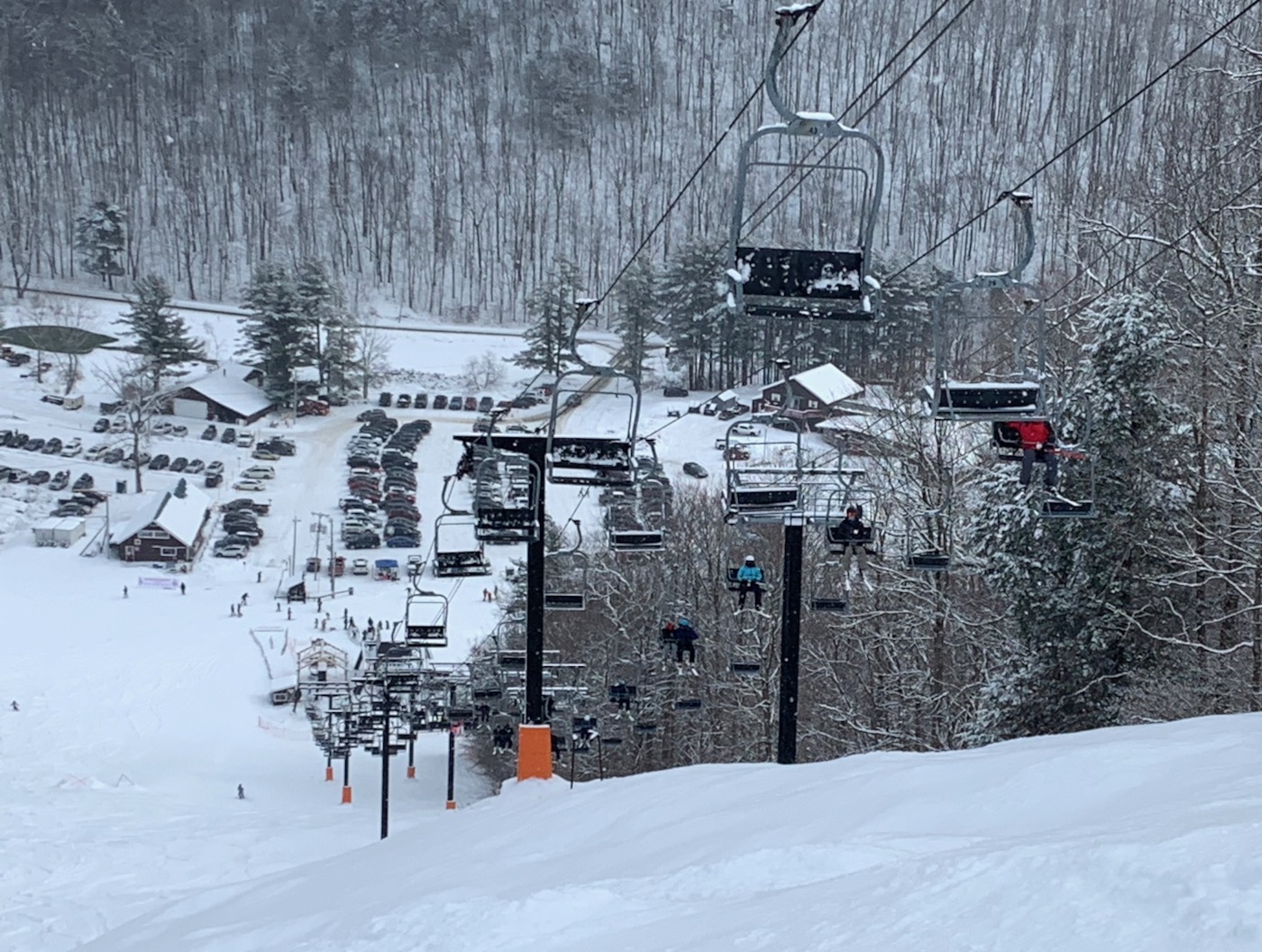 If you squint hard enough, you may be able to see Mount Snow, 30 miles east as the crow flies, the Epic Pass crowds cluttering its 80 trails and backing its liftlines out to the parking lot. They could have it. On a holiday weekday meandering down the mountain with my daughter, Willard had everything I needed.

14 comments on “Willard Mountain: Rising Up”