My first time skiing was at Garnet Hill Lodge in 1989. I had a friend with a ski shop who convinced me to give nordic skiing a try. We bought NNN skis, a complete set up, boots, poles and skis for $125. 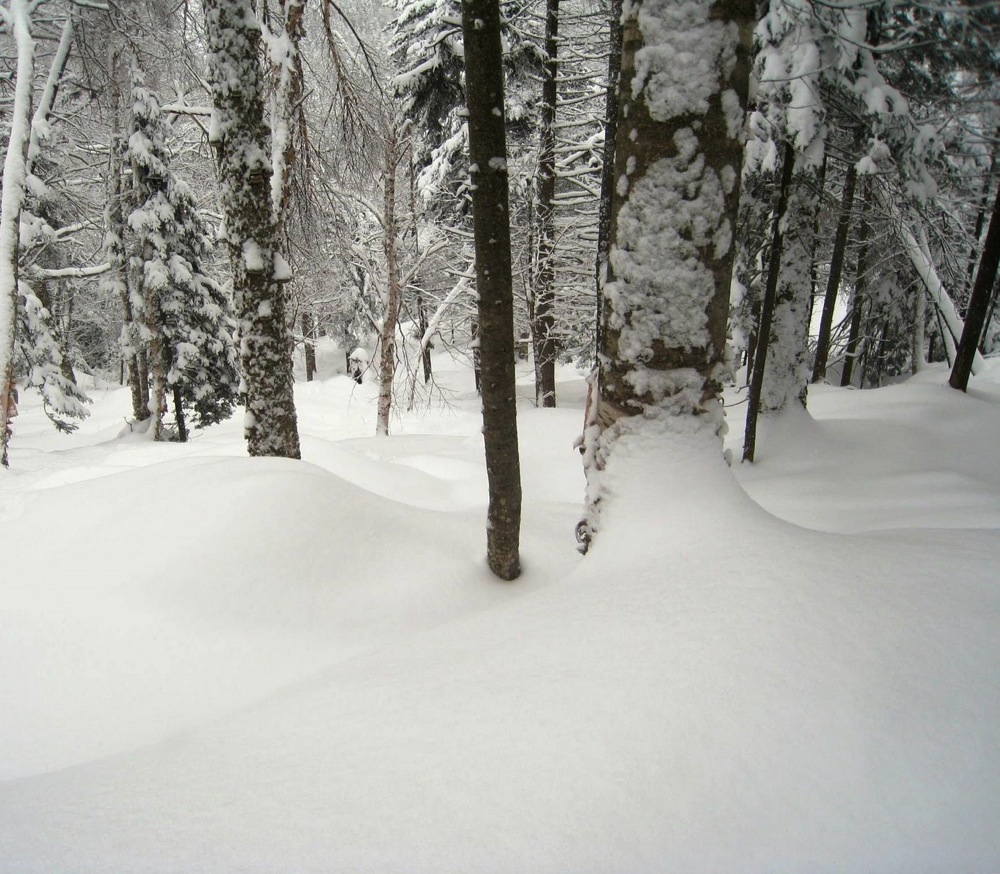 The first morning of our stay we skied from the lodge down to the ski shop via the Cut Off Trail. It’s pretty steep for a nordic trail with a 90-degree turn at the bottom of the steepest section. It was right after a rain/freeze and we were out before the groomer.

When I got to the corner, it wasn’t pretty. I spent a minute on the ground wondering what the hell I was doing.

We skied some easier terrain and it snowed later in the day and conditions got a lot better. Garnet Hill’s 55k trail network seemed limitless to me and I felt as if I was in the middle of nowhere.

I loved the feeling of pushing my skis through anything soft, but I still didn’t yet have “the bug” — that obsessive desire to maximize every winter and ski as much as I could. 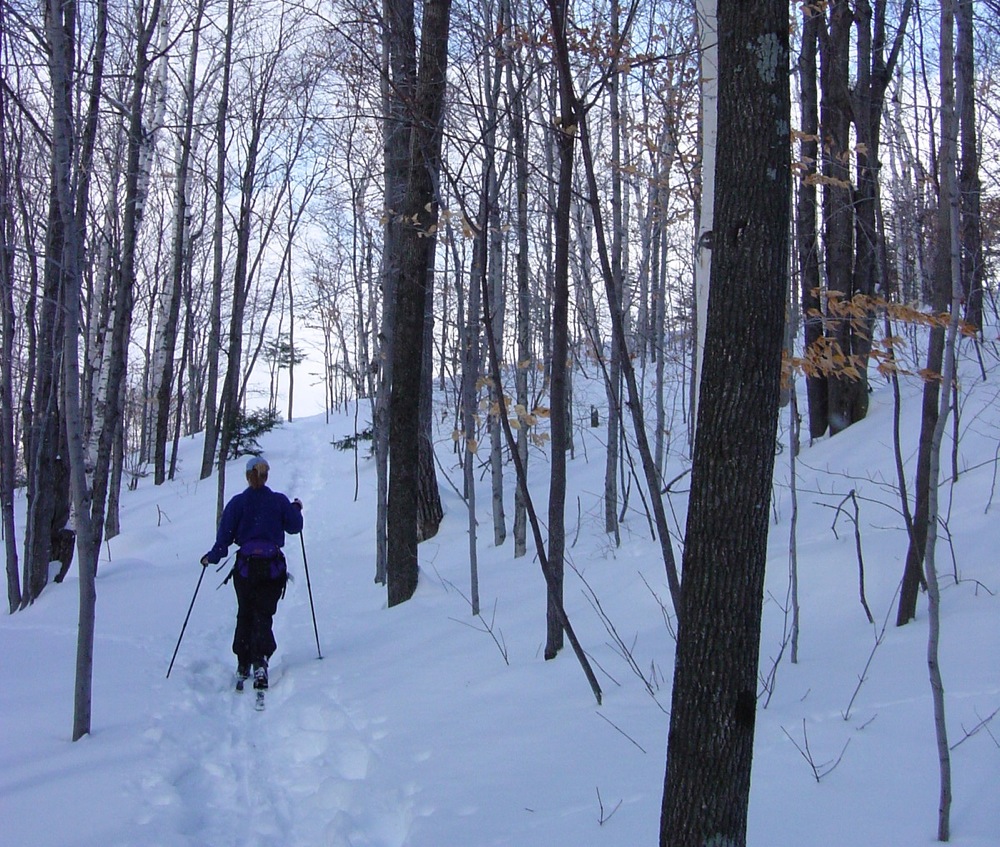 Over the next few years we’d return to Garnet Hill a few times a season. Eventually we knew the trail network and we started to look at the trail map a bit differently.

The back of the map had a big picture overview that included access to the Siamese Ponds Wilderness. Groomed trails in Garnet’s network were solid black lines and ungroomed trails on state land were dotted lines that ran off the edge of the map with notes like “to Puffer Pond.” These trails captured our imagination.

We started to ski into the woods, visiting nearby spots at the northern end of the wilderness, ill-equipped on our skinny skis.

Garnet Hill was our base for exploring the big woods. We’d plan our adventure, get first breakfast at the Lodge and often come back after dark, checking in at the ski shop and barely making dinner. 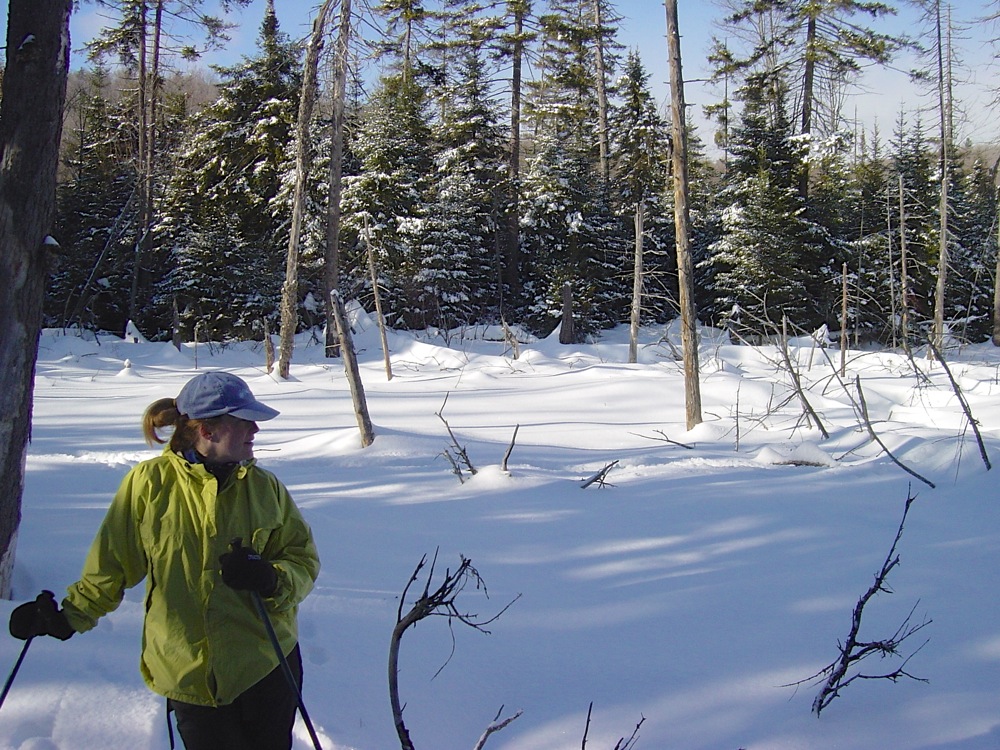 We gained a reputation for pushing the envelope. One time, on a day when the high temperature was five below, we skied to the Siamese Ponds breaking trail much of the way. When we arrived my friend Linda removed her skis for our lunch break. After lunch it seemed that whatever slush had accumulated inside her NNN binding froze and we couldn’t get her boots to click back in.

We were facing a very difficult situation: it was bitter cold and we were no longer moving, five miles from the trailhead in deep snow that postholed above your knees without skis. While we had the essentials for starting a fire I was concerned that too much heat applied to a plastic binding could melt parts, game-over.

Eventually, by holding the frozen ski binding up to my mouth, I blew enough warm air onto the binding to pop the boot into place while Linda waited in her socks, trying to keep her feet warm. 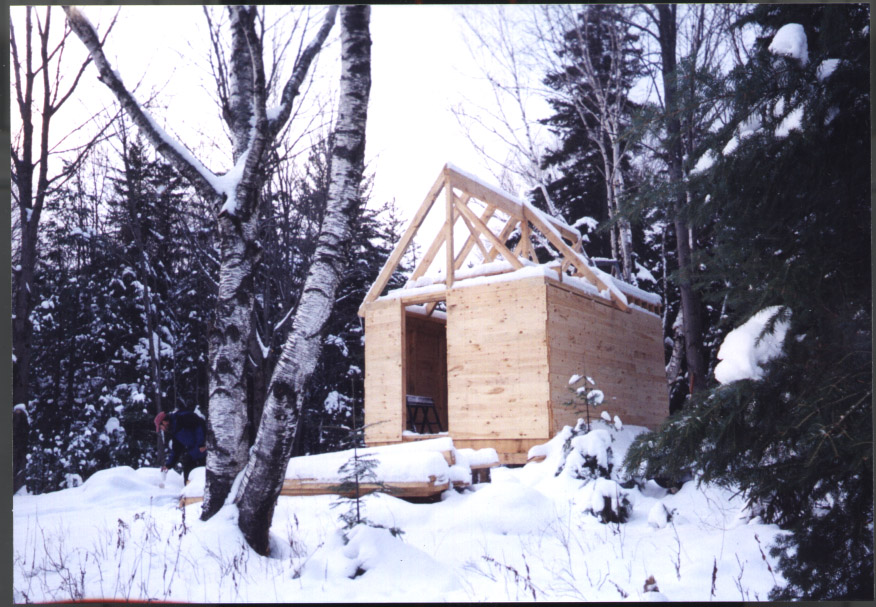 After that day, we bought proper BC gear: Asolo Snowfields, Rottefella Super Telemark bindings and Karhu XCDGTs.  A simple bomber system that couldn’t ice up in a place where you couldn’t chip it off. It makes all the difference.

I loved to break trail, skiing on natural snow. After a big snowfall there was at bit of a game that went on, with backcountry skiers who wanted to get out without doing too much of the heavy lifting. People would ask “did you see tracks on wilderness?” How far out did they go? I loved being first and people would ask me where we’d been to see if they could capitalize on my tracks.

More than once, George Heim, the owner of the Lodge asked me to help him lead the ski on Halfway Brook. Not my idea of fun, busting my butt with a large group skiers stepping on my tails waiting for me to inch forward. 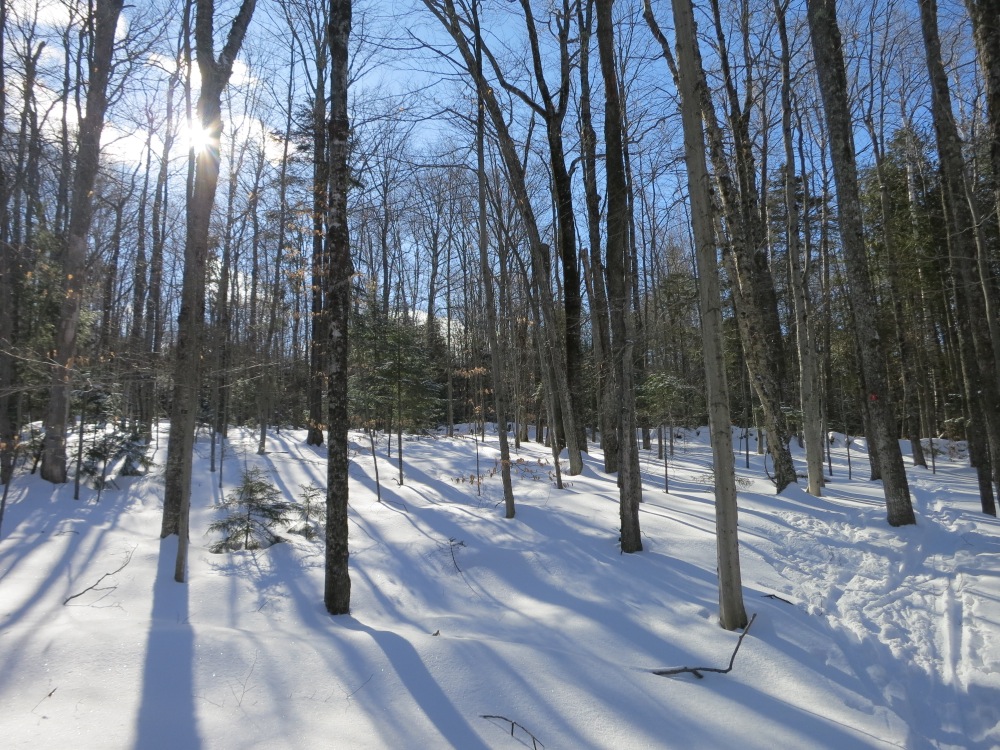 I wanted to be out in the woods, quietly struggling on my own or in the company of my closest buddies. I’d ski the trail from the other direction so I could enjoy solitude and breaking trail and both groups could share the benefit of each others tracks.

In the late 90s we pushed even farther, finding new routes bushwhacking and winter camping. In the summer we’d hike, looking for hunter’s paths to expand our backcountry highway system. By the time November would roll around we’d be jonesing to ski and often there was no natural snow at that time of the year.

In 1998 a month before my 40th birthday, I went to Gore Mountain with my leather boots and backcountry skis and rode my first lift, the original Adirondack Express.

I’d met my wife Zelda the year before. She introduced herself as someone who wanted to get outdoors in the winter. I was all in and shared my love of skiing with her. She’d never skied before but really loved being out in the woods.

One summer during a stay at Garnet Hill, it rained for three straight days. After hiking in the rain for two days, she convinced me to look at some real estate. I wasn’t serious about buying something and did it more for the entertainment.

But one piece of property caught my eye. It was at high elevation, in a prime location by my thinking and it was pretty cheap and I bought it.  We didn’t really use the land much except that I’d camp on it when I wanted to ski cheap.

In 2002 we built our cabin, in part, because a friend was starting a construction business and needed work.  In my mind’s eye the structure started as a leanto, then we imagined, and added screens, windows and a woodstove to the plan. Eventually our cabin emerged. 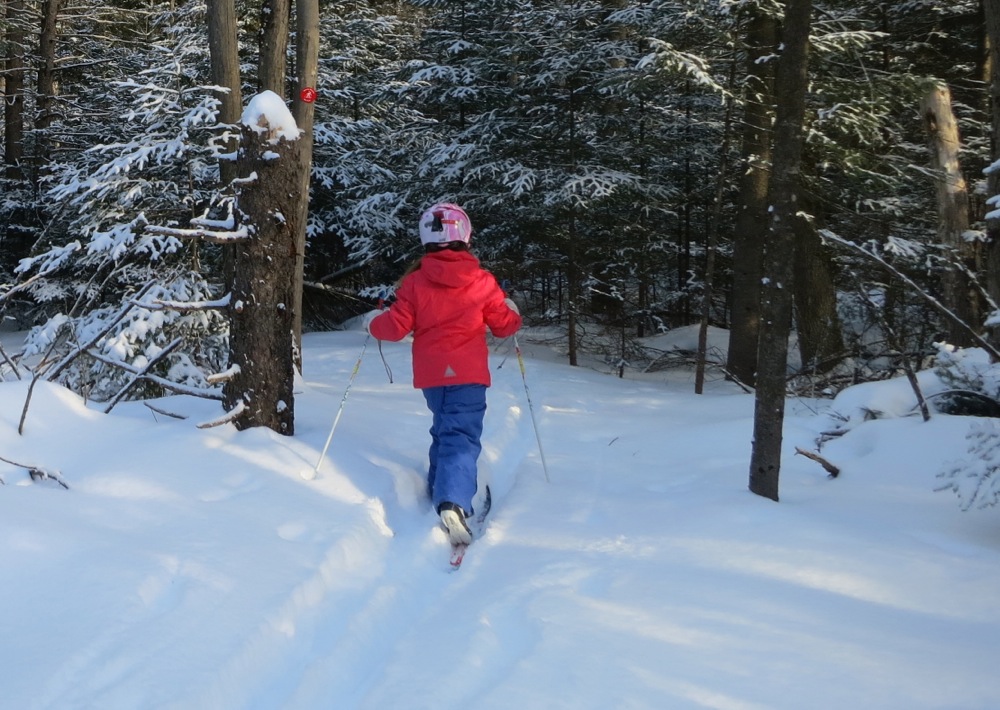 In 2006 our daughter was born and it changed our approach to skiing. Gore Mountain is one of the few mountains that I know of that will take a child at six months of age.

We took it as a sign: on opening day of the 2006-07 season, Neve was exactly six months old. We started into a period where we rode lifts almost exclusively, taking advantage of quality inexpensive daycare and eventually, ski school.

But pendulums swing in both directions. The guy who loves to break trail and enjoy the softness of natural snow and the solitude of the woods isn’t gone, he just spent some time skiing in machine groomed tracks. Now we’re developing trails out our back door in the hope that eventually we can teach our daughter to love skiing in our woods and the garnet hill sidecountry.