After inspecting the base area and touring the lower mountain with David Tomberlin, I finally connected with local legend Cliff Levers. Originally from Tupper Lake, Cliff has worked in oil fields, as an ironworker, and as an electrician. He came back to Tupper Lake in 2002, and has been there steadily since. 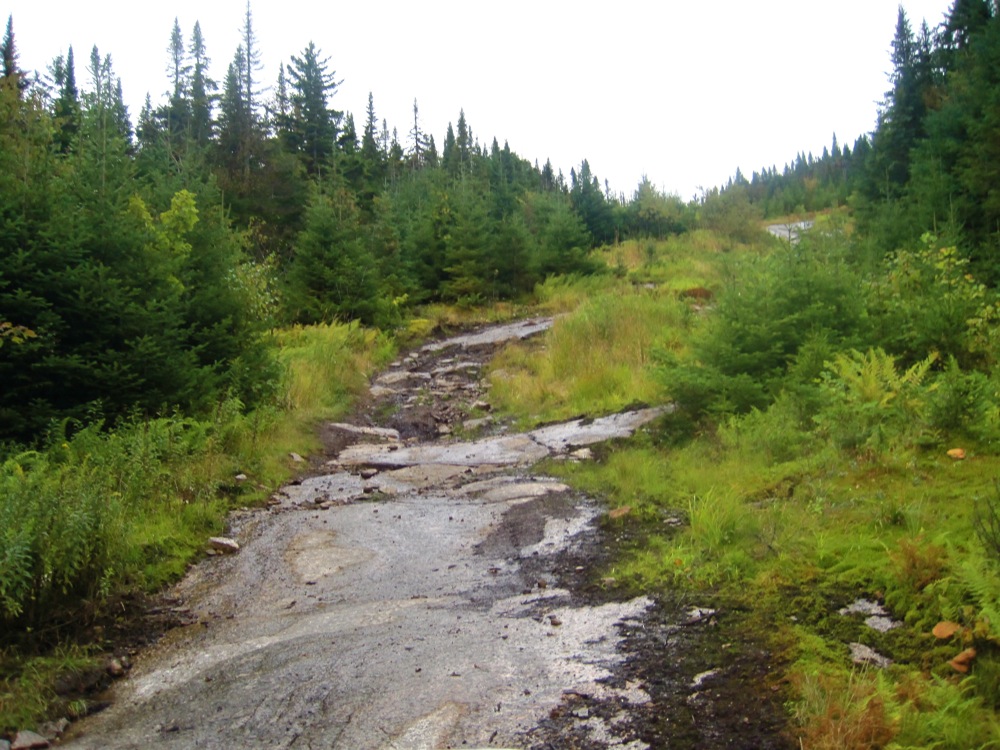 Cliff was understandably very focused on reaching the top of Lift 3 and the 3136-foot summit, as was I. Up we went. The road was steep and slick. At times, Cliff would stand up on the ATV. I assumed he was trying to get more weight on the front wheels, so, when ever he stood up — I threw all my weight forward into the space he’d vacated.

We were going over bedrock with some loose soil and rock. Several times, I was sure our wheels would slip on the wet surfaces, but we never did. Business as usual for Cliff, but my pulse was elevated. 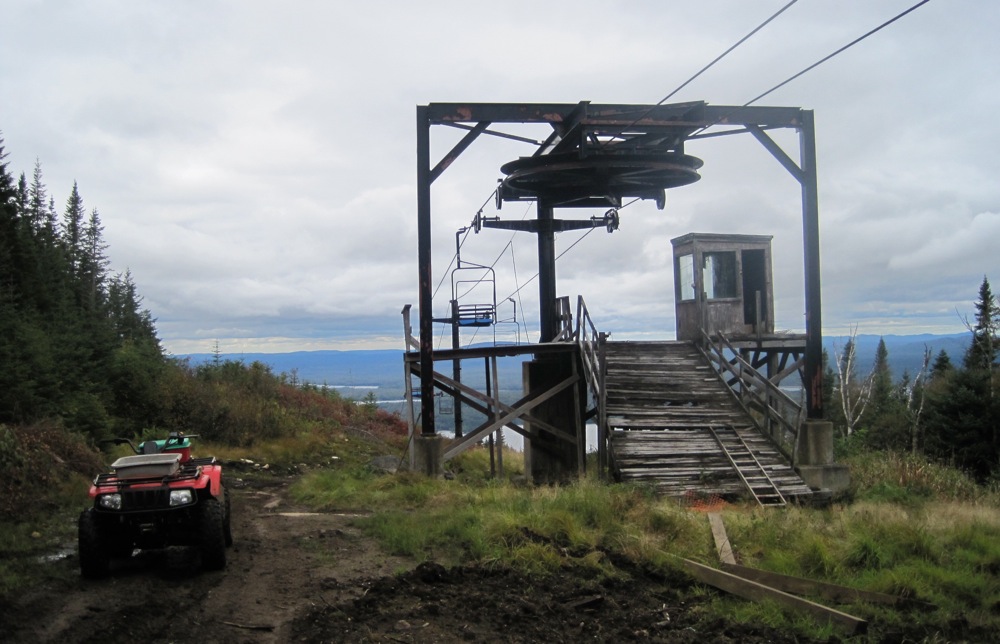 On the way up to the summit we stopped at the top of Lift 3: Cliff’s baby. For now, it’s the lift that brings Big Tupper’s expert terrain back online. Upon close examination of the Lift 3 unloading station, you could see that all the wood is shot; but the steel and the concrete are really in excellent shape. There are plans to replace all of the wood, with a combination of masonry and new wood. From top to bottom, Lift 3 is in the best shape of all of the lifts on Mount Morris. 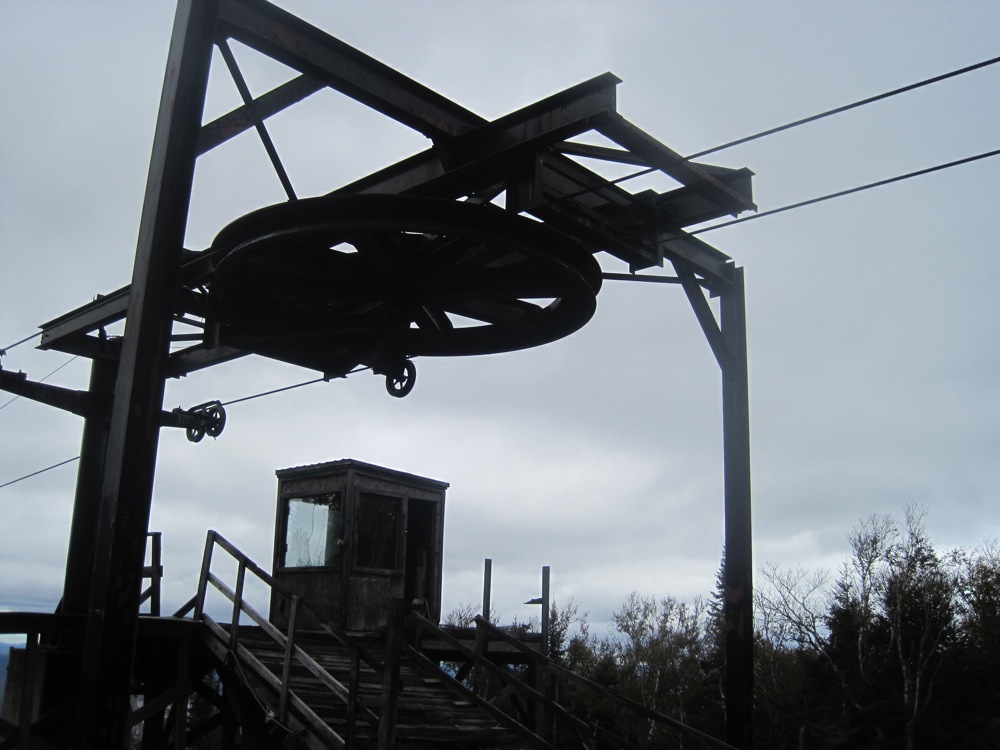 The bullwheel was impressive. There is one functional issue with the lift that is being resolved. There’s a 13-ton cement block that keeps the liftline tight under varying loads. Over time, cable stretch reduces the ability of the counter weight to adjust the tension. While it’s routine maintenance for this type of lift, it’s still a big job. The weight has to be raised, and slack taken out of the lines. 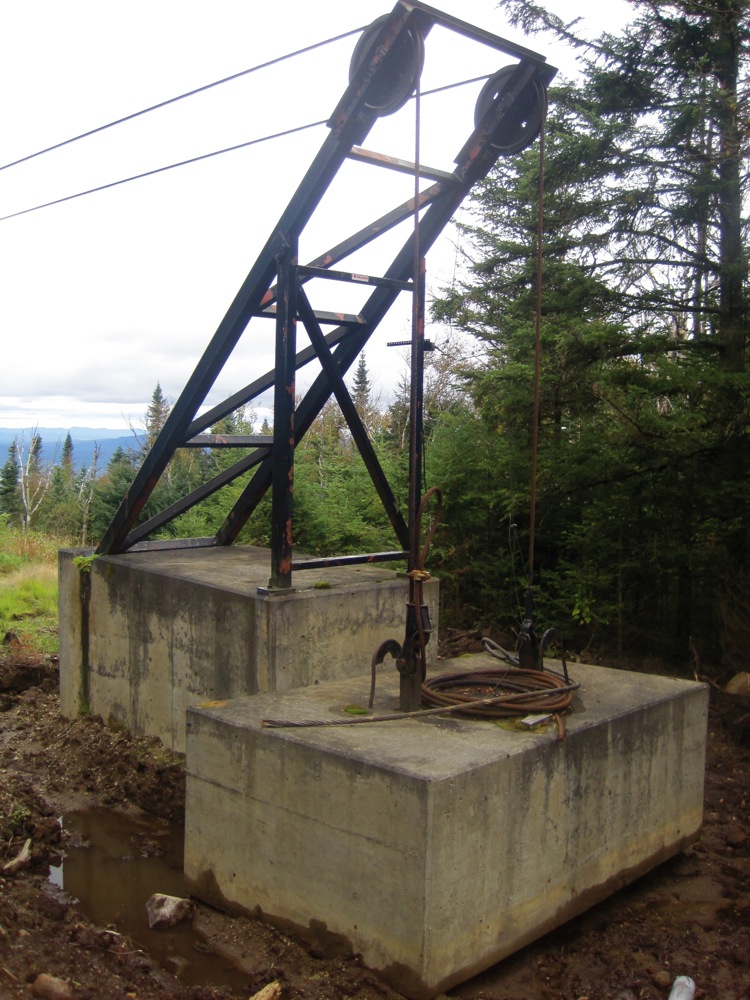 We got to the top. The views from the summit were beautiful. The summit itself was not. It’s a massive collection of communications equipment that luckily, you can see very little of it from the rest of the mountain. And honestly, it’s not hard to see how that spot would be used for that purpose when you look at the economy of Tupper Lake. 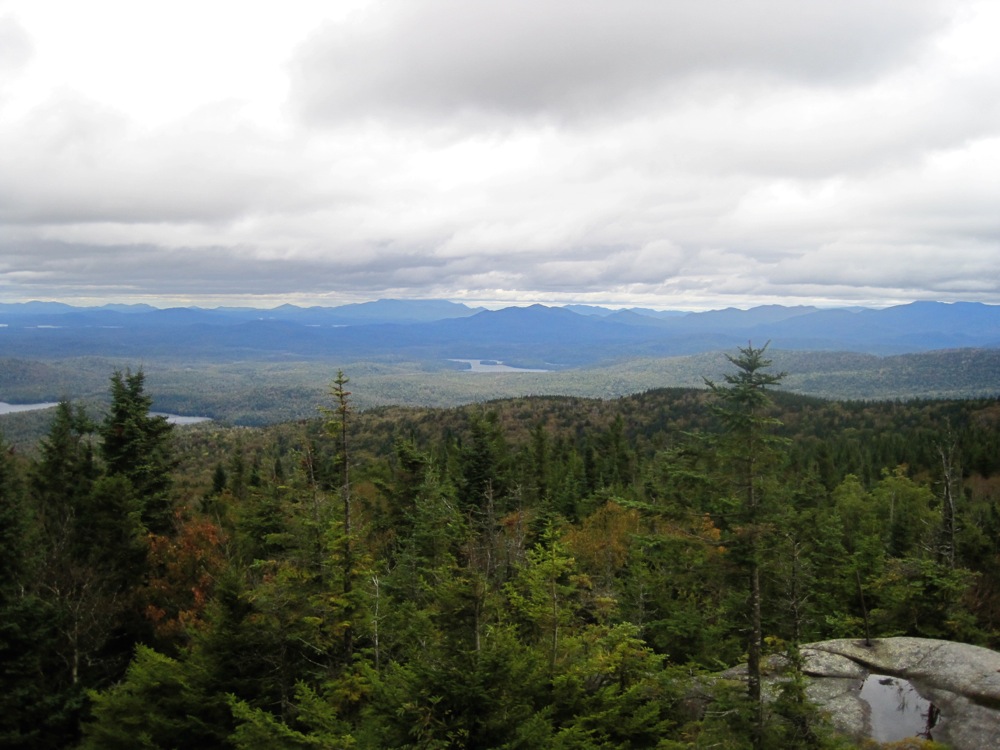 Coming back down, the views were stunning, on such an gray day.

Cliff pulled up at the top of Lift 1. Even though it’s not running or part of the operation plans for this year, he’s very fond of it. He uses it for parts and calls it the “Peter Lift.” Cliff has spent the summer robbing Peter to pay Paul, with the part of Paul played by Lifts 2 and 3. 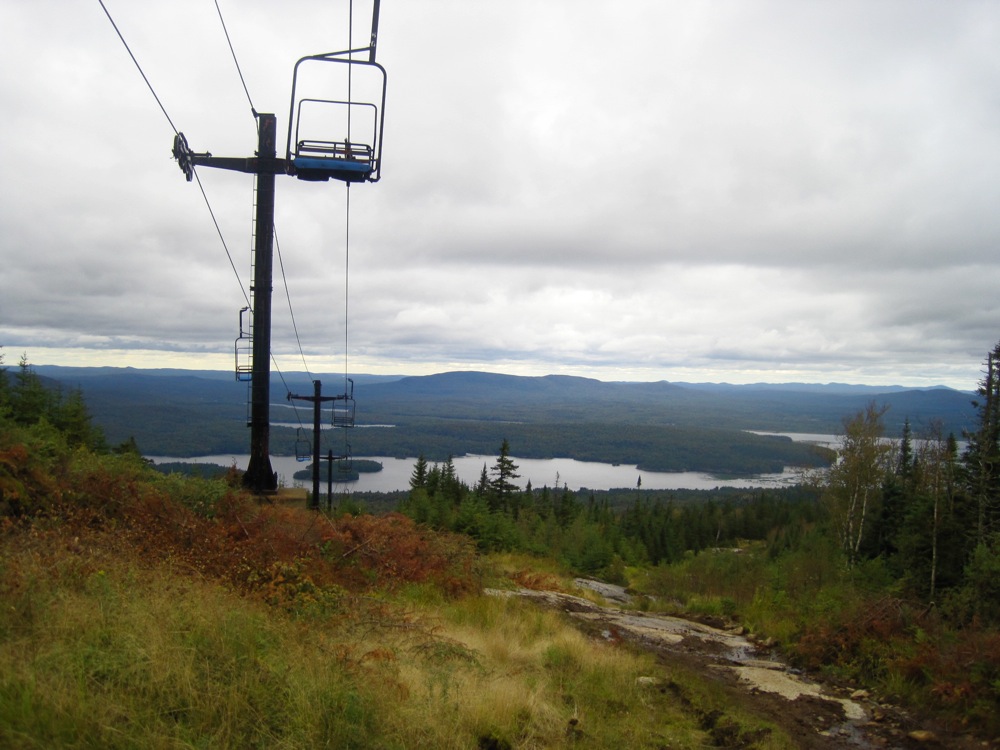 On our descent, Cliff told me the story of the cabin on The Ranger Trail. Originally, it was called the “observers” cabin because the fire rangers were called observers. 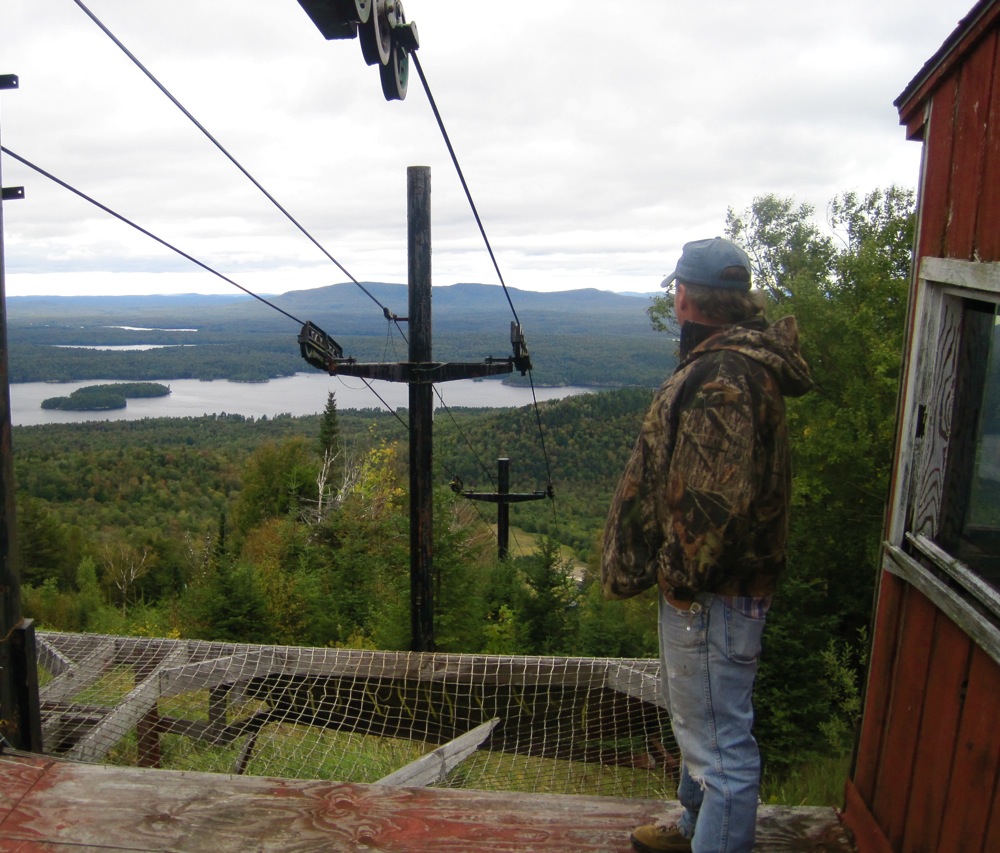 On the morning of June 20, 1944, observer Adelard Fromaget was climbing Mt. Morris to the tower with his son Joseph. When they reached the cabin, Joseph was tired and Adelard told his son to wait inside. The boy wandered off and was missing for 12 days, until he was found, over a mile from the cabin. A small white cross will be placed on the cabin to commemorate Joseph’s passing. 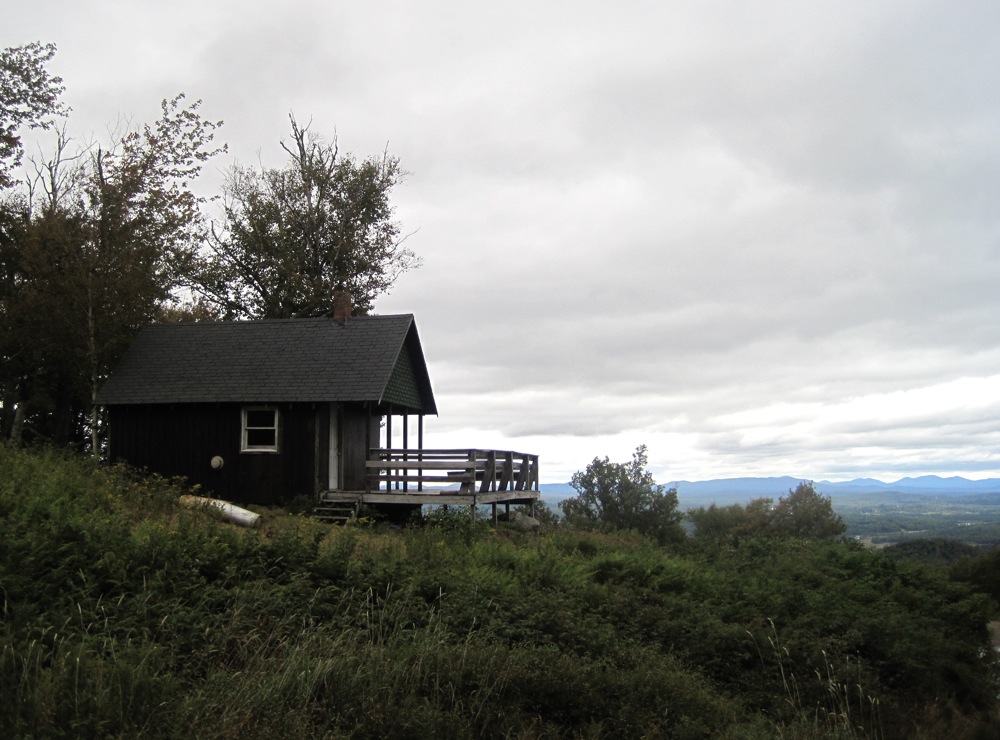 When you visit this hill, it’s easy to see why it’s so well loved. It’s got history, character and terrain quirks that remind me of Gore in some ways.  But it’s gut check time for Big Tupper — there are no guarantees that the ski hill will survive. I’d recommend you ski Big Tupper this year.