One of the things I like about the Hudson Valley is that almost any place you go has hosted a semi-significant event or character from America’s history. On the 4th of July, I picked a body of water with a storied past for kayaking: Rondout Creek. 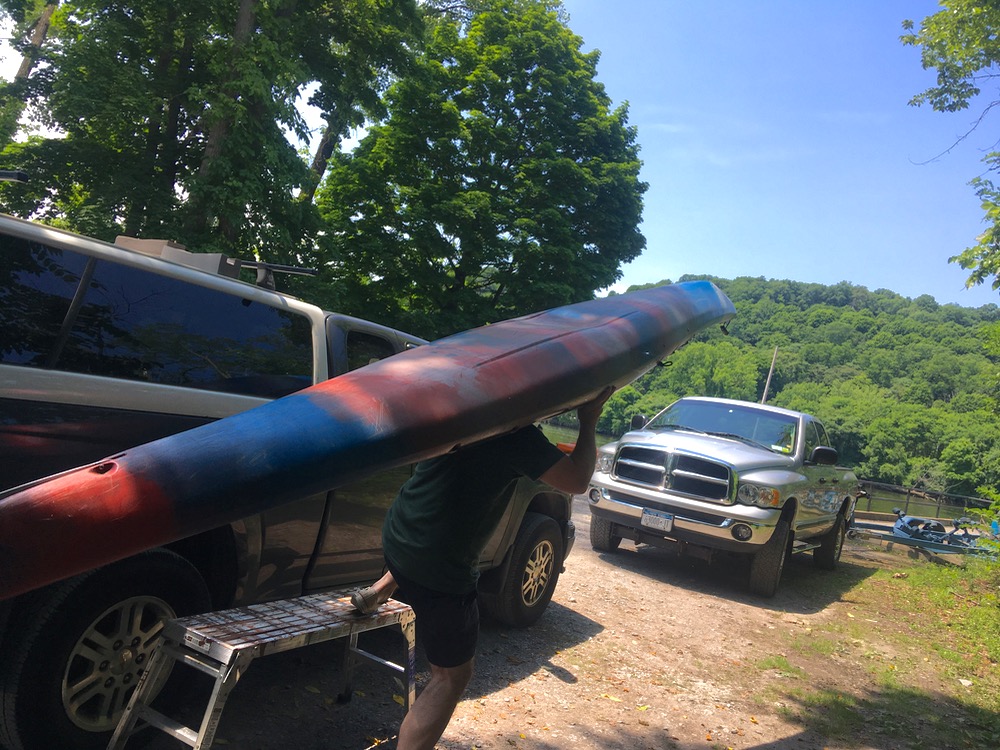 We drove up the Thruway to exit 18, turned east to connect with route 9W and headed north into the town of Esopus. Getting off 9W, each turn leads to progressively narrower roads until you find the Rondout Creek boat launch, a narrow concrete put-in with an aluminum dock next to it.

I pulled up close to unload the kayaks, then tucked my truck between somebody’s boat trailer and the surrounding brush. Once our boats were situated, I pushed Junior out into the water, then launched myself. 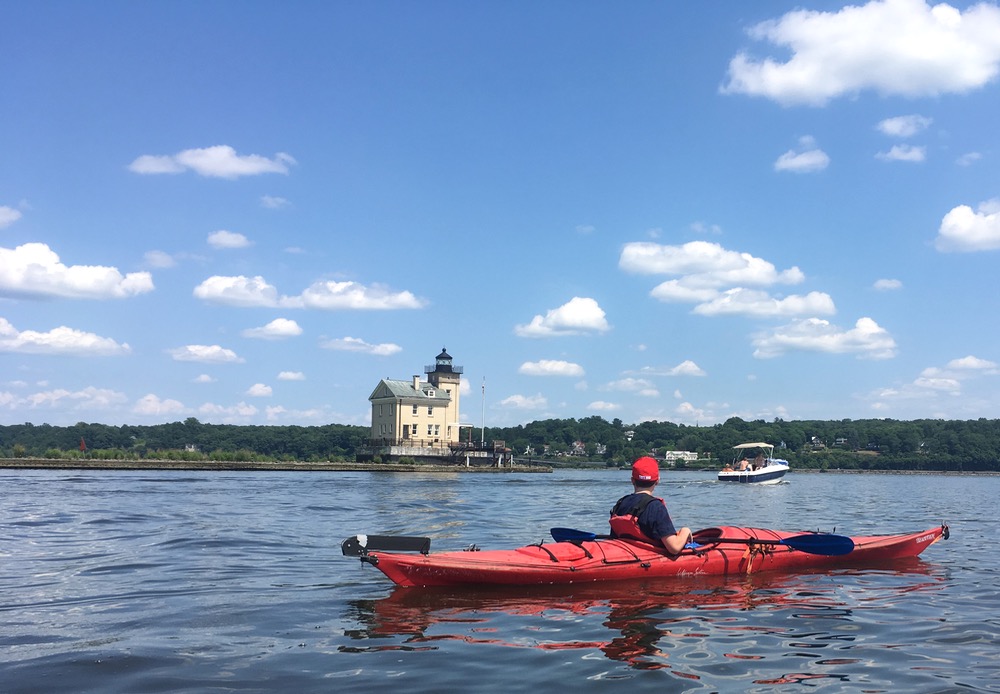 Downtown Kingston was just upstream but we turned and paddled down toward the Hudson River instead. I advised Junior to stick close to me and offered some unsolicited advice on paddling technique. We stayed near the south shore so as not to get in the way of power boats and jet skis making their way towards the mouth of the creek.

The first thing we saw was the hulk of a decrepit old ship tied up on the other side of the creek, a reminder that the Rondout wasn’t always all about fun. It was once an important commercial route. 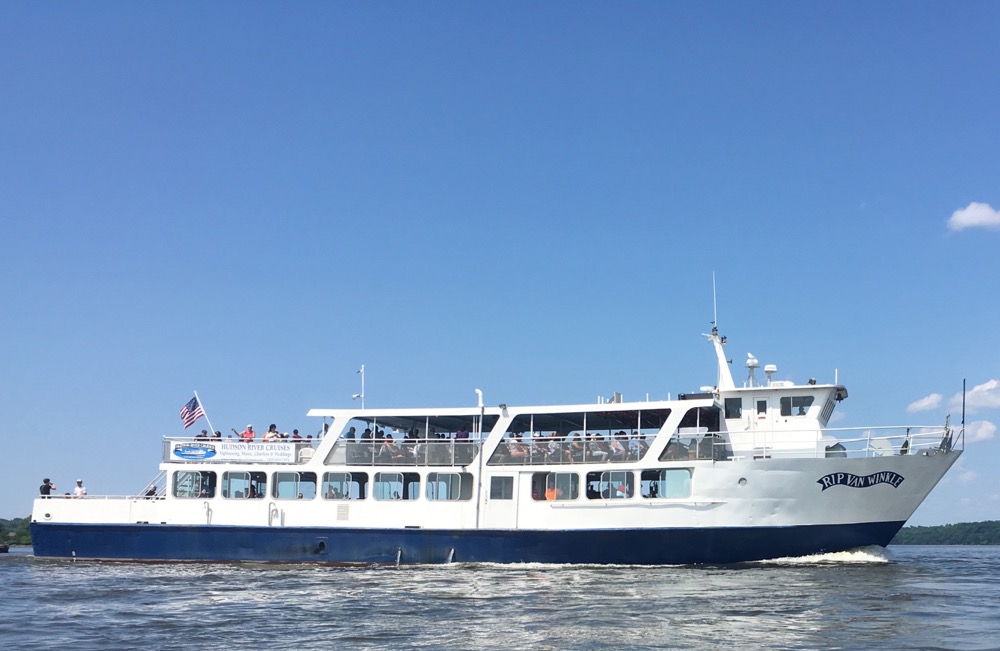 Even the Rondout’s name implies it’s long history. It’s a Dutch word for “fort”. The Dutch had put a trading post at the confluence of the Rondout Creek and the Hudson River as early as 1614. This spot remained an important trading hub for many years and in 1777, while the British occupied New York City, Kingston became the first capital of the newly established New York State.

The nineteenth century was a good time for Kingston. Quarries, brick factories and the ice industry, amongst other things, kept people busy. In 1828 the D&H canal opened for business. It connected the Hudson and Delaware rivers, via the Rondout, further cementing the waterway’s role in New York history. The upper Rondout was eventually dammed to create the Rondout reservoir and connected to NYC’s other Catskills water sources by an aqueduct. 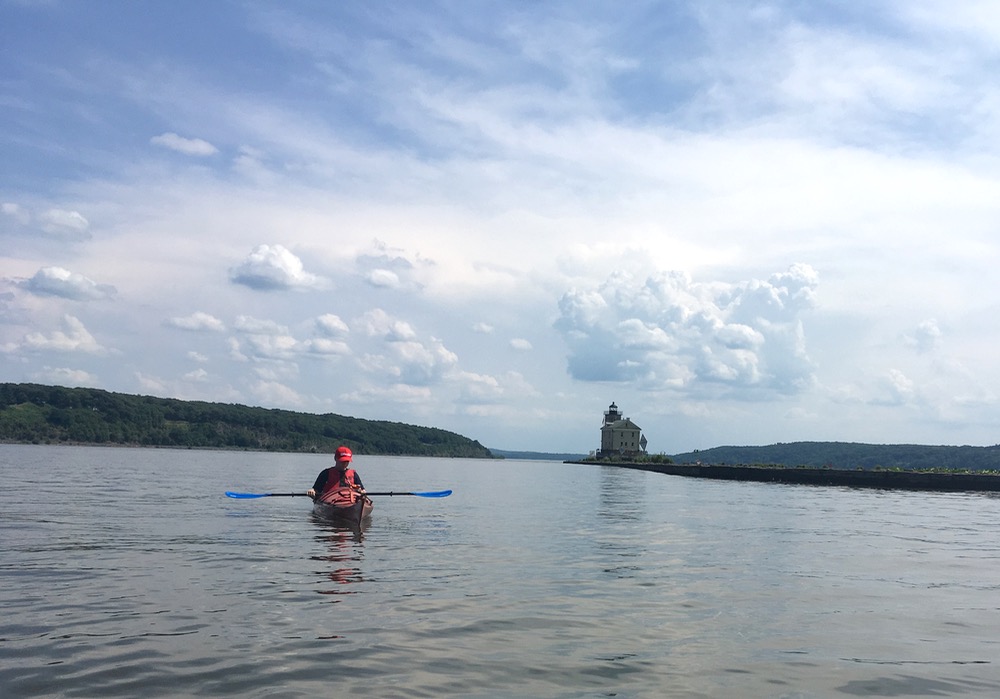 Today, in addition to providing drinking water to the city, the Rondout provides a great venue for recreation. The lower portion from the Hudson River up to the remains of the D&H canal’s first dam — a point called creek-locks — is lined in many places with marinas and private docks. An area once dominated by tugboats and coal barges provides a home for a wide variety of pleasure craft, large and small, and at least one float plane.

There’s more good paddling above creek-locks. It’s a lot less crowded too. When I paddled there last year, my only company was a couple beavers, some kids swimming near the put-in and a bald eagle. 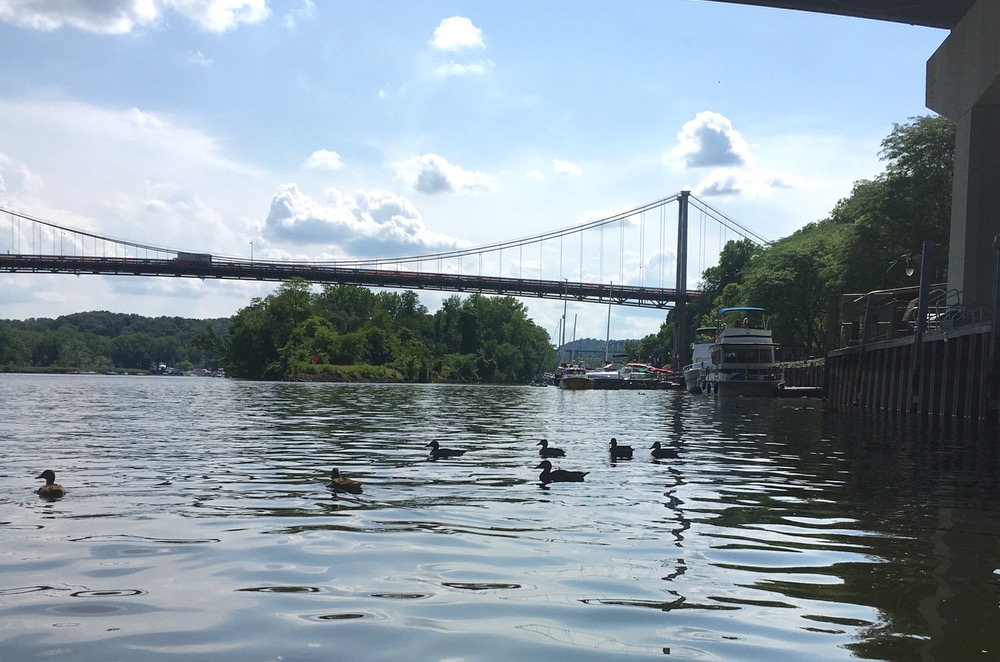 Summer weekends on the lower Rondout can be quite the party scene with people hanging out on their sailboats and yachts, doing the kind of stuff folks do on yachts. But that’s not why we were there. I was looking to enjoy a short paddle and maybe soak up a little history in the process.

Past the ship hulk, on our side we found more evidence of the Rondout’s industrial history, the remains of a long ago abandoned wooden ship, slowly disintegrating in a marshy area. At the confluence with the Hudson, a more pleasant bit of history beckoned from the north side of the creek, the Rondout light house, constructed in 1915 to replace an earlier structure. I pointed it out to junior who acknowledged that it was cool. 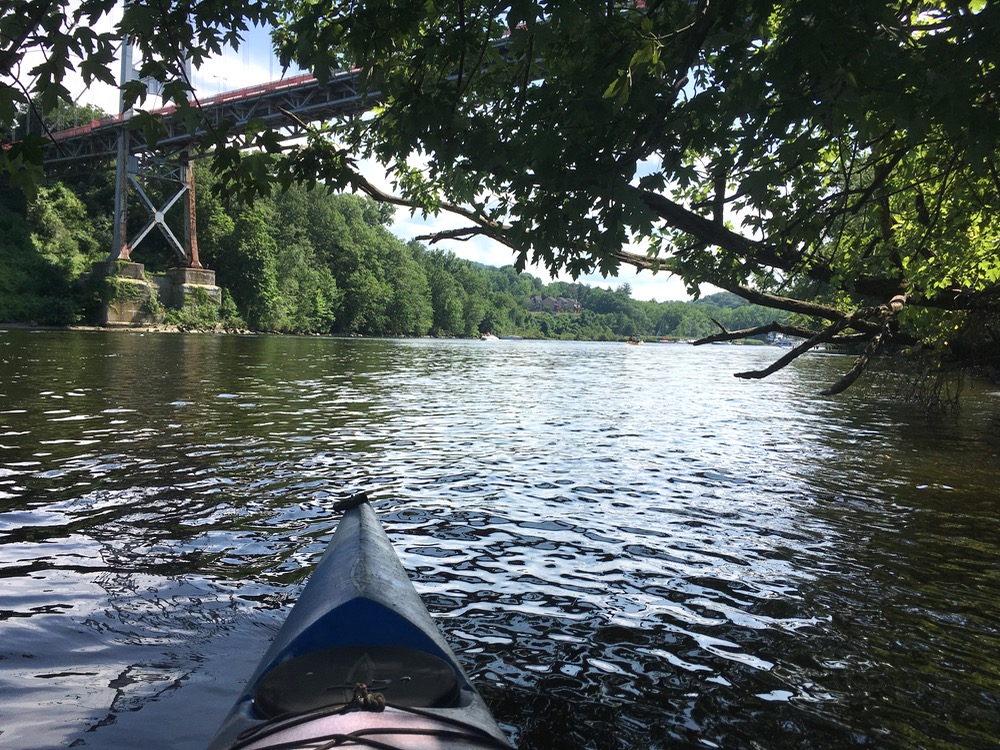 We pushed out into the Hudson and paddled south. After a little wake-surfing went wrong and junior swamped his cockpit, I taught him how a bilge pump works. We traversed the mouth of the creek to explore the Kingston side. We had to pause to let the Rip Van Winkle, a big river tour boat, make its way out into the Hudson.

Soon we re-entered the Rondout and paddled along Kingston’s waterfront, a neighborhood called the Rondout-West Strand Historic District. There’s a lot to look at here. Museums and restaurants line the shore, butting up against the docks and various old boats and ships, some restored, some not. As part of the July 4th festivities, there was a live band performing in a riverfront Park. Lots of folks were hanging out on their boats, listening to the music. One couple listen from two tubes, floating next to their sail boat. 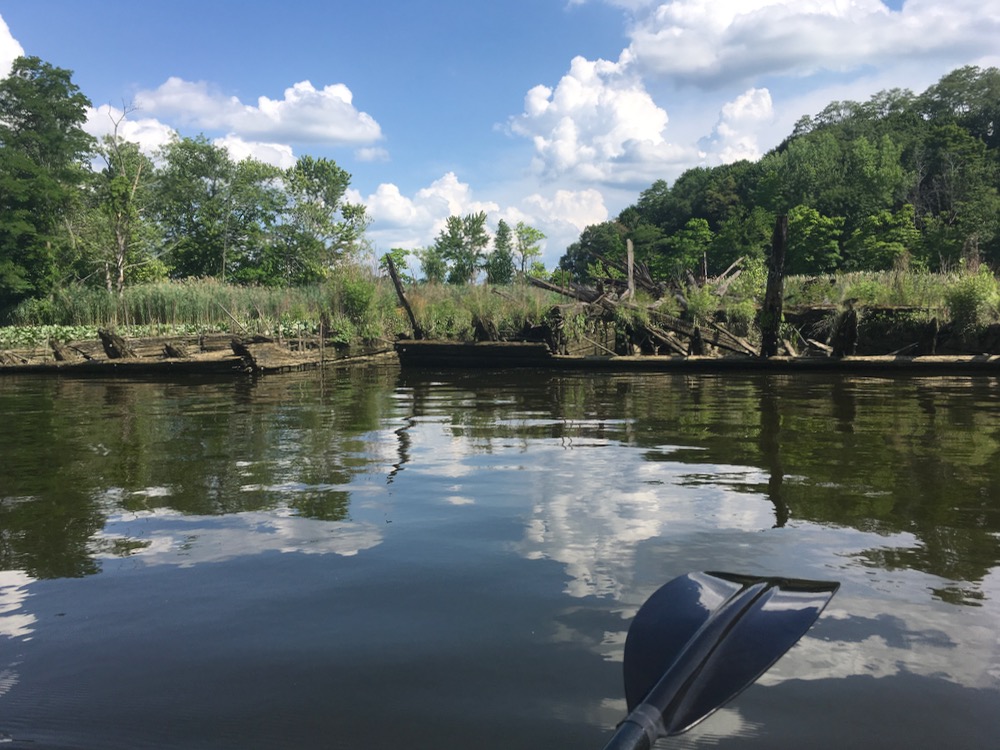 I had hoped to paddle all the way up to creek-locks, as I had in the past, to show Junior evidence of the old canal but he was having none of it. Just past the downtown area he cried uncle. His arms were shot. I showed him again how to paddle with straighter arms in order to use his shoulder and torso muscles more. I encouraged him to reach further forward with his paddle for a more efficient stroke but to no avail. Maybe next time.

I agreed to head back. On our way past Kingston’s waterfront, I heard the band doing a decent cover of Ricky Martin’s “Livin’ La Vida Loca.” We got to the boat ramp, having spent two hours on the water, got the boats back on top of my truck and threw our paddles and life jackets in the back. I put on a dry shirt and we hit the road for the trip home, stopping at a farm stand we’d spotted on our way there for some fresh fruit and a pie.

10 comments on “Rondout Creek: Paddle Back in Time”