This year my wife and I moved back east from Colorado. While I lived in Gunnison, I’d wake up early before work a few days a week and skin 2000 vertical feet before sunrise to ski, sometimes with a headlamp. This winter, back in Pennsylvania, I started skinning a small ski hill that is only 15 minutes from my house — Spring Mountain — to get my exercise and ski fix. 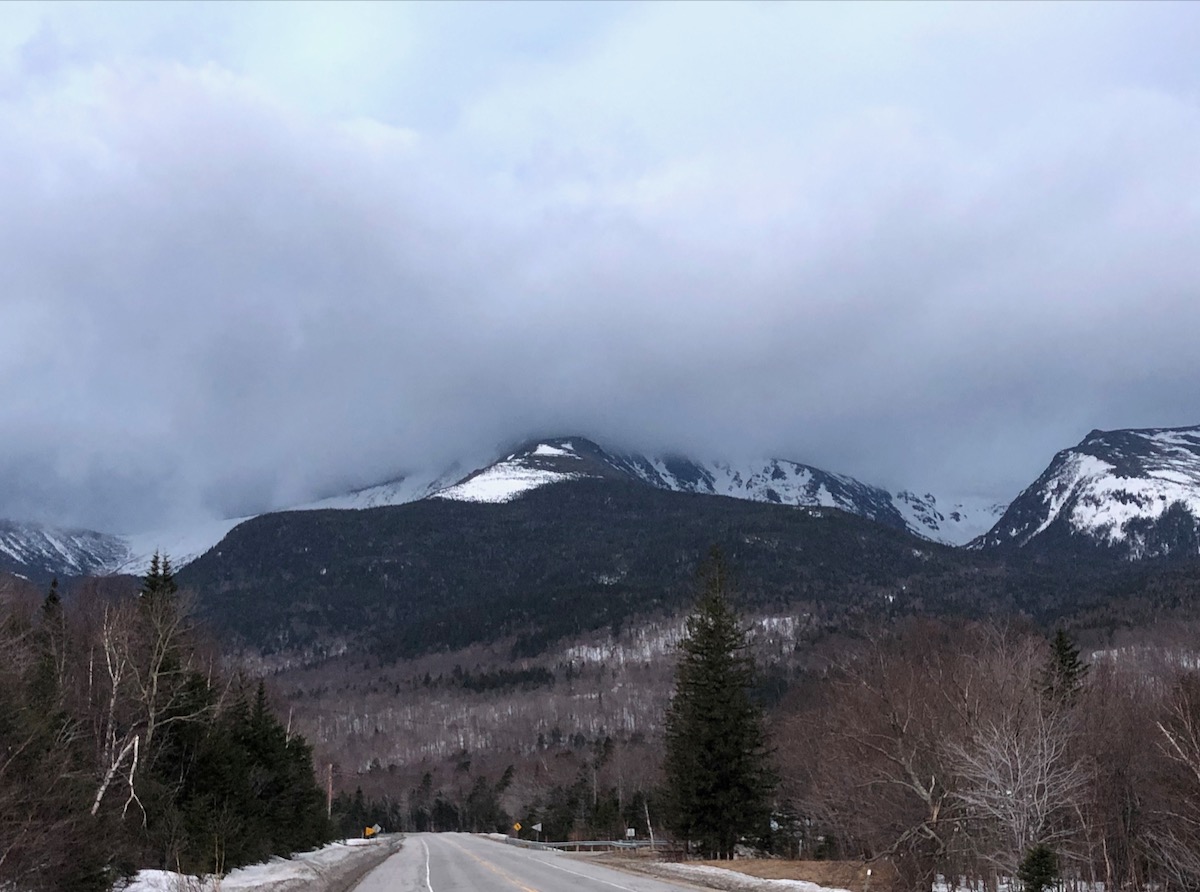 Getting to Mount Washington was at the top of my list this spring. I hadn’t skied in the Whites since moving west and I was eager to get back. My plan was to arrive midday on Good Friday in hopes of getting a spot in one of the shelters near HoJo’s below the lower headwall of Tuckerman Ravine.

The last time I was on Mount Washington skiing, we’d camped out in a three-sided shelter. It’s a great experience that helps you escape all the distractions of life. Life has been chaotic after our move and I really needed to get away.

For the couple weeks leading up to the trip, I monitored weather models and the Mount Washington Avalanche Center to gain a sense of the snow conditions from a safety perspective. Having taught avalanche education in Colorado, this is something I’m in-tune with. As the date came closer it began to look like the weather and avalanche conditions would not be favorable. The forecast showed moderate to heavy amounts of rain streaming north Friday into Sunday. Additionally, Mount Washington had a very snowy year and the snowpack hadn’t seen much rain during the spring season. Rain on a dry snowpack isn’t good for snow stability.

A few days before my trip I was seriously doubting it would be worth the drive. I started to dig deeper into the weather data and noticed that the rain activity seemed to be coming in waves throughout the entire weekend. This gave me the idea that I could adjust my plans to stay at the start of the Tuckerman Ravine Trail at the Joe Dodge Lodge. Staying at the lodge would give me the ability to track the waves of rain and time the best periods to ski.

Additionally, I knew the skiing was continuous on the Sherburne Ski Trail from HoJo’s to the highway and if the avy danger was elevated, I could still do some laps on the Sherburne to stay safe. On midday Thursday I booked a spot in one of the shared bunk rooms at $59 per night, which included a buffet breakfast!

After work on Thursday night, I started packing. I picked up some Red Bull for the drive, food for the trail, and Goldfish — my go-to food after a day in the mountains. I loaded up the Jeep and got to sleep early with my alarm set for 3:00 am.

The drive went relatively quickly as I made it through high traffic areas well before the morning rush hour. I pulled into a muddy Pinkham Notch Visitor Center parking lot on the east side of Mount Washington around midday. The winds were ripping at low elevations and the peaks were socked in. I checked the radar and avalanche forecast and saw that the precip would hold off until later that evening. In addition, the avalanche forecast was low, outside of the Tuckerman headwall area. I headed up to HoJo’s to check things out.

It was a pleasant surprise to find great snow conditions for skinning straight from the parking lot. I put my legs on cruise control and did the 1,806 vertical feet at a nice leisurely pace. It was certainly wet, but it wasn’t raining. There was debris from trees littered all over the snowpack from the wind and it was very evident that the snowpack was melting fast since the three river crossings within the Cutler River drainage were raging.

I didn’t expect to find many people out in these conditions, but the parking lot was relatively full. I arrived at HoJo’s and found a good number of people hanging out on the deck. I saw a handful of people climbing and skiing Hillman’s Highway. I knew the avalanche conditions in Tuckerman Ravine had increased from low to moderate so I was not looking to ski in that area, especially since I didn’t have a partner.

Avy danger on Hillman’s was low so after chatting with a ranger on the conditions, I decided to head up. I skinned the short distance from HoJo’s to the base of Hillman’s. I transitioned my splitboard from skin to ride mode and put crampons underfoot. The climb up Hillman’s starts in the upper 30-degree range and quickly increases to 40 degrees for most of the climb up to the flat ridge.

It was eerie climbing the slope as the cloud layer was low and incredibly thick once you were in it. Visibility never exceeded 25 feet for the duration of the climb and the only sign of others on the trail was their voices. My only indication that I was reaching the top of the ridge came from my Delorme inReach. Soon after I arrived, a father and son showed up. We geared up and decided to ski the line together.

Dropping into Hillman’s in these conditions was like skiing into a white abyss. I hadn’t skied steep lines in a while as the first few turns were not exactly comfortable. It’s possible I was experiencing vertigo due to the lack of visibility.

The snow on Hillman’s was superb. The warm temps had softened it enough to allow me to dig in the edges of my board and the cloud layer kept the snow from getting too soft. With the combination of limited sleep, a long drive and just having climbed 3,330 feet, by the bottom I felt worked. At this point, I figured it was time to see what the Sherburne Ski Trail had to offer.

The conditions on the ski trail were equally good with solid coverage. This was the first time I’ve skied the trail top-to-bottom as it typically starts melting out down low pretty early. It was a cool feeling skiing a trail with so much history. The Sherburne was originally cut by the Civilian Conservation Corps in the 1930s as a descent route from Tuckerman Ravine. The trail has that classic New England feel with plenty of turns and some nice drops along the way. Exhausted, I was ready to check in to Joe Dodge and grab a beer and dinner. I unpacked, cleaned up and headed down the road to The Notch Grille.

On Saturday I planned to sleep in since the forecast was for rain in the morning. I woke at 7:30 and found the forecast was wrong, as is often the case. I quickly jumped out of bed and headed over to the visitor center for breakfast. Before long I was back skinning the Tuckerman Ravine Trail in an attempt to beat the rain. My plan was to lap the Sherburne a couple of times as there was zero chance I was venturing up high with the heightened avalanche conditions. The headwall area of Tuckerman was listed at “considerable” with mention of “possible historic wet slab avalanche activity” due to the deep snowpack and heavy rain in the forecast. Certainly nothing to mess with!

The rain held off until I got back to the parking lot. At 5:00 pm the rain stopped and I had to get out for another lap before dark. Up at HoJo’s, there was no one around, which is pretty rare in the spring. I hung out for 15 minutes taking in the surroundings before someone ventured over to the deck. He was staying up in one of the shelters for the weekend and wanted to stretch his legs a bit.

We chatted about the skiing and about how much snow had disappeared in the last 12 hours. The snow depth had dropped a foot since the morning. The ski out was certainly different than the day before, with rocks on each side. I was still able to ski top to bottom, but the route had some extra spice to it!

On Sunday I linked up with a couple from Massachusetts for the to skin up. These two were nearly 20 years older than me but were rocking it on the uphill. They definitely had me moving and we made quick work of the trail to HoJo’s. The weather was much improved, and when we arrived the atmosphere was more lively. People were scoping out options from the deck and chatting about where to ski.

I had my eyes set on another line variation of Hillman’s again, as I didn’t have a lot of time; I was driving back to Pennsylvania that afternoon. I ran into my a dorm mate from Joe Dodge who had also decided to ski the Hillman’s area. We teamed up to boot up Hillman’s together. It was great to finally be able to take in the surroundings of the Mount Washington zone. It truly does have some amazing east coast scenery.

I was in the zone, and really feeling good being out there. This was the feeling I was longing for and I felt extremely grateful to be experiencing it. On Easter Sunday I was in church — out in nature — connected in the mountains. We snapped photos of the area at the top of our line and got our gear ready. This line on Hillman’s was more exposed and required a steep traverse above a small cliff band to enter the couloir proper. My partner dropped in first in some creamy snow conditions. 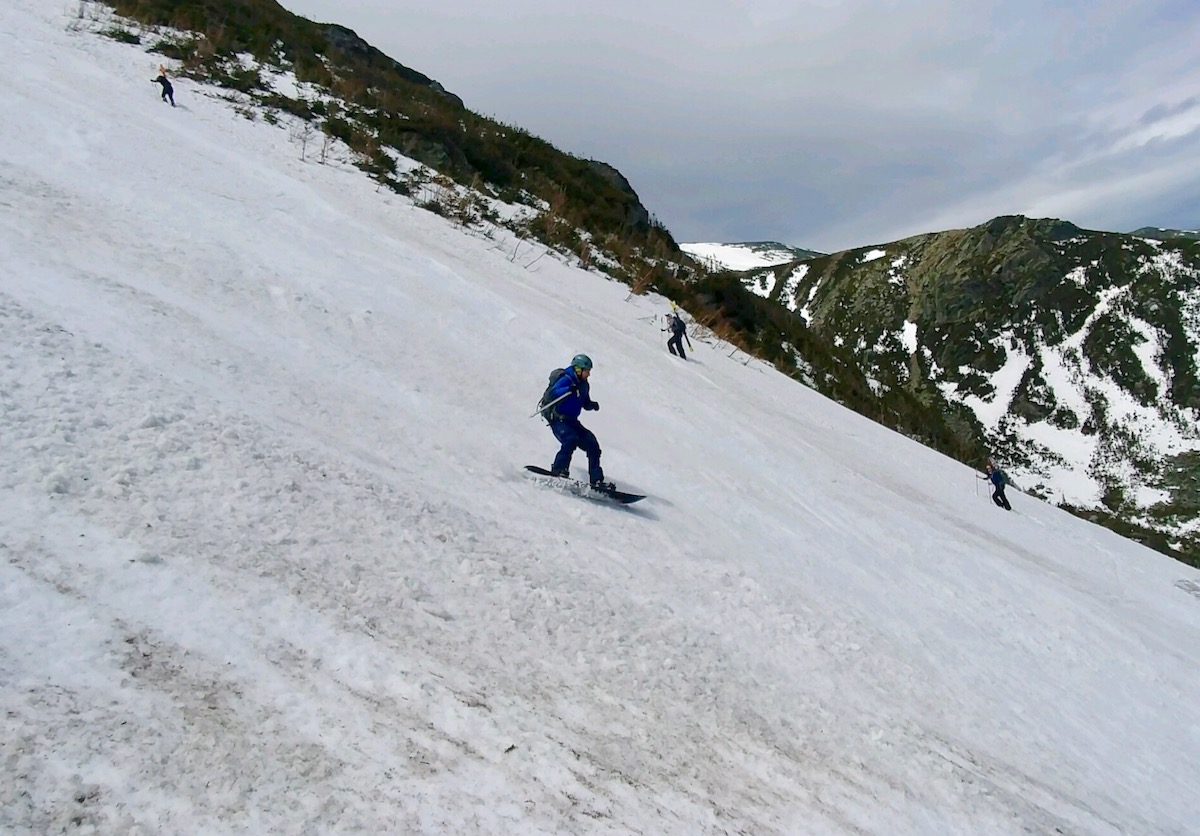 The snow was wet — almost past it’s prime — and could easily start sloughing if you cut too hard. In these conditions you really need to plan your angle across the slope to maintain elevation to avoid the obstacle below, while preventing your edge from sliding out. Once through the cliff band, the meat of the line was what I was hoping for; turn after turn of creamy snow. I felt totally comfortable and really opened it up; about as much as I ever will in the backcountry. The run down was one of my best in a long time and I really felt on my game.

This was a great way to cap off the weekend, and the icing on the cake was the Sherburne in front of me. Given the sunnier weather, the icy snow had softened and we were back to ripping turns down a classic ski trail.

This trip to New Hampshire exceeded my expectations. It was a prime example of “you don’t know until you go” and it taught me to never get too discouraged by the forecast. In one way it was an advantage; I was able to experience Mount Washington without a crowd. It really shows that there are always good things waiting for you if you keep an open mind and look the right way.

11 comments on “Return to Mount Washington”