The Peak Mountain hike at the northern end of the Siamese Ponds Wilderness is normally reserved for clear days, to take advantage of sweeping views from the summit. But with forecasts calling for thunderstorms later in the day, I was looking for a close-to-home hiking option, so I could be at the trailhead early.

I hadn’t been up the Peaked Mountain Pond Trail in several years, so I decided to go for it. The morning dawned clear, and I had visions of snagging fleeting views from the top. I made it to the trailhead at the end of the Beach Road at 7am.

As I walked along the shore of Thirteenth Lake, I could see that Balm of Gilead summit was in and out of the mist, and I knew the odds of seeing anything from the summit of Peaked were slim. 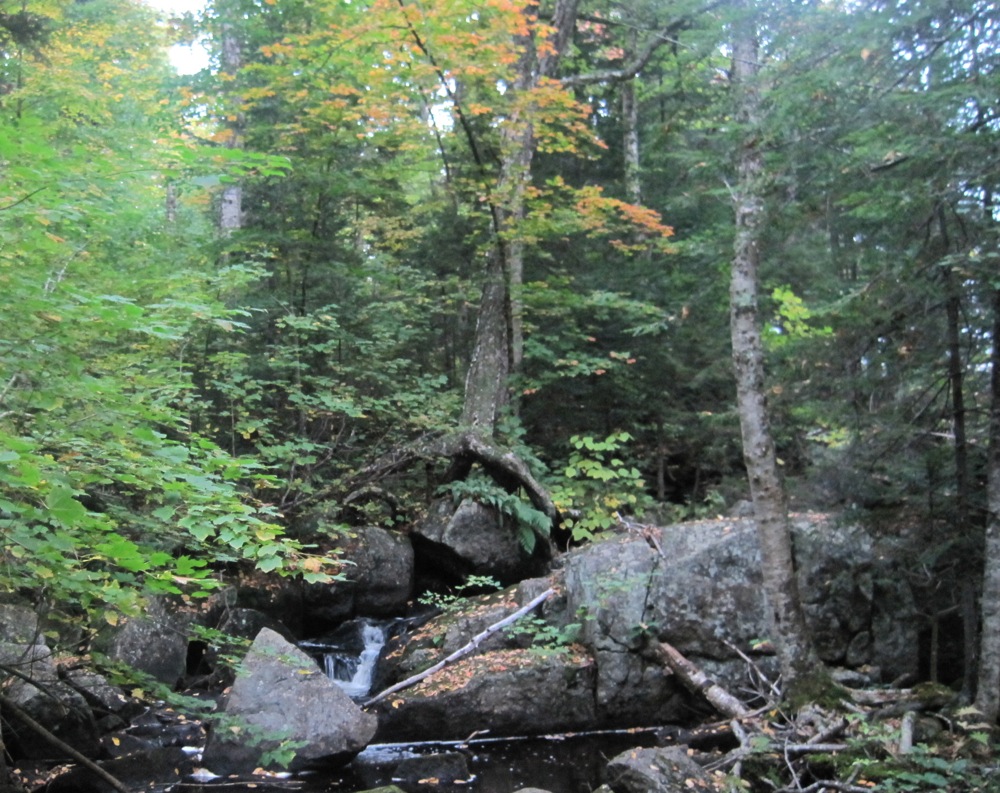 The lower reaches of the trail were as I remember them – roughly following the Peaked Mountain Pond Outlet heading up fairly gradually, crossing the stream a few times. One significant change is the bridge and the new trail that allows a hike around 13th Lake via the Hour Pond Trail.

Peaked Mountain Pond Brook runs through prime beaver country. It’s a reliable, year-round source of water that drops through a drainage with alternating pitches and flat spots. There always seems to be new beaver activity whenever you go. From previous hikes I remembered that you passed THREE beaver swamps before you came to the Pond. On this trip I lost count, but am sure I saw at least five of them. 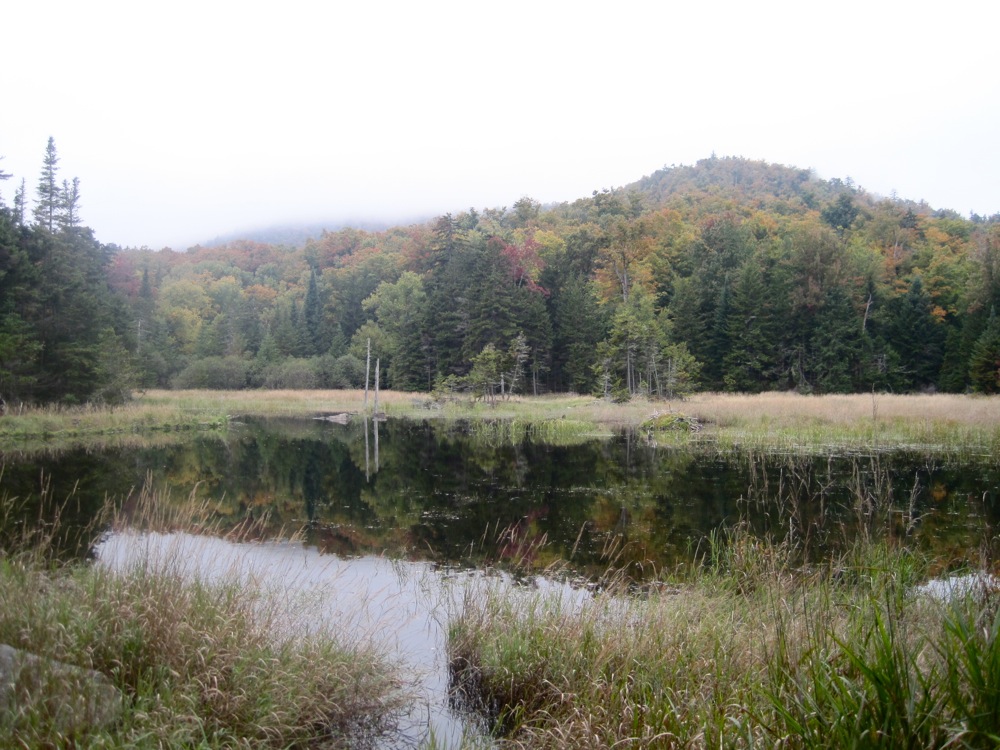 When I got the Pond, the summit was obscure in clouds, it was windy and it put me a bit on edge. Today I was ready to turn back at any time, based on an previous experience:

Several years ago, when we were high on Peaked, on a spectacular beautiful day, an intense thunderstorm cell seem to materialize out of nowhere. I’ll never forget feeling surrounded by the lightning, and hearing thunder claps right above my head. It poured so hard so quickly that we didn’t have time to don our rain gear. We put our pack covers on and busted it down the trail. By the time we got back to the pond the sun was out again, but we were so shaken, we continued all the way back down to the lake.

I ate the first half of my lunch at 8:45 overlooking the water. I hit the trail again, headed around the pond, and started the steep climb up to the Peaked summit.

I’d forgotten about a spectacular yet sublime part of this hike that I used to call the Cathedral.  It’s feels like a big scoop was taken out of the mountain, and in the cirque created, there are majestic boulders and trees that reach to the sky.  It’s hard to portray the magic of the spot. 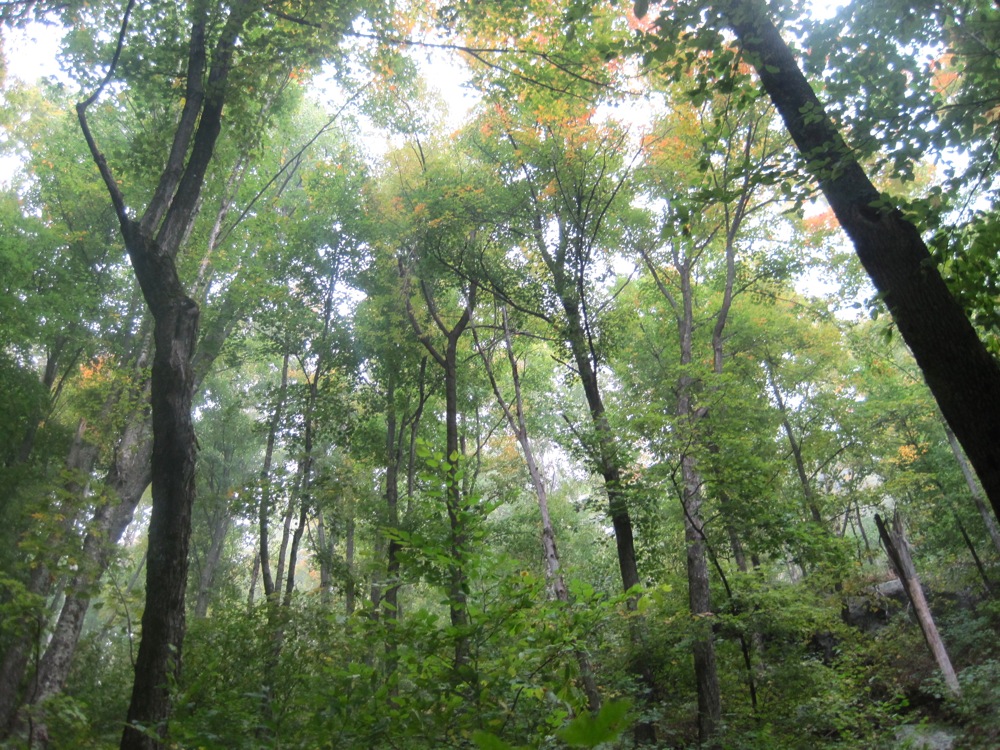 I scrambled up higher and higher.  Up top there is a lot of exposed bedrock, and it’s smart to look back down the trail at key points where you turn.  There are very few trail markers near the summit, and coming down can be confusing. 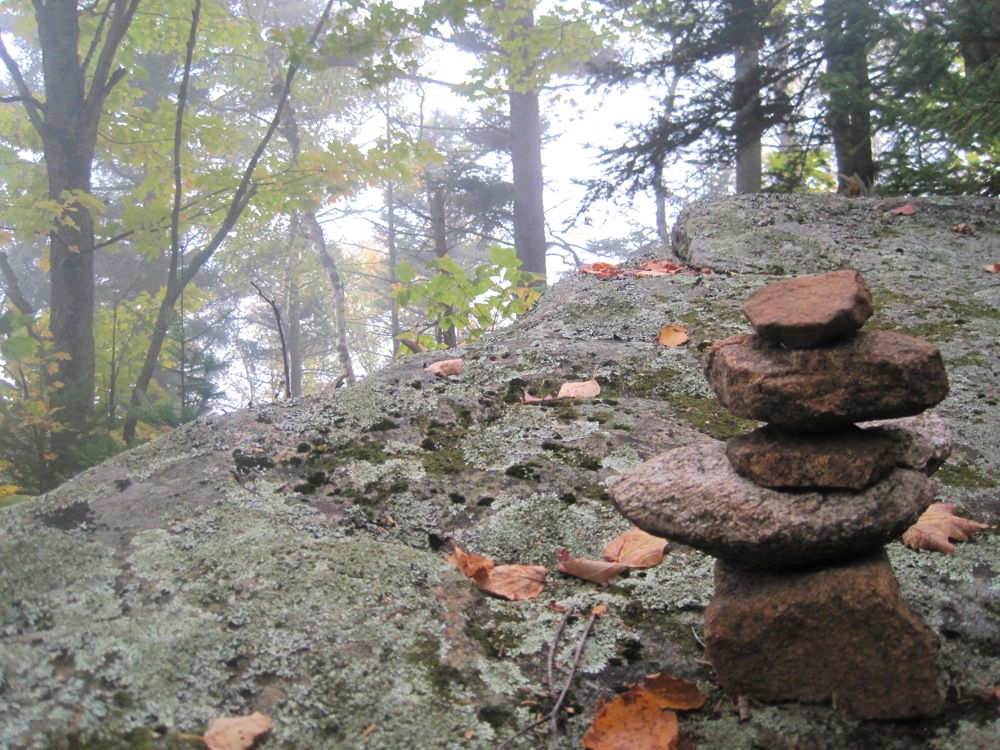 I climbed higher and moved into the no vis zone. The trees are mature and thinly spaced, creating visual excitement even without the views. The summit was completely socked in, windy and spritzing rain. I paused for a few minutes, took one photo and headed back down out of the wind. 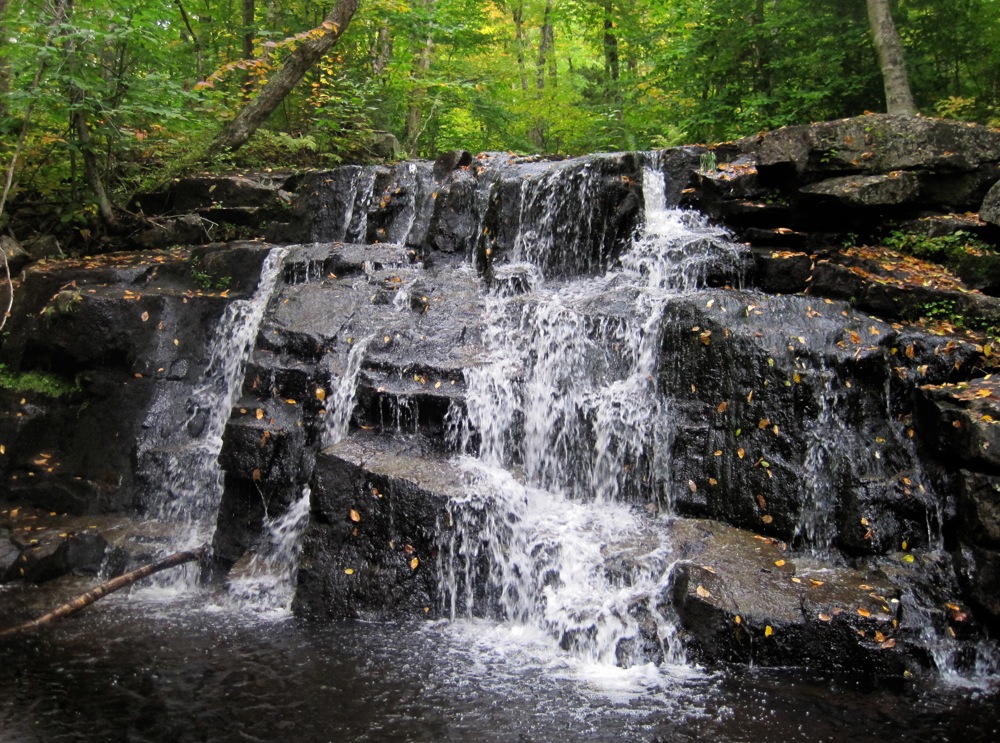 As I descended, the wind died down and the sky got progressively brighter. Once I got below the pond, I took my time noticing everything I’d blown by on the way up.

Walking back down along Thirteenth Lake, it was partly sunny and weekend campers were relaxed, smiling and walking along the trail in sneakers.