Lake Sebago, at 310 acres, is the biggest lake in Harriman State Park. It’s name supposedly means “big water” in Algonquin, though Wikipedia didn’t indicate which Algonquin language that was. My guide books don’t include that information either. Hopefully it’s from the Lenape language since they lived in the area prior to the Europeans arriving. 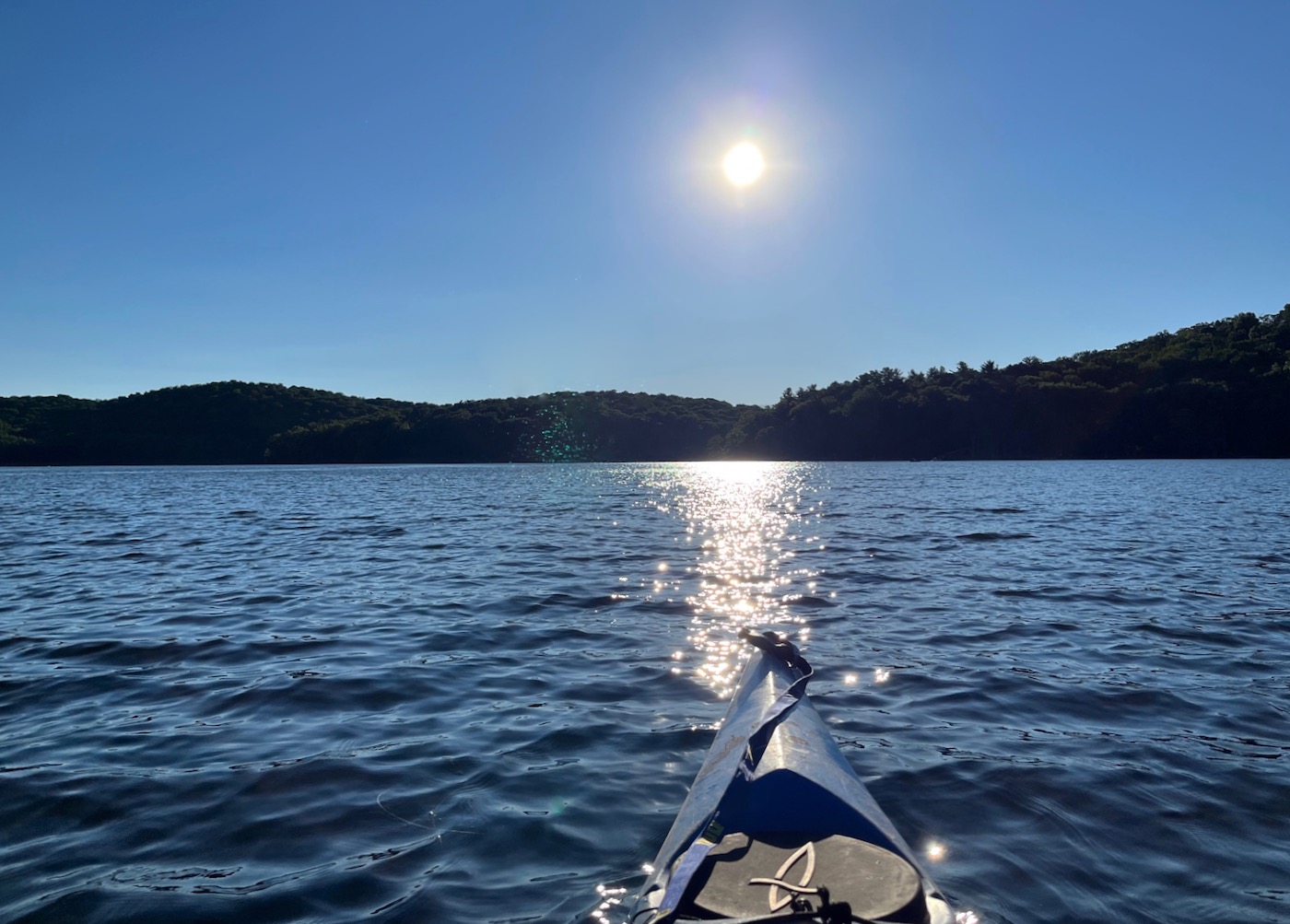 On the other hand, Lake Sebago didn’t exist in precolonial times. It was created in 1925 by damming a section of Stony Brook, flooding the former logging community of Johnsontown, which had been condemned by the Palisades Interstate Park Commission and torn down a few years earlier. Maybe they should have named it Lake Eminent Domain.

Now Lake Sebago is one of my favorite local paddling spots. The main lake is long and narrow and there’s a long arm extending to the north so there’s lots of shoreline to explore, about six miles worth. There are a couple of private camps with cabins and some Tentr glamping wall tents available for rent between the shore and Seven Lakes Drive but, overall, the feel of the place is natural and remote. 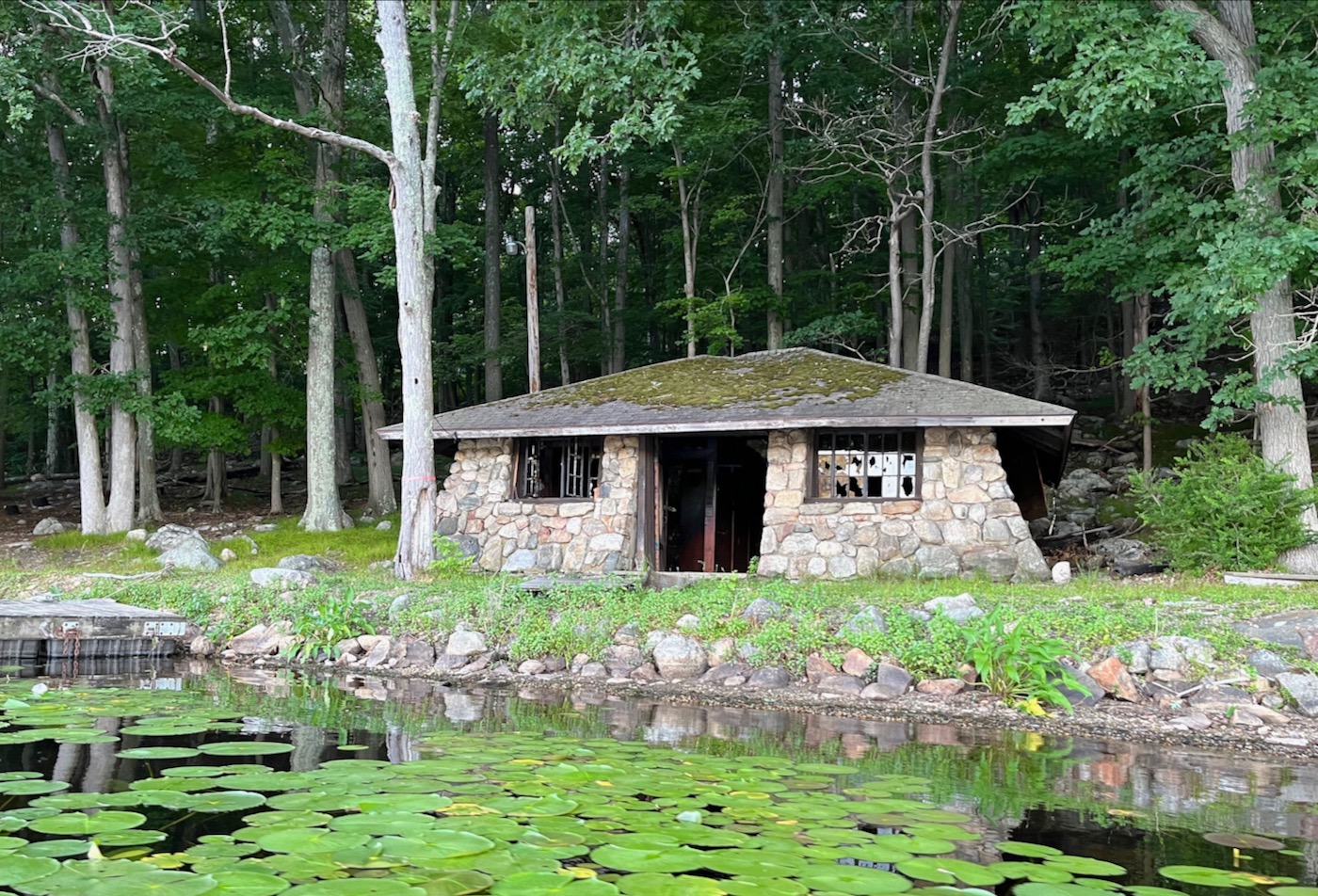 There is limited parking at the boat dock off Seven Lakes Drive, between the Tentr sites, Sebago Cabins to the west and the site of the original public beach to the east. A cross country skiing trail can be accessed from this parking area when there’s snow on the ground. On summer weekends, the place gets crowded so it’s best to go either first thing in the morning or in the evening after some of the crowds have dissipated. I like the evenings the best.

The launch features a dock, which I like, but you can slide your boat in over the rocks next to the dock if you prefer. From there I usually paddle straight across the lake to enter Sebago’s northern arm. This part of the lake feels more remote and untouched, maybe because you can’t hear the sounds from Seven Lakes Drive. I take my time paddling down to the end where a beach and picnic area is located. 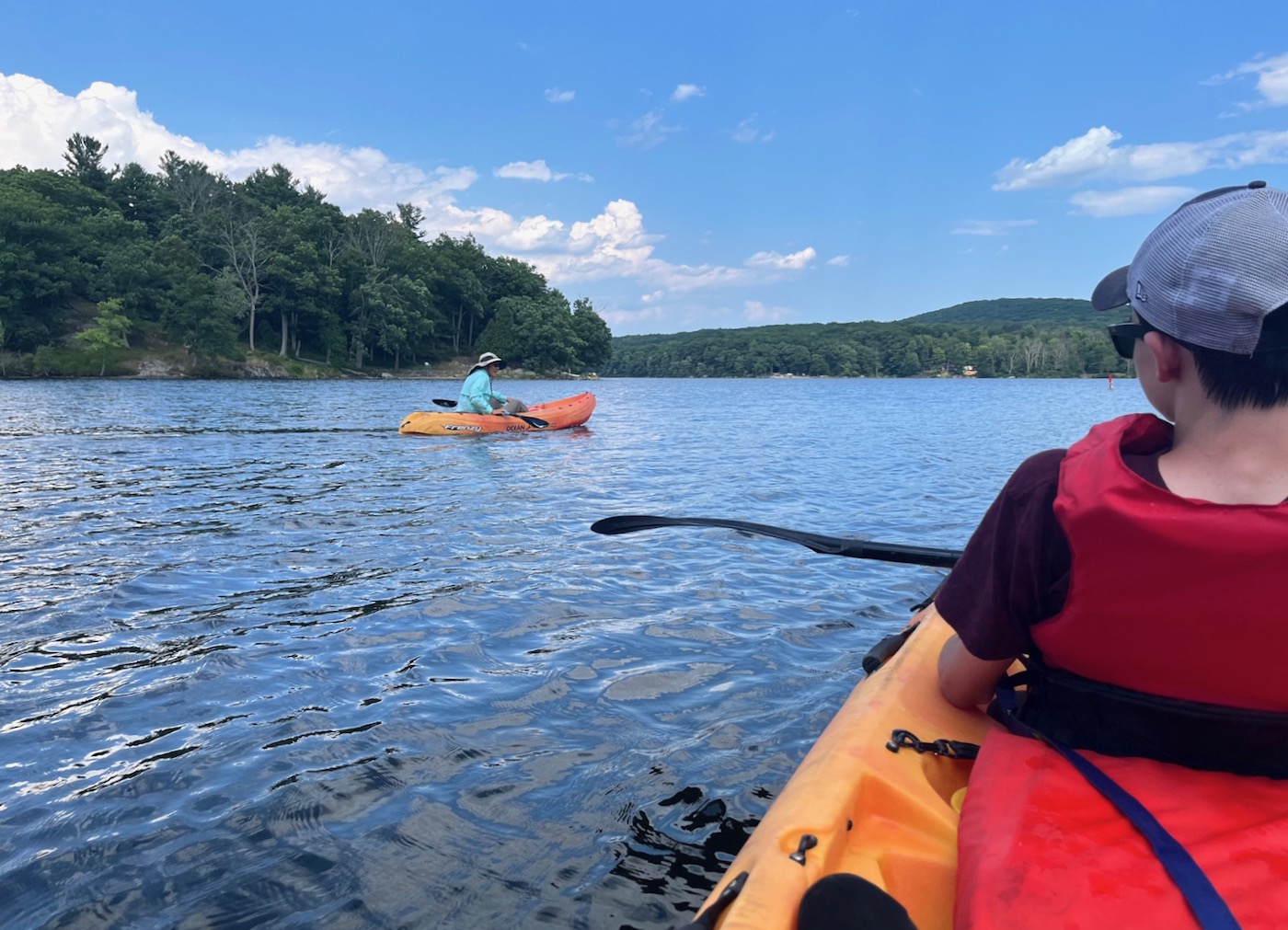 The beach has been closed since Hurricane Irene did some damage and the picnic grounds were closed after more damage from Hurricane Sandy. Now the area has an abandoned NELSAP sort of feel to it. Tall grass has grown in on the beach itself and the benches and buildings are showing some weathering. Last time I was there, I saw an excavator parked next to one of the buildings, making me wonder if they were going to try reviving it.

Once you reach the beach and picnic area, there’s nowhere to go but back. I usually turn right (to the west) when I complete a lap of Sebago’s northern arm. The camps on the western end see some use and people can usually be seen wading near Sebago Cabins or the Tentr sites. 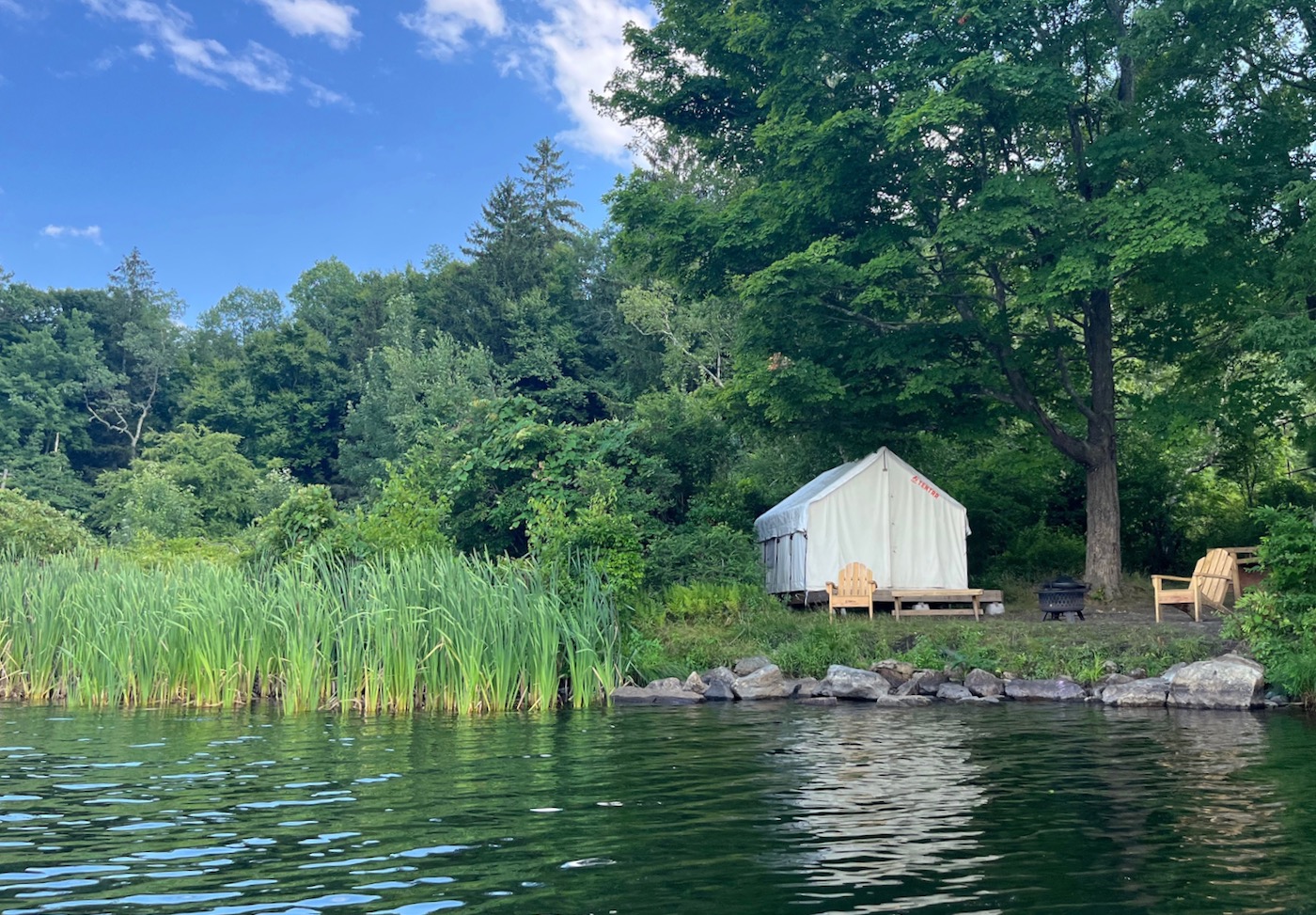 One of the camps on the western end of the lake is run by the American Canoe Association. I’ve never seen anyone with scuba gear there but I’ve read that the remains of Johnsontown’s lumber mill can still be seen on the bottom near their dock. There’s a broad dam on the western end holding Sebago back from flowing over Seven Lakes Drive. The old beach to the east of the boat dock tends to draw hikers and picnickers as well.

Lake Sebago is a nice spot for wildlife viewing too. It is the first place I saw a water snake in the wild, while canoeing there with my older son years ago. You have a good chance of spotting turtles, deer and many different bird species. 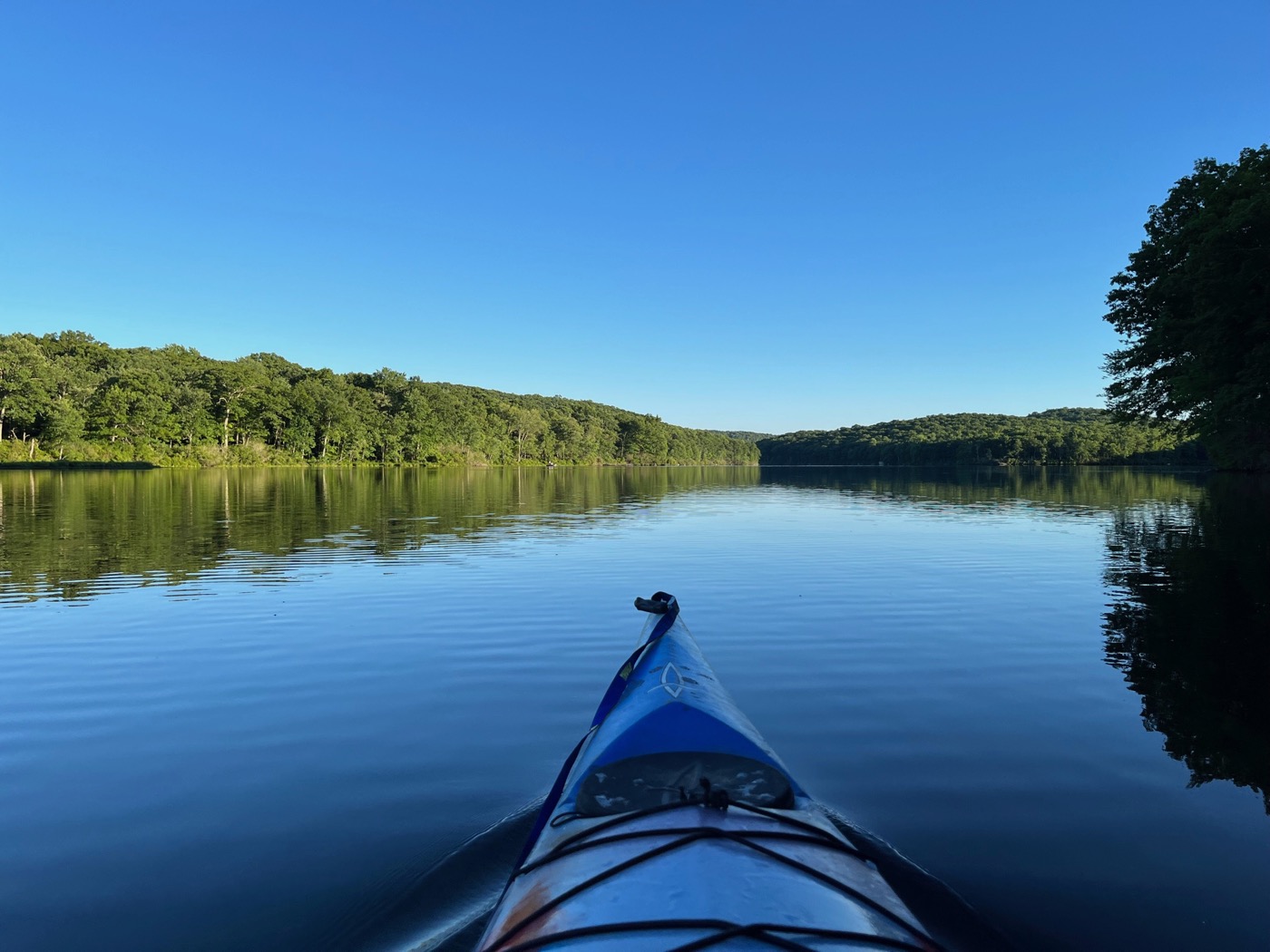 On my last visit, while paddling one of my tandem kayaks with my younger son, a huge bald eagle chased a smaller bird across the lake right in front of us. It happened so fast and went by so quickly I couldn’t get my phone out in time to get a picture but it was spectacular.

It’s a cool spot to paddle.