It seems like anywhere I paddle around the metro area, I come across the remains of an abandoned boat. On the Rondout’s Creek in Kingston, in Piermont Marsh, the Middle Bay on Long Island, there’s always a long abandoned hulk, usually so old that the hull has been eaten to the water line. Sometimes all that’s left is an old V8 sticking out of the mud at low tide, watching the years go by as it slowly rusts to nothing. 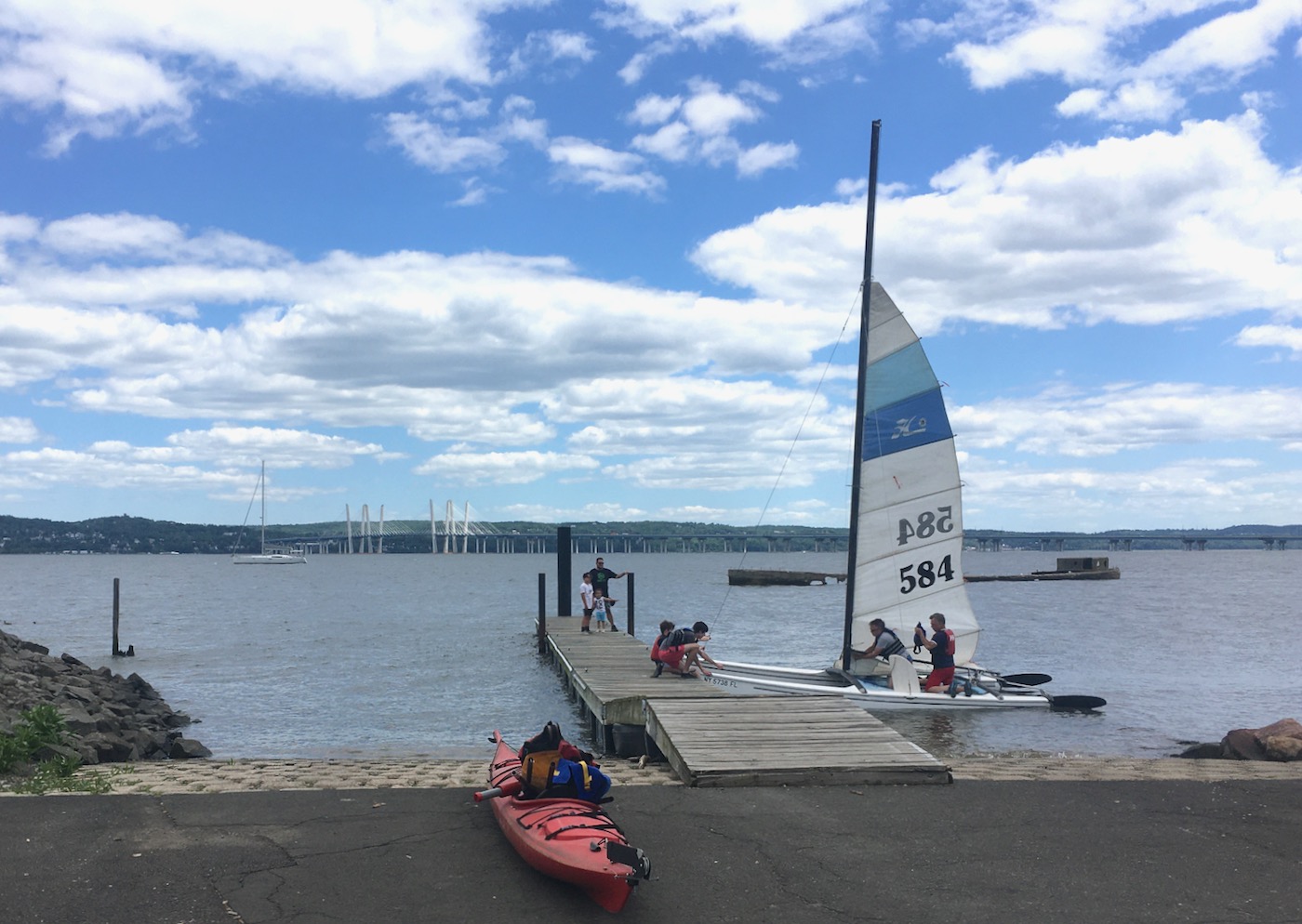 One of the most baffling examples sits in the middle of “my zone” — the west shore of the Tappan Zee in Rockland County. Right in Nyack, yards away from the marina sits a deteriorating hunk of concrete in the unmistakable shape of a ship. I’ve always been intrigued by the wrecks I’ve encountered but this one fascinates me the most.

It’s easy to imagine somebody accidentally running a fishing boat aground and not having the means to retrieve it or somebody committing insurance fraud to dispose of a craft they can’t afford or can’t sell.

But this thing is right in the middle of a suburban waterfront, not off in some muddy corner of a swamp. And it’s clearly made of concrete. 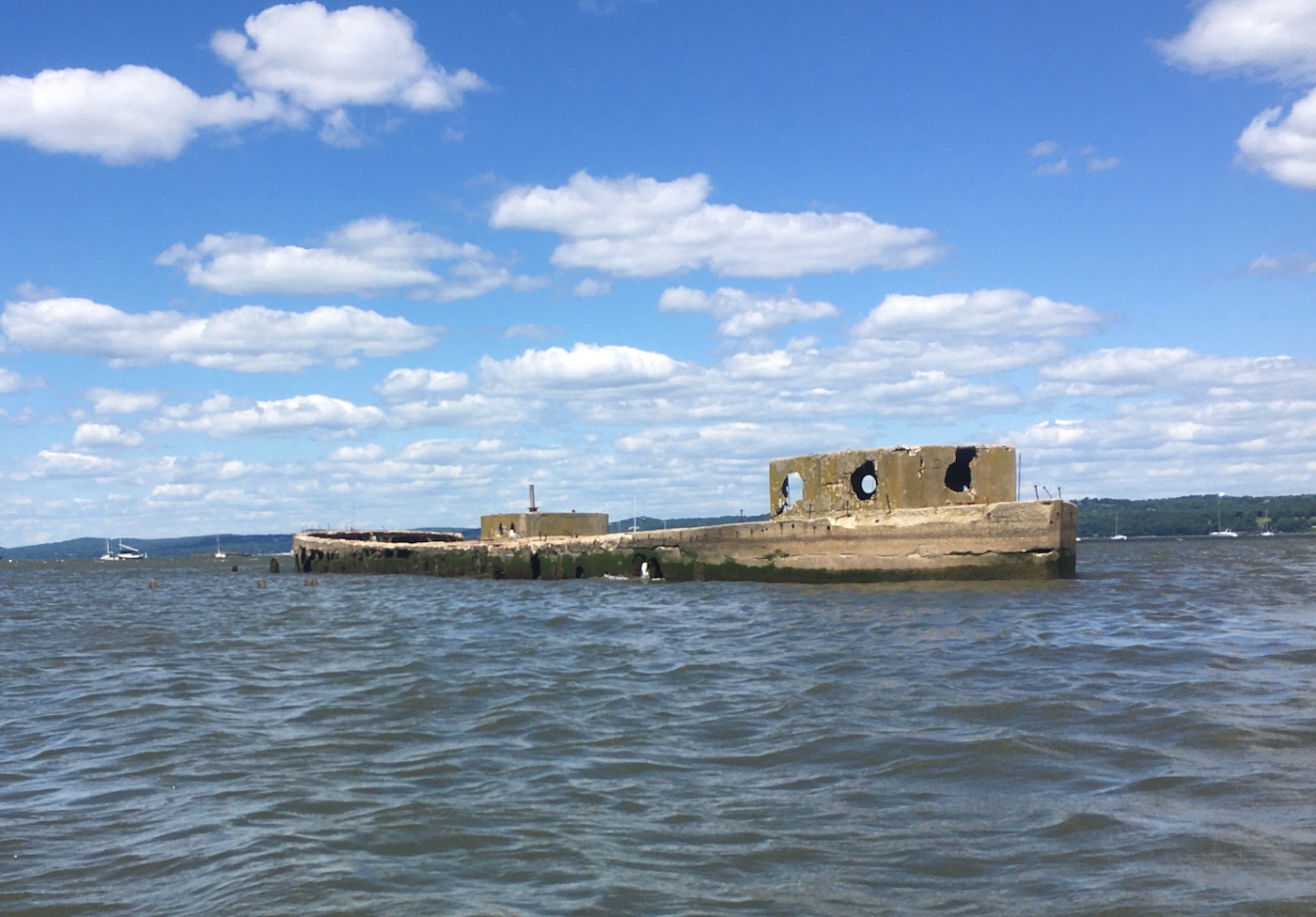 I thought boats were made of wood or metal. Who the hell makes a naval vessel of concrete? Of course I googled “concrete ship” years ago. It turns out that the pressure to produce enough shipping during both world wars forced the U.S. to consider all kinds of novel ideas. Building ships from concrete, though it seems like a boneheaded idea now, was tried more then once.

A little more research revealed exactly where this one came from and how it ended up here. During World War One, somebody made a bunch of canal barges out of concrete. This one was brought here to help construct the nearby park. It was to help contain dirt fill brought in to expand the land out into the river but the barge was scuttled too far off shore, just out of incompetence it seems. And there it has sat ever since.

I was reminded of my old friend the concrete barge the other day. Sunday afternoon, I put my red sea kayak on my car and drove the fifteen minutes to Nyack Marina to launch from a nice proper concrete ramp. A parking officer had his Jeep parked across the entrance to the ramp rear but he backed it up and waved me in when he saw the boat on top of my car. I dropped my kayak and gear, and then moved my vehicle to the parking area. 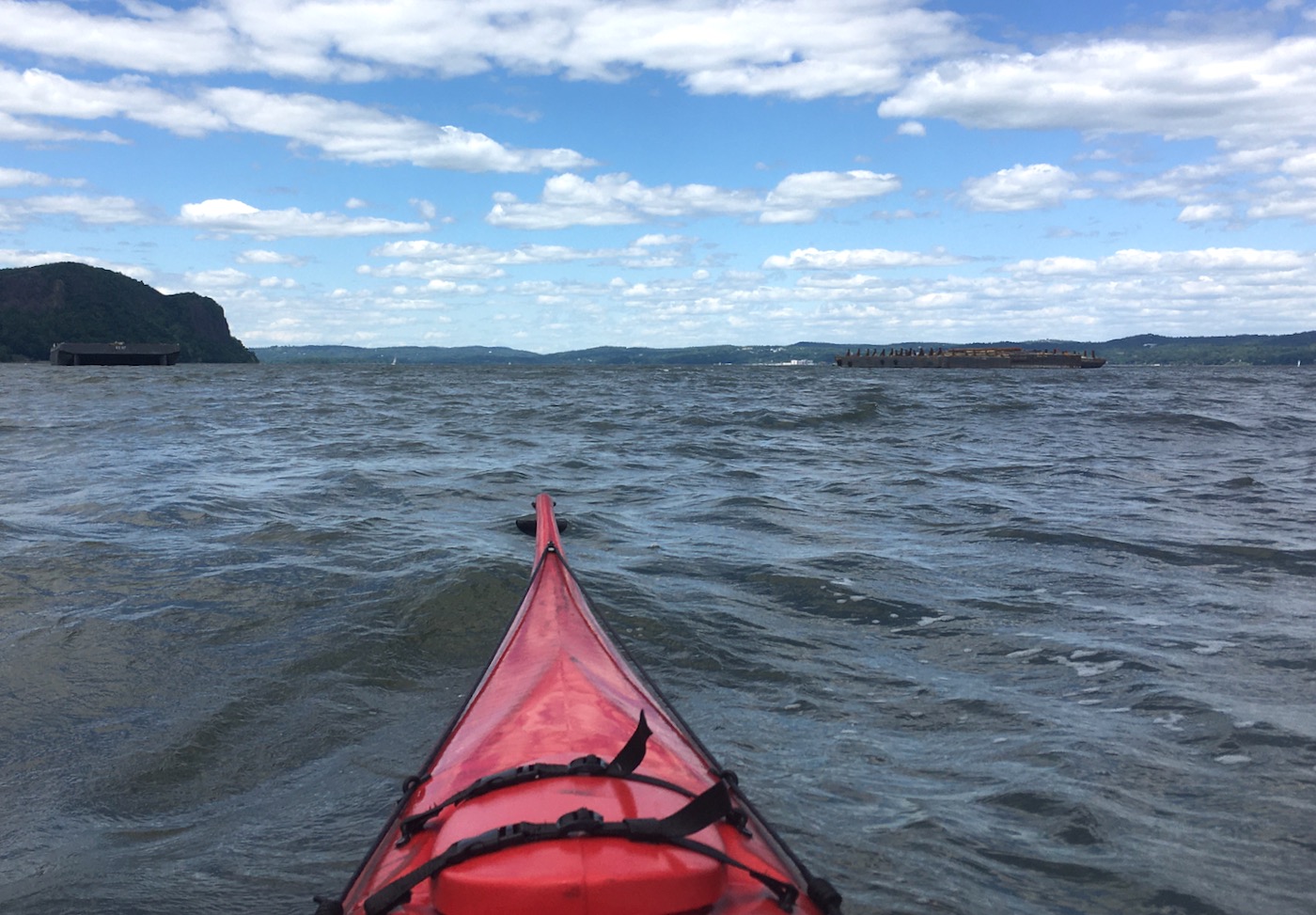 Like all outdoor public spaces these days, the marina and park were hopping. With various degrees of success at social distancing, people were enjoying the sunny afternoon as best they could. I got my gear squared away, put on my PFD and spray skirt, and dragged my kayak down to the water. I could feel a bit of wind so I attached the skirt to the cockpit in case the water was rough.

Out on the water, the wind was stronger and more consistent then it was on shore. It was blowing northeast to southwest, pushing one wave after another diagonally across the Tappan Zee. Well, I thought, I’m here to exercise anyway. I left the rudder stowed, pointed my bow directly into the wind and paddled, striving for a perfect stroke. With the wind, I wasn’t going anywhere fast. I wanted to at least get to Nyack Beach, at the north end of the town before turning around.

It was a slog but it was fun for me. Being out on the river, in the elements, getting a workout under challenging conditions is what it’s all about. I made my way north, slowly working away from shore so I could keep my bow pointed directly into the wind. I noticed there were few pleasure craft bobbing next to their buoys. I wondered, for a moment, if it was due to some executive order I didn’t know. This wasn’t the place for those thoughts. 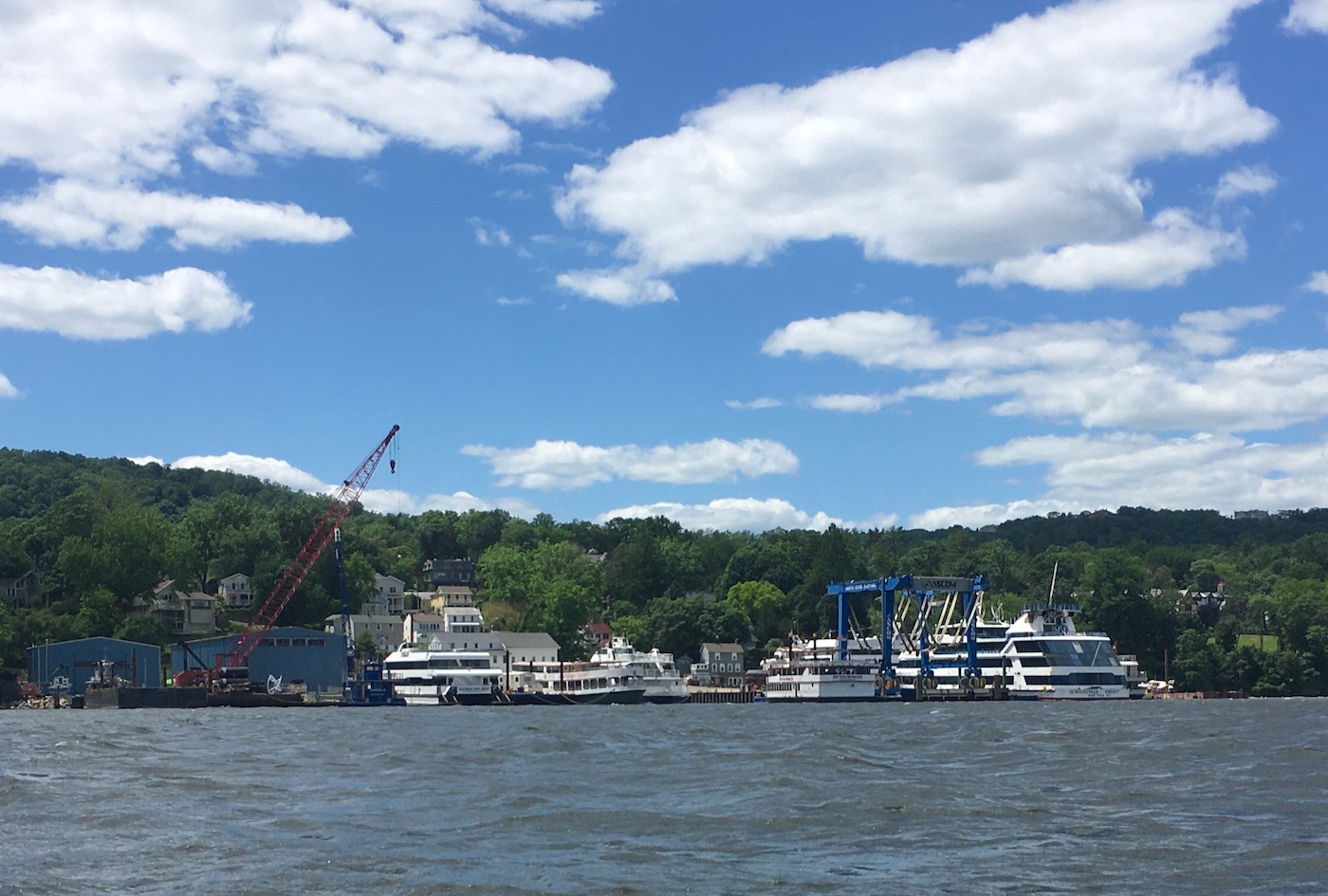 I focused on a construction barge anchored off Upper Nyack and kept on. The wave sets were pretty close together and coming fast. They weren’t all that big but they were steep enough to thrust my bow up into the air as I rode over them, slapping down on the water’s surface as I dropped back down. Some where thirty six inches high, enough to break over my kayak’s deck and slosh down past my hips. It wasn’t anything my boat couldn’t handle but certainly would have filled the cockpit if I wasn’t using the skirt.

It took an hour to reach the construction barge. Waves washed my water bottle out from under the deck bungees and into the river a couple times, forcing me to turn around and retrieve it. This is harder then it sounds. The water was moving pretty quickly and thirty two ounce water bottle tends to drift at a different rate then a seventeen foot sea kayak. Working out an intercept was tricky. After the second time, I jammed it inside my vest instead of trusting the bungees again. 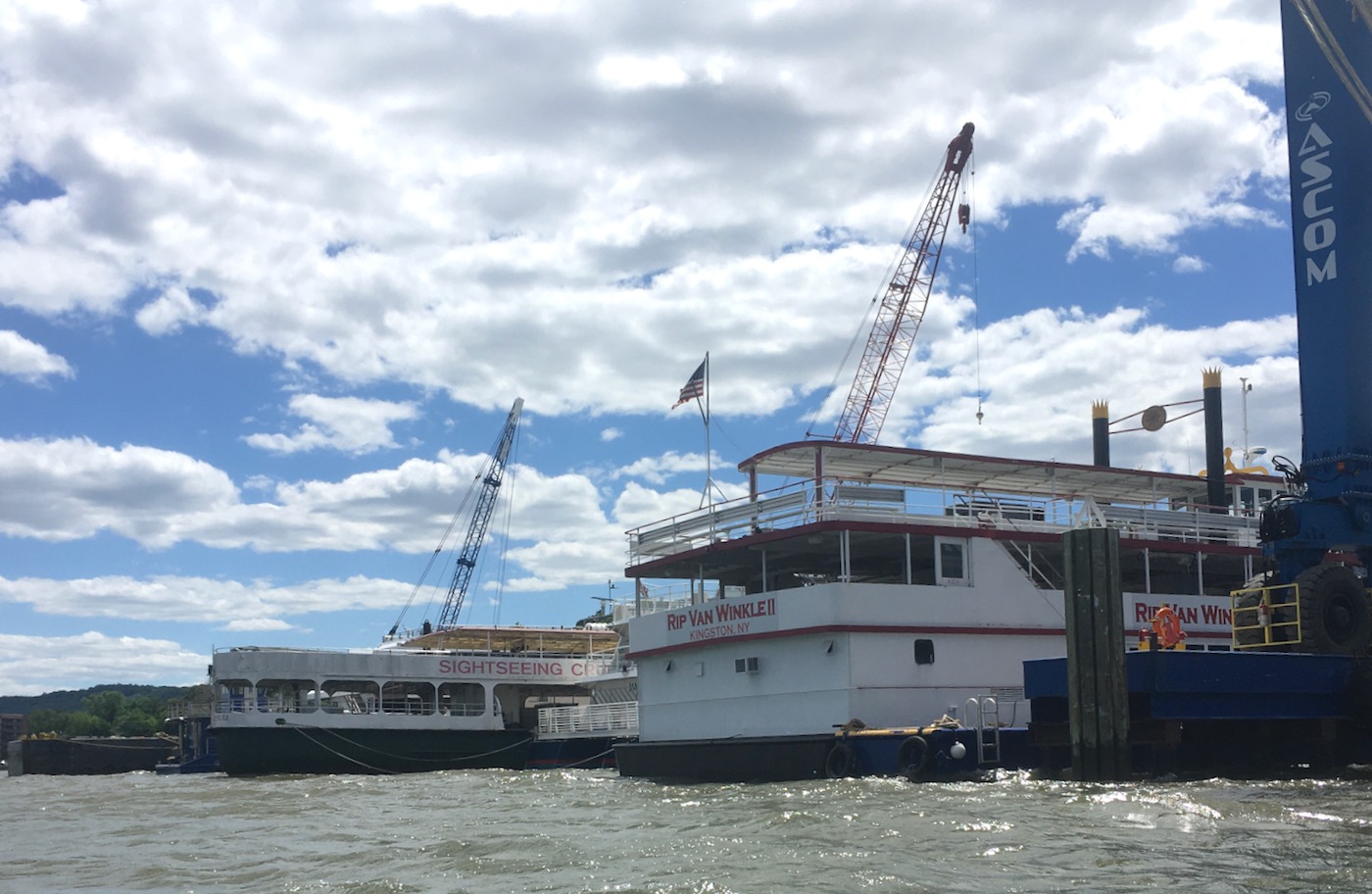 There was a nice tennis court sized patch of calm water on the leeward side of the barge so I took a break, sipped some water and snapped some pics. My last leg of paddling to reach Nyack beach would no longer be head-on into the wind so I decided to go ahead and deploy my rudder. Now the waves were attacking me at a forty five degree angle. A little right pedal kept me pointed in the direction I wanted.

There were some big party boats tied up in another marina off to my left and as I kept going I noticed one of them was my old friend the Rip Van Winkle 2, out of Kingston. Probably not in service right now due to…. crap, don’t want to think about that now. I battled the rest of the way up to Nyack beach and, satisfied with myself, stopped paddling.

The wind immediately started me on my return trip back south. I barely put any work into it now, just enough paddle and rudder pedal to avoid being washed up on shore. The river propelled me back past the Van Winkle 2. I noticed the other ships next to her were out of place too. One sightseeing boat was from NJ, a couple party boats were from the city. None of them said Nyack on the stern. Oh well. Hopefully they can get back to work soon. 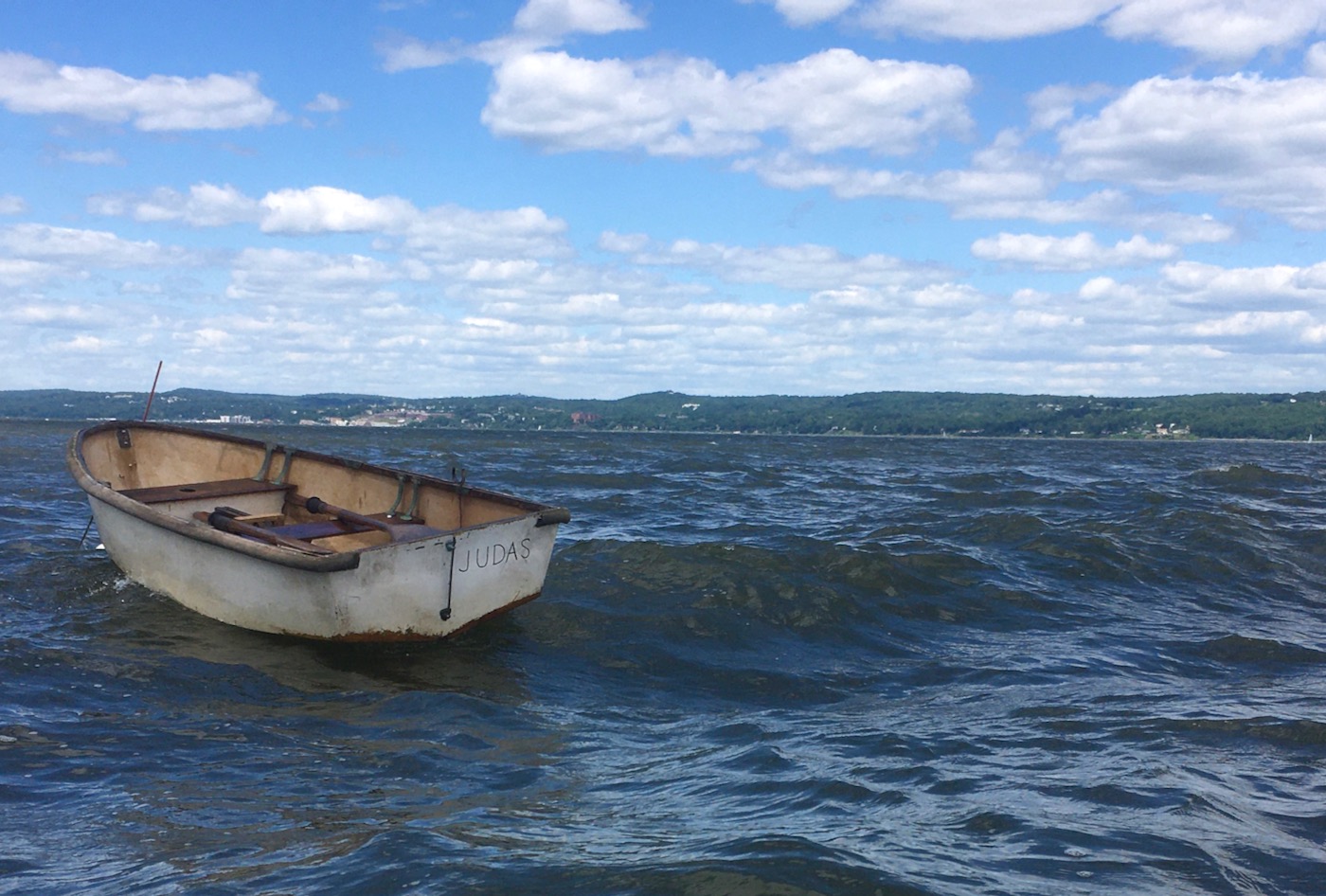 I played around on the waves a little on the way south, successfully catching a short surf here and there. I paid a little more attention to the moored sailboats I passed and lingered by a dingy that was being thrown around by the waves but seemed completely unperturbed, just hanging out, bobbing next to its buoy. I don’t know. Something about that dingy made me happy.

A motor boat cam up pretty fast behind me so I turned away, not sure if he saw me or not. A tender from a boat club zipped past me, probably going to retrieve somebody from their sailboat, further out. He was also getting bounced back and forth by the chop but motored right through. Before I knew it I was back in Nyack, not ready to quit yet, wishing I’d gone farther north before turning around. I did a few laps around the concrete barge and spent some time practicing my bracing and lean turns, enjoying the river and fresh air.

I eventually landed and started loading up the car. I’ve noticed that for some reason people are more curious about a kayak coming out of the water then one going in. Nobody ever talks to me when I launch but it’s twenty questions when I land. Where did you go? How was it? How long were you out there? One time a nice Korean lady just clapped for when I landed after a thunder storm had rolled up the river. 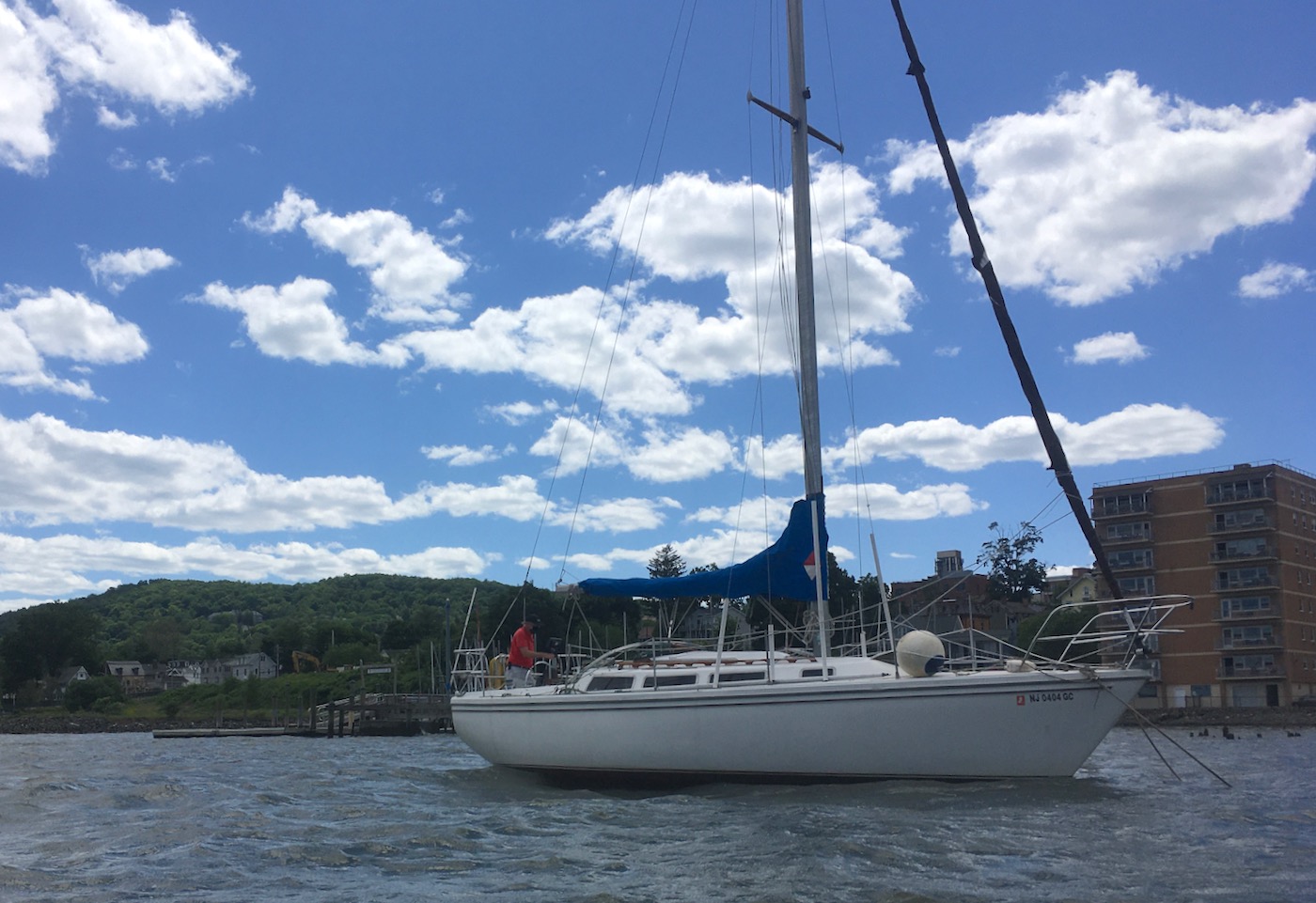 On Sunday, I noticed an older guy eyeing me as I hefted my boat up to the top of my vehicle. I threw my back out about two months ago so I’ve finally started wearing a brace for this part of the operation.

“How much does that weigh?” He asked once he’d caught my eye, I told him I didn’t know but that it was pretty heavy. “Mine weighs thirty two but it’s only ten feet,” he continued, “I can’t put it up by myself.”

I smiled at him. My boat weighs at least twice that, probably a bit more, closer to eighty pounds. “I don’t know,” I said, “It’s a lot heavier than that.”

5 comments on “Nyack Kayak and the Concrete Barge”