MLK weekend seems to be the point where the season really takes off at Magic. This year was no different. The snow report measured 7-10″ on Saturday and we had at least that much at our house not too far away. Unfortunately, it was mank, but great for base-building. Still, the “hordes” came out for a chance at a face shot. That wasn’t happening on Saturday. 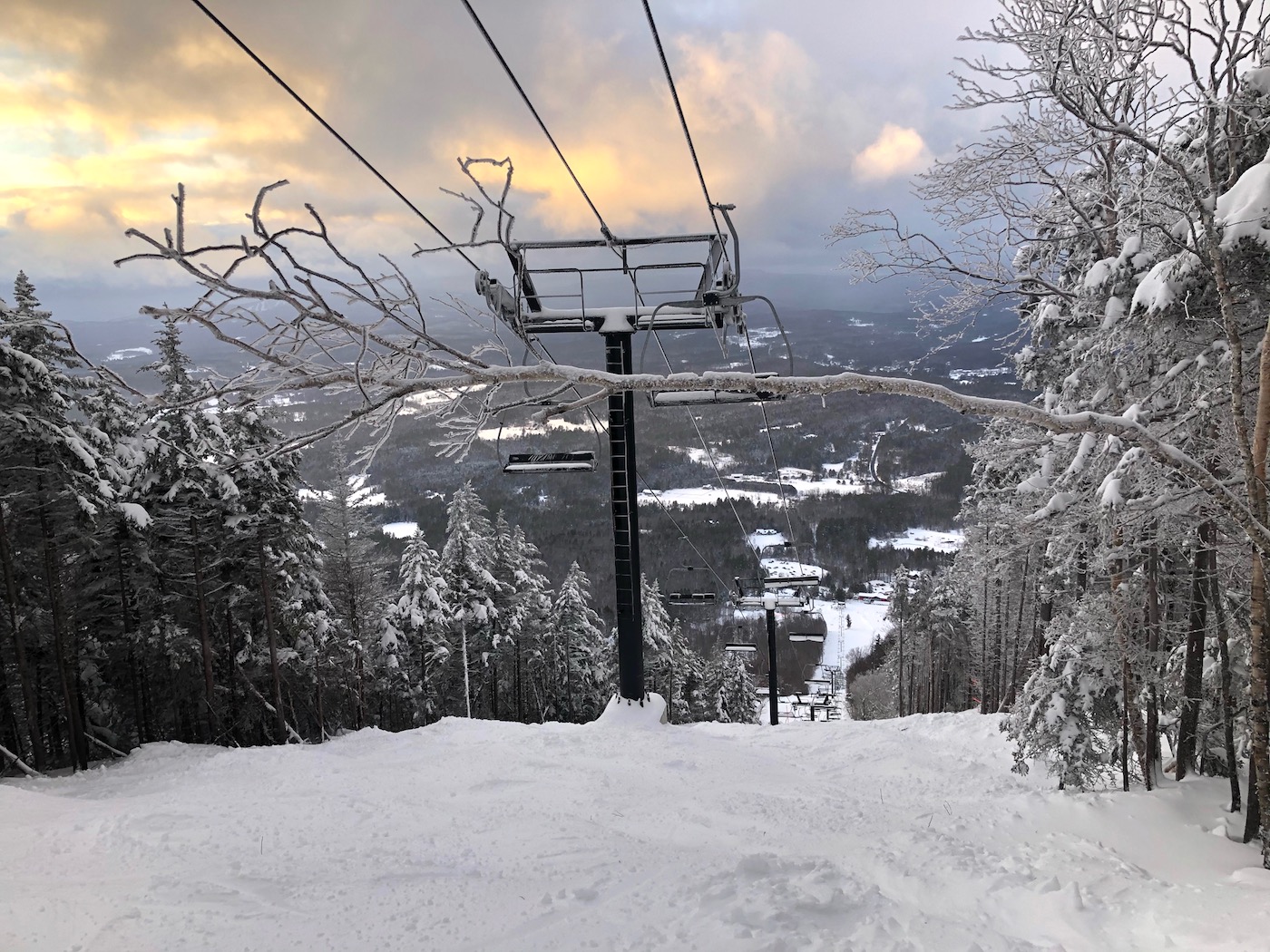 I know my assignment is to give more than a trip report and to try to capture the “essence” of the area. Magic is a place that normally has more essence than most, but this season is far from normal. I will say that the skiers have been thankful for the work the staff has done and they complied with Magic’s operating rules. If somebody let their mask slip off their nose, a staff member was quick to politely ask that they correct it.

It’s been hard this year to feel the “vibe.” Lift corrals at Magic normally feel like Cheers, where everybody knows your name. With masks covering faces and new jackets for the new year, it’s been different. Still great, but different. 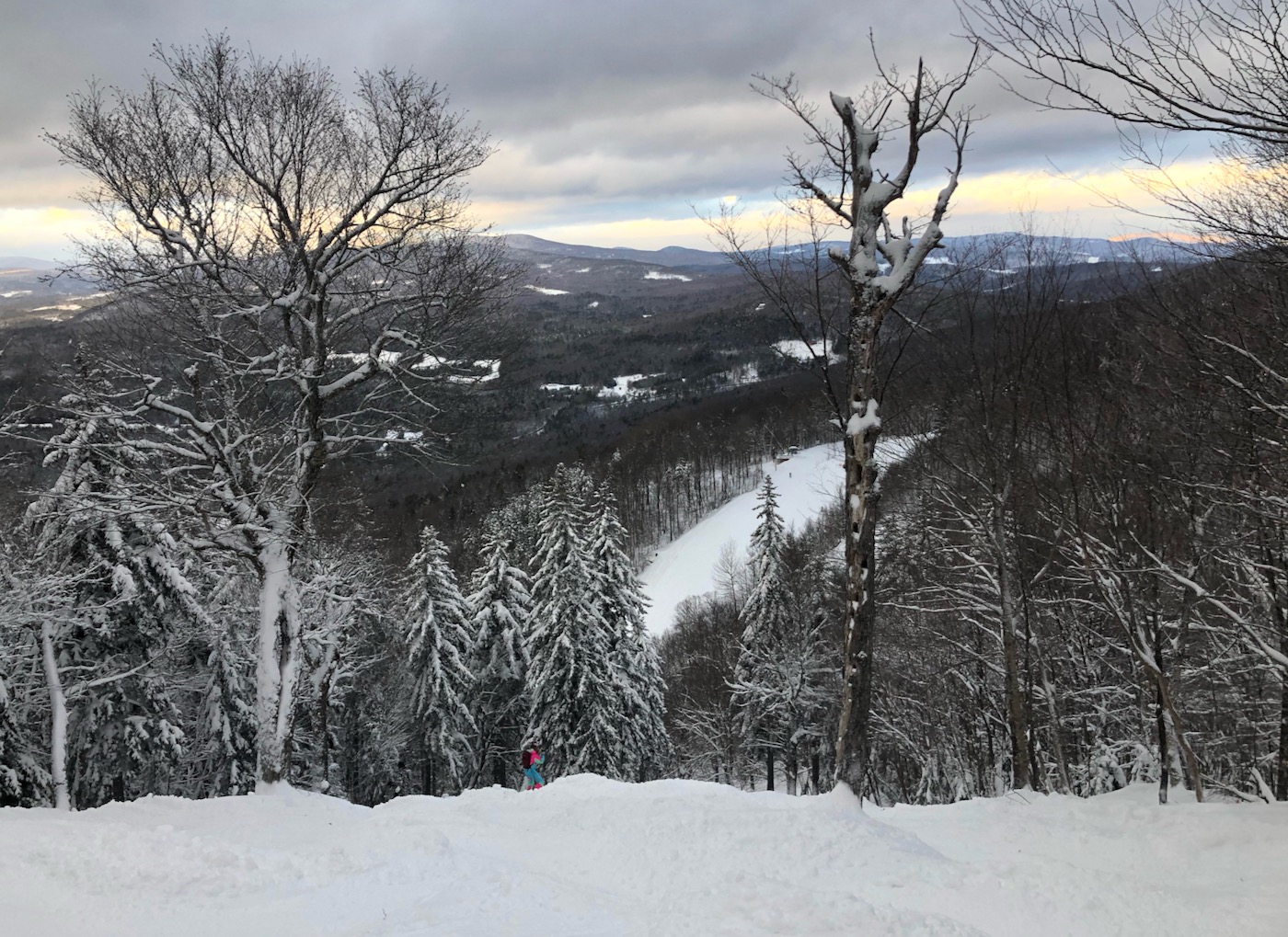 My neighbor Bill and I got off to a late start on Sunday. We had gotten a text from our friend Dave that the upslope snow that fell overnight — another 3-4″ according to the snow report — was hiding a deadly coral reef as Saturday’s mank had frozen up. He advised sticking to groomers and we made the most of it with fun fast runs.

The crowds, while not unusual for the holiday weekend, had a lot of new Magic regulars complaining. Lift lines were no more than 15 minutes — nothing compared to Stratton and Mount Snow — but they had become accustomed to skiing onto the lift, so they complained. For our last run, we hit a favorite steep, ungroomed run on the mountain’s west side. It skied shockingly well. We were excited for a less crowded, awesome day of holiday skiing on Monday. 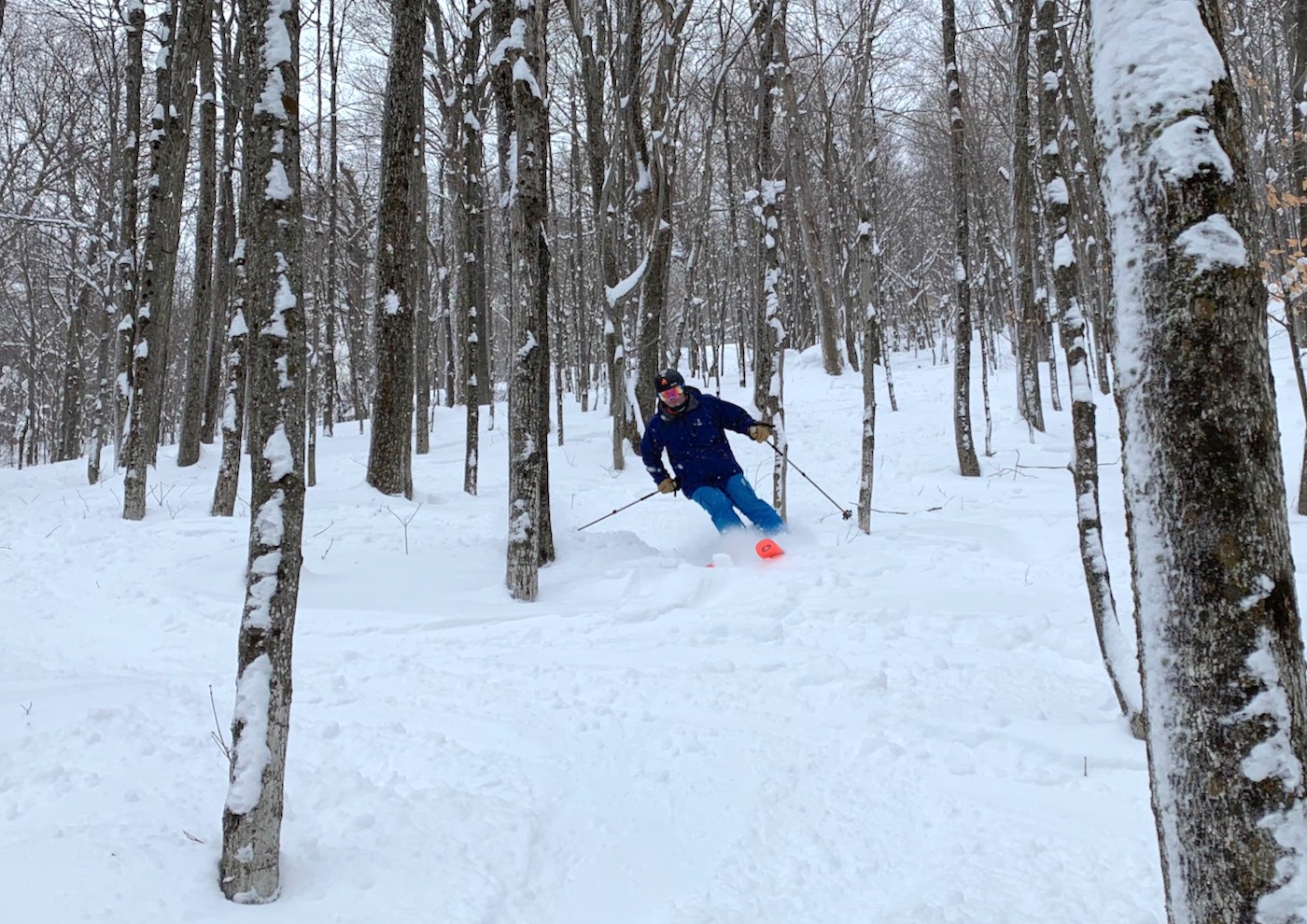 Most of the crowds were gone the next day and we had the place mostly to ourselves, again. Bill and I were there for opening bell and Dave joined us after our first 3 runs. Once the word got out that the frozen mank underneath another 3-4″ of overnight fluff had softened, people started coming out. Lift lines never exceeded 5 minutes and we got all the skiing we could handle.

We like to “ski the progression” meaning start at either the westernmost or easternmost trail and work our way across. We decided to start on the west and were pleasantly surprised at how well the ungroomed steeps were skiing. Slide of Hans, Sorceror, Talisman, Magician (from the top), Pitch Black to Black Line, Goniff Glade, Twilight Zone, and Trick Woods (not really on the map yet) fell in quick succession. It was the Ski Magic LLC President, Geoff Hatheway, who suggested Trick Woods over the normal progression to Trick, the trail. 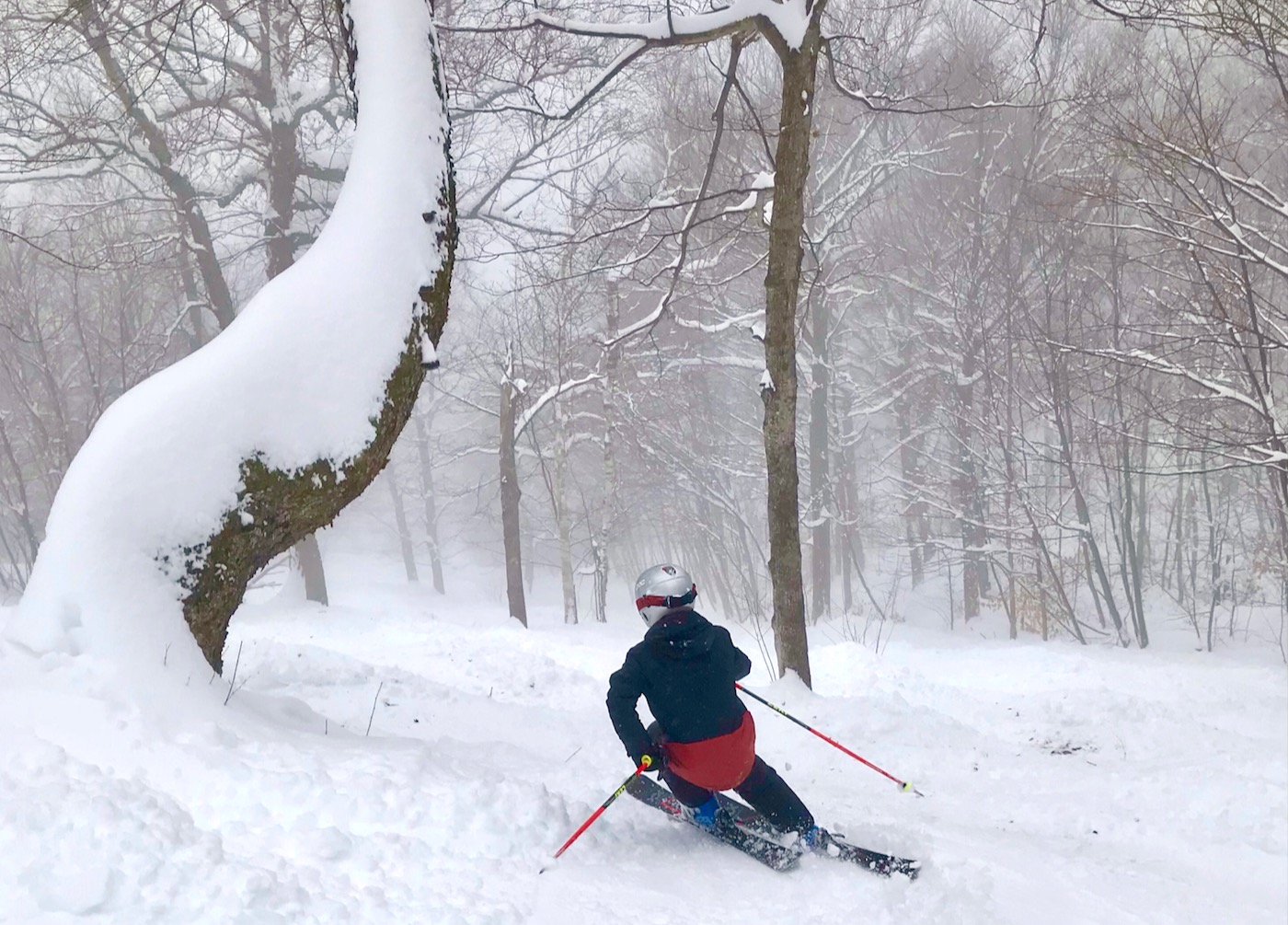 It’s not at all unusual to see the “suits” out working and product testing at Magic. Geoff’s an extremely approachable guy and always has a smile on. You can even see that smile with a mask on. The snow on all of those runs was phenomenal. Not blower and not uber deep but soft, smooth, and utterly fun to ski. Smiles and whoops were everywhere on the mountain.

We stopped for a quick break to recharge our legs and hydrate with some of Vermont’s finest brews. The take-out window was out of decent beers so my wife went upstairs to the Black Line Tavern and asked Josh — the best damn bartender in Vermont — if we could get a couple to-go cups of Fiddlehead. 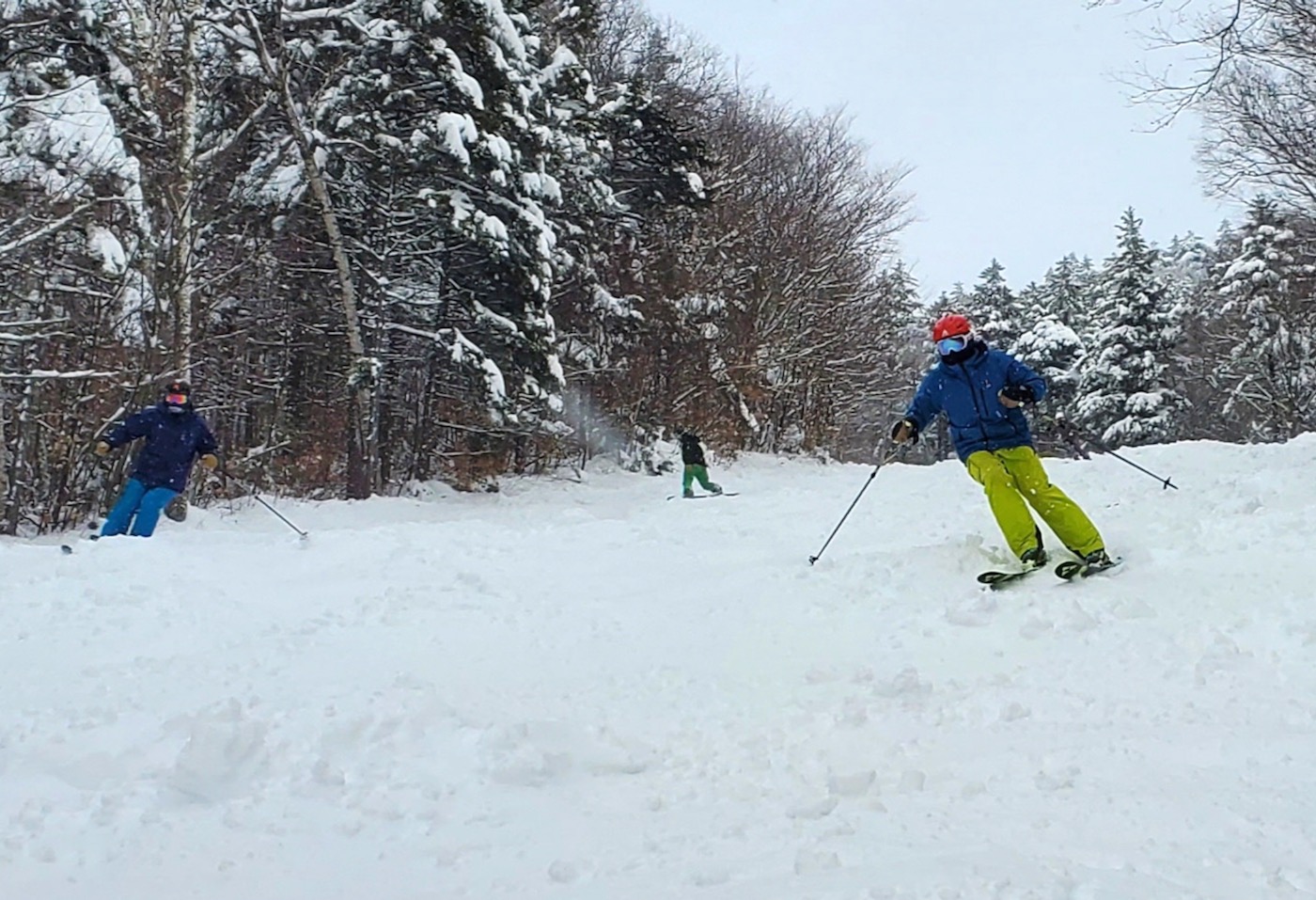 Like all of the staff at Magic, Josh will be a lifelong friend within 10 minutes of meeting him. He hooked us up and we drank our beer in the warming tent that Magic added to keep lodge occupancy within state guidelines. Then it was off to re-ski our favorite run from the morning, Magician, and one last run down the east side so we could ski most of the way home.

This was a typical sleeper day at Magic, not unlike the last time Harvey came to visit. Great snow, great friends, and a ski area that really gets it.

This season, NYSkiBlog has engaged a few guest writers, based in Vermont, to report on skiing across the border. This piece is part of that effort.