After skiing 3 days in the brutally windy cold, riding gondolas and high speed lifts, skiing on man-made with no new natural snow, I wasn’t sure if I wanted to venture out another day in the negative wind chills, especially at an old school place like MRG with slow lifts and no snowmaking. 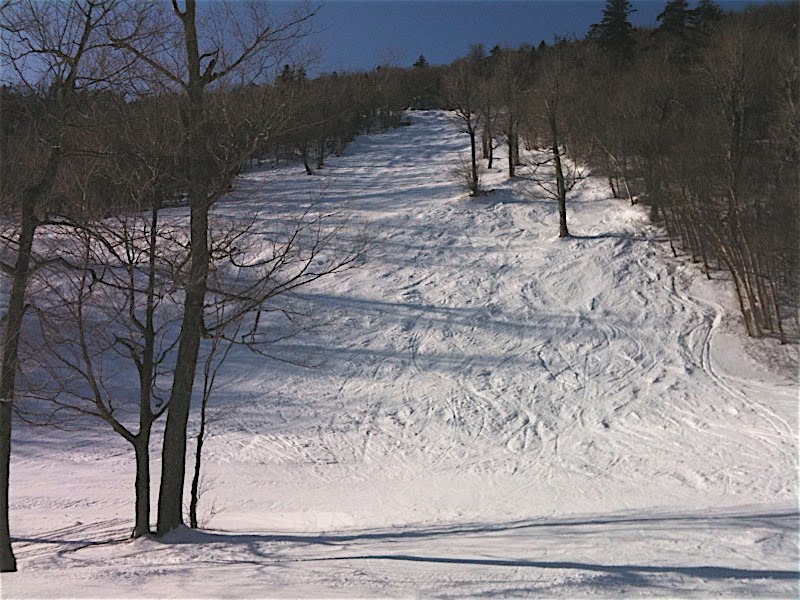 My dear old friend Jim, who lives in the MRV and is the GM of The Bridges Resort, a former snowboarder-turned-MRG-pinhead, who can ski any day, took the day off to ski with me at MRG, regardless of the cold and wind. He said it was going to be sunny and nice and the skiing will be good. I told him that if he was skiing, I was skiing, so out we went to the ski area that is just around the corner.

Wes strolls in the same time as we do. We boot up in the Basebox, layer up and head out. The single wasn’t running due to the wind, so we head to the double where we catch up to Bruce Shenker and his friend who just completed their first run.

The wind was ripping, but my morning warmth was trapped in all the layers, that included double base layers and double fleece under a lined parka with “toe heaters” in my boots and “hand warmers” in my gloves. I kept pretty comfortable, except for the wind biting the skin between my goggles and neck gaitor. As we got half-way up the mountain, the wind suddenly died off and we could feel the warmth of the sun under the bluebird sky.

We started down Panther, noodling our way down the interesting terrain. I don’t know the names of all the places we went, but the snow was carveable with ample coverage in most places. Dodging rocks and other terrain obstacles keeps the skiing exciting and fun. I immediately got too warm and had to open my jacket and loosen my neck gaitor. This was a good sign.

At the lift, my friend Chrispy was waiting. She rode up with me and we had some time to catch up on our lives, as we haven’t seen each other in almost two years, yet we’ve known each other for nearly 30 years. It was her first day back on skis and she is still a bit of a newbie to telemarking and wanted to take her time and ski the groomers alone. So we parted and I went with the guys on the more rugged terrain.

After a day of skiing high-speed groomers and bumps on mostly man-made snow, the natural features with natural snow at MRG truly made for a more interesting ski day.

The disparity between MRG and Killington is unreal. As a former Killington regular and Mtn Ambassador, I did not feel much of a connection to the place. I did a lot of rides in the gondola with 7 snowboarders. I talked to some skiers, but I didn’t get any warm feelings from people. It felt like everyone was from a metropolitan area. It felt very urban even though it wasn’t really busy. I never warmed up, always feeling somewhat chilled.

At MRG, it felt warm, despite the below zero windchills. The people were friendly and unpretentious. It certainly wasn’t busy, and it felt like a private social club. I’m sure being with a nice group of pals whom I have previously enjoyed skiing with helped with the warm fuzzies. Regardless of what it was, I liked it, and it was way better than Killington.

It was too bad that the single wasn’t running, but we skied for a few hours until Jim had to attend to family and I had to hit the road back to Ithaca with a stop for lunch with Chrispy in Bristol.

So now I’m back home, exhausted, and have 2 days to rest in my cubicle before having some time off to ski closer to home.

Rooting for that upcoming storm to freshen things up. They are saying 40s an NFP here on Xmas which is so hard to believe after it being so frigid. Regardless, I plan to spend the weekend sliding on my local ski hill and touring the state forest, no matter the weather.