I’ve had my eye on the Long Island Sound as a paddling destination for a while. I’ve worked in a Westchester County for years and have customers all along the Sound. Driving around the area, I constantly pass by bits of water in New Rochelle or Mamaroneck, that make me say “That looks like it would be fun to paddle. I wonder where I could put in.” 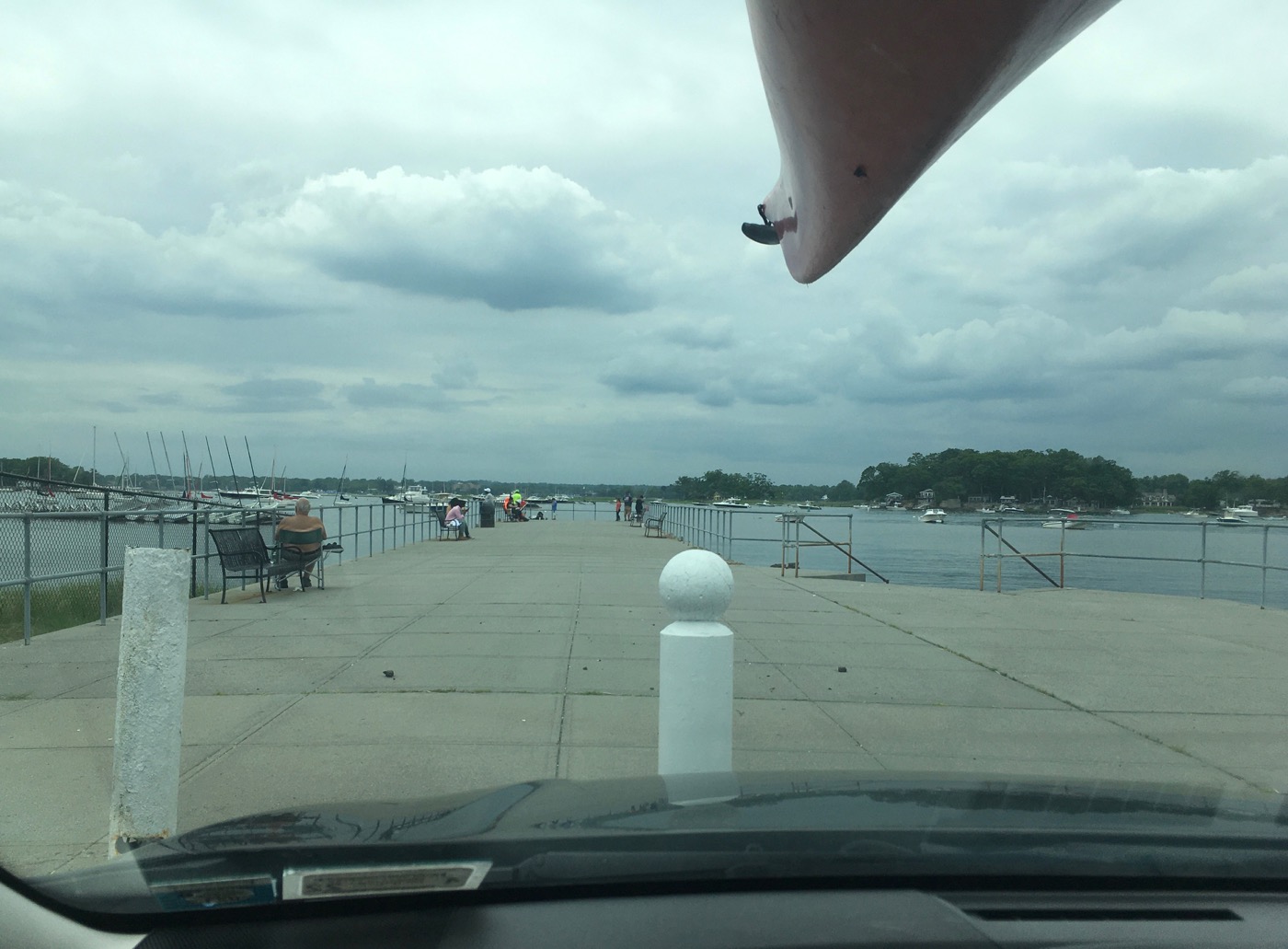 That is always the question. Along the Hudson, there are many spots where I can launch my kayak for free and the Hudson River Greenway Water Trail website makes finding them easy. My resource for finding launch spots outside my home zone is paddling.com. It’s useful, but not nearly as good as the site for the Greenway. Many of paddling.com’s entries lack detail.

One piece of information most of the entries do contain is whether or not you have to pay to park. Most of the places where I you launch a kayak in Westchester County require a parking fee or some kind of town permit. Thats how I settled on Rye Town Dock: no parking fee. It looked like a cool spot when I checked it out on a map. I’d be launching into Milton Harbor across from a marsh, Rye Playland was a little bit to the north on the shore of Long Island Sound. High tide was at 1:30 which would let me take care of some family stuff in the morning and then head over. 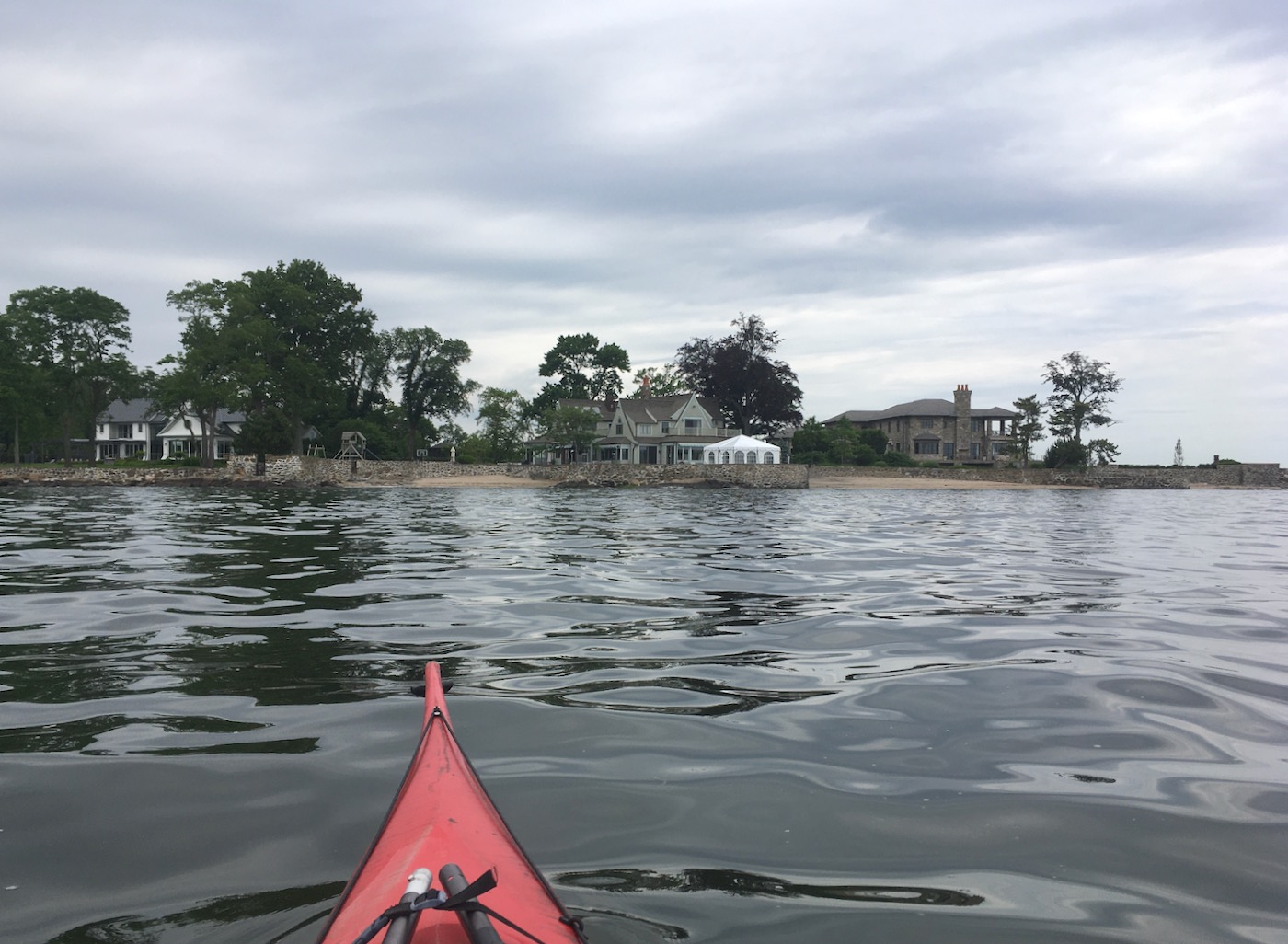 I followed my navigator to the dock’s coordinates. It took me through some pretty nice neighborhoods to the southern end of Peningo Neck, a narrow peninsula between the Milton Bay and Long Island Sound. Eventually the road ended at a driveway that was blocked by a gate next to a sign that said American Yacht Club. Not very inviting but I had reached my destination. Rye Town Dock was on the right. I took the last of half a dozen parking spots and got down to business taking my boat down off my car’s roof.

The concrete dock seemed like it was mainly used by pedestrians and bikers but there was a short flight of stairs down to the water. It was a very civilized launch. I scootched out into the water and started paddling, careful to avoid running over the lines of a couple kids fishing from the end of the dock. This area of the bay was crowded with moored pleasure boats, both sail and motored. I turned left to make my way around the southern tip of land occupied by the Yacht club and paddled out into Long Island Sound. 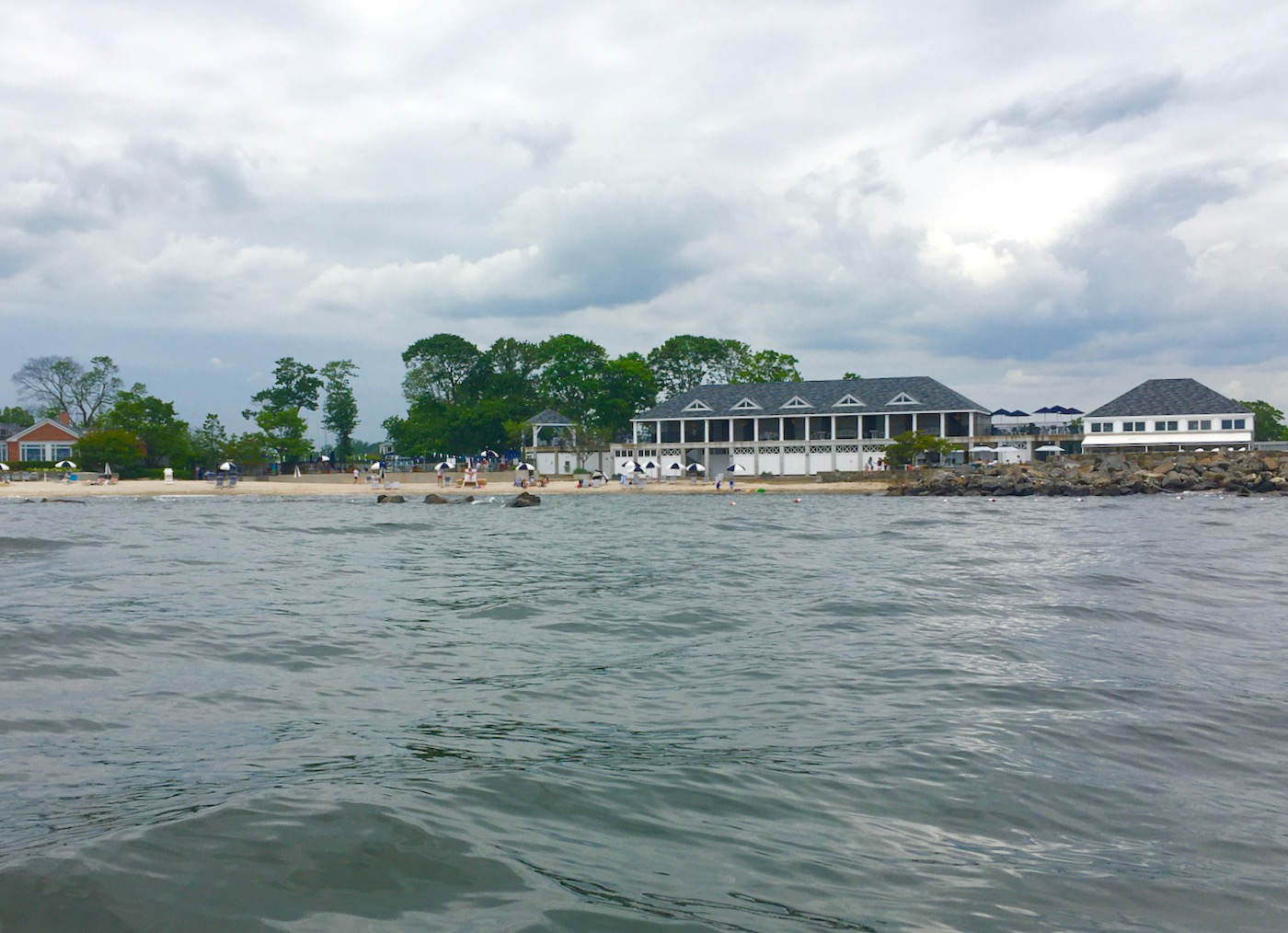 The sound was choppy but manageable. Now the Yacht club was on my left. There was a restaurant with some well dressed patrons socializing on the patio, a beach and a long line of individual cabanas. It took a few minutes of paddling to leave the Yacht club behind. North of it the shore was lined with even more profound displays of wealth, one giant house after another in a variety of architectural styles. I kept on ahead, paddling north now. In the distance I could see Rye Playland, it’s Ferris wheel sticking up into the sky above the surrounding buildings.

Maybe halfway between the yacht club and Playland, I encountered another kayaker on his way south. We paused briefly to chat about paddling opportunities in the area. I filed away some local information for future trips and continued on. It was a cool afternoon and overcast and the sound was pretty choppy but I was having fun. I still wanted to check out the bay, so I didn’t paddle all the way to the amusement park. When I turned around to head back south I could make out the Throgs Neck bridge and NYC skyline on the horizon. That was pretty neat.

Before I knew it I was passing the yacht club again, this time on my right. I steered back into the bay and turned right to pass my launch spot and explore a little more. The houses on the bay side weren’t quite as gigantic as the the mansions on the sound; one of them almost looked like something I might be able to afford some day. As I proceeded north again I noticed what looked like a golf course on the west side of the bay so I crossed over.

I had to pause halfway to let some traffic pass by on its way to another marina at the head of the bay. It was indeed a golf course, the Rye Golf Club. I paddled up close and lingered a few minutes to watch some folks teeing off. After that I spent some time exploring a marshy wildlife sanctuary on that side. I came across a family of geese but couldn’t spot any more exotic looking fauna.

Once I was done with the marsh I pointed my boat east again. Out in the middle I noticed that there were a bunch of swimming docks moored amongst the boats. Some were just simple rafts but others had picnic tables, grills and other stuff stored on them. One had a couple kayaks lashed to the deck. Interesting.

It seemed like Milton Bay had a party scene happening. As I made my way back towards Rye Town Dock, I spotted a raft with a couple hanging out on it in lawn chairs with a boat tied up alongside and a dog standing watch.

I paddled over and said hello and asked about all the rafts out there. They were really friendly and confirmed my interpretation. “It gets pretty lively when it’s warmer in the summer,” he said, “Fourth of July is a big deal. They do fireworks… I think it’s on the third this year.” I thanked them and moved on.

Before I knew it I was back at the dock. A woman was standing on the steps, making her boyfriend (husband?) take her picture. It looked like she was gonna be while so I landed by the rocks next to the dock and slid my kayak under the railing. Stowing my gear and car-topping my boat only took a few minutes. 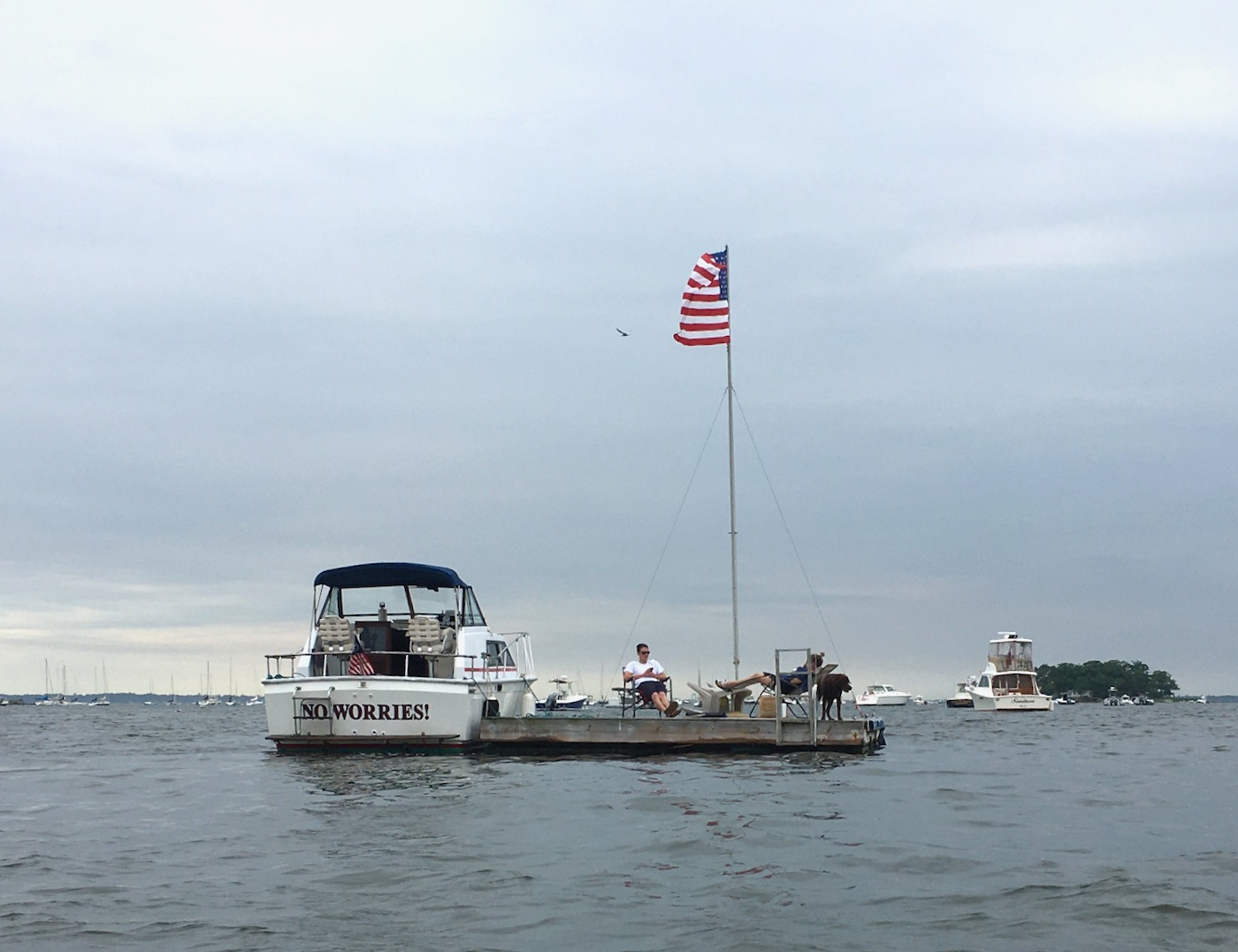 As I was getting ready to take off a sailing class arrived back at the yacht club in a bunch of tiny little sail boats so I paused to take a few more pictures. Then an older guy rowed up behind them in a fancy looking stained dory. That deserved a quick pic too so I lingered a bit longer. When I eventually got on the road home, it was with a satisfied feeling. It’s always fun exploring new areas.

9 comments on “Kayaking in Rye NY”