In New York this season, the snow has been piling up. Still, many of our weather events have been close calls. Last Wednesday a storm brought snow and sleet to much of the east, but this time it was all snow at Gore. My first shot at it was Friday, with a forecast of mountain snow and valley rain.

On the road from the flatlands before 3am, I arrived the cabin at 7am, unloaded the car and turned on the heat. Back down into town, I had breakfast at Sarah’s and then headed over to the Ski Bowl Yurt to boot up for first chair.

I’ve been busy at work, and I neglected to find a ski partner in advance.  Still the ski gods smiled down and sent master trailbuilder Steve Ovitt and his friend Rick to meet me, as I waited for the Hudson Chair to spin. A stroke of great luck.

As we loaded the lift, Don told us that any untracked at the the top of the Bowl was skiable, but farther down it was more wet and variable. We started on the trails, skiing the ungroomed sides of Moxham. We worked our way across hitting JJs, Hudson and the Ski Bowl Glades.

There are many reasons to like the North Creek Ski Bowl. The parking, the yurt, the people who ski there, the vibe. Another bonus feature is proximity to Burnt Ridge via the Eagle’s Nest traverse.

Burnt Ridge has become the part of Gore that I think about when I’m daydreaming at my desk. It’s unique among the eastern areas I have skied. A beautiful chair lift that serves an epic groomer and four mile-long glades. For the most part they are gently pitched, and I often find I am in my zone.

Barkeater was in prime shape, it was soft and the cover was good, over the entire length. I’m starting to get more comfortable in the trees cranking modified parallel turns and I was having a blast. Even though I didn’t personally meet Plake at Plattekill, I studied the images of him skiing and I think I really got something from it. He’s so centered and at ease.

Rick had a brand new pair of Voile Vectors in his car, and he wanted to tour with them. By this time, it was lightly sprinkling on-and-off at the lowest elevations. The plan was to ski a bit of lift-assisted side country, over to Rabbit Pond and back to the chair from there. We ran into Brant Lake Ed, who wanted in on the adventure.

I thought the idea was suspect, as things were beginning to clump up. But, apparently, everyone knows that “F4” is the solution. Fortunately, I’d was skiing with some knowledgeable and well-prepared skiers.

Steve had extra pair of Voile V6s in the truck. He waxed them and handed them to me for the tour. I was pretty excited, as skiers I know, rave about the Chargers, Charger BCs and the V6. All three are big rockered backcountry skis with a pattern.

Following Steve, we headed off the the top, down the trail, and into the woods. We climbed for just a bit and then descended quite a bit more. It was pleasure. The wax was working and we were making fun turns.

Our final run was down to becks Tavern. Back to the top of Little Gore to find our line. Looking back, I’m not sure exactly how we did it.  While I believe free heels are a must for all theses routes, this one has a decent amount of pitch for a lift-assisted XCD.

I never made it to the top on Friday. It was comfortable out of the mainstream and it’s always fun when you defy convention wisdom and score. 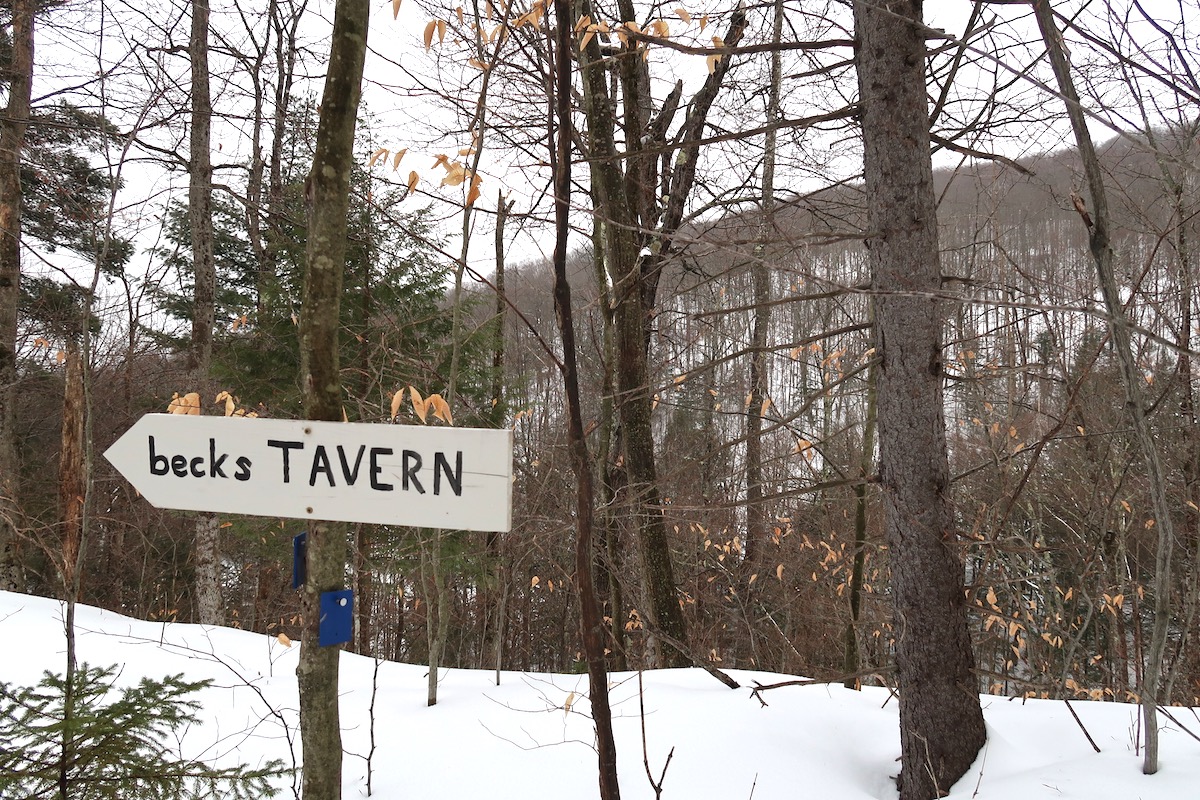 The funny thing is that this time the convention wisdom was actually correct. The best snow had fallen at the top, and the “best skiing” was there. (On Saturday I confirmed it myself on the Dark Side.)

At the end, I’m here to testify. It was a memorable day at the bottom and on the side. The Chargers climb insanely well, they glide and they are super-forgiving. Beck’s in North Creek NY is a cool bar, at the end of a ski trail. And good things happen if you are open to them.

9 comments on “I Never Made It To The Top”