Inspired by the conditions I found in the Siamese yesterday, and deterred by the holiday going on at Gore, I decided to “sleep in” and see what I could dig up in the woods for a second day in a row. I got up at 7am and by 7:45 was walking down Harvey Road with my BC skis on my shoulder. I jumped onto Garnet Hill’s trail system, and took Old Faithful to 4H towards the Garnet Hill ski shop. 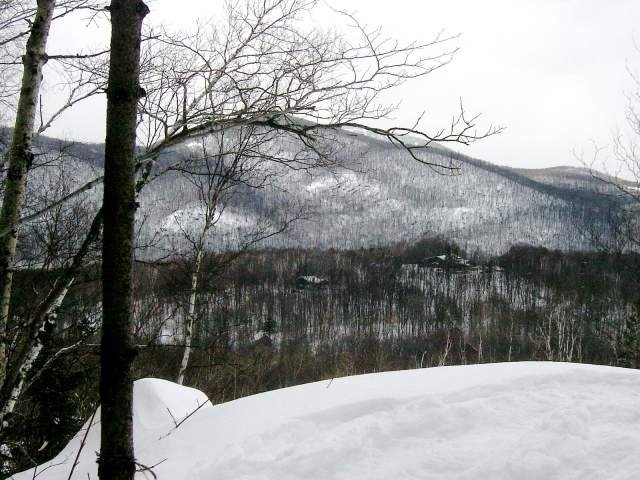 I was the first one on the trails, after the groomer, so I guess you could call it first tracks. The trails were in good shape. While skiing 4H, Mark and Julie, a couple of tele instructors from the area, popped out of a chute known as the “elevator shaft.”

It’s a nice straight shot, steep, and somehow it hadn’t been skied all week. I didn’t ski it, but it was cool get the vicarious thrill watching them hit it. We skied together the ski shop, and I tried to convince either or both to head out with me. Julie had to work. Mark said he could give me 30 minutes.

We went up the trail to the old mine, it’s about a 400′ climb. We checked out the view, and then Mark headed down. I watched him disappear, linking turns back and forth, across the trail all the way down. I headed off towards William Blake Pond on my own. I didn’t know exactly where I was headed, but I did know I didn’t want to ski the same thing I’d done yesterday afternoon. Before dropping into the pond, I headed East, off the trail, toward the summit of Harvey.

Harvey is an oddly shaped mountain. I think it was originally huge, and maybe even part of Gore, before a glacier whacked it. It’s shaped like an “T.” The true summit is at the corner of the T. At 2500 feet, the summit is a nice enough spot with thin trees and views of Gore. But the most dramatic parts of Harvey are down at the far end of the of one of the arms…cliffs, great views, including view of the old Harvey Mountain Ski Area. 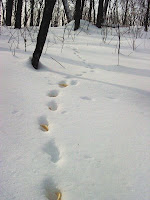 And at the base of the cliffs there are some great steeps for skiing. Going along the top of the eastern arm of the mountain you ski on a ridgeline that is maybe 15 feet wide with drops of 200′ down each side. It’s great stuff if you like that kind of thing. Going for the top, alone was a bit questionable. I’ve skied alone in the woods many times, but since I didn’t really plan to do any backcountry this weekend, I didn’t really have a proper pack, just a butt bag with a few essentials. I figured I’d go for a bit and see how it went. I set my turn around time at 10am.

I climbed around the northwestern, lowest knob of the mountain, and after a little thicketeering, got into the wide open hardwoods. I’m not sure why, but there is a lot of room back there. The trees are very well spaced. Maybe a fire thinned it out. As usual, there were bobcat tracks everywhere along the ridge.

You can actually use the cat tracks to find the easiest way through, as the cats seem to know the best route through the densest stuff that you encounter at the beginning of the bushwhack. The skiing was so easy and pleasant. You were basically on top, sinking maybe 8 inches, and there really was no crust or sound from the snow. The reports indicating that North River didn’t get the rain that fell in North Creek last week, seemed pretty accurate.

I made the top at 10:05, snapped a few pics and headed back down in my tracks. If you’ve got the whole day, the thing to do is drop off the southeast face, hug the cliff bottom on the southeast side and then come down the northface. It’s pretty steep and you get about 500′ through hardwoods. From there, you can reconnect to the Garnet Hill trail system on Joe-Pete, one of the expert trails. That’s the “traditional” circuit of Harvey, but I’d have to leave that for another day. I had to get going. 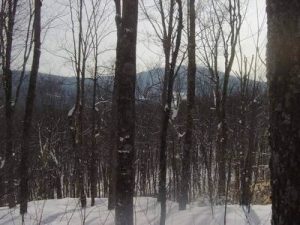 What took an hour and a half to get up, took about 20 minutes to get down. On the way back down from the mine, I tried to do “powder 8s” with Mark’s tracks. Not easy with 205s and leather lowboy boots. But fun as hell. I skied back down Old Faithful, and took Solitude (a personal favorite) to Cougar Run, coming out at the North Acres farm.

From there it’s about 100 yards up the road back to the cabin. I had lunch, drained the pipes, and headed out. I was surprised that there was no traffic on 87 at all. I guess everyone is sticking it out until tomorrow. Back in the downtown flatlands, I’m glad I skied hard for 3 days. Time catch up on NYSkiBlog, and wait for the beginning of Winter, Part 3.