I got to the mountain at the same time as yesterday. Instead of being totally alone in the base lodge, there were maybe 50 people inside. The holiday was on. At the top of the Gondi, there was no waiting at the rope – for the second day in a row, I was first down Pine Knot. 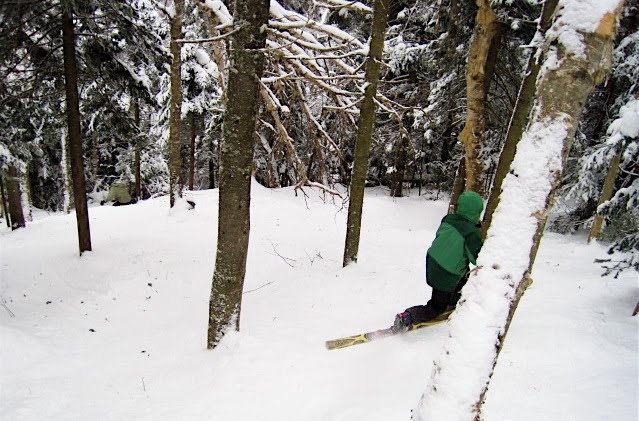 I hit the Pine Brook glade on the way down – as good as yesterday really, except for a few spots you had to jump over. When I got to the Straightbrook chair it wasn’t open. I waited.

Marc, the head of ski patrol, and Howie another patroller, ski up and wait with me. On the way up he “recommends Chatiemac” all the way down. I told him I was headed for the Straightbrook glades, and he repeats… “all the way down.”

They had been blowing on it all night,and they still were. It was 5 below last night and the whales were ultra silky. I mean it’s not a “natural” experience in any way. But it sure is fun. It’s how I imagine surfing would be, if you were good at it. I got first tracks on Chati and probably 10th tracks as I had to repeat it. One the second run I hit the SB glades at the end, and they were better than yesterday. Or maybe I was better, not sure. I did the bumps on double barrel, as a tribute to joe-the-bumper.

Then, of course, I had to get over to the Dark Side. It was the best yesterday, and I wanted to be there first. Funny thing about Gore. A large percentage of the skiers who ski the top do exactly what I do…Gondi to Pine Knot or Uncas…ride the Straightbrook chair and then eventually move over to the Dark Side. By being insanely early, and by spending a little bit less time over on the front side, you can get over to the dark side close to “first.” Does close count in skiing?

By the end of yesterday, the word was pretty much out. The north aspects had the best snow. But I wanted to see what was left over there. Lower Steilhang wasn’t open so, except for that, I went in order…Hullabaloo to the Dark Side glade, then the glade on it’s own, then Darby into Darby Woods. Some of the turns under the lift were bullet proof – blue snow. Darby Woods had the most untracked and loose snow on that side. Sometimes, it seems, the most obvious things get ignored. 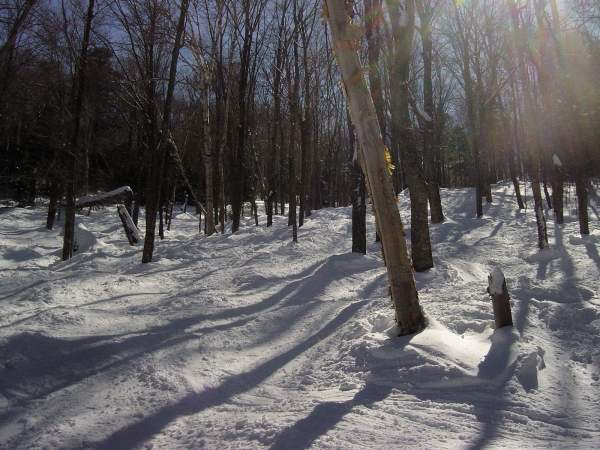 I hit the Mineshaft glade and switched back to the front side. It hadn’t seen the traffic and had the best natural snow of the day. Actually the Chatiemac glade still had some untracked too. Just keep skiing until you find it. I vowed that before I went down to Topridge, I was going to find Top Secret without anyone’s help. I skied slowly, scrutinizing, and jumped in at the right moment. One thing is true, when things have been skied pretty hard, the homemade stuff is harder than what is on the map. Fewer line choices in the homemade…and it gets FAST in there.

I hit Tahawas glades, High Pines, The Cave and called it a day. I skied down to the bottom and for the first time saw the amazing zoo that is the base area on the busiest day of the year. It was only 12:45.

I bought lunch in town at Sarah’s Cafe and headed back to the cabin. I changed, ate my sandwich and put a butt bag together for some backcountry. Actually it’s what we call the backyard up here on garnet hill. I drove to the lodge and parked as far from the ski shop as I could. On the busiest day of the year, I wasn’t not a paying customer and I didn’t want to use up a valuable parking spot.

I headed up to the old Hooper mine…probably a 600′ climb from the ski shop. The view up there is sweet. Thirteenth Lake, the old mine, the new mine, the lodge, the Siamese. Back into the woods and over toward William Blake pond. It’s rolling and very pleasant back there. Mostly hardwoods with lots of space in between. You head across the ridge line on Harvey Mountain.

It’s so quiet up there. 800′ below families are learning to xc ski and there is a buzz, but you can’t hear it up top. Over to William Blake Pond and then up to the beaver swamp. It feels so far away. Past the beaver swamp…you really shouldn’t be going out that far with just a butt bag. It is the wilderness, and skiing solo…well I was breaking my own rules.

I decided I go to the height-of-land between Gore and Garnet, and turn around. I decided turn around time was 4pm. I know how ridiculous that is. At around 3:30 I ran into the Gore-Garnet trip. I couldn’t believe it – 5 hours to ski back from Gore. Seemed slow to me. I was considering joining this ski on Sunday, but if they aren’t getting back until 4pm, I need other plans. Apparently they’d had an incident, and someone had to be evacuated, and it slowed them down. I knew a few members of the group, and had to yak for 10 mins. They headed down and I pushed onward, up to the height.

I just love it up there. I learned how to turn, on long straight skis, between trees up there. They are far enough apart to learn. We called it the playground. Right after the height, I paused, took some pics, and turned around, 15 minutes before my turn around time.

It’s a hoot on the way down past William Blake Pond, when the conditions are right. It’s not fast, but I forgot how much fun it is. Step turns, herringbone, sidestep traverse, BC skiing is really liberating.