Ski Day 6: I have this friend James. He says…tele is too much work. “Why do you want to work so hard? Just have fun like a normal human being. Come over to the dark side of the force…” 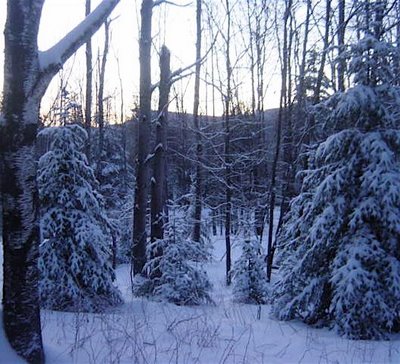 For starters I overslept this morning, in response to the whuppin I took yesterday. When you’re going skiing and you wake up…because the sun woke you up…well that’s too darn late to be waking up. It was zero degrees at 7am and perfectly clear. An inch of superlight fluff had fallen overnight. I had a cup of Joe, grabbed my gear and headed down the hill. 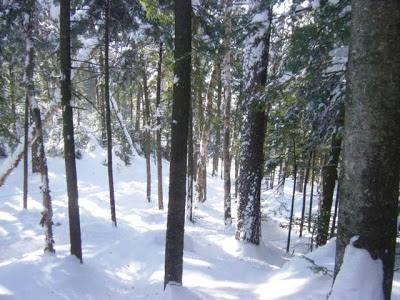 I got a $9 spot* in the lot this morning. There were maybe a hundred cars. Fewer than I expected, on a Saturday, when Gore may have done better in the recent storm than any resort outside of Northern Vermont. 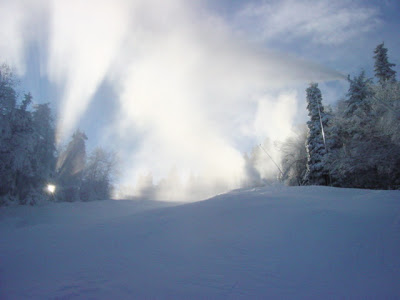 I was in the third Gondi. Again it went right of at 8:30. I’m seeing a pattern there. Again in the Winter 08/09 pattern, the top was closed. I did two runs on the bottom. Like yesterday’s first tracks Sunway had the best surface. On my third run Pine Knot was open. I was surprised to see the rope down on the Pine Brook glade. 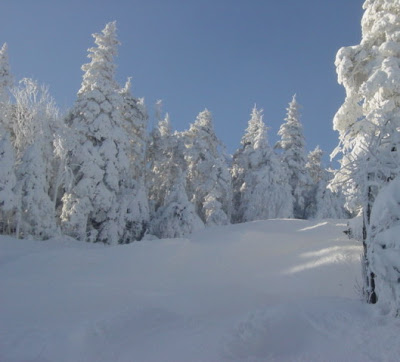 Huge whales were everywhere, no gak to be found. It was great if you like sweet manmade in big whales. I do.

It was fun to get in the trees, but it was also thin. Amazing what having a new pair of skis at home, in the wrapper, does for your courage in thin cover. Down to the Straightbrook Chair and it was running. Hawkeye was open. They were absolutely pounding the entire run.

I hit Hawkeye three times. On my third run, I ran into Mike from Igerna. They dropped the rope on the run under the SB chair…Mike said it was excellent. It’s all natural cover, and in I went.

I convinced Mike to let me shoot him coming down the side. A total ripper on Karhus. Fun as hell to watch, hard to catch.

I did Headwaters which had none of the loose soft stuff on the side, that it had yesterday, it had been all groomed out. I continued my cruise down Tannery and rode the Topridge chair. I noticed Uncas was opened on the ride up. It was too thin to be open. Thrilling in a good and bad way: 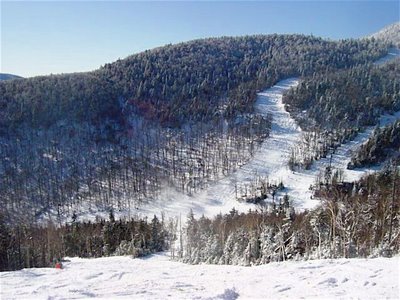 I rode Topridge again, with a couple of alpine skiers. They said the North Chair was running, so I took Ruby Run through the saddle to see what I could see. The “expert” warning sign on a blue trail …hmm could it be a sign that there is ungroomed in there? Maybe the Tahawas Glades were open. 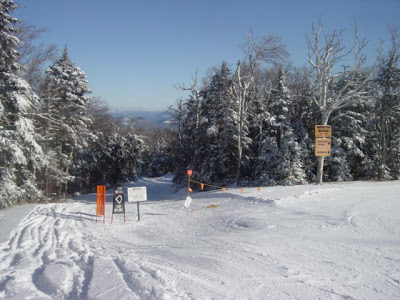 They weren’t, but Tahawas itself wasn’t groomed, and there were some opportunities there. There’s not a lot of pitch, but enough to make 8 inches of snow fun on teleskis.

I stopped in at the saddle for lunch and to warm up. On the way out… I tried Tahawas again…hoping I could be one of the first into the glades. Still closed. Back up the leisurely North Chair and through the saddle…I skied up to the ski patrol’s drive-up window. It’s cool…there’s a guy in there who will flip open a little window up and answer questions, without having to take your skis off. 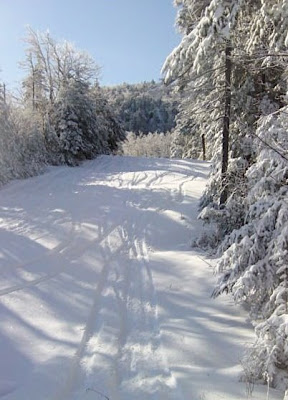 “Are the Tahawas Glades going to open?” “Well…they could be open now, we just have to rope off the work road so noone ends up on Twister. You know your way around back there?” “Yes I do.” “Go for it then. Take one run and come back here to check in when you are done. If a patrol sees you tell him Jeff said it was OK.” SWEET. A get out of jail free card. I went: 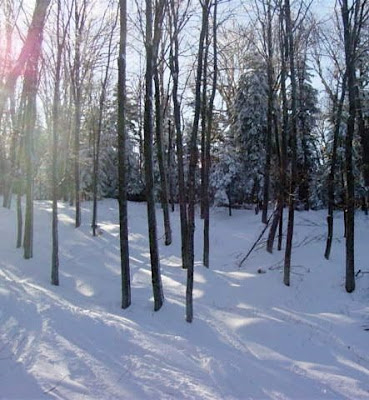 Maybe 10 people had been through. While clearly the “best” or easiest skiing was in the soft loose snow that was in tracks of the patrols who had been through…I couldn’t resist making my own tracks. I was coming to fancy myself a crust buster, working for the better of all. 🙂

Down to the Gondi and back to the top. I was going to take one more shot at Hawkeye and the run under the chair. It was actually easier than it was earlier. My smear turns are easier to execute when it’s been packed out a bit. Coverage was still decent. It was 2:30 and I’d skied from the opening bell minus 20 mins for lunch. The plan was to go back to the top, take the easy way around, down to Tannery. Maybe hit Showcase and call it a day. Then…on my way down I saw this: 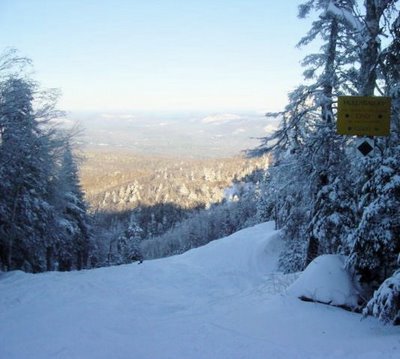 Hullabaloo was OPEN. With no chair serving it…I’d have to go all the way back down to the North Chair. Hmmm. A teleguy blew by me.

It was the pick of the day. Big soft piles the whole way, except that the headwall was a narrow chute of death. I showed a terrified girl how to take a traverse on it to make it manageable. I did the same. 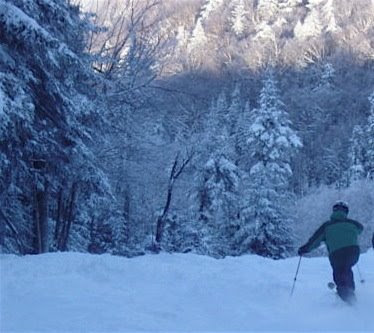 Rode the North back to the saddle. Showcase …fantastic high speed turns with almost no one on the trail. Then… Sunway off the Triple and I finished with a ride to the midstation on the Sunway Chair, carving turns right down to the parking lot. 8:30 to 3:30. Not bad for an old-ish teleguy.

Great job by the mountain today opening a bunch of natural snow terrain. While cover was thin in a few spots…I love taking the responsibility in exchange for getting at all that natural snow.

Snowmaking Note: They pounded Hawkeye, Chatiemac and Twister all day. *Note: Still no charge for parking. My arbitrary parking spot dollar values are interpolated between 0 and $10 and are approximate.