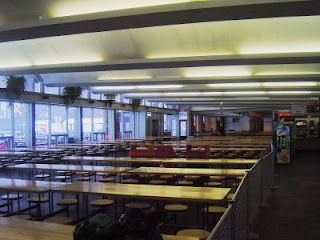 I scored. After debating the decision to burn all that gas on the drive up, I went for it. And Gore was great today. Put it this way, not everything was great, but a lot of it was. Enough to keep me busy and smiling. I decided to take pics today for the first time in forever. My first picture was a completely empty base lodge at 8am. I sat in there, by myself, amazed that I was alone. I caught the first Gondi.

At the top, as usual, the summit was roped off. I went down, taking Twister, in the hope that Twister glade would be open. It wasn’t and that was probably for the best. Do I really have to go into the crustiest glade on the mountain without a warm up? If it was open, I’d a been in there.

For the hell of it, I took 1A over to Showcase. It was ungroomed and it’s short. I thought I could see the worst of it – the ungroomed at low elevation. It was tough. Serious crud. Doable but a lot of work. Rode the Gondi again. Fox Lair to Showcase. It was ok. I did a third Gondi – this is my new thing – I warm up – but only IF the summit is closed. Right as I got off my third Gondi…they dropped the rope on Pine Knot. I did Pine Brook glades. My first real test of the conditions higher up. Much less sleet and much more turnable.

On to the Straightbrook chair. Chatiemac and Hawkeye were about like Pinebrook, packed out enough to break up the crud, but still soft enough to be fun. Straightbrook glades were only OK. Double Barrel, and Lower DB as I call it, were primo. Room to turn, carvable bumps. I worked over to the Dark Side. It was like no ncp had fallen. Soft everywhere. Hullabaloo, the Glades, KHS, Darby – almost everything on the map was open and soft.

I only ducked one rope all day. When I got to the DS lift, The cool lifty with the glasses down there says to me … “they just dropped the rope on Lower Steilhang.”

LS hadn’t been open for over a week I think. It was over a foot of consistent dense “powder.” So soft and smooth. You KNEW that there was bulletproof down there somewhere, but for two runs, I went light on my feet, and never felt it. 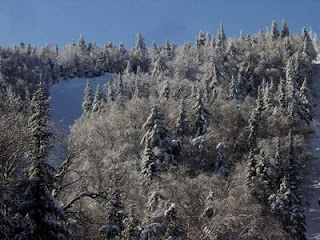 I worked that side backwards and forwards. Open Pit and Lies were nice, the headwall on Rumor was primo due to three days of non-stop manmade. The “easy” part, below the headwall, was icy death. I had lunch at the Saddle, took woodlot back over to the Dark Side, and worked it again. A sorta freaky thing happened in Mineshaft. The sun is finally coming out, and I’m *trying* to take some quality picks in the trees. A tele-guy comes up and asks me if I was Harvey. I guess he knew me from firsttracksonline or skiadk. It was Jeff.

Jeff and I skied together. More Mineshaft, Tannery to Topridge and into the Cave. There are some stumps in there but when the snow is this deep you can launch over them. Great conditions, and it’s great to ski with another tele guy.

High Pines, under the Top Ridge chair, spanked me. It was low enough in elevation to be cruddy. I actually think that maybe aspect or something came into play. The stuff that was great wasn’t really higher than some other stuff that was only ok.

On my way down I hit Twister twice. The first run, Twister glades were open. As expected they were really tough. And I was beat. I skied from 8:10 until 4pm with 20 mins for lunch. Today was a great day.