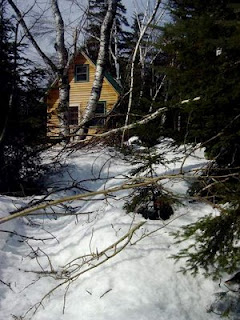 This is more of a Bomb Damage Assessment than a TR. I got up this morning in the flatlands when the baby woke up around 6:45 am. I fed her, and ran some Elmo while I packed, then gave her to her sleepy mother. I got off by about 8 and to North River at 1pm. No stops, no food, no nothing.

I really wanted to see the damage from the storm that took out power for 4 days here in Johnsburg. According to National Grid, 990 homes were without power for most of those 4 days. I’d be surprised if there are 2000 homes total in the whole town. (Johnsburg is 200 square miles, and over half wilderness, and maybe another 10% is Gore.)

I was pretty anxious driving up our road. As you got above 1500 feet, down trees and saw dust were everywhere. At the bottom of our driveway, the remains of two big white pines that had been cut up by the power company. Farther up there were three more I had to cut through. The path from the end of the driveway to the cabin had 4 or 5 more.

Somehow, both our buildings sat there untouched. I had heard from our plow guy that “I survived” but I was still nervous as hell walking up that drive. 4 or 5 big branches were on the ground within a few feet of our main building. It’s a bit ridiculous I admit…we’ve got 5 acres, and if we cut down all the trees within 60 or 90 feet of both buildings, we wouldn’t have nearly as many trees. Roger, my plow guy says…”you can always tell the flatlander houses, they won’t cut down their trees.” So I’ve sized up every tree and branch that is close to the cabin, to decide if it would do damage if it fell. Crazy flatlanders.

I cut downed timber for about an hour and a half, to get the CRV up the hill and to clear the path. It was 2:30 and I realized that with the sun and temps in the upper 40s…the corn over at Gore might be better this afternoon than tomorrow or Sunday. I threw my gear on and drove to the hill. I was surprised how many cars were in the lot. I heard a lot of French and other languages in the base area. Still there were no liftlines.

I got 5 runs in, in an hour. Pine Knot, Hawkeye, Cloud, Showcase and I finished with Twister at 4pm. The top was better…devoid of those really wet spots that can stop you dead. It was colder up there and the added pitch seems to drain the excess water better. Conditions were pretty darn good. Carvable corn. I haven’t really skied corned up groomers too much in my career. In fact I’ve done more corn groomers at Tahoe than in the east. It’s was hard work teleying…but I knew I only had a few runs so I hit it hard. Above 2500 feet, the trees were really ravaged. Some aspects were worse than others. Actually I expected worse, based on the damage I saw over at our place.

I’d be very surprised if there was any more tree skiing at Gore this year. It makes me wonder too if the mountain will have the budget to clear it all out this summer. Looks like I may have misled joe on the Gore bump contest. I didn’t see anything that looked like a bump run on Hawkeye or anywhere else. What I did see was a bunch of snowmaking equipment lined up on Hawkeye, with no snowmaking temps in sight. Not sure if I’ll ski tomorrow or not. I got a bit more work to do with the saw. Then I’ll either take off, or ski a few hours and book. It’s been a long day.