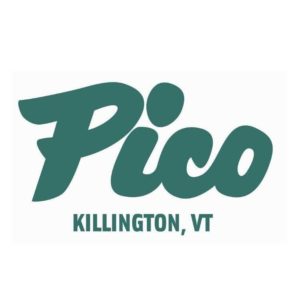 Pico Mountain Ski Area is in the town of Killington, VT. Established in 1937, it was one of the first commercial ski areas in the state. The base area is located on the northwest side of Pico Peak on Route 4, nine miles north of the town of Rutland, Vermont. In 1996 Pico Peak was acquired by Killington and in 2007 the mountain went to part-time operations (Thursday-Sunday).

Pico is often thought of as a smaller sibling to Killington, and given the size of the big mountain, that’s not an unreasonable assumption.  But Pico has a 3900 foot summit that would be the second tallest lift served mountain in New York.

The Pico Mountain trail map has 57 trails covering 20 miles and 7 lifts with a vertical drop of 1,967 feet.  Annual snowfall is listed as 250 inches, the same advertised total as Killington. The mountain is divided into six lift pods.

This little chair lift is the perfect place to go for a beginner on their first chairlift ride. This pod has 100 feet of vertical drop with has two private runs down the hill called Bonanza 1 and 2.

The trails from the top of the Golden Express cater to families with beginner and intermediate riders. This chair was built for the 50th anniversary of Pico and is their detachable quad serving the lower mountain. All trails lead back to the base of the Golden Express. The wide trails and gentle terrain help new skiers build confidence who’ve graduated from the Bonanza area.

Little Pico has some of the mountain’s toughest terrain. Advanced skiers will not want to miss skiing A slope, one of the steepest pitches at Pico, and on a powder day is a dream to ski. There are also a number of glades and very narrow trails not obvious on the map between C and B Slope.

There are less aggressive options in this pod including a calm and winding trail called “Bushwacker.”  Don’t forget to ski the B-slope cutoff which is a great trail to try after you finish all the terrain the Golden Express has to offer.

The Summit Express — which loads at mid-mountain — serves trails which run from the peak of the mountain and are generally steeper, expert terrain. At over a mile long, Pike is the longest trail that goes all the way from the summit to the base lodge. The views from the top are incredible.

The summit is not for the faint of heart and it gets windy up top. There is only one true intermediate way down on 49er and it is steeper than any of the other blue trails on the lower mountain. Make the trip to the top after you feel you are a solid intermediate skier. Since 49er is known as the easiest way down they blow a lot more snow on it, to do their best to keep the best conditions possible.

If you love glades you are going to love the Summit Express area. With five black diamond glades, all five have unique traits that make them special. Upper Pike and Upper KA have incredibly beautiful and sometimes tight pine trees. Birch Woods has a more gentle mixed and spread out forest.  There is even an intermediate glade called “Mid-Pike Glade” that is a great introduction to glad skiing for first-timers who are confident in blue terrain. Sunset Woods is a favorite, not because it is the hardest, but because it is the least skied and one of the longest. It’s beautiful and you’ll feel a million miles away from everything when you ski these trees.

The steepest and most sustained steeps are undisputedly Upper Giant Killer. On a powder day it’s glorious. There’s a long runout, but it is worth every second, especially if you opt to take the “Poma Woods.” When you ski by the old poma station that went up the incredibly steep terrain you will want to take a photo by this amazing piece of history. The glade has a trail going through it that is maybe 10 feet wide and a lot of fun since it bumps up is the second most gentle glade after the “Mid Pike Glades”

Skiing the all natural and ungroomed “Summit Glades” is an experience all in its own. Some of the best and biggest bumps with lots of islands of trees these two parallel trails are a dream for skiers who loves moguls. They feel like they go on forever and end in a beautiful runout that most skiers never touch.

You want to do the ultimate groomer? Go top of Upper Pike and take it all the way to the base lodge. The 2000 vertical foot nonstop journey is the best way to end any ski day.

Pico’s Outpost relies primarily on natural snow and is served by the Outpost Double, Pico’s oldest lift. This area has seen less use in recent years. The Outpost Chair was built for expert skiers, and while it is only 500 vertical feet, it has a fantastically consistent pitch all the way to the bottom. With four trails and two glades, you can spend all day on this one double chair, and some skiers never want to leave. It is one of the best powder day pods anywhere and skiing under the low double chair or in the nearby woods is always a thrill showing off to those on the lift.

In the past, Pico has always been hampered by their water imitations. In 2019, a new 16,850 foot pipeline was installed to connect Pico to Killington’s significant water source. This investment doubles Picos snowmaking capacity helping the mountain open earlier and with more capacity for the critical Christmas vacation week.  In addition, 9,418 feet of  trail side pipeline and a new pump were installed. The $2.1 million dollar price tag was the largest investment in Pico in over 20 years and shows that their owner Powdr Corp sees the value Pico brings to their portfolio. 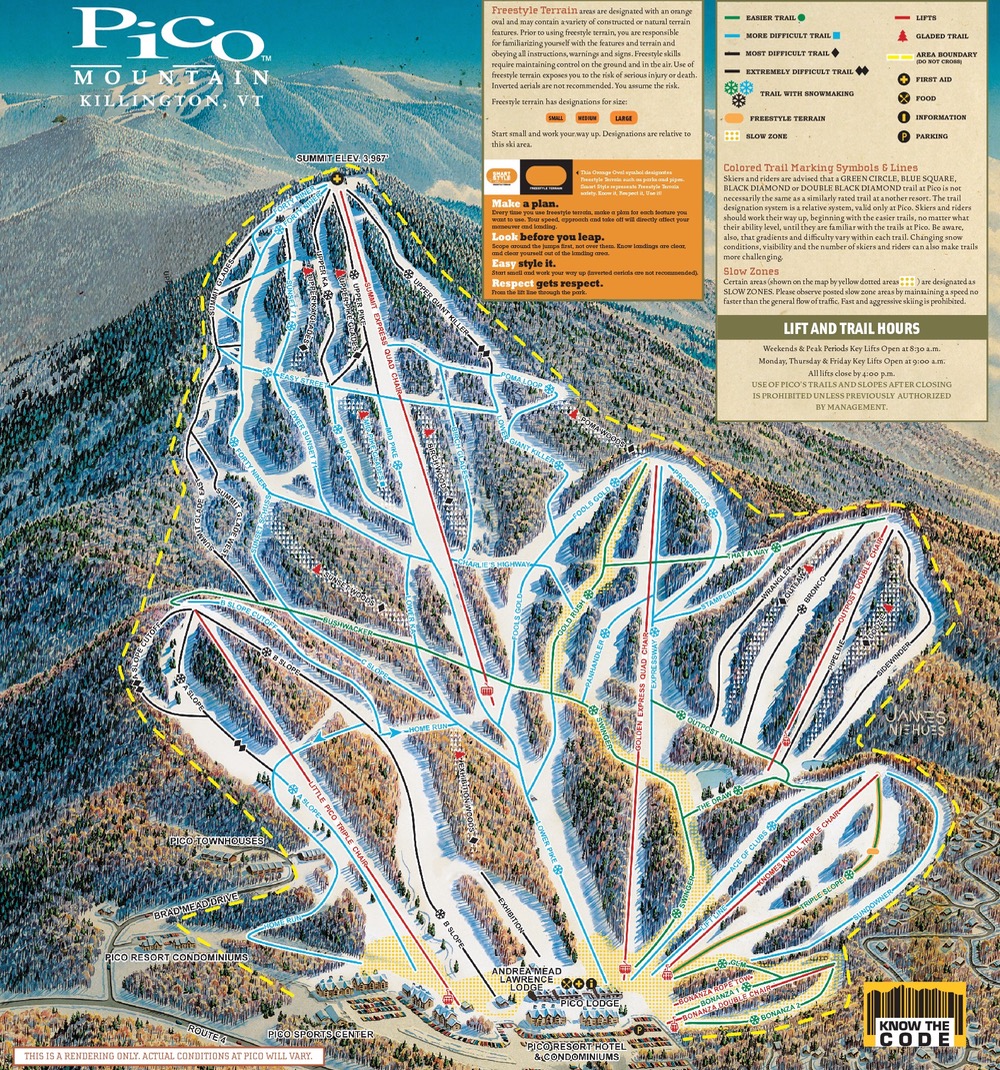