The Beast of the East. There is perhaps no better phrase to describe Killington. The largest ski resort in the east, the longest season in the east, vertical drop over 3000 feet, a World Cup race are just some of the stats that stand out.

While the size of the resort can be intimidating, it also means that the Killington trail map has something for everyone. With the many different base areas, peaks, and aspects, Killington is like multiple ski areas in one.

Ramshead is one of the mellower sections of the mountain, and a favorite for families. It has its own base area and lodge and the ski school is based here. There is one high speed quad lift, serving several novice and intermediate trails. There is also a terrain park, called the Woodward Peace Park on this part of the mountain. From the top of the lift, one can take the Caper trail to access the K1 Base. This area tends to be crowded on weekends, and lift lines can be long since there is only one lift.

Snowdon Mountain used to be considered a pass through area between Killington Peak and Ramshead, marred by a disjointed trail system, multiple dangerous intersections and a pair of slow lifts. However, this isn’t true anymore.

In the summer of 2018, the sector was completely revamped. A new 6 passenger bubble chair replaced the Snowdon Quad, and the worst trail intersections were rebuilt with tunnel crossings to improve skier flow. The result is some great top to bottom cruising runs, a few steeps, and some glades served by the most luxurious ride on the mountain. From the top one can also access the Canyon and North Ridge areas, or ski down to Ramshead.

Adjacent to Ramshead and connected by a tunnel under the access road is Snowshed. This area is home to the easiest terrain at Killington, all rated green. The Killington Grand Hotel is located at the bottom, as is some other lodging. There are two lifts, a high speed quad and double chair.

From the top of Snowshed, one can access the K1 Base via the Highlander trail, or the Needle’s Eye area via the High Road trail. One can return to Snowshed via the Learn to Ski Area trail from K1 Base, or the Northbrook Quad lift from the bottom of Needle’s Eye.

K1 Base is the highest elevation base at 2500 feet. As such, it is the first to open and last to close during Killington’s long season. While the lodge is considered old and run down by many, a new lodge is currently under construction, to open in the 2022-2023 season. The K1 Gondola takes you to the top of Killington Peak, the highest lift served point in Vermont. From here, one can ski to any other lift on the mountain. There are intermediate trails such as Great Northern, as well as expert trails such as Cascade and Downdraft.

There are also two other lifts in this area that don’t quite reach the peak. The Canyon Quad allows experts to lap most of the steeps without returning to the base. It’s a good way to avoid lift lines on peak days. There is also the North Ridge Quad, which serves some high elevation intermediate terrain. It’s also the first lift to open in the east each season, often in October. When a skiable route to the base is not available, skiers use a set of stairs called the Peak Walkway to return to the K1 Gondola for downloading.

This is where it gets more confusing. Needles Eye is not actually a base area as it has no parking or lodge. It’s just a valley where several trails and lifts converge. The larger area it’s part of is Skye Peak. This is perhaps the hardest peak at Killington to understand. Three lifts terminate at the top. The Skyeship Gondola runs right up the middle, and you can catch it from Skyeship Base on Route 4, or from Needle’s Eye. Also starting in Needle’s Eye is the Needle’s Eye Express which runs parallel to the Skyeship Gondola but doesn’t go as far. The Northbrook Quad connects the bottom of Needle’s Eye to the top of Snowshed.

The Superstar Express serves the face of the peak towards K1 Base. The Superstar trail is one of the most famous in the east. Not only does it hold the World Cup races every Thanksgiving, but it is piled deep with snow, known as the “Superstar Glacier” to allow for skiing into May and June. It’s always the last trail open on the mountain. The third lift that ends at the top of Skye Peak is the Skye Peak Express. It runs from the Bear Mountain Base. All the terrain off Skye Peak is generally upper intermediate (steeper than Snowdon or Ramshead) to advanced. The exception to this is Great Eastern. It’s a “peak to creek” run that meanders its way down to Route 4 and Skyeship Base, descending over 2500 vertical feet.

Skyeship Base is the first base area that one sees when arriving from the east. As such it is popular with visitors from the Boston area. It’s also typically the least crowded, and can be useful when one is arriving late, but still wants to park relatively close to a lift. The Skyeship Gondola is the only lift from here, running in two stages to the top of Skye Peak. Due to its low elevation, this base area has a shorter season than the others.

The last base area is Bear Mountain. This area is perhaps best known for the Outer Limits trail. This fearsome run is the steepest on the mountain, and always has the biggest moguls. It’s hard to miss as the whole thing is visible from the lodge and parking lot. Every spring, it is home to the Bear Mountain Mogul Challenge. Bear Mountain is also home to the two advanced terrain parks at Killington, The Stash, and Dreammaker.

There are two lifts out of this base. The Bear Mountain Quad, while it runs directly up Outer Limits, does serve terrain for all abilities. The Skye Peak Express runs of course to Skye Peak. It serves intermediate terrain, the terrain parks, and is the main access from Bear Mountain to the rest of the mountain. Because of this, it can experience longer waiting times than other lifts at the resort. However, in 2018, a cross trail was added to allow access to Needle’s Eye from the Bear Mountain Quad.

There are two other lifts typically associated with Bear Mountain, but don’t start at the base, nor directly serve terrain on it. One is the Sunrise Village Triple, serving beginner terrain and real estate access off the Bear Cub trail. It used to be much longer, and extend all the way to Route 100, called Northeast Passage. Unfortunately, this was abandoned in the late 90’s.

The last lift is the South Ridge Quad. When the former Snowdon Quad was replaced, it was relocated here to replace a triangular shaped triple that was removed 7 years earlier. This lift was best known for the sudden turns it made halfway up. While the quad follows a straight route, and lacks the turn, it is a great place to avoid crowds. It directly serves a few trails, mostly relying on natural cover, and is also a shortcut from Bear Mountain to the Canyon and North Ridge lifts, without having to go through K1 Base.

Killington is part of the Powdr Corporation family of resorts, and is a partner on the Ikon Pass. It is easy to get to, via I-87 and Route 4 from the west, and I-91 and Route 100 from the east. With 5 base areas, 7 mountains, terrain for everyone ranging from the Snowshed Slope to Outer Limits, and the longest season in the Northeast, Killington, The Beast of the East, is a must-visit for all eastern skiers.

To see our front page coverage, check out our Killington Blog. 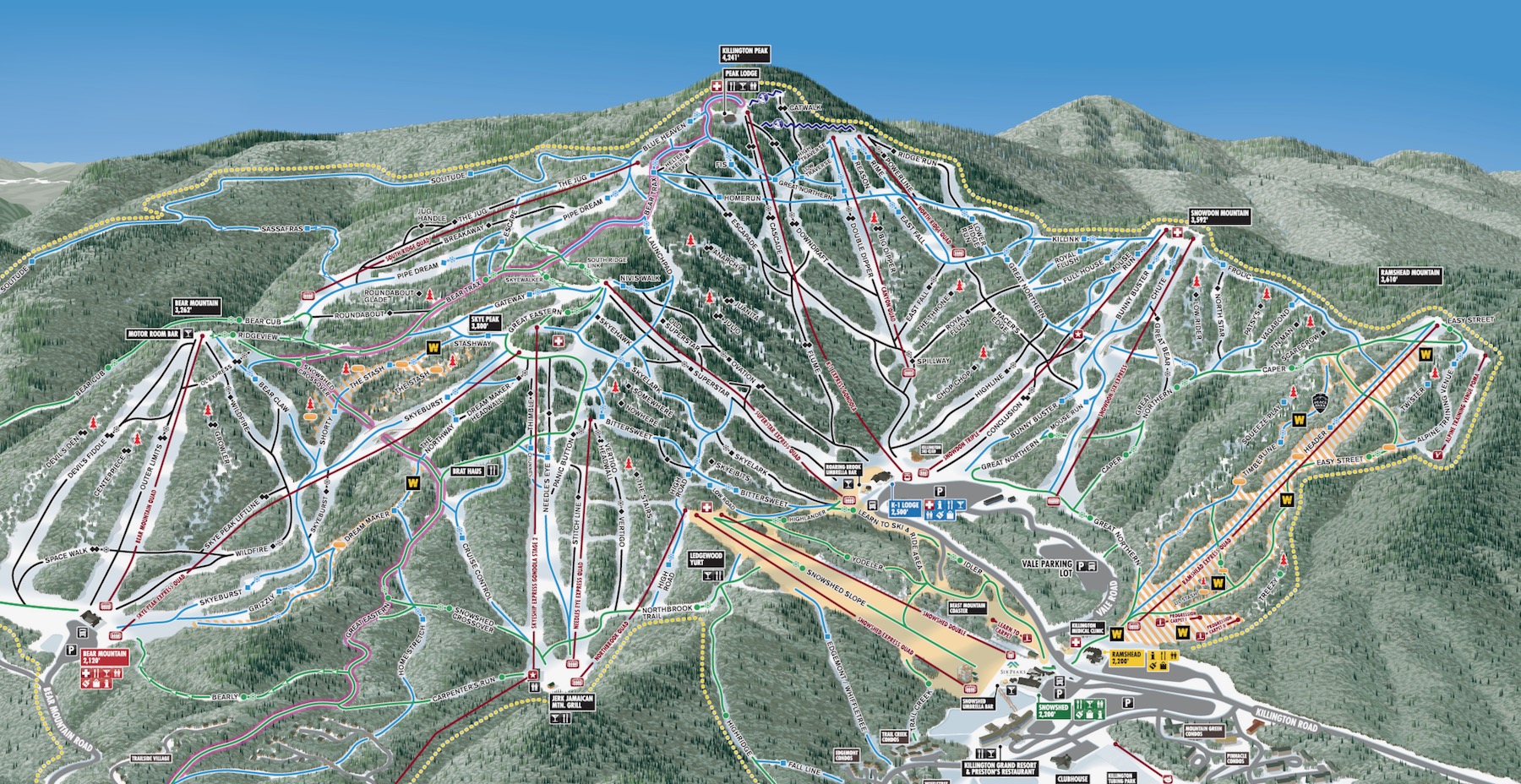